One of the four columns (i.e. "Army Lists") in the Congo rule book is for a trading group from the Sultanate of Zanzibar.  Long before Europeans became interested in the interior of Africa, expeditions from Zanzibar had been travelling there in search of riches.  Often, this involved slave trading; it seems that the Zanzibaris weren't particularly interested in increasing the wider world's scientific or geographical knowledge.

Of course, not all Zanzibaris were greedy traders in human misery, just as not all white men were morally pure.  But this lot are... 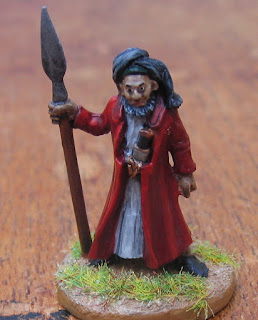 The leader of my Zanzibari slavers is a cunning, ruthless, old fox.  Yussuf al-Omani is not a nice person: he's sly and devious and you'd have to be very sharp indeed to get the better of him.  He runs his band with ruthless efficiency, but he's feeling his age now and has considered retiring when (if!) he deems his succession is secure. 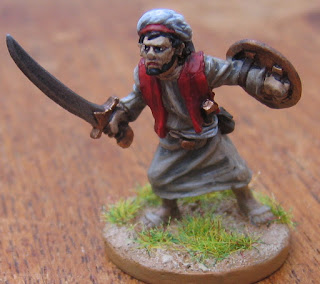 Abdulrahman ibn Yussuf is the boss's son and heir apparent.  He still clings to sheds of his youthful idealism and has a lot to learn about the realities of the family business.  However, he is fiercely loyal to his father and won't tolerate any criticism of him. 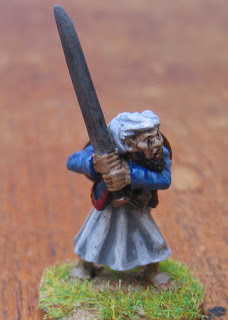 Othman al-Tammar does what he's told, which often involves cutting the heads off those who have failed the boss.  He has no imagination or feelings about this; it's just a job... 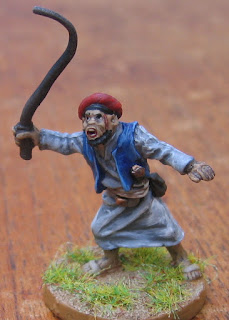 Omar ibn Khaldun is the expedition's slave master.  He is very good at cowing spirits; he can recognise incipient rebellion from a person's body language - often before the slave realises that they about to fight back him/herself.  Omar is a brutal sadist who takes out his anger on all "the goods" for the scar that was once given to him by a Bantu farmer. 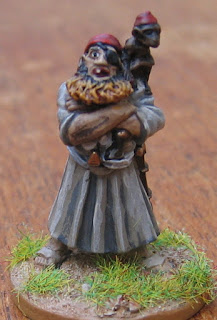 Mussa al-Rasheed is the expedition's enforcer, responsible for discipline.  He ensures personally that the boss's orders are followed and that there is no trace of dissent.  His beard is stained red with henna, though it seems unlikely that he has indeed been on a pilgrimage to Mecca.

The monkey is evil too...

This group forms the core of my Zanzibari column for Congo.  They're a rough bunch of really nasty people.  I've probably depicted them as rather cliched stereotypes, but this doesn't worry me much.  I'll look forward to seeing them thrashed in a game - unless I'm playing the Zanzibaris, of course!
Posted by Colgar6 at 20:00