A few months ago, I started to prepare for Scenario 3 in my Pulp Alley "Perilous Island" campaign.  As written, this scenario takes place inside a large warehouse that is full of goods and inhabited by a few night watchmen.  I did look for warehouse models (I have quite a few crates and the like already), but didn't really find any that were both large enough to fit my vision and at the same time cheap enough to be affordable. 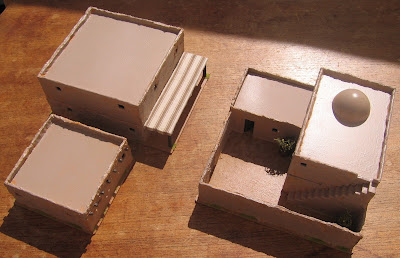 One day, I was browsing the Hoka Hey Wargaming/Timeline Miniatures website when I happened to see some 28mm MDF Middle Eastern buildings.  Suddenly, I changed my plans: Tarzan and the Nazis could fight the scenario at the hideout of the Snake Cultists instead!  Since my cultists are vaguely North African, some adobe buildings would work just fine.

I'll add some trucks and some crates & other goods for clutter (hmm - the Cultists obviously are in the middle of some nefarious plan, such as shipping copies of their manifesto to unsuspecting bookshops across the civilised world!).  Of course, the night watchmen will then become a handful of cultist guards instead.  Muahaha!

So, the rest of this article describes the 3 buildings that I have constructed...

The smallest of these models is basically a simple, wooden box.  It has been detailed slightly by the addition of wooden beams that protrude from the tops of the walls to hold the roof (these are just about visible in the picture below).

For all 3 models, the laser-cut MDF fitted absolutely perfectly.  I suppose that I should expect that these days, yet it always comes as a pleasant surprise when a kit such as this goes together so well.

I've "upgraded" the basic MDF shells by coating them with a mixture of white glue, sand and a ballast powder (I used an old tile grout).  Of course, this required some fixing up after the mixture had dried, to clean any excess from the joints between the walls and the roof!  Oh, well... 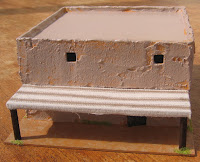 My second building is slightly larger than the small, simple one above.  It also has a second storey and a canopy over the front door.

Like the first building, the interiors are playable.  In this case, the top lifts off to reveal the upper floor, which I have decorated with some printed paper planks and rugs.  I've also added a piece of dowel in the centre of the floor, to act as a handle... 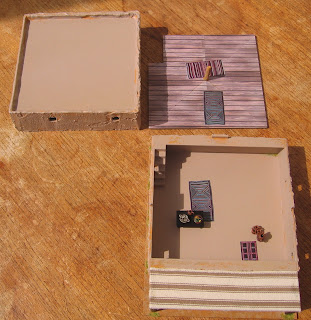 ...allowing the upper floor to be lifted out easily to reveal the ground storey.  I've left most of this space empty, but there are some more rugs, a table and some pots to hint at habitation. 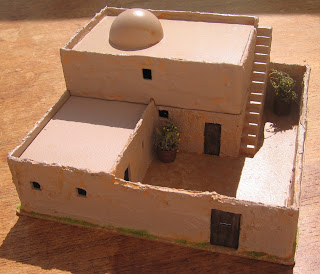 The 3rd and final building in this collection has multiple rooms, a dome (a resin hemisphere) and a courtyard.  This latter has allowed me to add some exterior detail; in a couple of the nooks and crannies there are large pots that contain lemon trees 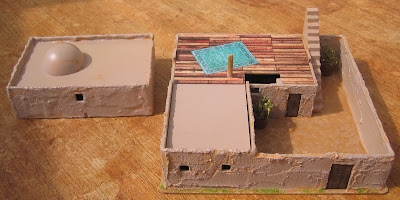 Once again, the top storey lifts off to reveal the upper floor.  Again, I've added a dowelling handle to make it easier to remove the next piece... 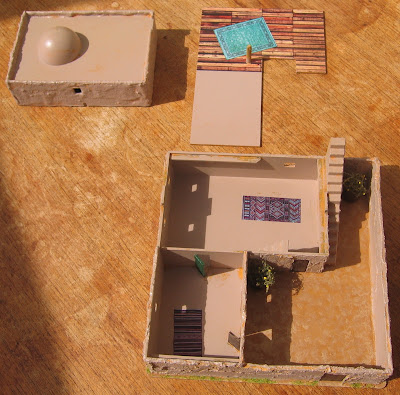 ...which then shows the 2 rooms on the ground floor.  Once more, I've added minimal detail to these space - just some rugs - thus allowing plenty of room for figures or loose scenery items.

Timeline make only these 3 types of Middle Eastern building, which is a pity as they're really nice models.  I think that repeats of the largest building would look a bit strange (it's quite distinctive), though I'm somewhat tempted to get more of the small and medium ones.

These kits are easy to build and could be painted just as they came.  However, I'm glad that I added the plaster mix to the walls; it gives texture to the otherwise completely smooth MDF.  It was a messy and slow process, though!

I'm in two minds about my interior detail.  Part of me thinks that there should be much more to be realistic, whilst the other part says that open space is better for playability.  I'm really not that sure...

I note that other manufacturers exist: Knights of Dice (in the USA) have a larger "Tabula Rasa" range that includes quite a variety of adobe buildings.  These seem to be specifically designed for the model-maker to add detail (the name of the range is a bit of a giveaway!) and are very similar in concept to the Timeline models.