At the end of last year, I showed my recipe for creating a swarm of bees for my 28mm "Wicked Witch of the West" army.  This idea seems to have gone down well, but a couple of responses particularly caught my attention.  Paraphrased, the commenters said "if you did this with a tube or dome then you could place it over a 28mm figure to show that a model was enveloped by the bee swarm".

I found myself returning to this idea again and again; I just couldn't get it out of my head!  Eventually, I thought that I'd just have a quick look online for cheap sources of plastic domes, to see what might be available.  Of course, it didn't end there and so the remainder of this article describes what happened next. 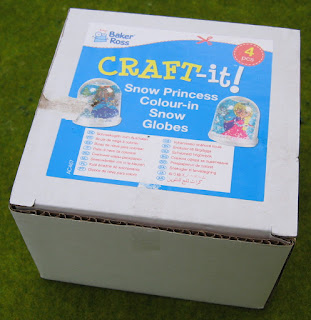 In the UK, there is a company called "Baker Ross" (I imagine that similar suppliers exist in other countries too).  They make cheap craft kits, often in multi-packs.  It looks to me as if their products are aimed at kindergartens, primary school classes or possibly birthday parties for young children.  However that may be, I discovered that they make a range of small, plastic snow globe "kits".

A box of these snow globes cost just over £5 (including postage).  There were several sorts available (mermaids, princesses...), but as far as I can tell the only difference is the pattern on the cardboard insert for the centre of the globe.  Since I would be discarding this anyway, I didn't really care which version I bought. 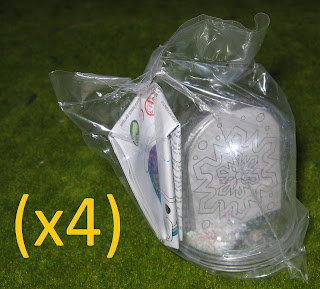 Each box contains 4 globes; the globe comes with instructions and is basically a glitter-filled dome covering a plastic insert & base, which in turn acts as a holder for a patterned piece of cardboard.  The idea is that you colour in the card, slip it into the central holder and then fill the globe with water via a plug in the base.

I wasn't at all interested in these items as snow globes, though!  It was trivially easy to cut the dome away from the plastic base.  Once it was separated, it took a little longer to wash out all the glitter and then paint my bees.

The painting was done according to the recipe in my previous article; bees were painted on both the inner and outer surfaces of the dome.  I'm not sure if painting them on the inside (which was certainly a bit trickier) helped to add to the impression of depth or not.


When the bees were dry, I varnished the dome.

My first attempt ruined the model: I used my normal aerosol satin varnish and the dome went completely frosty!  I'm not sure that there's anything I can do to save this piece; I've tried re-varnishing it lightly (which sometimes works), but it remains completely opaque.

Fortunately, I had several more domes available.  For my second attempt, I brushed on an acrylic varnish.  This hasn't compromised the transparency at all, though on close examination the brush marks are evident.  It'll do...

At 50mm wide and 55mm high, these domes are easily large enough to engulf most 28mm figures (excluding pikemen, horses, or models who are waving exceptionally heroic weapons in all directions).  So, they will work as I designed them to do.

Of course, I don't have any immediate plans to use swarms of bees to engulf models in any of my games.  But I could! 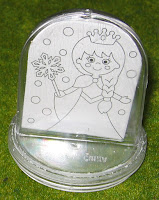 Finally, I now have several base remnants, as can be seen in the picture above.  I'm racking my brains to think how they could be used; so far all I can come up with are dungeon doors (or secret doors in fireplaces, as seen in Indiana Jones and the Last Crusade)!