The Last of the Christmas Models

The Christmas & New Year holiday is well and truly over; I've been back at work for 2 weeks now.  However, I'm still sorting through and putting away models which I painted during that period.  Here are some of them - it's quite a mixture! 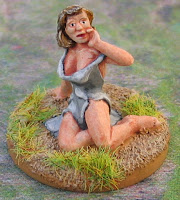 These are some classic "damsels in distress", from Bob Murch's "Pulp Figures" range.  Specifically, they come from pack PWM 10 - Cringing Captives.  I plan to use these in games of Pulp Alley or Congo (fairly obvious, I would have thought!).  As such, I don't really need the other two figures from the pack; sawmills and railway tracks aren't really a feature of Darkest Africa, where my games are set.

Note that I've painted up both of these models in an identical colour scheme.  This will enable me to use one as a replacement for the other in a game, thus indicating whether the heroine is currently tied to a stake or not.


Early this month (i.e. January 2018), I received my Dreadball 2 Kickstarter package.  I'm not buying any new teams, as I already have 12 (I think), of which only 8 are painted.  However, I did receive the new rules, new cards and new game markers.

1st edition DreadBall supplied cardboard counters for the score and rush markers.  This worked well enough, but the 2nd edition has some rather nice models instead.  The new score marker is a miniature trophy, while the turn marker is a robotic commentator/linesman in a floating disk/chair that is liberally equipped with spotlights and/or cameras.  There is also a different figure for the robot referee.

I did need to replace the support pillar on the floating chair with a transparent post.  This was mainly because the moulded pillar was somewhat bent and wouldn't have produced a very good effect.  Still, that conversion/repair was easy enough.

Note that I'm experimenting with transparent bases for the figures which will be on the pitch.  The referee is the first such model to be completed.


The fictional tale of Lady Godiva is simple: a Saxon lord was oppressing his people.  His wife (Godiva) asked him to lower rents or some such, to which the husband replied that he would do so only if his wife rode naked through the streets of Coventry.

Of course, he didn't expect her to do this, but she arranged for the local townsfolk to close their doors and window shutters and then disrobed and rode the streets, unobserved by all.  Her husband was true to his promise and treated his people better thereafter.

A later addition to this tale: one man did steal a glance at the naked lady, but was immediately struck blind as punishment.  His name was Tom; from this incident we get the phrase "a Peeping Tom".

In reality, Lady Godiva was a virtuous Saxon noblewoman who would be much more likely to look like the figure above.  It's entirely possible that she did indeed soften her husband's harsh rule - but not by riding naked through a town!

Finally (for now), I have finished my Super Dungeon Explore "Kinoko" warband!  These are mostly aggressive, mobile mushrooms, though they also have some truffle pigs.  Here are the final two groups to be painted:

There's not much more to say about these; either you'll like them or you won't...

I completed a goodly lot of models during the Christmas/New Year break just past; these are just some of them.  It helped that we didn't go away and that the weather was not good enough for us to be outside much.  Still, it's very satisfying to have made such progress!