Batrep: The Treasure of Toyokawa 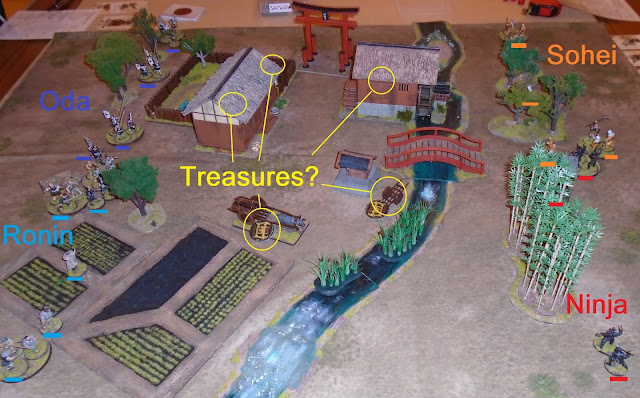 In the small village of Toyokawa, in Hida province, there are rumours that a local merchant has been avoiding taxes by hiding a large part of his wealth.  The local samurai lord, Ekei of the Oda clan, has set out to investigate this and seize any treasure he can find.  In this he is joined by the ronin Tadashi, a disgraced distant cousin who is trying to regain some honour in order to be accepted back into decent society.

However, the story of hidden riches has also reached the ears of a local Sohei monastery.  The abbot has gathered a few followers and has joined (reluctantly) with a bunch of mercenary ninjas in order to search the village himself.

This was a 4 player game of Test of Honour, with two of the players being new to the rules.  To keep it simple, each player had 18 point forces.  In practice this meant that each force had 1 major hero, 1 minor hero and a greater or lesser number of assorted followers.

There are 5 treasure counters hidden around the village.  Each of these can only be discovered by a successful test of wits.  Once revealed, 2 of the 5 tokens are false leads and are worthless.

This leaves 3 genuine treasures.  The winner is the faction which carries any two of these back over their base line, or the remaining side if all of one force are wiped out.  There is no turn limit. 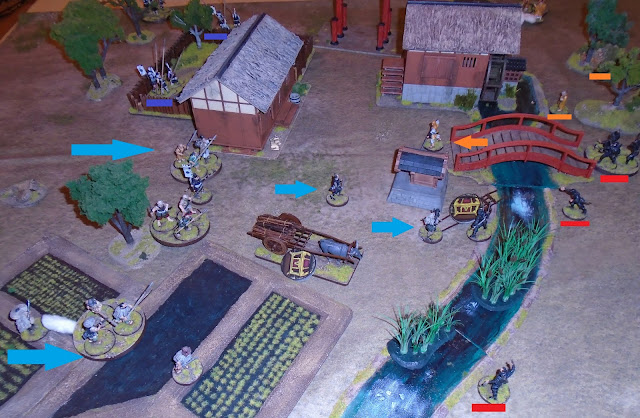 As the followers on each side advanced cautiously, Tadashi raced past the shrine, intending to search the hand cart.  He was confronted by the Ninja Master and although they exchanged blows, no damage was done at first. 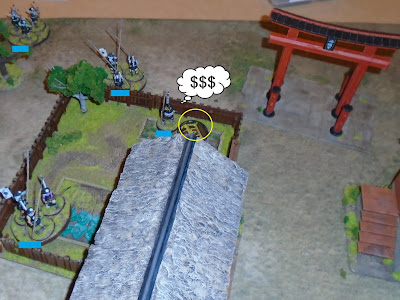 Meanwhile, at the other end of the village, Ekei searched the merchant's garden.  Buried under the radishes, he found a small box which clinked when he shook it.  It seemed as if the stories were true.  It was just as well for the merchant that he and his family had fled, otherwise Ekei would have had his head for this trickery! 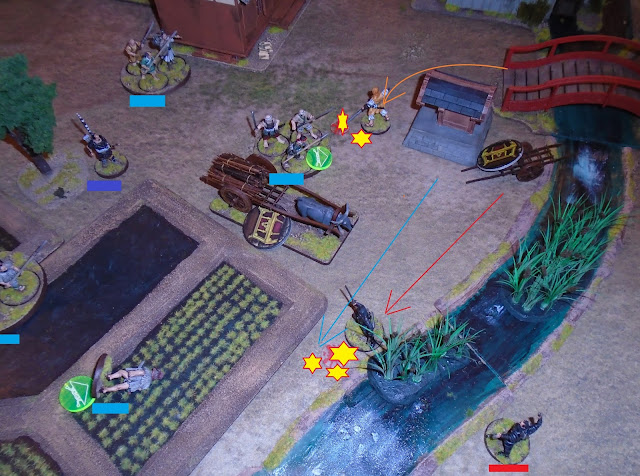 Feeling outmatched, Tadashi ran away re-positioned strategically, but the Ninja Master pursued him anyway and cut him down.  One of the other bandits did try to aid his leader, but his attempt to leap over the rice fields to reach the fight failed spectacularly and he ended up stretched out full length in the mud.

At the same time, the Sohei Abbot ran over the bridge and cut down Tadashi's lieutenant.  This was a calamity for the ronin/bandit player! 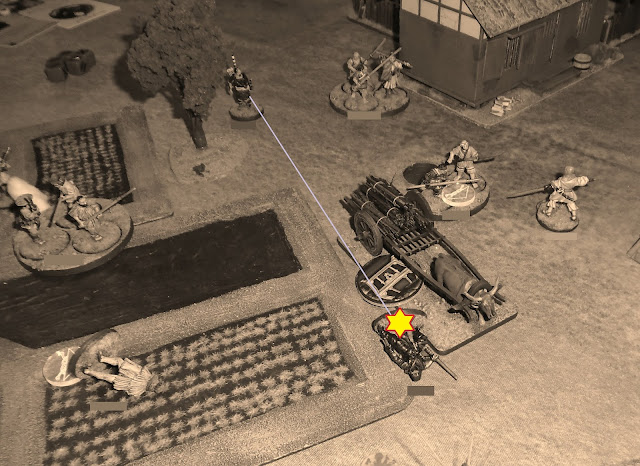 In revenge, the Oda samurai archer drew his bow and shot at the Ninja Master.  His aim was true and the arrow struck the black-clad figure in a vital spot, sending him to his death.

Then we realised that the Oda figure had already taken all of his permitted actions for the turn and couldn't have made this play.  We reset: no arrow was shot and the Ninja Master was unharmed.  It was all a daydream. 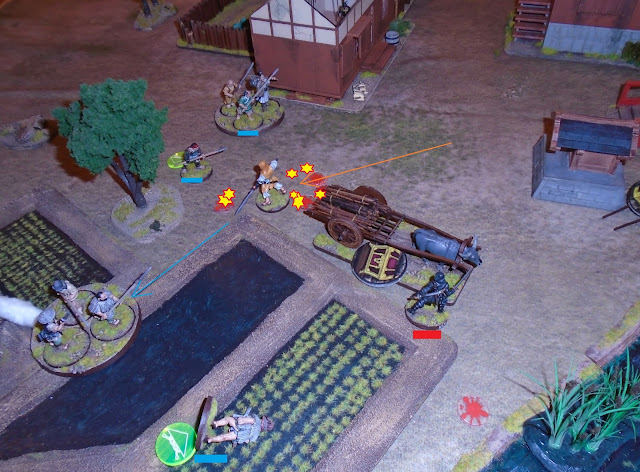 With a dazzling display of martial prowess, the Sohei Abbot continued to rampage through the now-leaderless bandits, cutting down several and causing many others to flee. 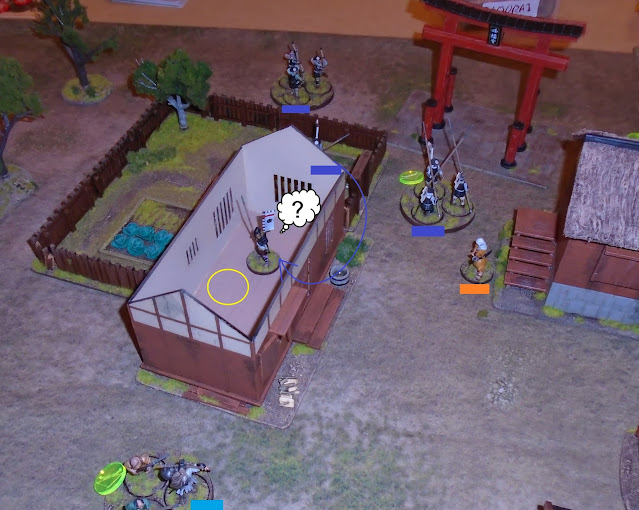 Back in the merchant's house, Ekei carried on with his search for treasure.  It was taking too long, though - he could hear the sounds of struggle growing louder as his followers in the street outside clashed with the advancing Sohei. 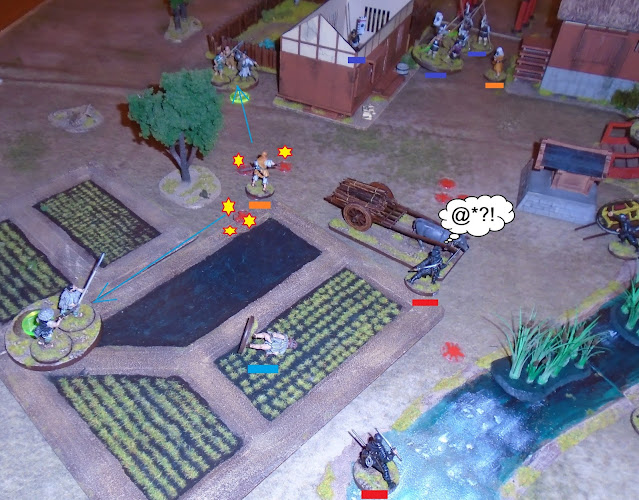 While the Sohei Abbot continued to terrorise the bandit commoners, the Ninja Master decided to investigate the bullock cart.  After screwing up his face in disgust he searched through piles of dung and found ... nothing!  [In other words, he uncovered one of the "fake" treasure tokens]. 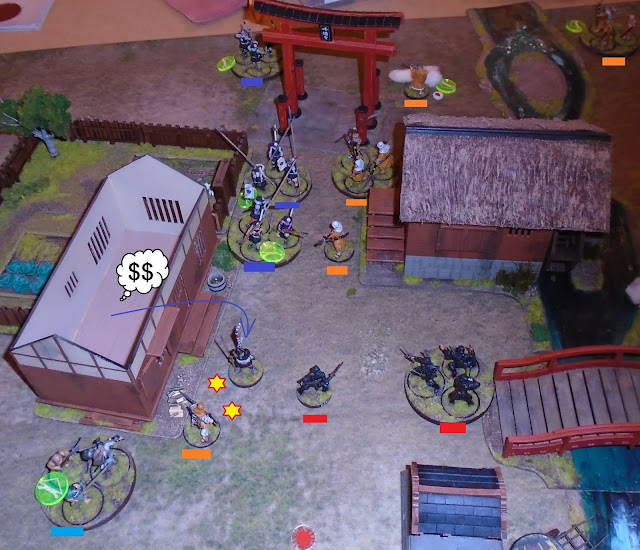 Finally, after much effort, Ekei's efforts were rewarded and he found a small pouch of precious items [so that's 2 treasures.  All he has to do is run off the board and the Oda/Ronin alliance wins the game.].

However, escaping might be a problem.  Ransacking the merchant's house had taken several turns and now enemies filled the street, waiting for the Oda lord to show his face.

Ekei took the initiative and charged out, straight at the Sohei Abbot.  Such was the ferocity of his assault that the monk was driven back, step by step.  However, Ekei still couldn't risk slipping around his enemy; the gap between the abbot and the his other foes was too uncertain. 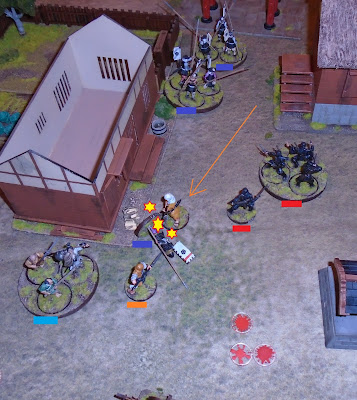 Outnumbered like this, the end was not long in coming.  As Ekei fought furiously with the Abbot, the Sohei lieutenant charged him from behind and cut him down.  There was no realistic chance that the remaining bandits or Oda spearmen could challenge the Sohei and Ninja heroes, so the game was conceded by blue/blue.  In any case, we had reached our real-world time limit and needed to pack up.

Well, that could have gone differently at any one of a number of points!

...but these are all "ifs" and "might have been".  The only real question is this: did the players enjoy themselves?  I can only speak for myself: I thought it was a very entertaining evening!
Posted by Colgar6 at 19:48