This week, I have mostly been painting zombies...

What I should have been doing is finishing, or at least progressing, some of my older hobby projects.  In particular, my Saga Scots warband is primed and ready to paint, but lack of completion is holding up even a trial game.  My 6mm Napoleonic armies are not quite ready for me to put on a game of Black Powder.  And for weeks now I've been intending to make some forest path scenery for a Robin Hood game...

Instead, I've been completing yet more zombies.  These are easy to paint because they're familiar (I'm always faced with a bit of inertia when starting a brand new project).  However, I don't really need them; I've already got enough zombies for anything other than the most ambitious game.  Sometimes you need to do things just because they're fun!

I bought this set at Claymore 2012; getting round to painting them in less than 2 months is relatively quick for me!  Obviously I haven't finished all of the models in the set, but here are 3 female zombies. 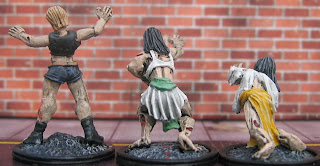 The Blue Moon figures are somewhat "old school" in sculpting terms (for example, the inside of the hands is pretty much devoid of any detail).  I don't mind this at all though; firstly it's always good to have more variety and secondly these chunky models should stand up to rougher handling than some of my new plastic zombies (see below).  However, the moulds are clearly showing their age, with occasional large chunks of flash that needed to be carved or filed away. 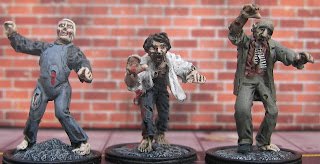 Here are 3 male zombies; like the females they are all clutching or grasping at something.  For the most part, their clothing is very ragged and tattered and they have multiple wounds.  I don't think these are the freshest of zombies! 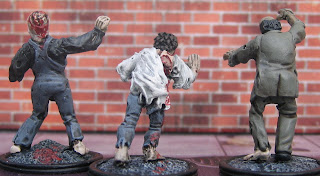 The guy in the boiler suit has even lost the top of his skull!

I showed some of my zombie vixens before, here.  Since then I've made some progress and can display quite a few more.  As well as the lifeguard and the maid (seen previously), this picture shows the evening dress and the nurse.

I think that the evening dress is my least favourite pose amongst these models.  It's the model that looks closest to Barbie in proportion; the legs are far too long in proportion to the torso.  The nurse is just fine though; I could also have painted her as a waitress, I think.

Here are some more of the vixens, including a couple of crawlers.  The first crawler is trying to pick up her handbag with the remaining stump of her arm and cannot figure out why it isn't working, poor dear!
There's not really much left of the second crawler at all!  I've modeled some extra guts and stuff spilling out of the torso, though I confess that I found doing this to be rather unsettling.

I think that the "little red dress" model could be used as a human if desired, rather than as a zombie.  It wouldn't be too difficult to find a head and some arms that didn't have injuries, or to fill in minor wounds with modelling putty.  She could be a survivor if given a weapon, or maybe just a terrified citizen.  She is barefoot, though - that might reduce the ways in which she could be re-purposed.
I've put a rat on the base of the right-hand crawler, just to add a bit of volume to a model that is otherwise fairly insubstantial.  This rodent comes from Black Cat Bases and was in a random accessories pack that I bought some time ago.
Finally, a tip: I tend to use Google Images a lot for inspiration when painting.  Don't search for "women's football strip" if you want to depict a team player; it won't return the results you expect.  Note also that using "uniform" instead of "strip" isn't much better!  The internet is a wonderful thing, but sometimes it can be a dark place as well...