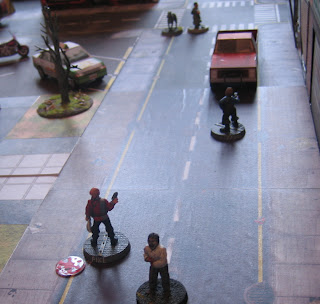 Pike and Pavel were not dead, as Iain feared they might be.  Instead, they had seen the newcomer and his dog.  Figuring that the heavily-armed stranger couldn't be worse than the zombies, they ran towards him, calling for help.  Pavel sprinted like an Olympic athlete but Pike couldn't match his friend's pace and was grabbed from behind by a couple of stray zombies as he ran past.  In a panic, Pike jabbed the first zombie with his elbow; the blow connected with something vital and the zombie was killed (Pike barely outclassed the zombie in melee, 2 dice + an automatic success versus the zombie's 3 dice, but he managed to beat it by 1 point and then roll a '1' to dispatch it.  There was a lot of that happening during this game!)

Even the short delay was proving difficult for Pike, as more zombies approached him.  By this time, Bomber had walked down the street close enough to be in shotgun range.  He fired and blew 2 of the zombies from just behind Pike's shoulder; the civilian just felt a cold hand clutch at his arm before the blast tore it away.  Pike struggled frantically against the 2 remaining zombies that attacked him from behind.  Again, his sharp elbows served him in good stead as one of the attackers was killed and the other was knocked down. 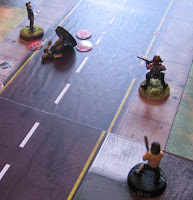 Round the corner of the garage, Iain and Goofy heard the shot.  "Someone's got a gun!" exclaimed Goofy.  "Come on!  Safety in numbers!"  He dashed out and ran down the street towards the noise.  Iain, taken by surprise, was left alone briefly before he followed as fast as he could. 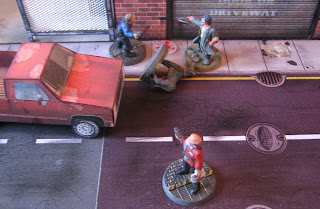 Back near the run-down basketball court, Bomber charged a lone zombie straggler.  He'd emptied his shotgun, but rather than take a turn to reach for his bat or to reload, he felt confident enough to take on a single zombie in hand-to-hand.  Clancy ran in beside him joyfully.  Pavel felt the need to impress this rough stranger and overcame his earlier fears; he too charged into the melee, though being 3rd behind 2 tough fighters, he might be forgiven for thinking that his presence was merely to show willing.
This zombie must have been someone like Jackie Chan or Chuck Norris in its previous life, though.  Firstly it fought Bomber to a standstill.  Next, it fended off the wolfhound with such a vicious blow that Clancy's teeth were heard to clash together; the dog dropped like a stone, stunned.  The rampage only ended when Pavel hit it from behind with his tricorder, beating it by 1 point and... (you know the rest!).

Where did they come from? 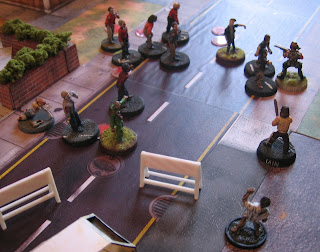 As Iain and Goofy sprinted along the road trying to catch up with the other humans, more and more zombies appeared.  Mostly they came from the far side of the police station, though stragglers were appearing from all directions.  Goofy fended off a couple of zombies that got close to him; it looked as if he would be able to break through the mob and join Bomber's group. 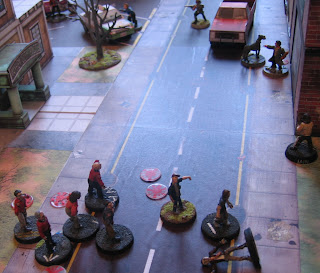 Goofy ran as if pursued by the devil himself after he knocked down the zombies who tried to stop him.  Iain tried to follow, but just couldn't keep up.  Perhaps his cricket pad was hampering his leg movements?
Everyone held their breath as Clancy stood up after being stunned and rolled his "Harry, are you OK?" test.  The dice came up a '6', so the big wolfhound was fine, if a little wobbly on his feet. 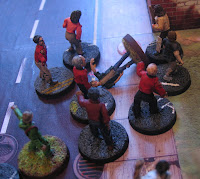 The mob caught up with Iain at the corner of the Motor Repair Shop.  For a moment it looked as if he wouldn't make it, but he smashed the skull of the first attacker and knocked down the second zombie.  Iain then broke free from the third creature to clutch at him and continued to flee.  Thank goodness he'd kept the cricket bat from his school days! 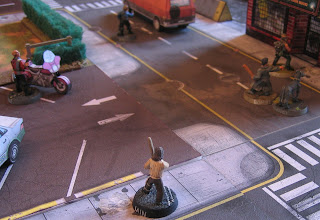 Bomber, Clancy and Goofy ran for the cover of the gun shop, followed by Iain.  Pavel and Pike couldn't resist a bit of looting on the way and investigated the vehicles that were parked by the side of the road.  Pavel had already found some groceries in the back of a sedan, but it was Pike who thought he'd struck the jackpot.  "Hey, someone left the keys in this motorbike!" he called to his friend.  He flicked the ignition switch; the bike engine gave an almighty, noisy cough but failed to run properly.

"You haven't got time for that!  Run!" shouted Pavel.  He could see the horde approaching faster than he imagined possible.  Pike glanced over his shoulder and started to move just as the leading zombie reached for him. 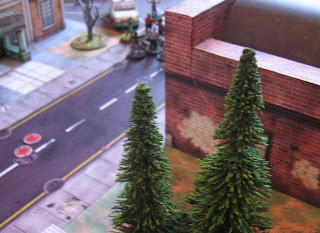 The skies were really dark now; the storm finally broke with a lightning strike (a random event).  The bolt hit a pine tree near the garages, but it didn't stop the zombies. 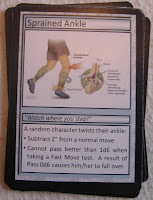 Another random event!  In his haste to climb into the red camper van and hide from the mob, Pavel twisted his ankle.  He grimaced with the pain as he sat for a moment in the driver's seat, before realising that the van wasn't a useful sanctuary at all. 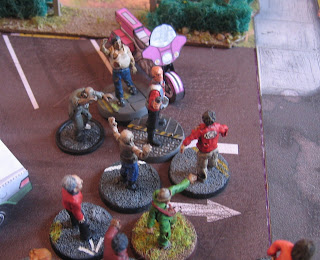 At least Pavel was spared the sight as Pike was surrounded by a crowd of zombies.  His sharp elbows again managed to kill one of the attackers (against the odds) and knock down another - but there were just too many of them.  Pavel cowered down in the van's seat as he heard his friend's screams come to an abrupt halt.

Bomber and Clancy had run right through the gun shop and out the back door before they realised that no-one else had kept up with them.  They turned back and re-entered the building.  "Come on!" he shouted to Goofy.  "We have to go!"

Pavel used the momentary distraction while the zombies crowded round the body of his comrade to climb out the other door of the camper van.  He hobbled as quickly as he could towards the gun shop's front door and entered the building (it's just as well he didn't fail his Fast Move test, else he'd have fallen over and been stunned; sprained ankles can be dangerous!) 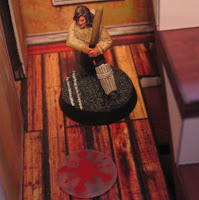 Meanwhile, Iain was searching the building, despite the calls from Bomber and Goofy to flee.  He encountered a single zombie on the first landing but batted it aside with practiced ease.  There was a pile of merchandise lying on the floor, so Iain grabbed something at random before retreating.  It turned out that he had picked up a telescopic sight, still in its original packaging. 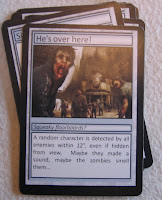 A further random event occurred just as the zombie mob finished feasting on Pike's corpse.  They had seen live humans enter the armoury anyway, but they now moved towards it with a doubly renewed purpose. 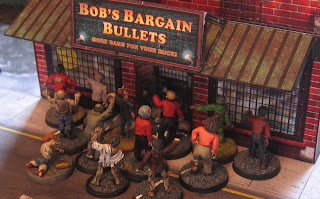 Even as the zombies battered on the front door, Bomber hustled the remaining survivors out of the back door and away to safety.  At least, to somewhere else; there's nowhere safe in the city any more...

Iain and Pavel were thoroughly shaken with the day's events.  They willingly agreed to follow Bomber and become part of his group, though they were probably not that happy when he told them how his previous group had been scattered.  Clancy was very quiet for a few hours, but soon regained his boisterous confidence.  Goofy remained taciturn and sullen, as always.