"We have crossed into the Neutral Zone near to Regulus III in support of the new Federation carrier, the USS Gemini.  There we will conduct fleet exercises to test the effectiveness of her fighter squadrons.  Admiral Bellamy has chosen this remote location to reduce the likelihood that passing merchantmen will observe our latest weapons in action and then sell such data to a hostile power."

"The Admiral Kang and her escorts are to proceed into the Neutral Zone towards Regulus III .  Her maiden voyage will thus be far from prying eyes who would report the existence of the new battleship to our enemies". 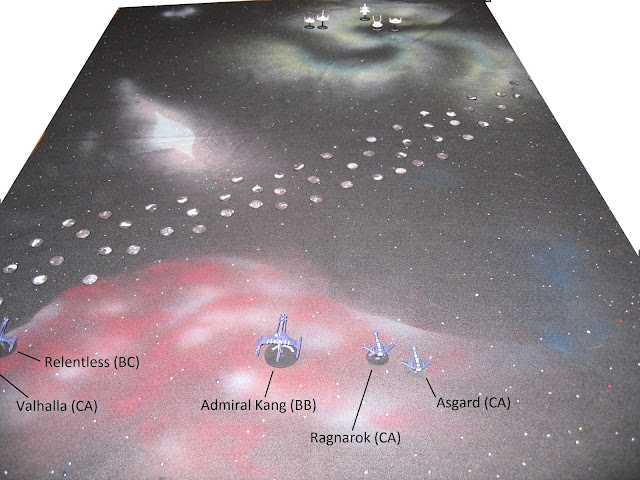 The 2 opposing fleets stumbled over each other from opposite sides of an asteroid belt.  This field of rocks would encourage caution, but both fleet commanders needed to eliminate the opposition before news of their presence could be relayed back to their political masters. 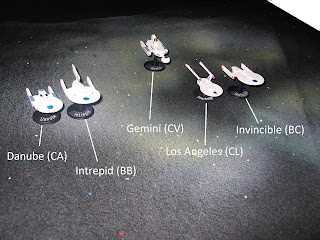 On the face of it, this was a straight-up fleet fight.  However, I always like to do something a little different to keep my players on their toes.  This time, I wanted to test out my prototype Full Thrust Random Event deck.  The inspiration for this comes from the Doctor Who Miniatures Game (DWMG).  At the start of the game, each side is dealt 3 cards from a deck of random events.  1 card (maximum) may be played by each side in any given turn.  My Full Thrust deck has a mixture of possible events drawn from real-life naval battles and from Star Trek & other science fiction shows; hopefully this would add a bit of flavour to the proceedings! 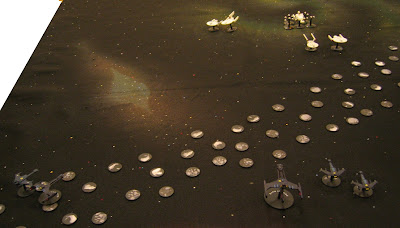 Both sides advanced cautiously to start with.  The Federation carrier held back a little and launched 4 squadrons of fighters, whilst the Danube and Intrepid veered off to face the small Klingon flanking force.  An early Torpedo Malfunction card was played by the Klingons when the USS Intrepid fired at long range on the IKS Relentless.  The event would have caused the torpedo to miss automatically, with a chance that it would home in on the firer instead.  However, the Federation admiral took no chances and cancelled the malfunction with an That's Not Fair event card of their own.  The torpedo wobbled a bit, but then scored a direct hit on the Klingon battlecruiser for 6 points of damage.

The Klingon battleship slowed down to enter the asteroid field, not wanting to take a chance on hitting a 500,000 ton rock.  This made it very easy for the Federation fighters to predict the ship's course and they swarmed it mercilessly.  At the same time, the carrier's escorts were concentrating their fire onto the nearest cruiser (IKS Ragnarok), inflicting heavy damage - most of her weapons were knocked out. 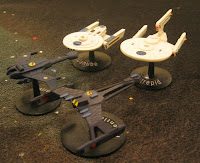 The flanking forces approached head-on at point blank range.  Obviously the first to fire would gain a considerable benefit.  Normally in Full Thrust, the larger fleet picks a ship to fire first, then firing alternates one-ship-at-a-time between the sides.  However at this stage both fleets had the same number of ships, so first fire would be decided by a dice roll.  All the players were cheering on as their respective admirals rolled.  Initially they both threw a '5' and so had to roll again.  On the second roll, the tension was enormous, but the Klingon rolled a '6' and beat the Federation.
The battlecruiser IKS Relentless was chosen to shoot first and the sneaky Klingons used another event card "Match their shield harmonics!" to neutralise the USS Intrepid's screens for this salvo.  The Federation battleship was gutted by the torrent of fire, helped by some high Klingon dice rolls  She was left with 3 hull points, life support was failing, the warp core was about to go critical and the engineer's secret stash of Arcturan Pornography was vapourised! 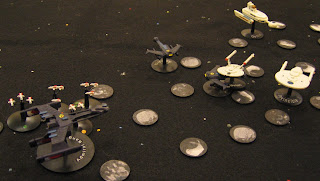 In return, the Federation fighters inflicted major damage to the IKS Admiral Kang.  As they took her past the 3rd threshold check (i.e. 3 of her 4 rows of hull boxes were destroyed), the opposing side played a Design Flaw event card.  This required the Klingon flagship to take an extra threshold check; failure would result in the ship exploding immediately!  Fortunately for the Klingons, a vigilant engineering officer saw the danger of a fighter attack on an unprotected exhaust port in time to close an internal blast door; thus preventing the damage from reaching the fuel supplies.  His action undoubtedly saved the ship! 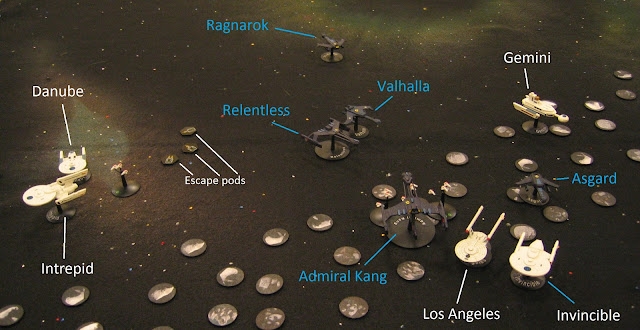 The captain of the USS Intrepid ordered "Abandon ship!"; the broken battleship continued coasting towards the asteroids as escape pods erupted from her sides.  On the other side, the all-but-weaponless IKS Ragnarok accelerated away from the encounter; at least she would survive the fight.

One group of fighters broke off from pestering the Admiral Kang in order to attack the Relentless instead.  Initially they misjudged her location quite badly, but using the afterburners put them in attack range.  However, a point defence turret on the Klingon ship got lucky and destroyed most of the attacking squadron single-handed.

The remaining Federation ships and fighters hoped to deliver a death blow to the Klingon flagship as they passed by, but the IKS Admiral Kang cunningly played an "Evasive Manoeuvres!" event card to reduce the damage.  In doing this, the Kang forfeited her own chance to shoot, but she had very few systems still operational and this wasn't a big sacrifice.

We had to call time on the game at this point.  The Federation had definitely lost one battleship (the USS Intrepid was abandoned and about to hit the asteroid field at speed), whereas the Klingon fleet had one battleship badly damaged and one cruiser out of the fight (weaponless).

I'd say that the remaining Klingon fleet was well positioned, behind the Federation ships, but that pursuit would have been hampered by the Klingons' need to cross the asteroid belt safely (the USS Los Angeles and USS Invincible in particular were not in the asteroids and could just pour on the acceleration to escape.  Doubtless they would have taken some long-range parting shots, but they would probably have survived this).  The fighters had been potent early on, but were now reduced in number and short on fuel and weapons.  Overall, I'd give the Klingons a minor victory, I think.

Several Klingon officers are due for a medal, I think:
I was pleased with the test of the event cards.  They weren't overly obtrusive, yet could make a difference when played cleverly.  It's still in the prototype stage, but I'm encouraged to keep going with this idea.