We last saw John the photographer and his comrades in Game 8: Breakdown.  Games 7, 9 and 10 have been following the exploits of the other group, led by Bomber and separated from John during a zombie attack during game 6.  That's all clear, isn't it?

In "Breakdown", the military convoy which was evacuating John and his comrades was attacked by rioters whilst halted to change a punctured tyre.  The party barely escaped, crammed into a single General Purpose Vehicle (GPV) and with wounded soldiers on board.  Indeed, they fled so precipitously that they left the wounded Lieutenant Costner for dead, as well as the obviously dead Abe and his mobility chair. 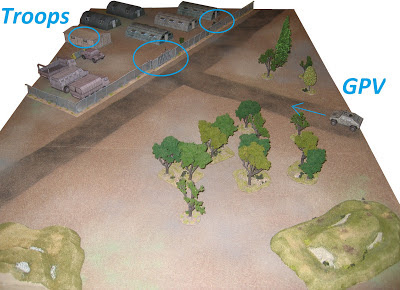 Camp Medomak is an old, low security National Guard base.  The facility is located out in the woods, though not far from the city.  It's from there that teams of soldiers have been sent out to evacuate civilians from threatened areas, with mixed success.

I'm using the Safe Zone scenario from the ATZ: Haven book, slightly adapted to suit my needs.  The first change I've made is to the terrain & setup, since I have fences and quonset huts in my collection rather than a 10' wall with firesteps.  Next, I need to have the survivors' GPV approach the camp, looking for refuge.  Finally, I'll just use whatever soldiers I have in my collection rather than sticking to the letter of the setup from the scenario book.  I'll leave out the guys with the rocket launcher, auto-cannon and other inappropriately heavy weapons, though. 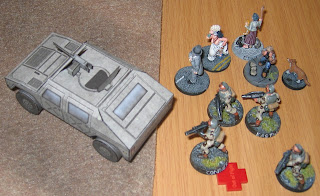 In the GPV are crammed the following people:
At the base, these soldiers are on guard at the gate:
Patrolling the fence line are:
While in the office building are: 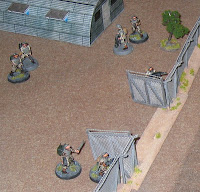 As the GPV approached slowly, all the sentries clustered around the gates to the camp.  Major Brosnan came out of the office to see what was going on.  "Open up!" he ordered.  "It's one of ours."  But where was the rest of the convoy, he wondered?

The instant the GPV was inside, the soldiers shut the gate.  This was not a moment too soon, as a beat-up pickup truck and a black sedan approached along the same dirt track.  Even at a distance, the camp's inhabitants could see that there were rough-looking armed men in the back of the truck.  "Now, what do they want?" mused Brosnan.  "Look sharp, guys!  I don't want trouble, but be prepared just in case." 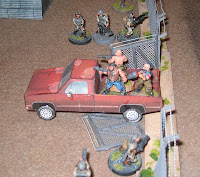 The troopers barely had time to think before the pickup truck accelerated and rammed the gate.  Truly, these gangers must have been completely desperate! 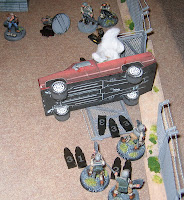 Curly, the gang's leader, fired his shotgun at the nearest figure (Major Brosnan) and cut him down.  In retaliation, the remaining soldiers fired liberally at the vehicle and its occupants.  Several of the passengers were hit, then the minigunner opened up.  His shots tore the vehicle apart like tissue paper and set it ablaze!  There were no survivors. 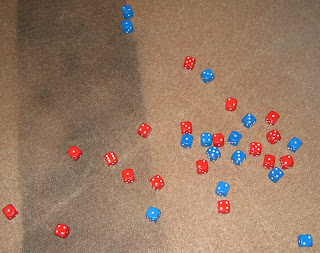 A lot of dice were thrown that turn to see if any zombies were attracted by noise.  Since it's a rural area, only a '6' would have this effect, so a lone figure was placed on the road between the woods.  He stood there, swaying gently, for several turns thereafter without moving (many failed activations). 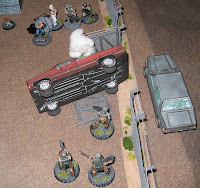 The black car realised that it couldn't get through the camp gate, so it turned sharply to avoid piling into the burning wreckage of the pickup.  As it passed along the fence line, the leaderless soldiers abandoned all attempt at fire discipline and riddled it with bullets.  The driver was wounded, but a passenger managed to take control and the remaining gangers fled, empty-handed. 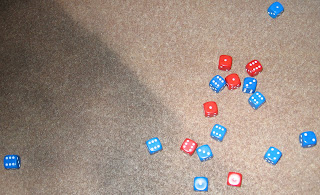 This time, the dice gods went the other way!  As the dust settled and the noise of the fleeing vehicle receded into the distance, silence fell for a moment.  Then, one of the soldiers shouted "Look!" and pointed to the forest.  Out of the trees, figures were stumbling forwards, arms hanging limply at their sides.  They weren't moving fast, but the blank expressions on their faces was unsettling even for the experienced survivors. 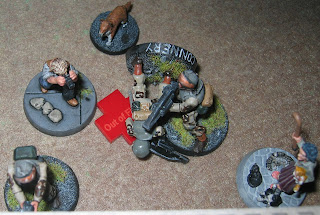 The sergeant barked out orders, trying to impose a semblance of order.  Some of the troopers obeyed: Dalton helped John to carry the wounded Connery from the GPV into the first aid station, while Moore ran for the keys to the armoured personnel vehicle.  The plan was to use the APV to push the burning wreckage out of the gate and block the entrance.

Meanwhile, Eastwood was trying to turn the GPV round and move it into a position where he could use its roof-mounted machine gun.  However, in the tight space and with people running around all over, this wasn't easy! 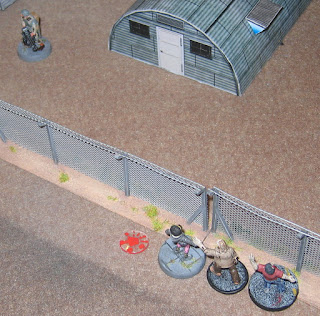 Further off, Norris (the minigunner) had discovered more zombies.  These were trying to break through the fence, having been attracted by the noise and the smoke.  Smoke?  "A little help here!" shouted Norris over his shoulder.  The building beside him was rippling with heat; flames could be seen inside it.  Perhaps a stray bullet had hit something flammable, or maybe one of the occupants had dropped a cigarette or left a camp stove running in their haste?  Whatever the reason, the hut was definitely on fire! 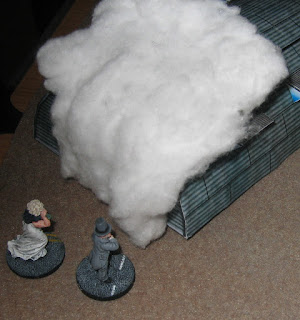 Darcy and Lizzie ran over to the burning building to see what they could do.  After a while, John joined them and with all 3 civilians fighting the fire, they eventually managed to put it out.  It was obvious that the hut was gutted, though; very little of its contents could have survived. 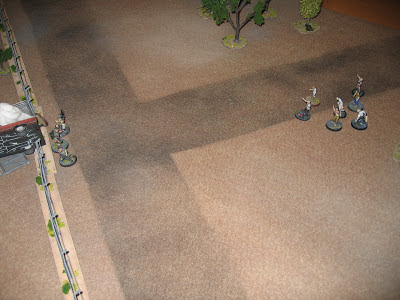 Several of the troopers at the gate moved outside of the camp, past the burning pickup truck.  This gave them a good line of sight and they started to pick off the zombies which were now approaching from left, right and centre.

Norris thinned out the group that was trying to break through the fence.  They could see him now and their moans and snarls were growing more insistent, but so far the fence was holding.  However, it didn't seem to matter how many he killed - more zombies just kept coming out of the woods!

At this point, we ran out of time and had to pack up.  We haven't yet seen most of the encounters that are described in the Safe Zone scenario and the game doesn't feel finished.  The current situation is that the soldiers are holding their own, but the number of zombies is slowly increasing.  John, Darcy and Lizzie are wondering what to do next, whilst Edna is rummaging through the administration block looking for a nice cup of tea.

Will the soldiers try to question or even disarm the newcomers?  Will they be too busy fighting off the undead?  Can the sergeant come up with a plan, or is it just every man for himself?  Too many questions...

I feel sure we'll need to revisit this in a future session and pick up from where we left off!