At the weekend, I finally received the finished version of my Full Thrust event cards from the printers.  That being so, there was only one choice of game for this week's club meeting!  [For my ATZ fans, I know it's been a long wait, but good things are coming.  Soon...]

So, I thought it was high time to bring out my Sa'Vasku alien fleet.  Normally, I don't use these at the games club because they're tricky to control.  In Full Thrust, these space-dwelling creatures have their own energy allocation rules and this makes them much more complicated to manage than any of the other fleets.  Still, I thought I'd give my older son the chance to learn how to use them.

Right, I'm not a great fan of "line 'em up and shoot until everyone bar me is dead" games, so I needed to come up with a scenario for the game.  Here's how this one goes: 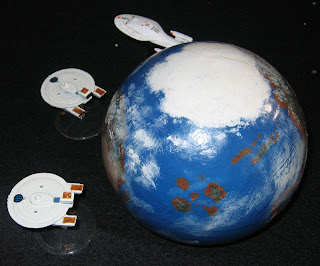 The setting is near the Federation planet 'Caledon'.  This is a fertile, M-class planet, sparsely populated with a total of about 10 million humans, mostly farmers. 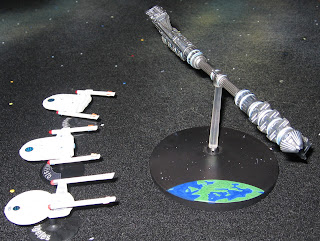 In distant orbit around Caledon there is a large space station, home to a zero-G manufacturing facility and owned by the M.D.B. corporation.

Further off, the bulk freighter Pride of the Orient is in trouble.  She's supposed to be delivering raw materials to the M.D.B. factory, but one of her holds has ruptured and she's shed 8,000 of ore into space.

So far, this is just a regular day in the Caledon system, but sensors have picked up the rapid approach of some alien vessels.  The good news is that the Federation have a significant squadron of assorted light cruisers and heavy destroyers present; these were due to take part in the "Solar Freedom XXVI" exercises next week.

The bad news is that the Federation have no idea what the alien creatures want.  Are they just passing through (migrating)?  Are they trying to make contact?  Or are they planning to attack? 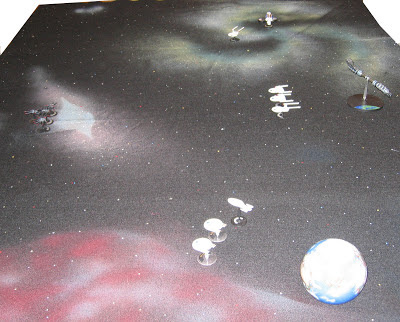 For the first couple of turns, the Sa'Vasku approached slowly, not making any use of their advanced drives and potentially incredible maneuverability.  Indeed, they did possibly the worst possible thing at this time: the outnumbered bioships opened fire on the central group of cruisers!  This clearly signaled their hostile intent and the Federation commodore immediately ordered all his ships to return fire.

Damage was taken by both sides over a couple of turns of shooting.  In particular, one of the 2 Sa'Vasku "cruisers" was badly hurt and the smaller Sa'Vasku "destroyer" lost all maneuvering and shooting ability.  On the other size, the Federation cruiser Callisto was damaged significantly.  Indeed, Callisto and her sister ship Phoebe, along with the destroyer Sable all took hits from leech pods - a particularly pernicious bio-weapon that clings to the hull of its target and continues to gnaw its way through in further turns unless it is killed. 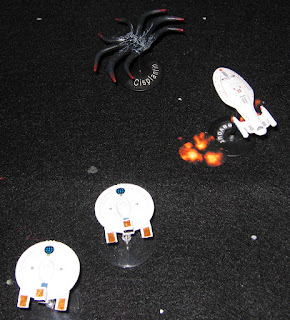 On turn 3, the 2 damaged small Sa'Vasku vessels drifted forward, but the other pair of bioships suddenly accelerated.  Their battlecruiser turned towards the planet at high speed and ended up face-to-face with the small (and trembling!) scout cruiser Endeavour.  Endeavour gave her best shot and certainly hurt the beast that was bearing down on her, before she took 11 points of damage in return out of a possible 12.  With life support failing and the command bridge in disarray, the gallant ship was abandoned and left to drift.

Despite being troubled by a leech pod, the destroyer Sable and her undamaged sister Oryx threw down some massive salvos on the monster and caused it a lot of injury in return. 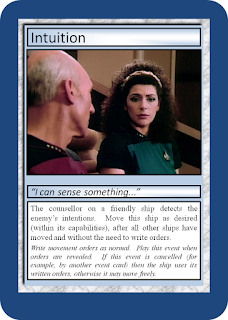 As the other undamaged Sa'Vasku ship accelerated, the ship's counselor on the Phoebe had a premonition.  "Captain, it's going to fly right past us!" she exclaimed. 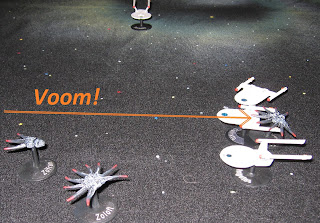 The captain immediately ordered "Hard a port!  Full stop!" - but even then the Federation cruiser couldn't turn tightly enough to bring most of its weapons to bear on the enemy.

The leech pod attached to the Callisto chewed its way into the engineering section and accidentally caused a warp core breech.  Panic ensued, though in the end the ship's structural integrity was compromised by the leech: she fell apart before she blew up!

At the same time, the leech attached to the Sable also ate its way through the hull and destroyed the smaller ship.

Meanwhile, the leech that was attached to the Phoebe was running rampant!  For 3 turns in a row, mixed teams of security and engineering tried to contain the thing and flush it out into space, but it just kept on dissolving its way through deck after deck.  It even managed to destroy the navigator's manga collection! 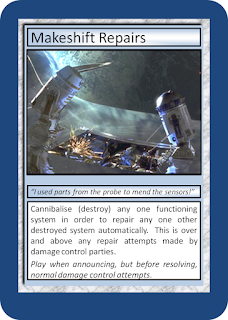 Now, here's the good part: the Federation commander was holding a "Makeshift Repairs" event card and could have used it to stop the leech pod at the cost of one of his ship's systems (a point defence, say - not needed in this scenario).  For 3 turns he agonised over whether to play the card for a guaranteed success (minus a ship's system) or whether to roll the dice for a 50% chance of success, but keeping all systems.  Each time, he chose to roll and lost! 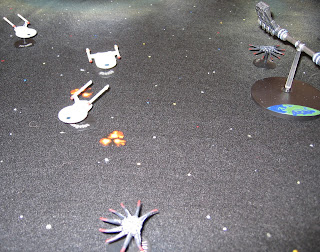 With only 1 cruiser fully operational, the Sa'Vasku gave up their plan of capturing humans from the space station.  Instead, that ship made a screaming high-speed turn past the M.D.B. facility and fled into outer space.  The other Sa'Vasku cruiser was hurt, but was still able to out-accelerate the defending ships quite easily and escape.  Of the 7 initial Federation vessels, 3 were now lost; the remaining 4 took out their anger on the heavily damaged Sa'Vasku battlecruiser and destroyer.  Neither of these bioships survived.

Overall: Federation Victory!  The Sa'Vasku player was not familiar with their special rules; had he understood their capabilities better then this could have been a very different game!