HOTT: The Crossing of the River Berenya 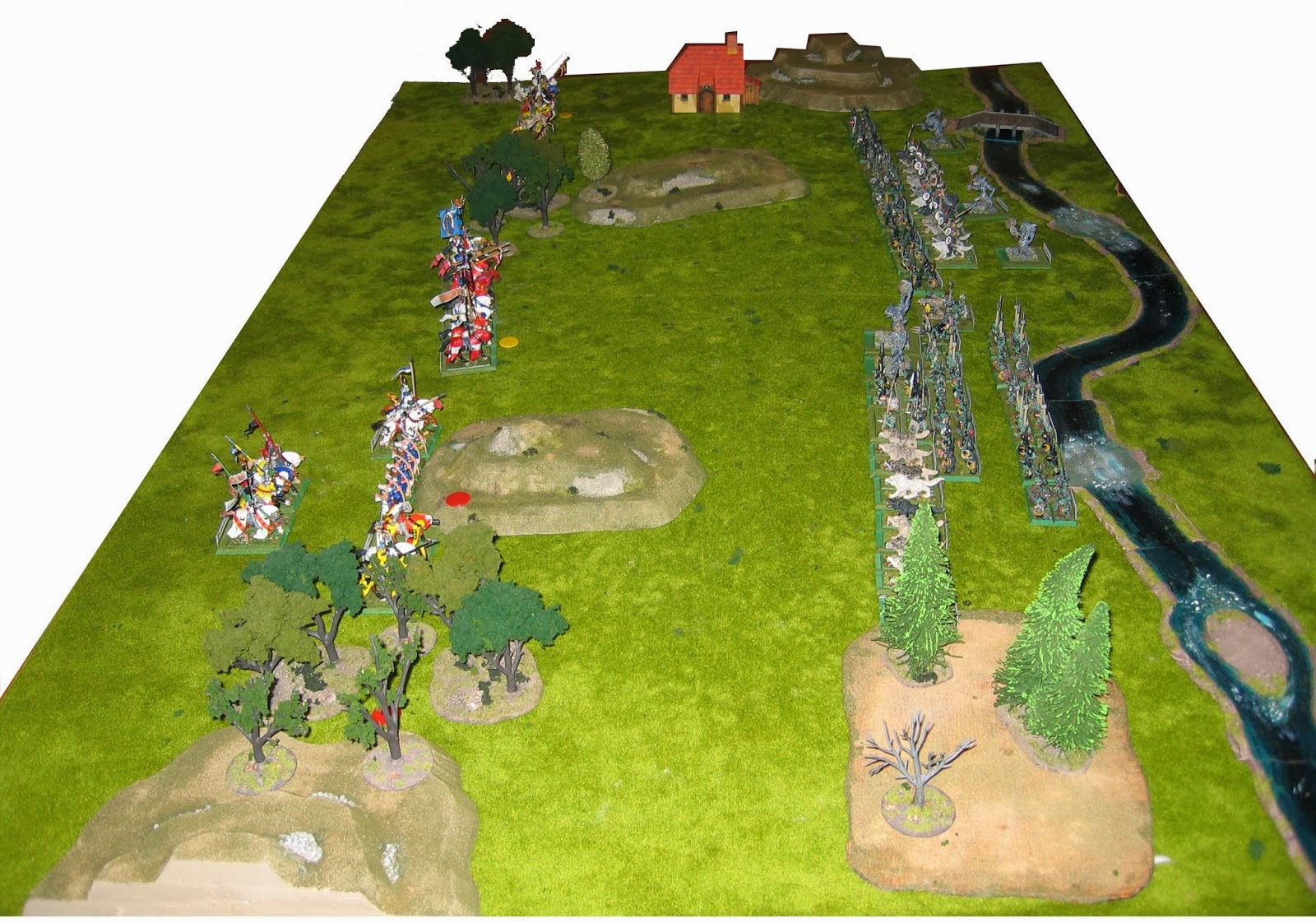 The Knights of Lyonesse had been outmanoeuvred and surprised.  They were in sight of the River Berenya which they had to cross to reach their homes.  Between them and the river was a huge army of goblins, trolls and wolves, easily outnumbering the forces of chivalry.  But, being heroic knights, they weren't daunted at all.  As long as someone lived to tell the tale, the deeds done on this day would be sung far and wide across the land!

This is a big-battle game of Hordes of the Things, but it's not an even match-up.  The knights have fewer troops than the goblins, but they have more leaders.  The victory conditions are also asymmetric and no strongholds are used.

Woods and hills are as normal in the rulebook.  The river counts as clear terrain at the bridge, the fords and the shallow parts near the little island.  At other points the river is difficult terrain and affects movement and combat outcomes accordingly.

The knights must exit as many elements as possible off the far side of the board.  The goblins must stop them.  Note that I've been deliberately vague about exactly how many elements are enough! 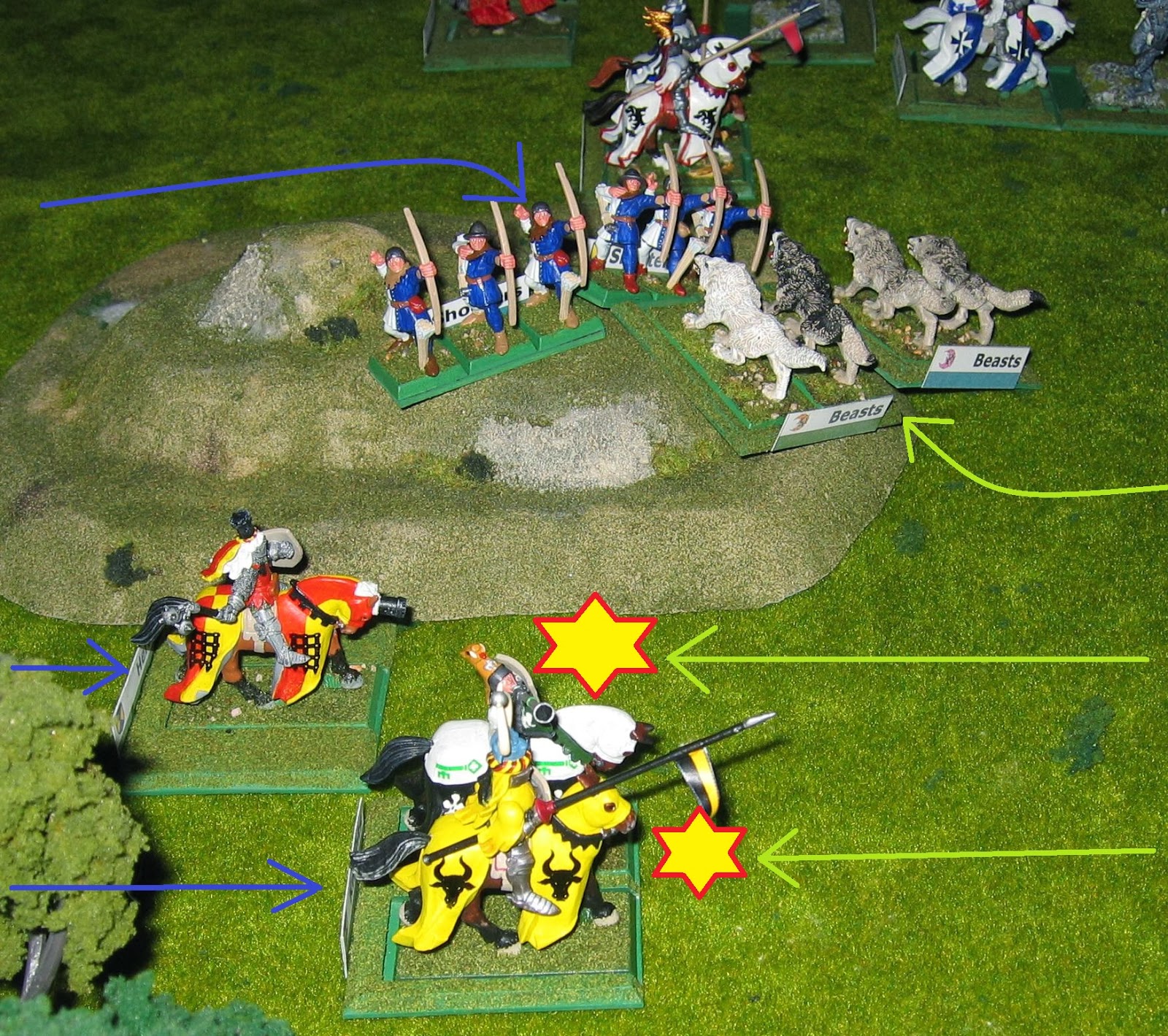 In our game, the southern knights advanced rapidly.  Wolves were sent to face them, but the knights just rode straight over these beasts without slowing down.  It took the archers on the nearby hill a little longer, but they were also victorious and all the wolves were wiped out for no loss.

In the north, knights also advanced rapidly.  Initially they didn't have as much luck against deep goblin formations though Saint Florence of Artenay, the paladin, did destroy a horde. 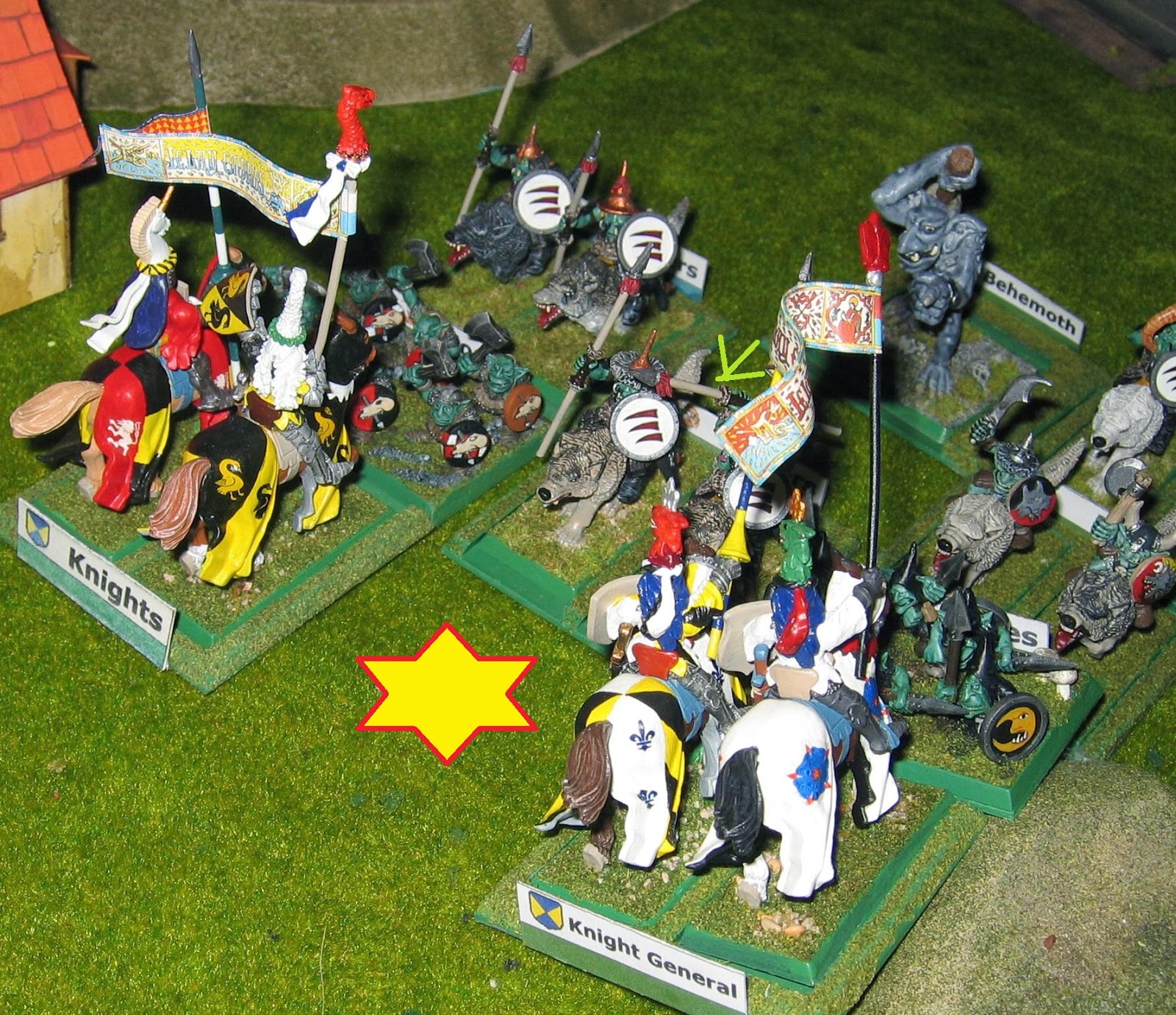 To everyone's surprise (and to the horror of the knight players), the counter attack of the goblin riders unhorsed Saint Florence; she stomped off in a bad mood and wouldn't fight any more.  [Paladins are temperamental creatures in HOTT: they have high combat scores but tend to leave in a huff rather than just recoil if something beats them even once.  Saint Florence was 6 to 3 up against the goblin riders, but she still managed to lose!  Since she was worth 4 of this command's 16 points value, it was a significant blow]. 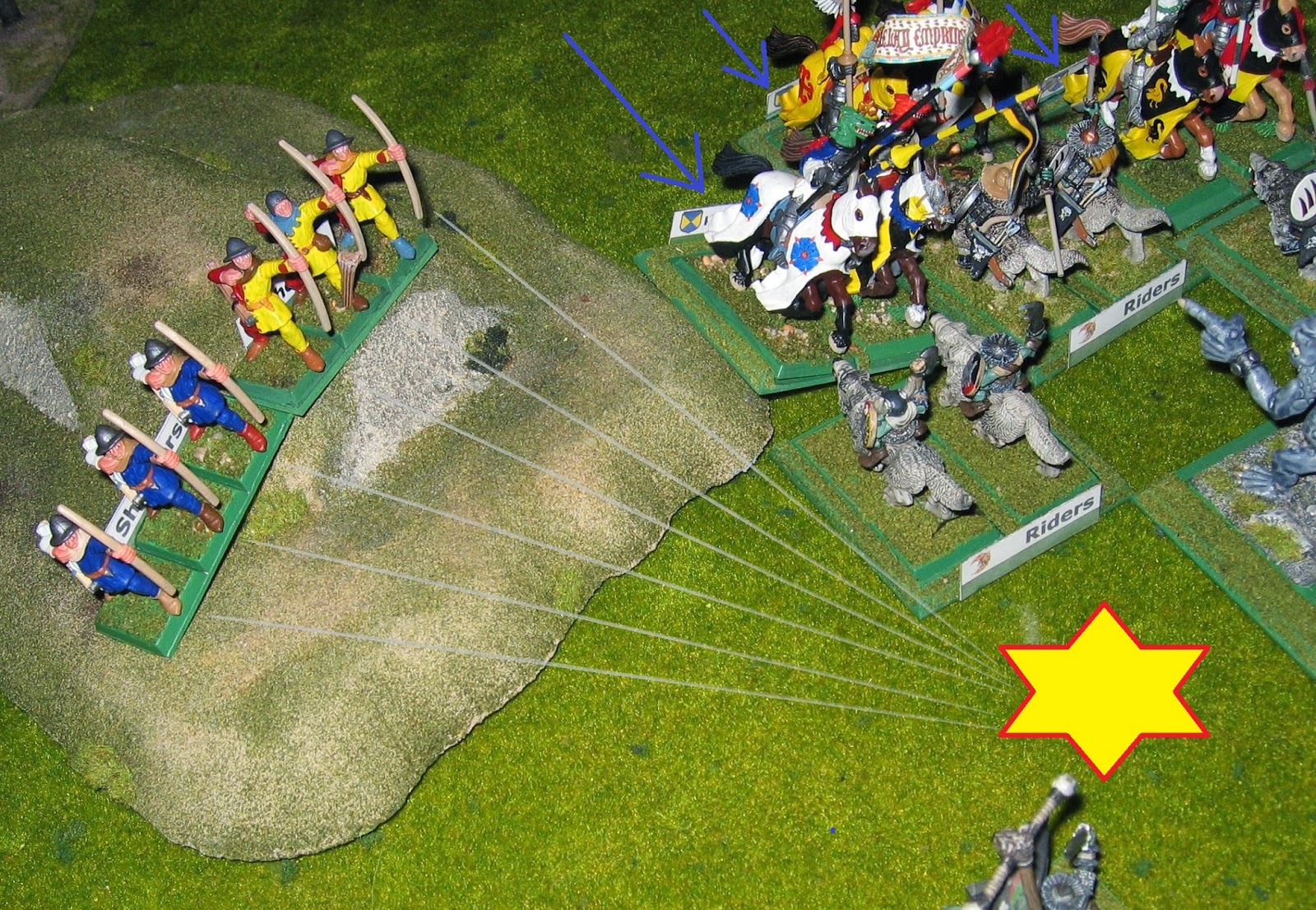 Rather than cause dismay, the loss of the paladin seems to have spurred the northern knights on.  The gap in their ranks was quickly filled from their reserve and they started to push back the other goblin riders.  More significantly, 2 elements of archers fired volleys at the goblin general and managed to kill him outright.  This was a very hard loss for the goblins, as their already unwieldy northern army would now be even more difficult to command. 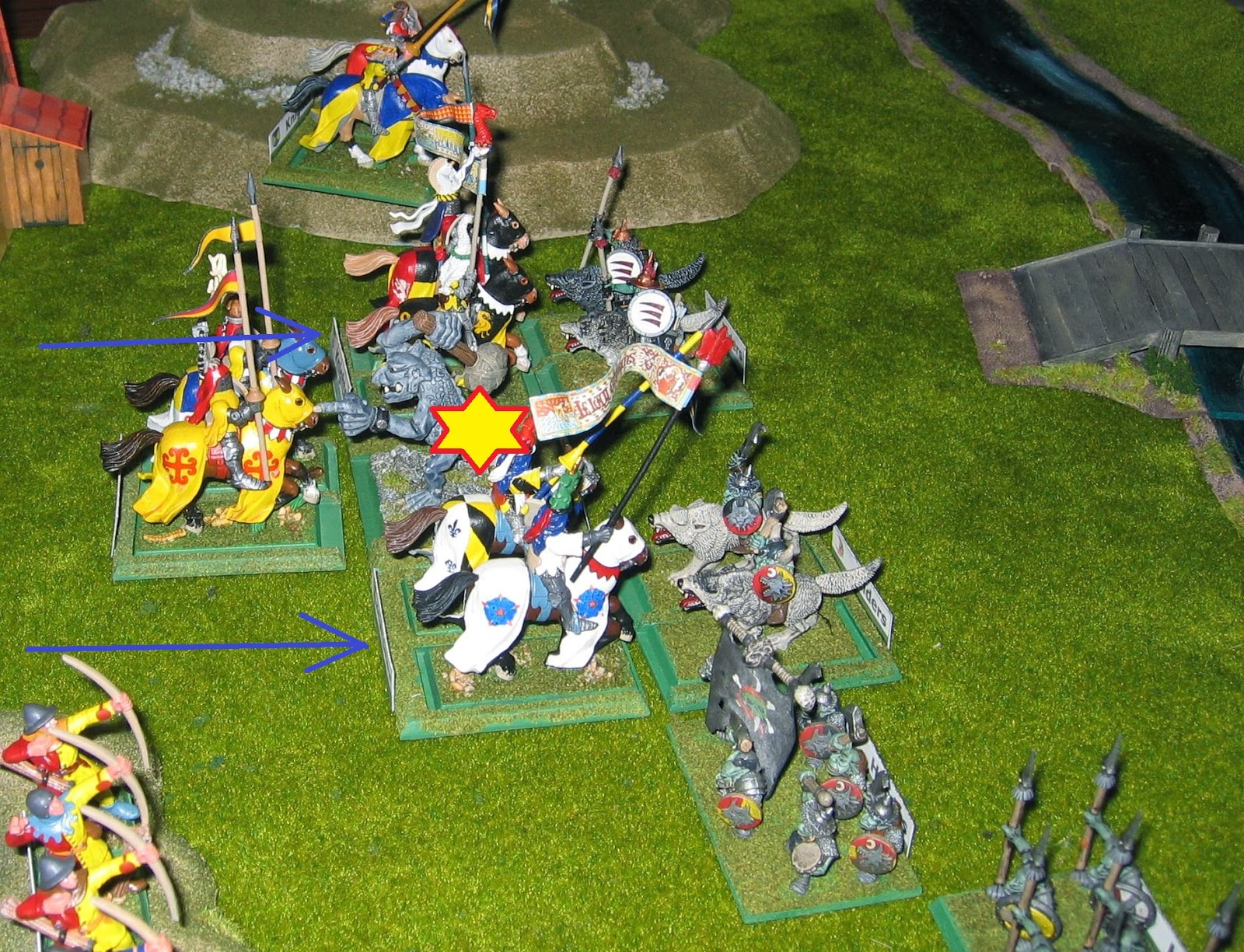 The knights advanced relentlessly.  They continued to push back the goblin riders, though the evil player hoped that a nearby troll would be an anchor of solidity to help stem the flow.  Sadly for him, the troll was skewered and crushed by the knights.  They barely even worked up a sweat over that fight, though normally this wouldn't be a particularly good match up for the knights! 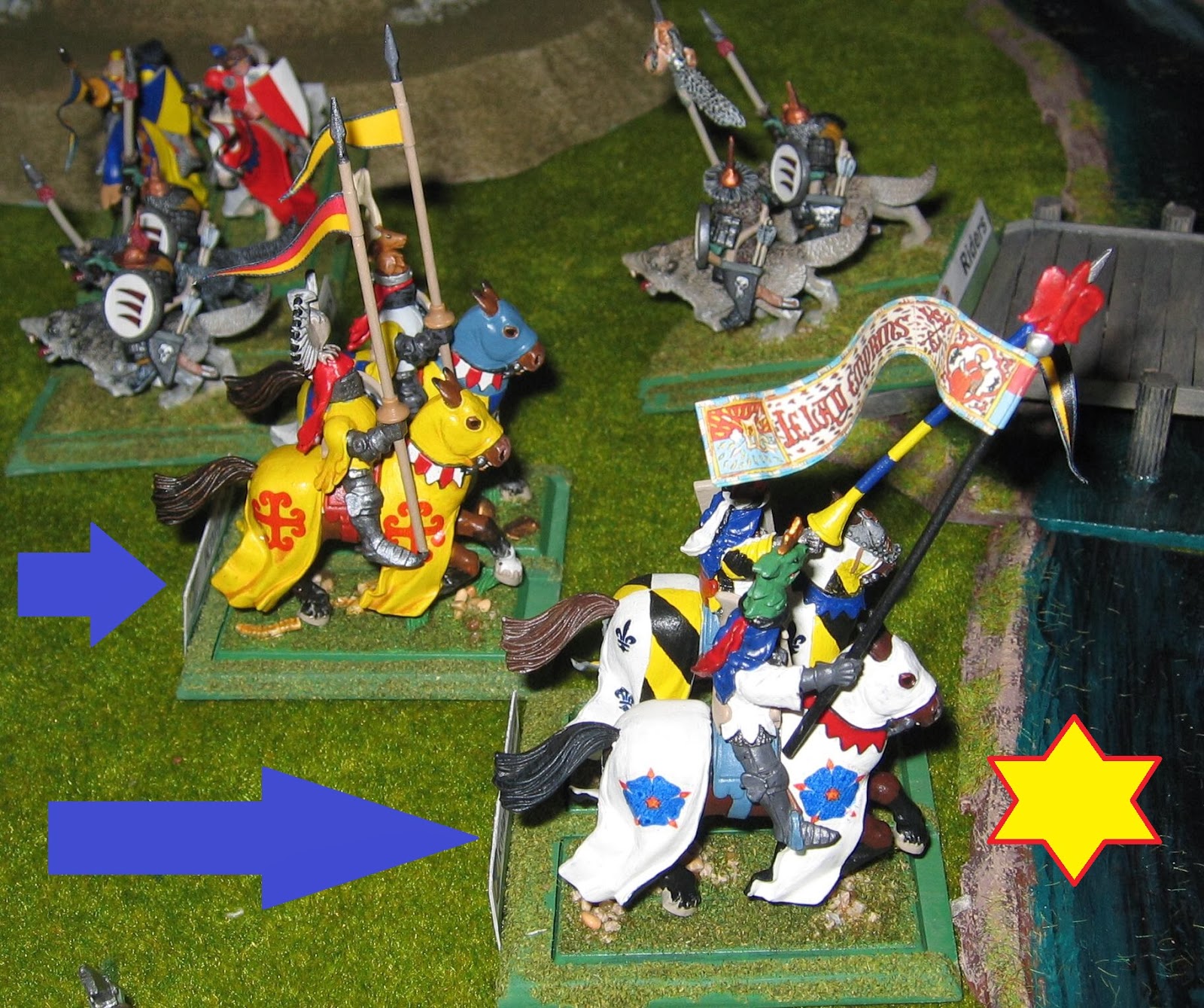 Shortly after that, the knight general pushed the goblin riders backwards into the river, where they drowned. 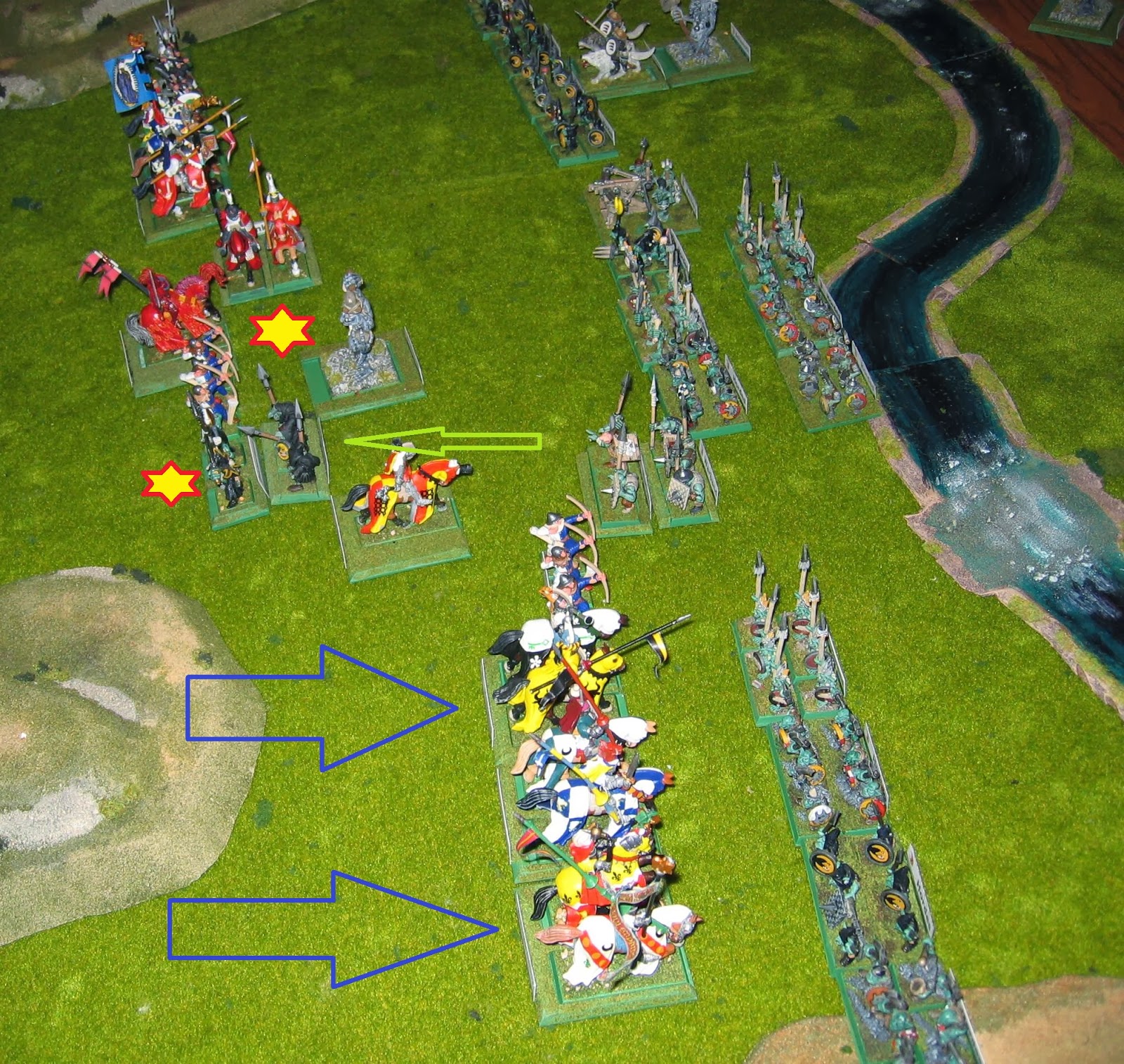 To the south, all of knights continued to advance.  The goblin commander hastily arranged a line of hordes to oppose them, though this looked like quite a forlorn hope.

The central command of knights were slowed down by a couple of trolls.  These were unsupported (the goblin hordes watched from afar), but still the 2 behemoths held up their foes just long enough for the goblin warband general to counterattack successfully and kill some of the horsemen.

Both the trolls were quickly despatched - at which point the goblin general suddenly realised how precarious his position was.  The black-robed chieftain and his bodyguard were slaughtered as 2 heroes (the Red Knight and Sir Roger the Castellan) circled round them and then attacked simultaneously from both sides.  This left the entire goblin force without any effective leadership. 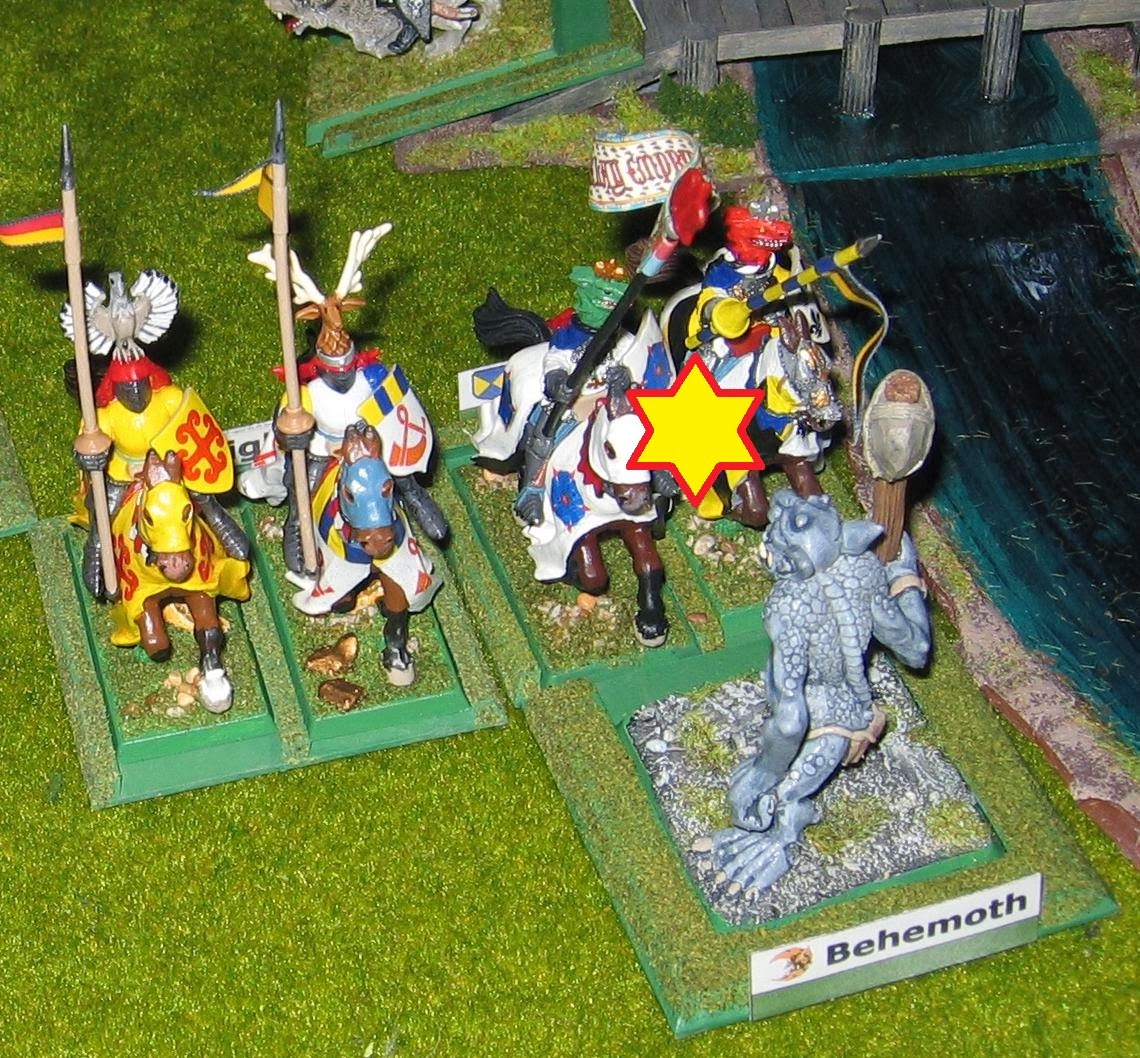 Back near the bridge, the penultimate troll counterattacked the knight general.  The monster may have been dim-witted, but it was still strong enough to pulp its opponent and thus leave the northern knights leaderless. 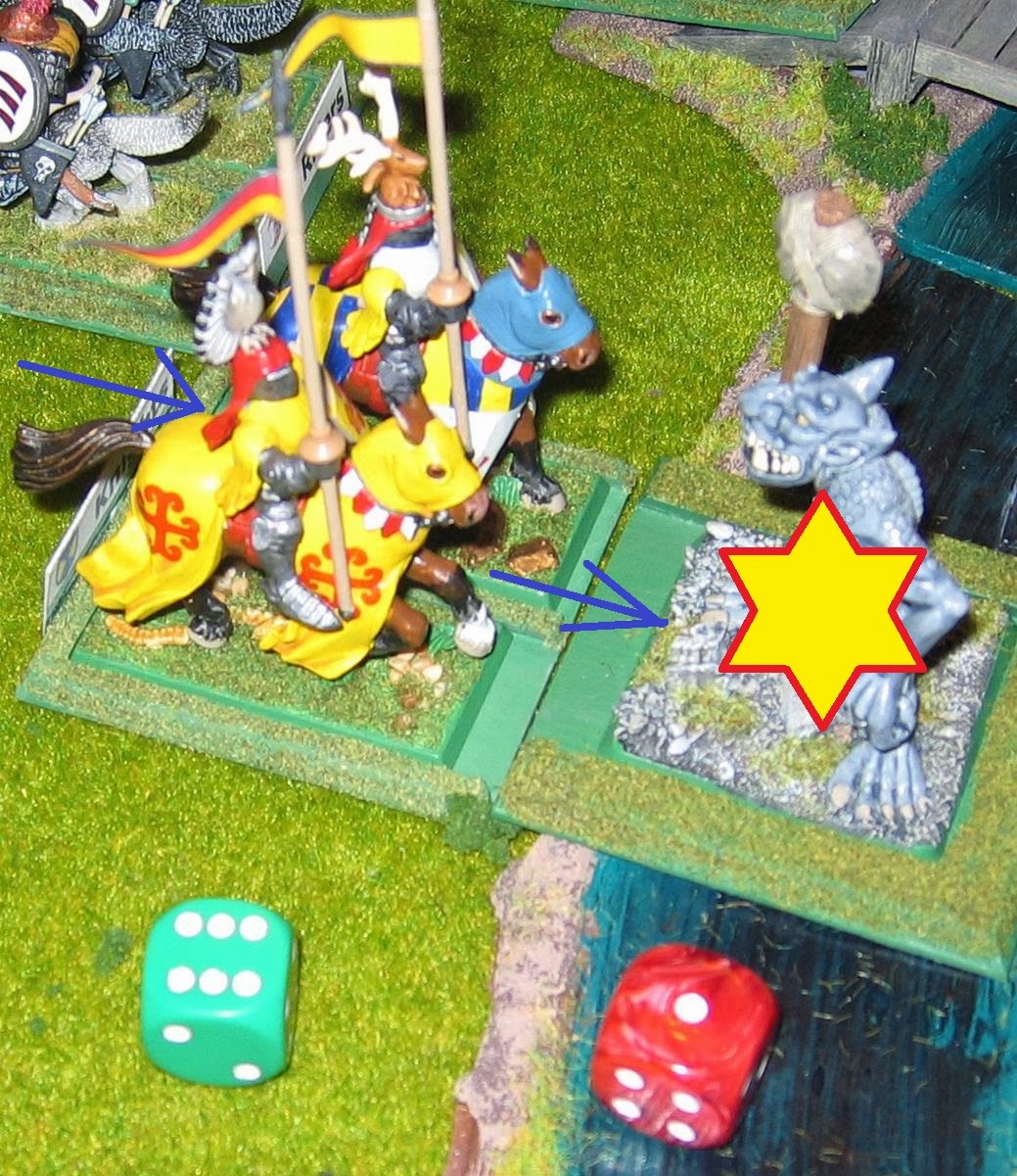 The loss of their commander merely served to infuriate the other knights, though.  In a fit of righteous fury, they drove the troll backwards into the river, where it sank like a stone (though some say that it survived the battle by hiding under the nearby bridge and that in later years it terrorised passers by until it was eventually slain by a billy goat). 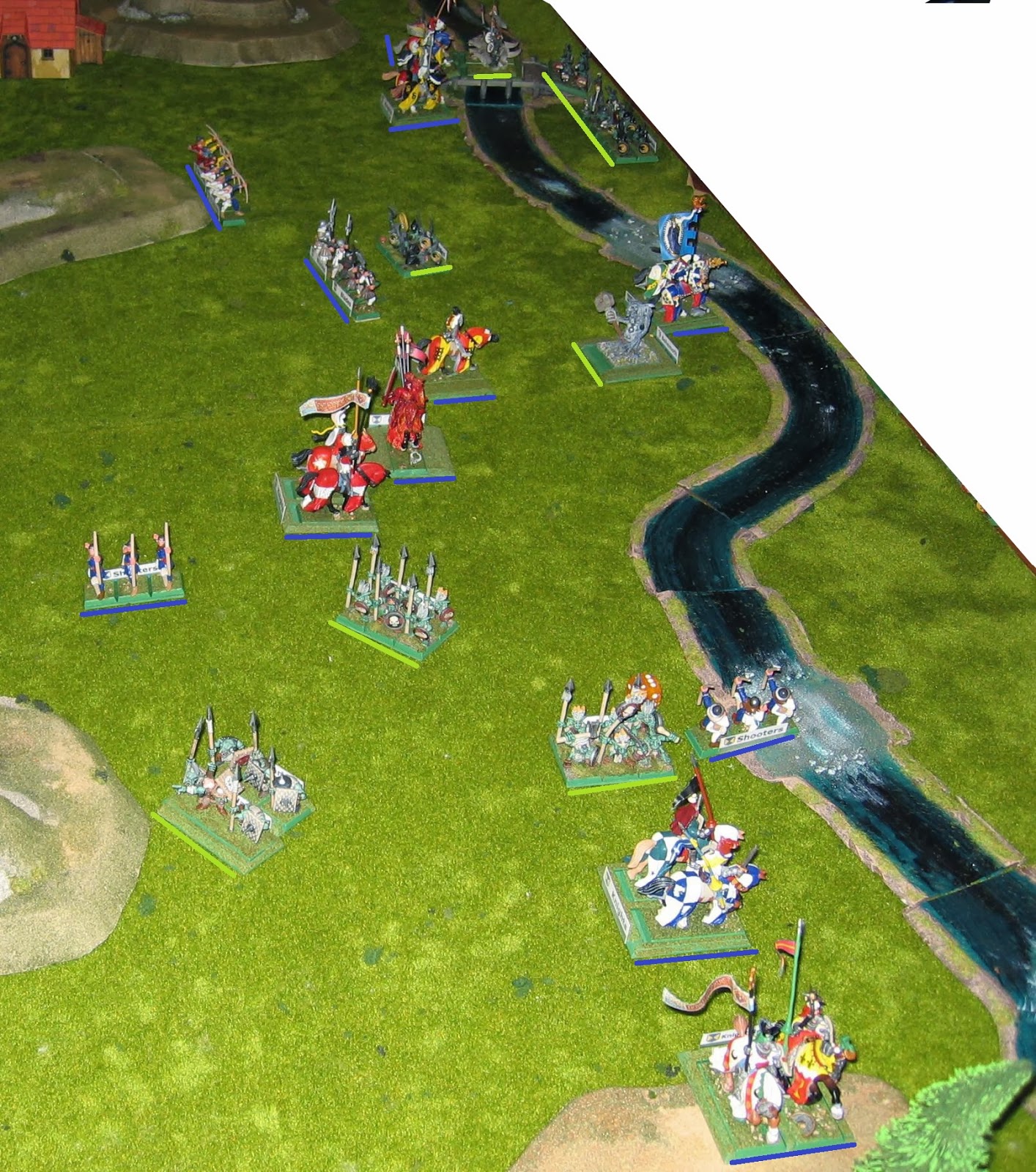 Towards the end of the battle, the remaining forces on both sides were scattered widely.  The knights had taken quite a few losses (mainly through recklessness), but that was nothing compared to the devastation visited on the much larger goblin force.  A few goblins attempted to escape through the gaps in the ranks of their enemies, but most just huddled together and prayed for nightfall so that they could slip away undetected. 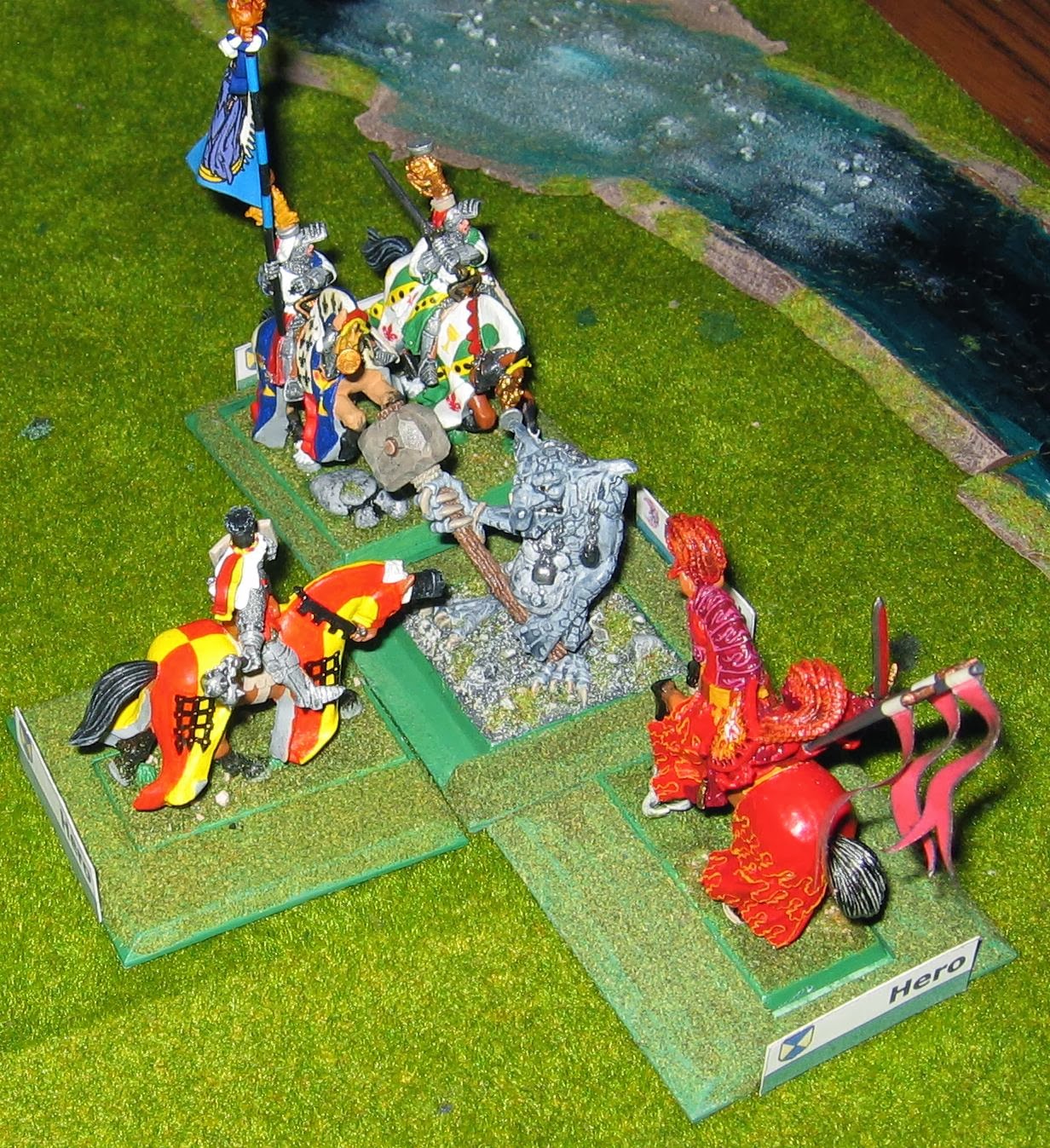 The last troll stood alone, puzzled and confused, as the 2 heroes and central knight general all charged him at once.  The poor creature didn't stand a chance... 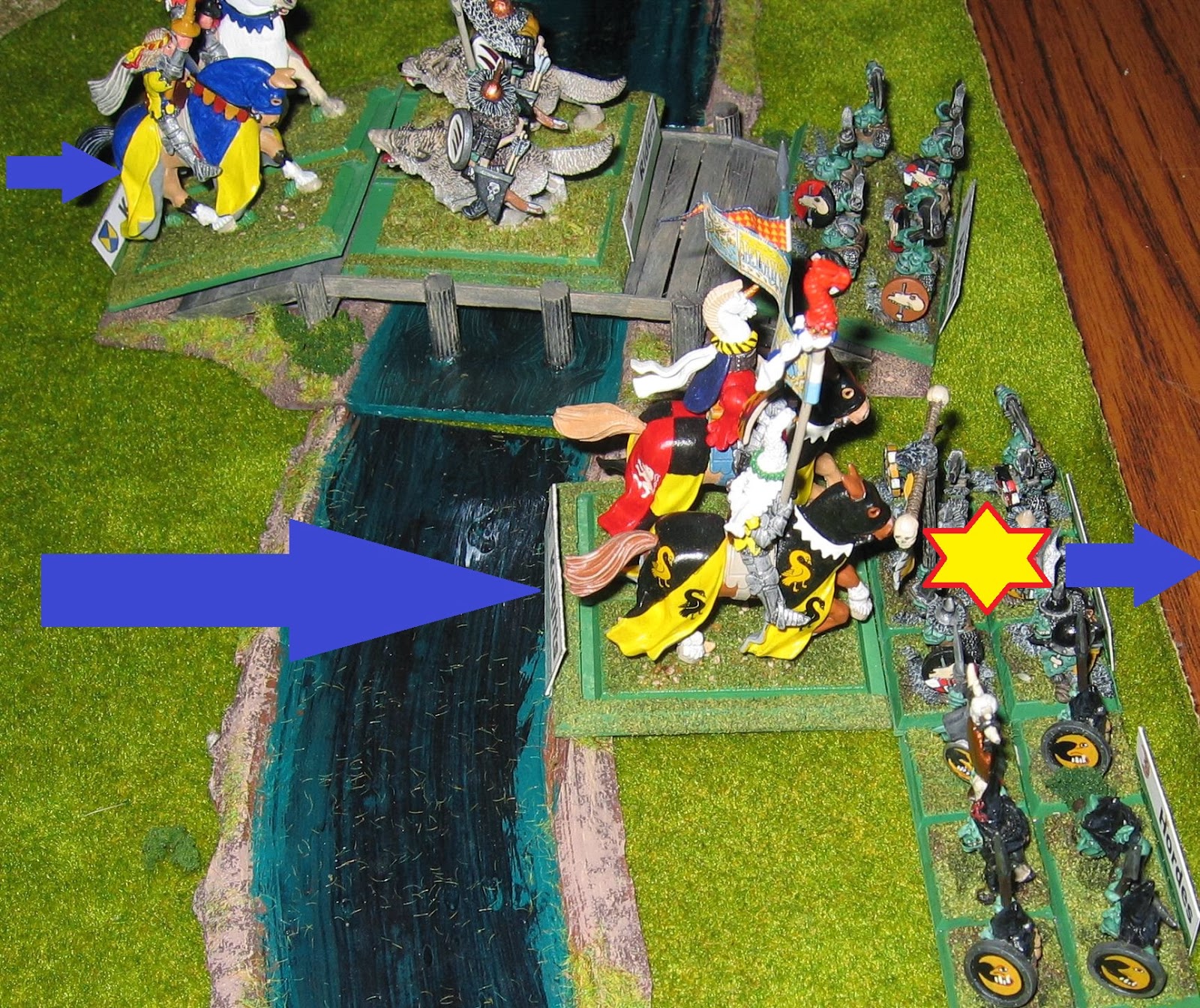 In a final show of bravado, some of the bolder knights waded across the river without waiting for any backup.  They crashed through the huddled goblins who opposed them and managed to exit the table, just as we had to call time on the game!

I had wondered if handicapping the knights' numbers and the goblins' leadership would cancel each other out.  However, right from the start the knights just crushed everything that was put in front of them.  Only in the centre were they slowed down (by 2 trolls and several greater goblin warbands).

It's not as if the knights' strategy was particularly cunning or anything; they just didn't want to stop.  Admittedly the goblin generals made some slightly questionable tactical decisions and some terrible dice rolls, but even so I'm completely surprised at the magnitude of the victory.

One element of knights had left the table when we packed up, but there was no real doubt that the rest of the army could follow them whenever it chose to do so (i.e. when they got tired of picking off goblin stragglers).  This was a total victory for the forces of Lyonesse, though not without some loss...