Once again, I've let my imagination run away with me.  A few months ago, Warlord Games had a sale on individual plastic sprues.  I bought some ECW cavalry to bolster my Witch Hunters, but I couldn't resist also buying some Ancient Greeks.  Since then, I've extended this set with a few metal models from Black Tree Design as well.  I can now present to you my latest project: Jason and the Argonauts!

First up are 4 Greeks with swords.  3 of the 4 are in heavy, decorated armour; these are the main heroes Jason, Meleager and Augeas.  On the other hand, Iphitos is just dressed in a linen tunic.  I imagine him as the servant or camp cook who has grabbed a weapon when all seems lost (i.e. he turns out to be of noble birth after all!). 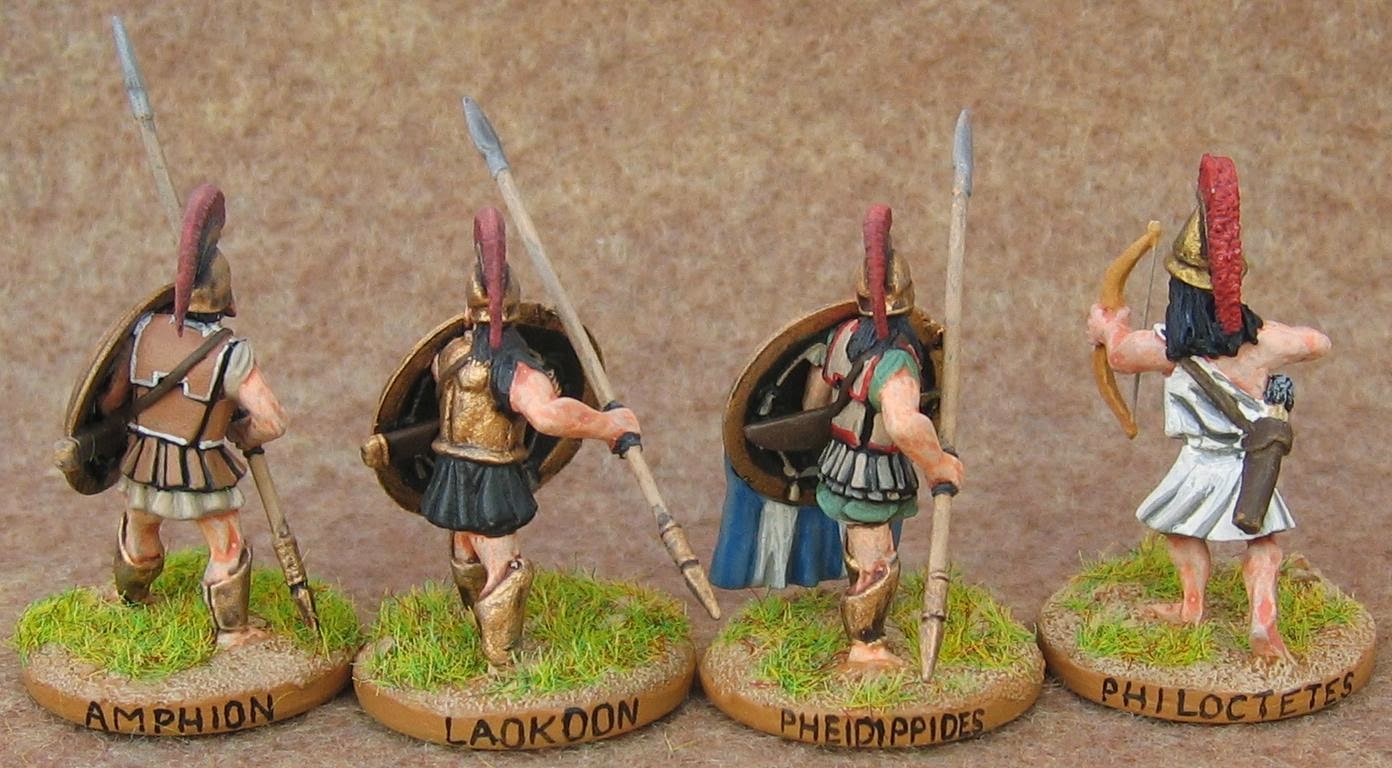 The next 4 models are minor heroes (or grunts, if you prefer!).  Amphion, Laokoon and Pheidippides are equipped in classic hoplite style, with large shield, long spear and sword.  Philoctetes is something of a rarity: an ancient Greek archer.  As far as I know, the Greeks looked down upon archery to some extent, yet had some renowned archers amongst their heroes (Odysseus, for example).  I've never really managed to figure this out...

All of these models are plastics from Warlord Games, apart from the archer (he's from Black Tree Design).  I'm a bit annoyed about the silvering of the decals on the shields, since I spent a lot of effort preparing the surfaces in the hope of avoiding that.  Still, these's not much I can do about it now... 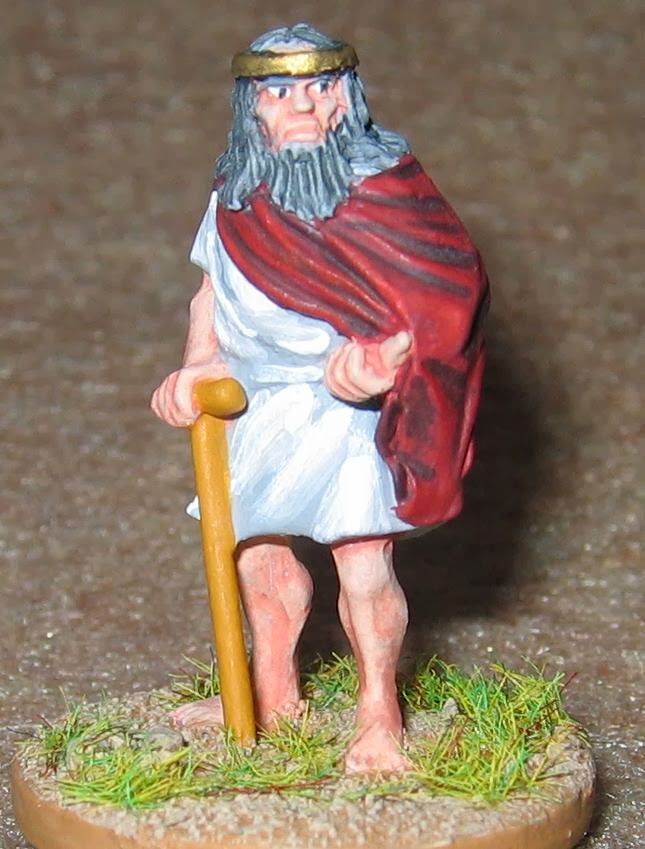 The leader for the enemies of the Argonauts is King Aeëtes of Colchis.  I've used another model from Black Tree Design here: Aeëtes is a Greek civilian to whom I have added a simple crown made out of green stuff.  Obviously, he's something of an ascetic monarch.

Aeëtes himself doesn't look very threatening, does he?  Well, in the legends he was the one who sowed the dragon's teeth, each of which grew into an armed warrior to oppose the Argonauts.  In the 1963 film Clash of the Titans, these were depicted as skeletons in one of the classic Hollywood fight scenes: here.  My "dragon's teeth" are faithful to that vision!

These figures are old Games Workshop skeleton warriors.  Those that had spears have been used unmodified, but I've cut down the oversized swords and scimitars to something more suitable for the ancient world.  I've added shields; I thought that these came from Magister Militum, but they've reworked their website recently and I cannot find the shields on the new site. 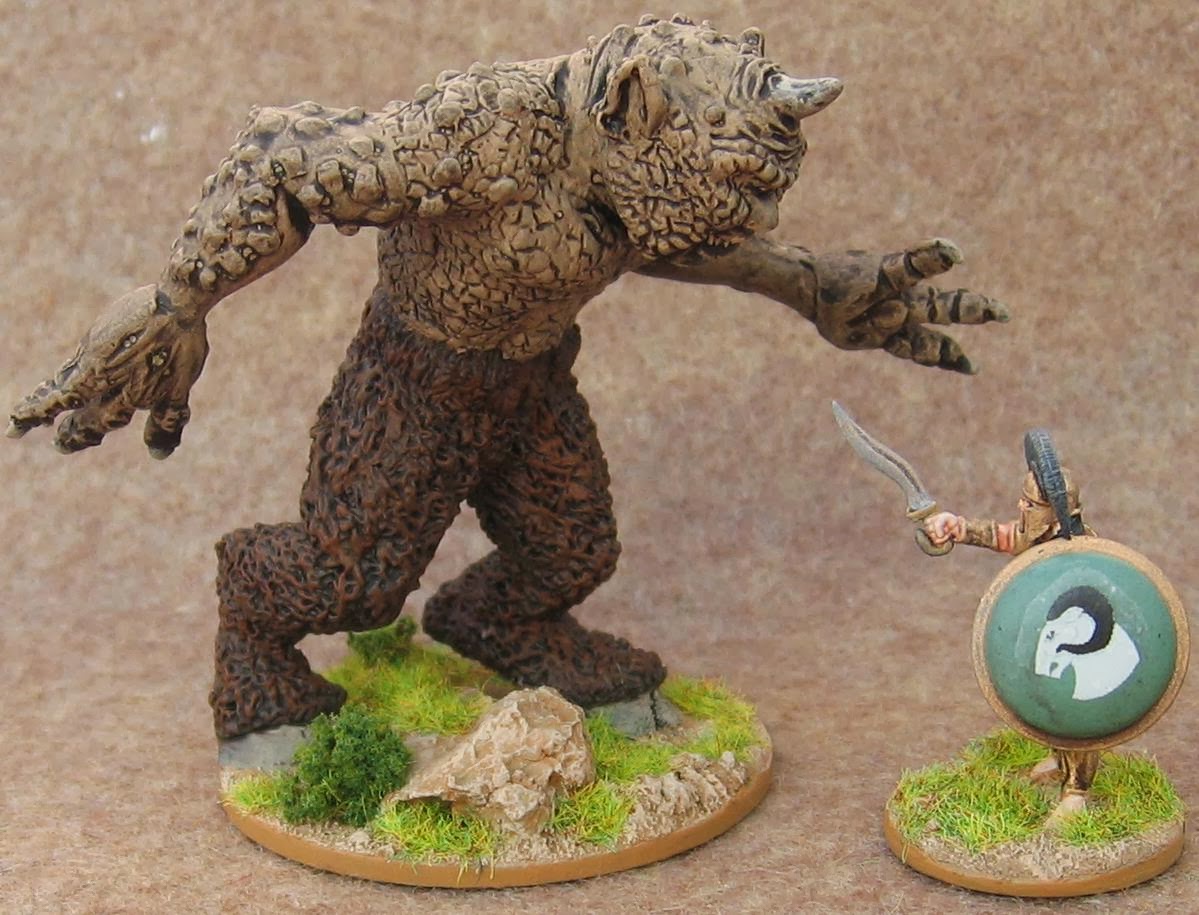 Another part of any ancient legend is at least one huge monster.  So far I've just got the one: a cyclops.  This is another Black Tree Design model; he looks exactly like the Harry Harryhausen version from the film mentioned above. 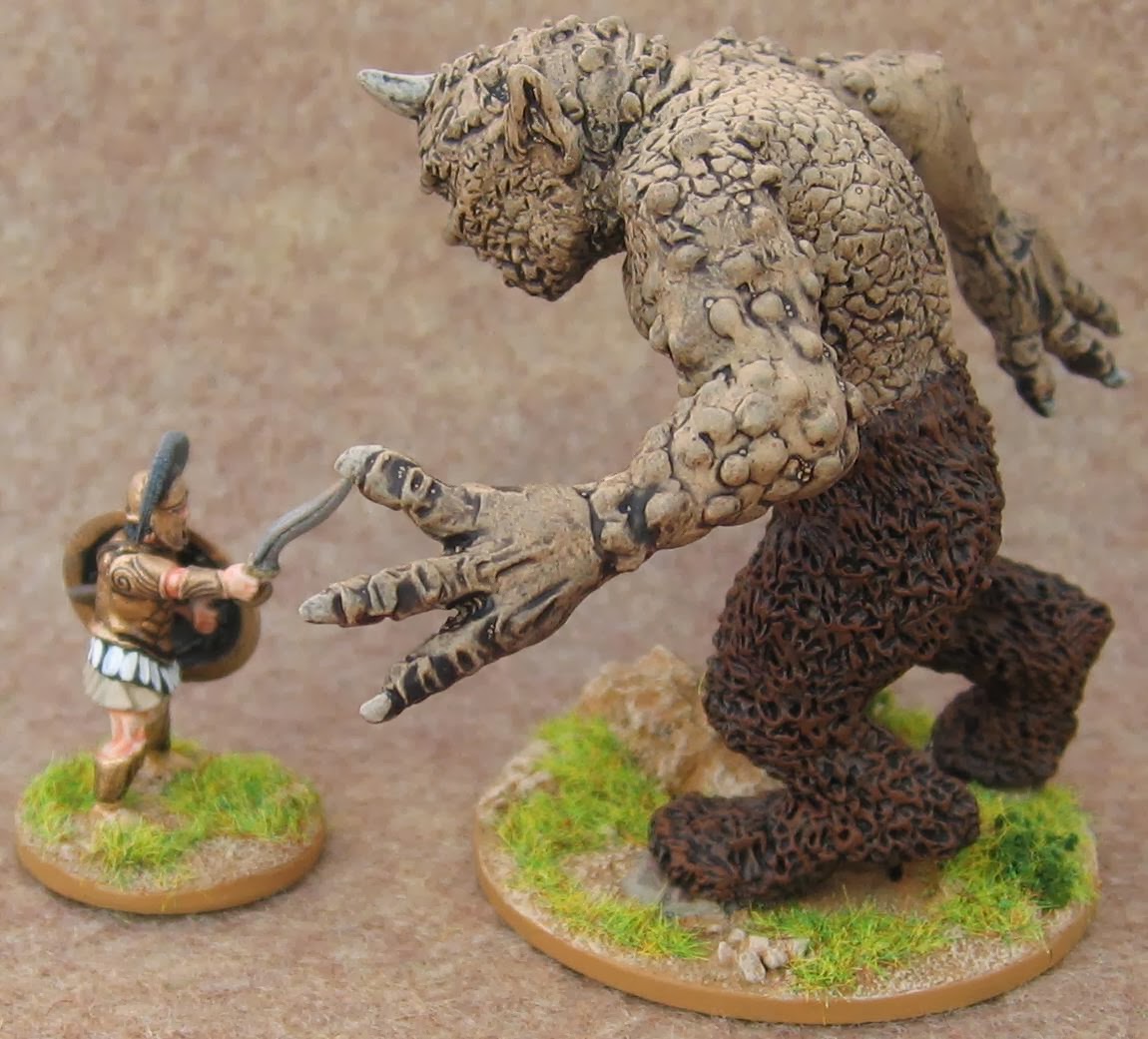 I've photographed the cyclops besides Jason to give him a sense of scale.  This critter is big! 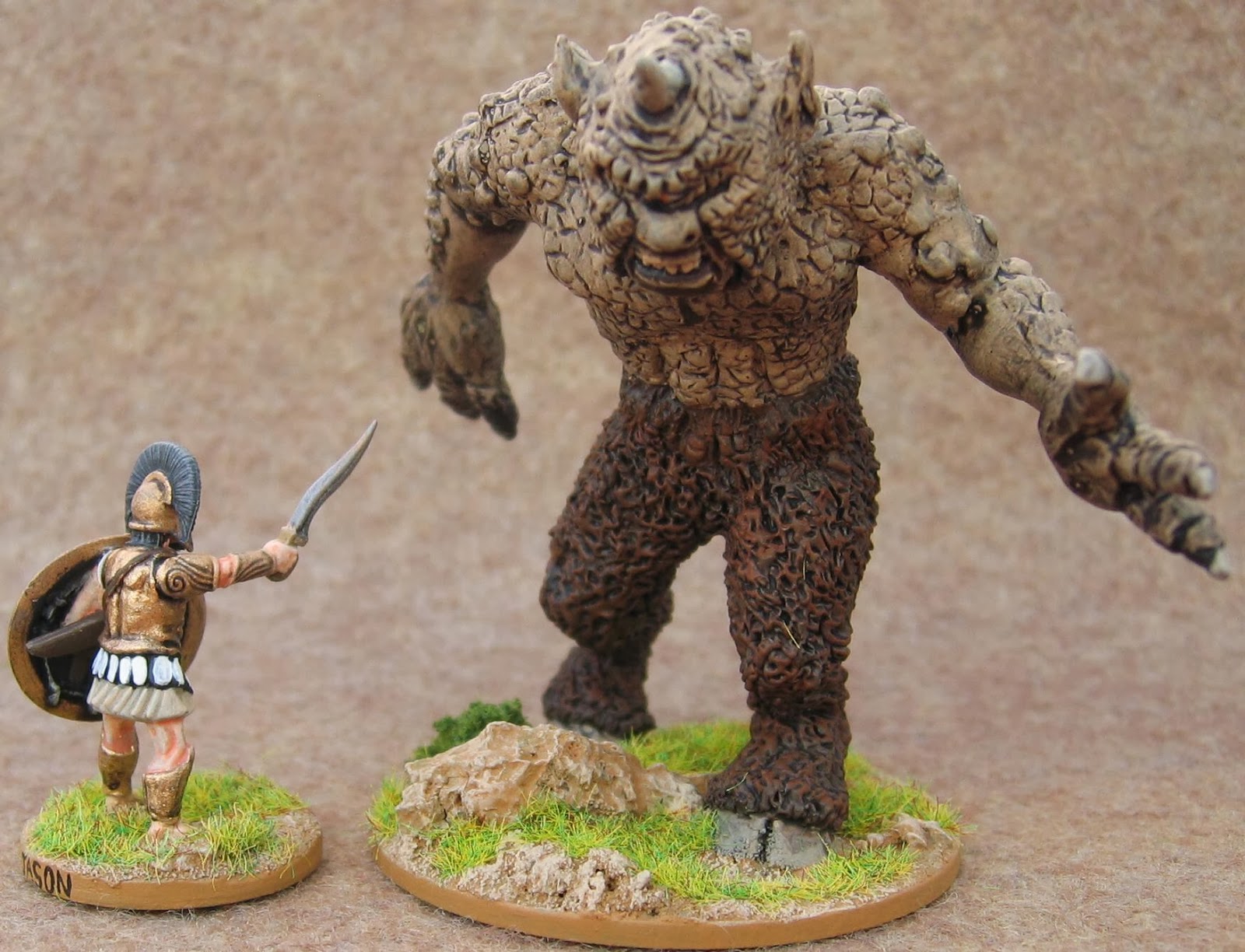 I couldn't really find an angle from which the cyclops' eye could be seen clearly.  I suppose that's because he's used to fighting creatures which are much smaller than he is, so he's always stooping and peering downwards.

Now that I've got some basic forces, I need some terrain.  I have some broken fluted columns that I bought many years ago, so a classic ruined Greek temple seems like a good idea.  The good guys probably need a few lighter troops - maybe some slingers and/or javelinmen.  For the monsters I would very much like some harpies, maybe a brass bull and a hydra (Foundry, I'm watching you!).  Then some cliffs, olive groves, a labyrinth or 2, a few forbidden islands...
Posted by Colgar6 at 17:12