We're going to Salute this year!  My boys and I will be visiting London for a few nights to do a little sight-seeing and to visit the biggest single-day wargaming event in the world.  It'll be quite the adventure for them, I think!

It's not the first time that I've ever been to Salute, but it will be the first time since I moved back to Scotland in 2001.  When I lived in Bristol, London was just a 2 hour train ride away and I would occasionally go there.  The last time I went to Salute, the show give-away was a Warlords "Demon Dice".  A few moments on Google suggests that this must have been the year 2000, so quite a few years ago... 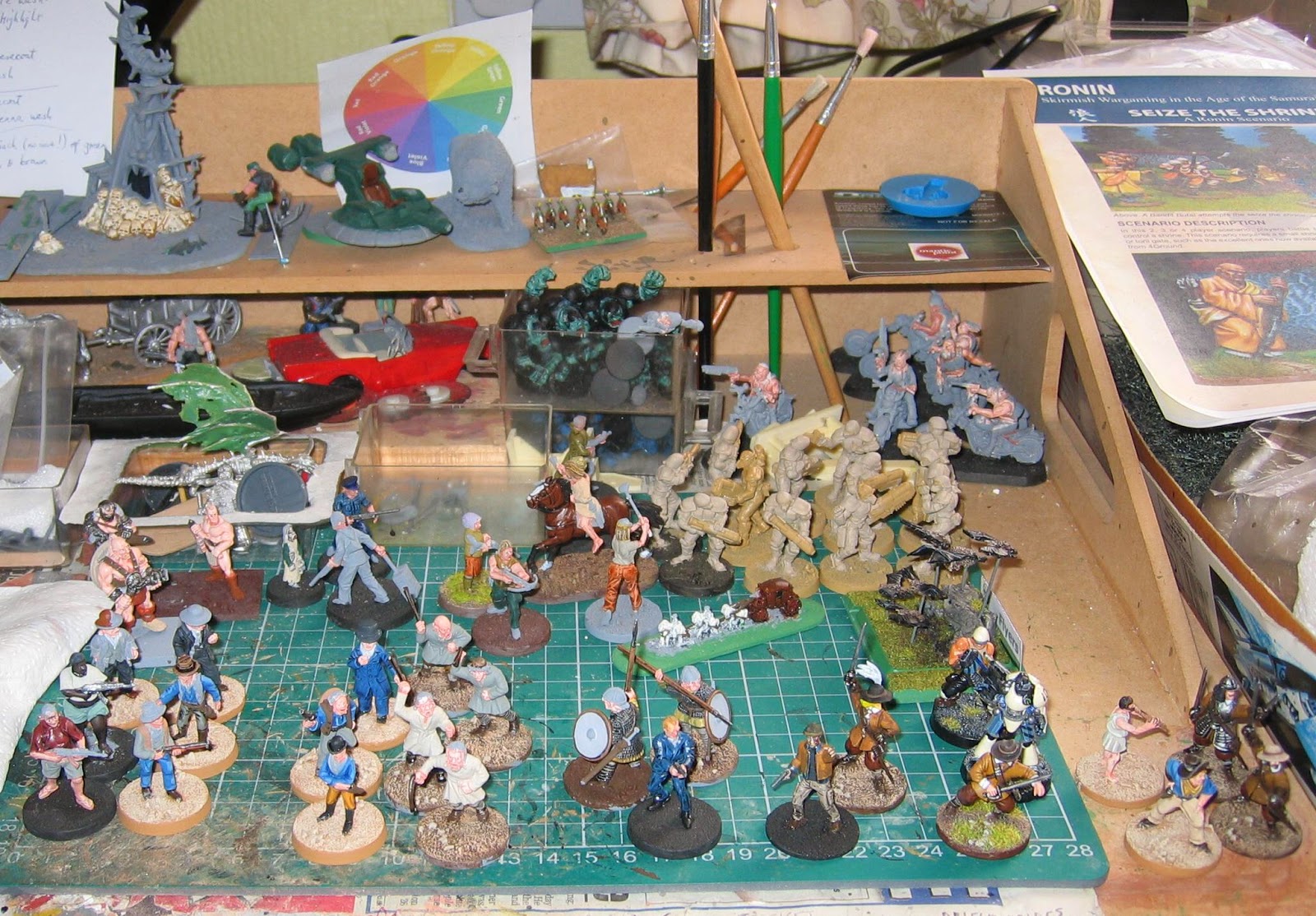 Now, here's a problem.  My workbench is already full of clutter and I think it's just possible that I might want to buy some fresh toys at the show next week.  There won't be anywhere to put new purchases!

I've tried to spend much of this last week in knuckling down and painting some of my existing models.  If I'm successful then that would free up some space.  I don't think it'll be enough, mind you, but I've got to try...

So, here are the results of my recent labours so far: 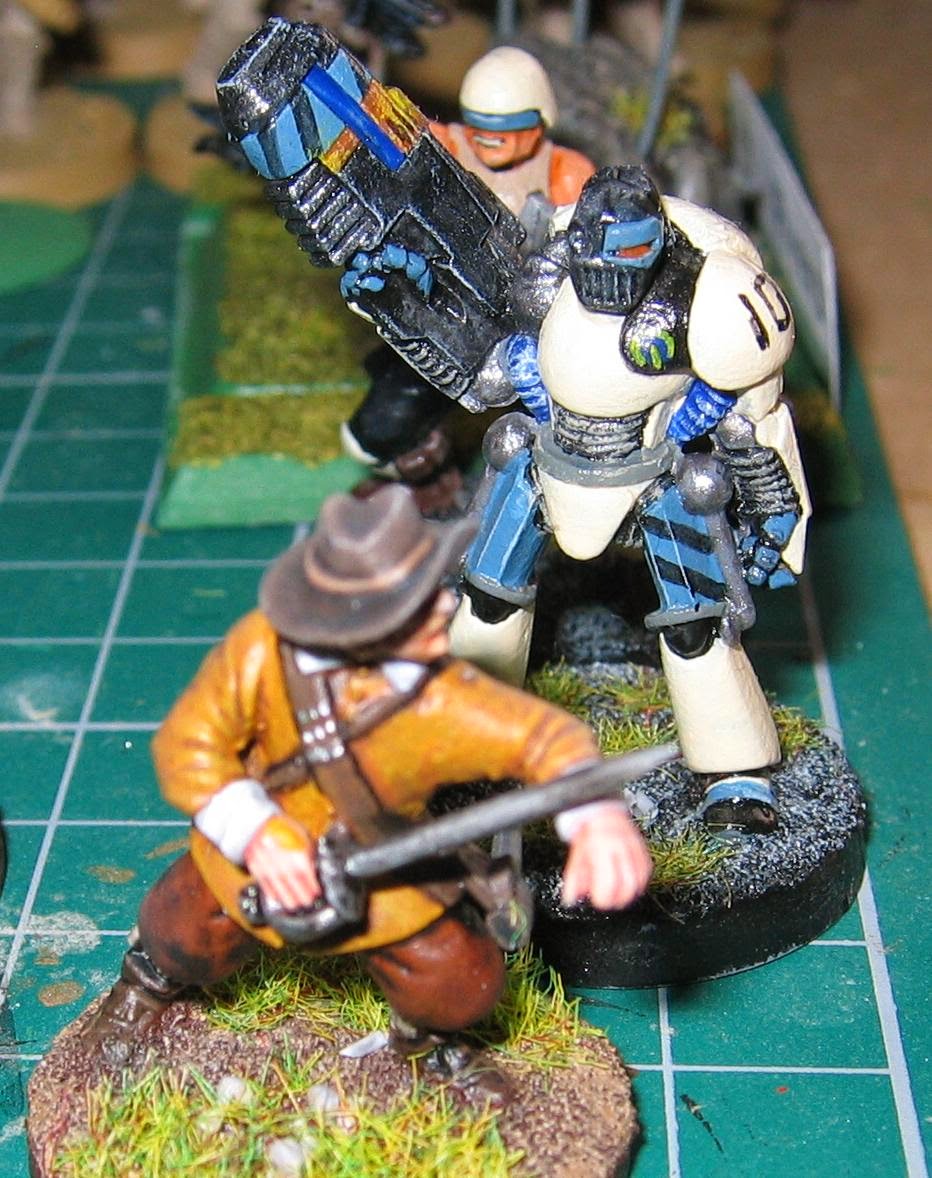 Actually, these figures aren't recently painted.  Rather, they're samples of previous work; I've got them out whilst painting more figures for the same forces so that I can match the styles and colours.  At least they don't need any finishing off before they can be put back into storage. 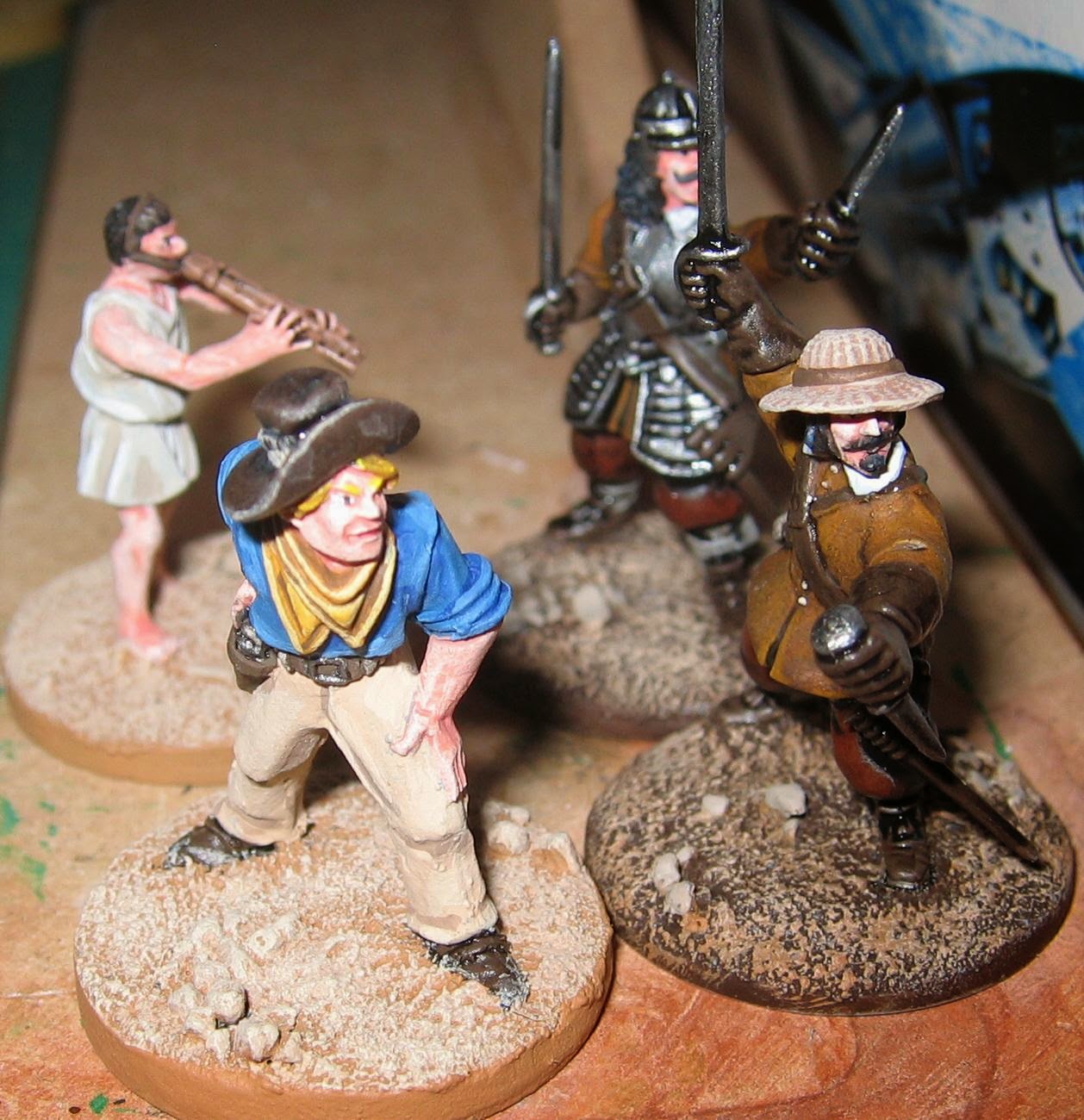 This quartet are almost done.  I need to add some grass to the bases and then varnish the models.  Neither of those tasks is very onerous, though it will probably take a day or two for the glue and sealant to dry. 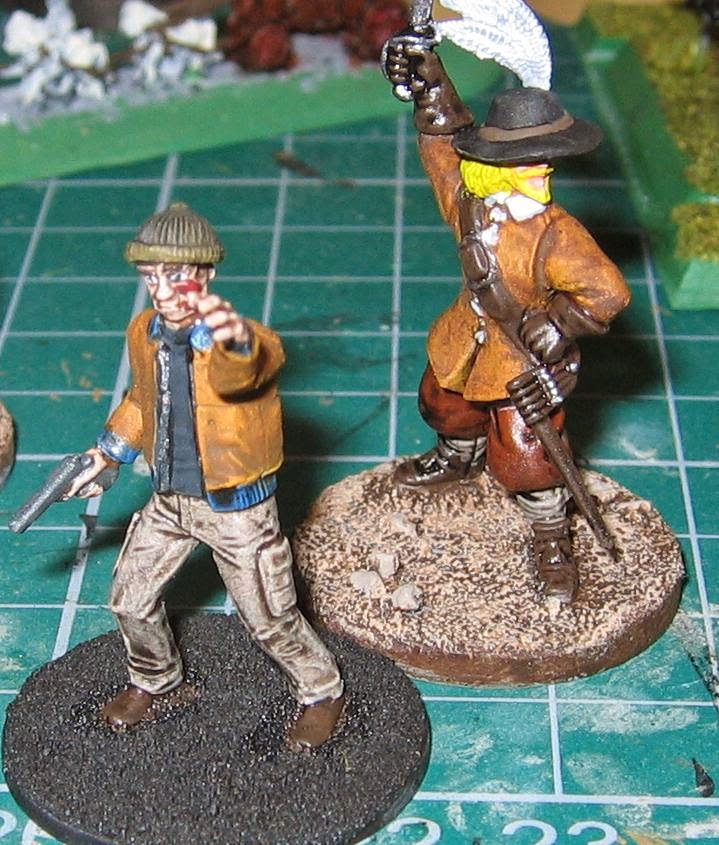 This pair are a little further off from complete, as both lack some minor detailing.  The armed zombie needs the base to be finished, whilst the cavalier will get work on the hair and hat.  I should be able to complete both models without too much difficulty, I think. 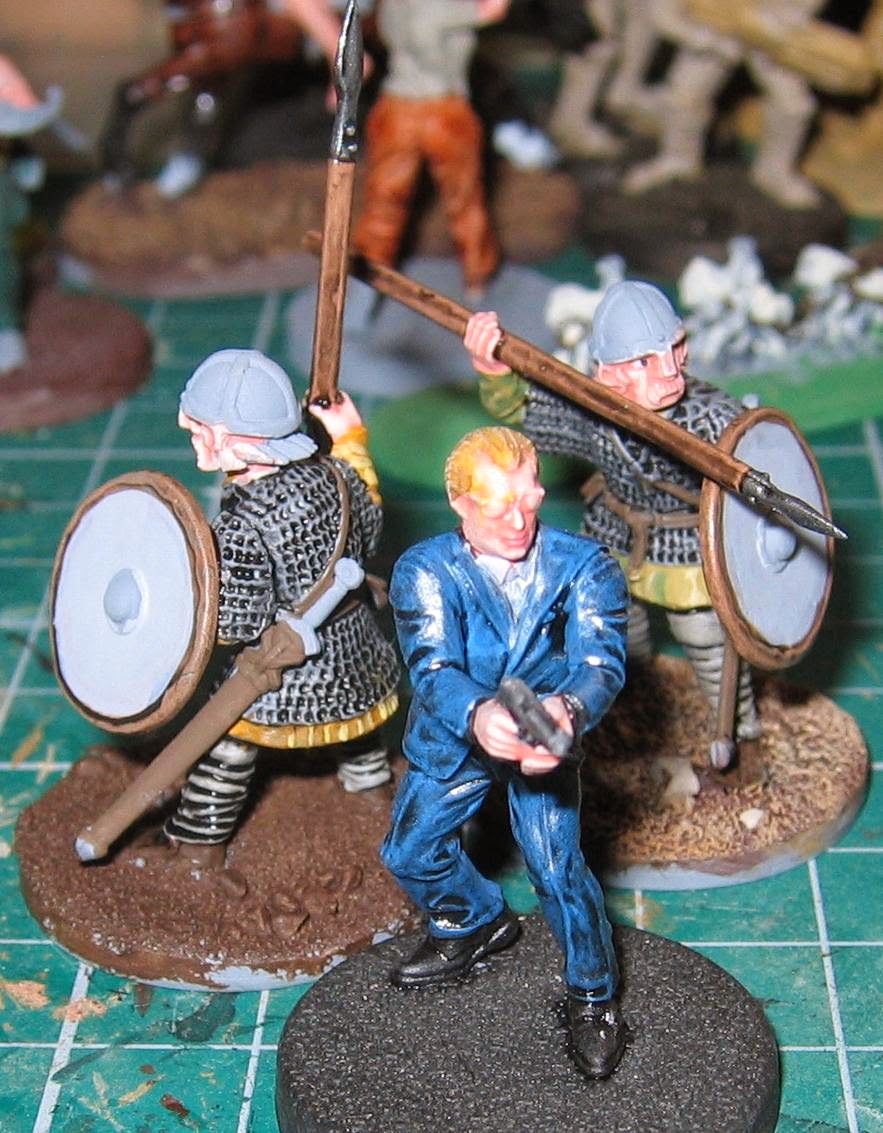 Slightly more effort will go into the next trio.  Although large parts of these models are finished, they have a substantial number of details still to do.  Bases, shirt & tie, shields, swords, helmets, hair... 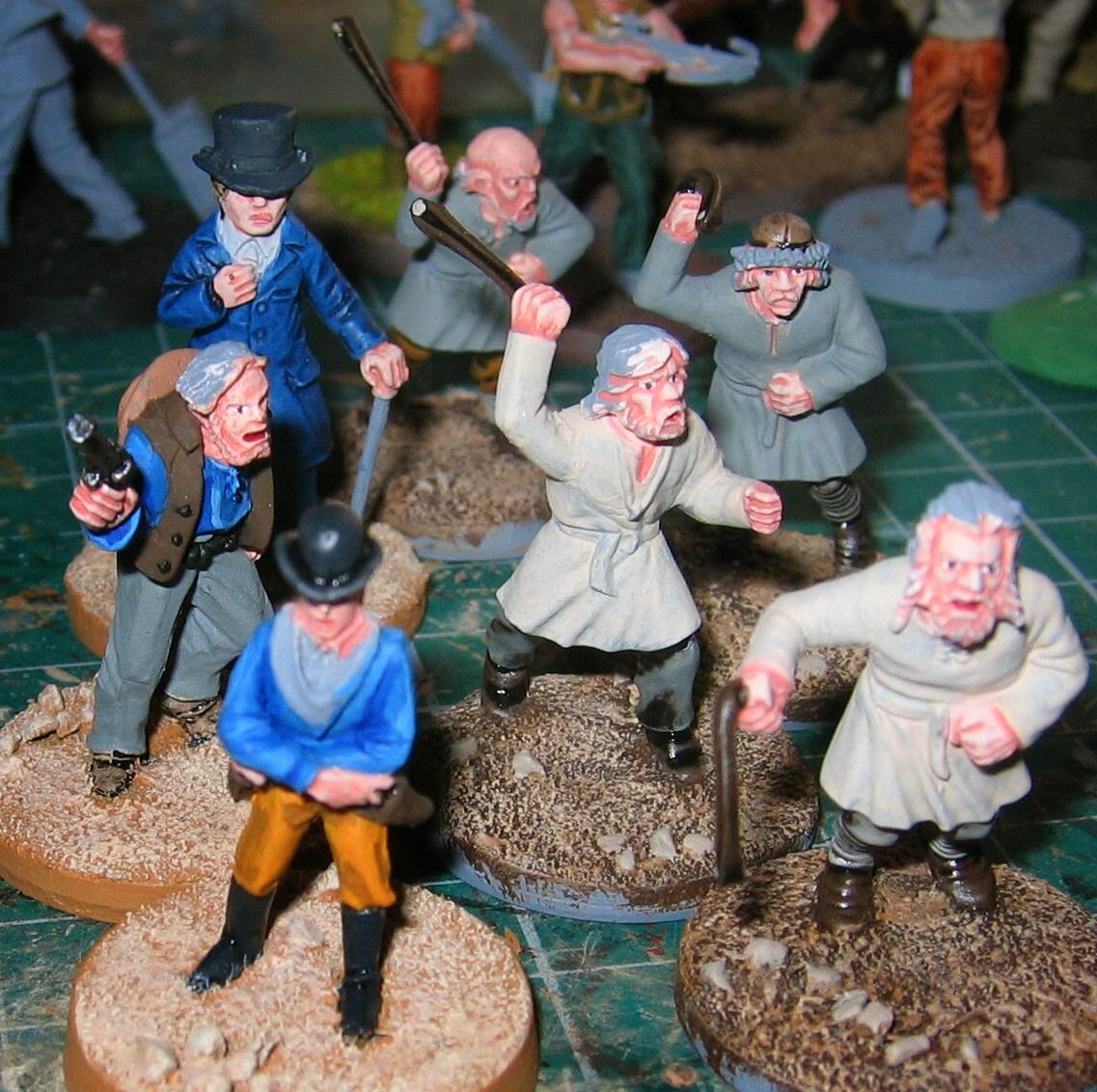 This group are even further behind.  They have most of their block colours done, but not all the big areas are textured, washed or shaded.  Obviously, details that sit on top of the block costume colours (belts, mostly) haven't been started either. 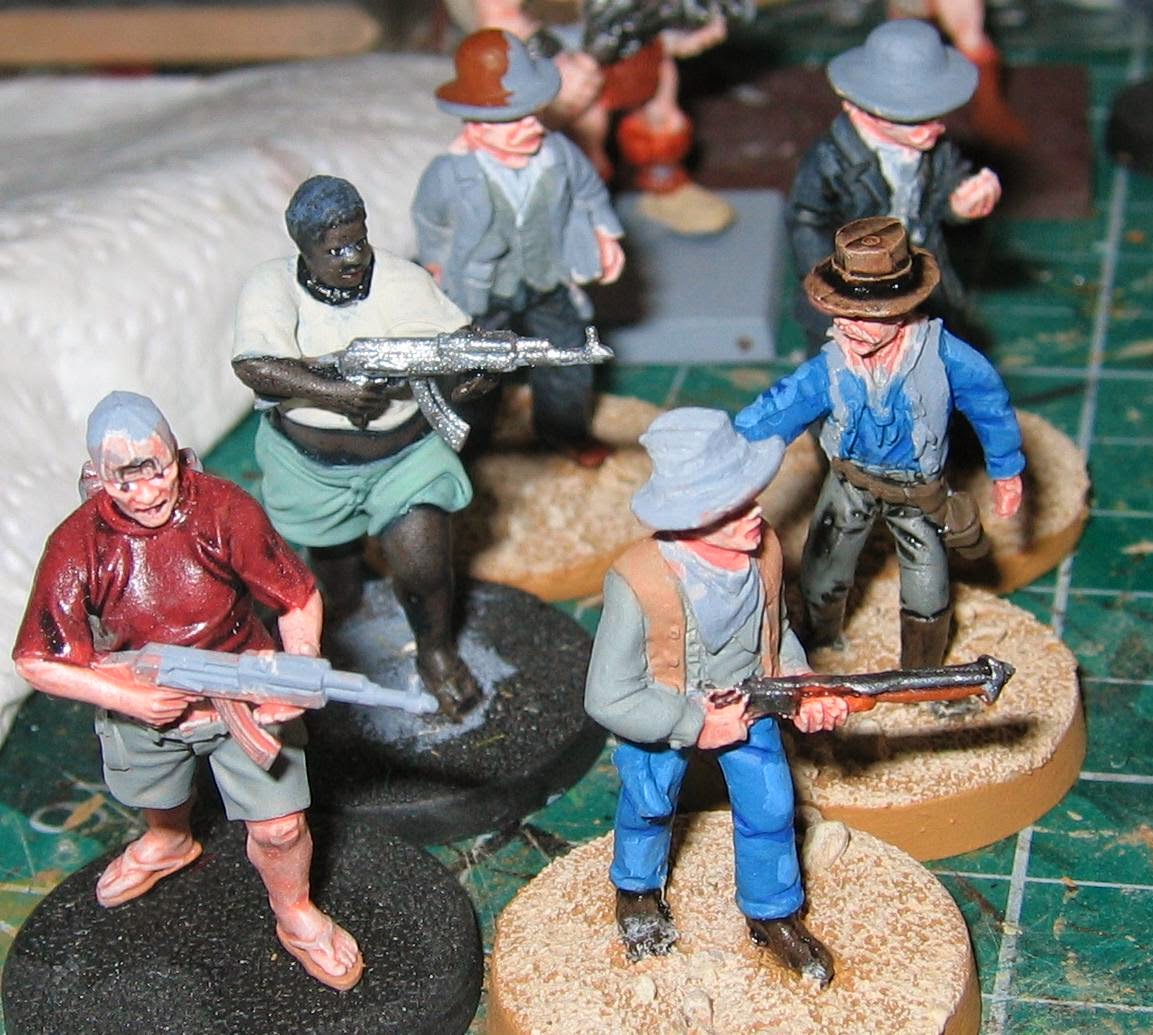 Finally, I might struggle to finish this set before Salute.  They have some of their base colours, but there are still large patches of undercoat, or perhaps colours that I'm thinking of changing.  Still, they are a long way from "just under-coated" and there is at least a slim chance that I'll paint them in the next 3 days.

Maybe I should just get on with the job, rather than sitting here writing about it?!
Posted by Colgar6 at 17:43