For a long time now, I have been looking for a set of wargames rules that will allow me to portray a medieval joust.  I want knights charging at each other with blunted lances whilst the lords and ladies watch from the galleries and spectators of the lower social orders shout raucously!  The look and feel that I am after is very much that portrayed in the lightweight (but fun) 2001 film "A Knight's Tale".  It's a sports game, with winners and losers, underdogs, heroes and villains!

There aren't many suitable sets of rules for jousts about.  I am aware of maybe 3 or 4 different commercial titles, along with a number of medieval or fantasy skirmish rules which have at least some provision for jousting.  None of these really meets my requirements, which are primarily:

It was with great interest that I heard recently of a new set of rules entitled "Crossed Lance's" [sic].  The authors of this have gone to town with support; as well as the rulebook on their website you can buy miniatures of knights, squires, heralds &c, transfers/decals for heraldry, game accessories (cards and tokens), scenery (tents, grandstands, tilt barriers and the like) and so on.  All of this is very impressive, as is the promise to produce another volume of rules for other parts of the tournament.  I believe that this second volume will contain rules for the archery competition and the foot melee.  I thoroughly applaud this level of dedication! 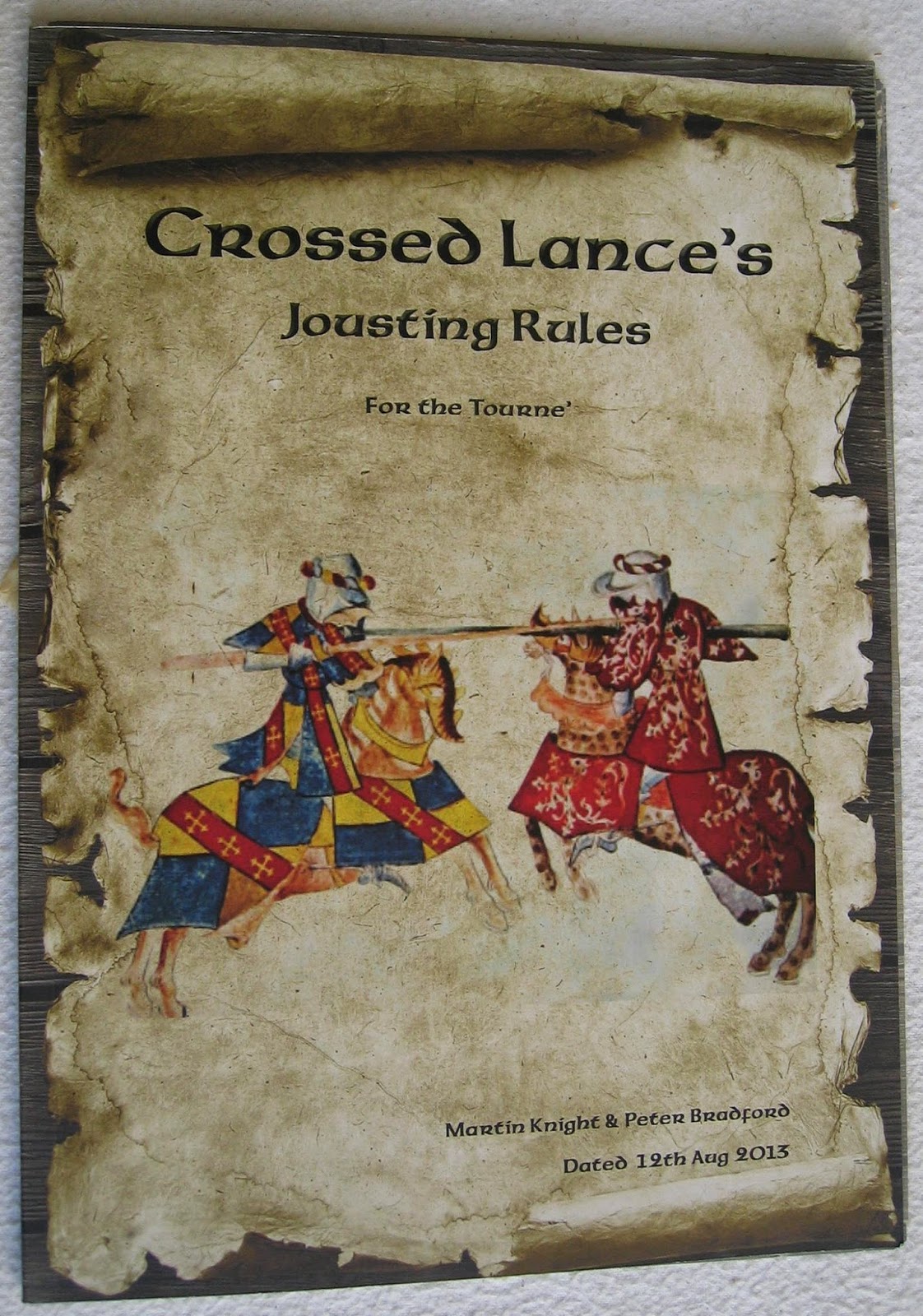 So, what about the main offering: the jousting rules?  Physically this is an A4 book of 46 pages, coloured as if it were old parchment.  The covers are soft and I believe the correct term for the way the book is constructed is "gum binding".  It's not going to be easy to open the book flat without breaking the spine.

Within this booklet there are actually rules for 2 separate games:
This is less than half of the booklet; the remaining 26 pages are for forewords, introductions and a short historical overview.  Nearly half of the pages in the book are game components which may be cut out, though in my copy there was a large set of replacement inserts and a small note that explained that the original components couldn't be used double-sided due to a registration error when they were printed. 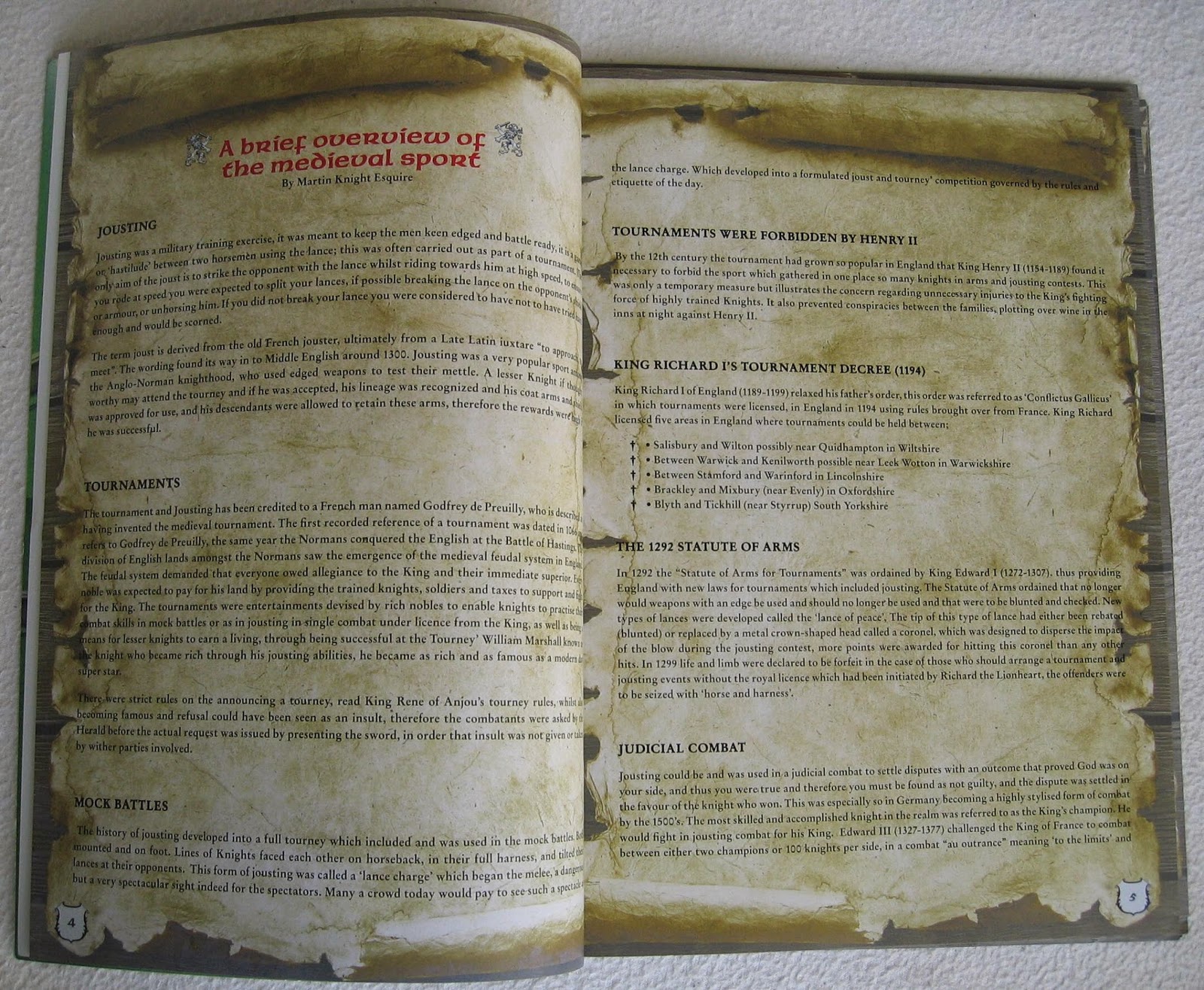 So, at the simplest, here's what happens.  2 suitable models of knights on horseback are placed at opposite ends of the tilt.  According to the rulebook, the tilt barrier should be at least 18" long; it's convenient if it is discreetly marked off in inches.  The central 6" (or 4" in some paragraphs?) is the "attain" zone, where strikes may occur.  Note that a "lesser attain" may be scored if the knights have passed each other and moved beyond this zone without making full contact.

A joust comprises 3 runs, though this may be cut short if either knight is unhorsed.  If neither knight has achieved such a victory after 3 runs then the winner is decided by the number of points scored.

At the start of the joust, each player draws 3 "shield" cards and plays them face-down in the order that they desire.  1 such card is revealed at the end of each run, when it is used to adjust the number of points awarded for the run (from +3 to -3).  In addition, each player has a single "Lord" card, again with a hidden value from +3 to -3, which may be played only once, on any of the 3 runs.

For a run, each knight rolls 2 dice of different colours.  Their model is moved forwards by the sum of the dice, whilst the individual scores on the dice are used to determine the strength of a hit if contact is made.  Since the average score for 2d6 is '7' and since this movement will take a knight from his starting position into the attain area, the majority of runs will be resolved with a single throw.  A second round will only be needed if either knight rolls very low on their first round.

Once contact occurs, the outcome is determined by the dice already rolled.  Any double will unseat an opponent, with high doubles also knocking down the opponent's horse.  Otherwise, the dice are used to look up a chart and points are awarded (or lost, in the case of a foul) accordingly.  Points are adjusted by the shield card played for that run and optionally by the player's lord card as well.  And that's it...

The only provision for differentiating a knight's skill is by having a different pool of shield cards on which to draw.  I suppose that a better knight's pool might have more of these tokens with a value of +3 and fewer with a -3, whilst a poor jouster would have a collection of shield tokens that tended to be lower in value.

Since my main interest is the joust, I've not put as much effort into reading or trying out the second set of rules in the book.  However, here's a quick summary: each turn a knight secretly chooses 3 hex move cards.  These can take the form of an advance, a 60 degree turn or a halt in place.  When it's that knight's turn to act, the 3 cards are played in the chosen sequence and the actions on each card are enacted.  If any models come close enough then they fight each other: 2 dice are thrown and the result is read off a table.  Typically this will result in a number of hits to an opponent (this may be adjusted by playing a lord card), though it is also possible to lose a helm or shield or to be unhorsed.

So far I've restricted myself to describing the game(s) in a factual manner.  However, I cannot end this article without giving a personal reaction to Crossed Lances.  I really wanted to like this set of rules, but there are 2 areas in the joust that need to be mentioned:

1. The proof-reading in this publication is terrible!  It seemed that about 1 sentence in 2 either had grammatical mistakes in it or was just unclear to read.  If I hadn't had the games demonstrated to me at Salute 2014 then it would have been difficult to work out how to play from just reading the rules.  Here are some examples: 2. In theory there is some decision-making to be had: each player must decide in which order to play his/her 3 shield cards.  In practice, this seems irrelevant because:

I don't think that "Crossed Lances" is completely unplayable.  I certainly do like the idea of having a large tournament with a multitude of different events - jousting, grand melee, archery, foot melee - but for me there needs to be a bit more tactical play.  I'm already pondering house rules such as allowing the shield card to modify the dice roll (either for movement or for combat result) rather than the points scored.  That might make it more interesting.  However, I'm disappointed that I feel the need to change these rules before I can use them. 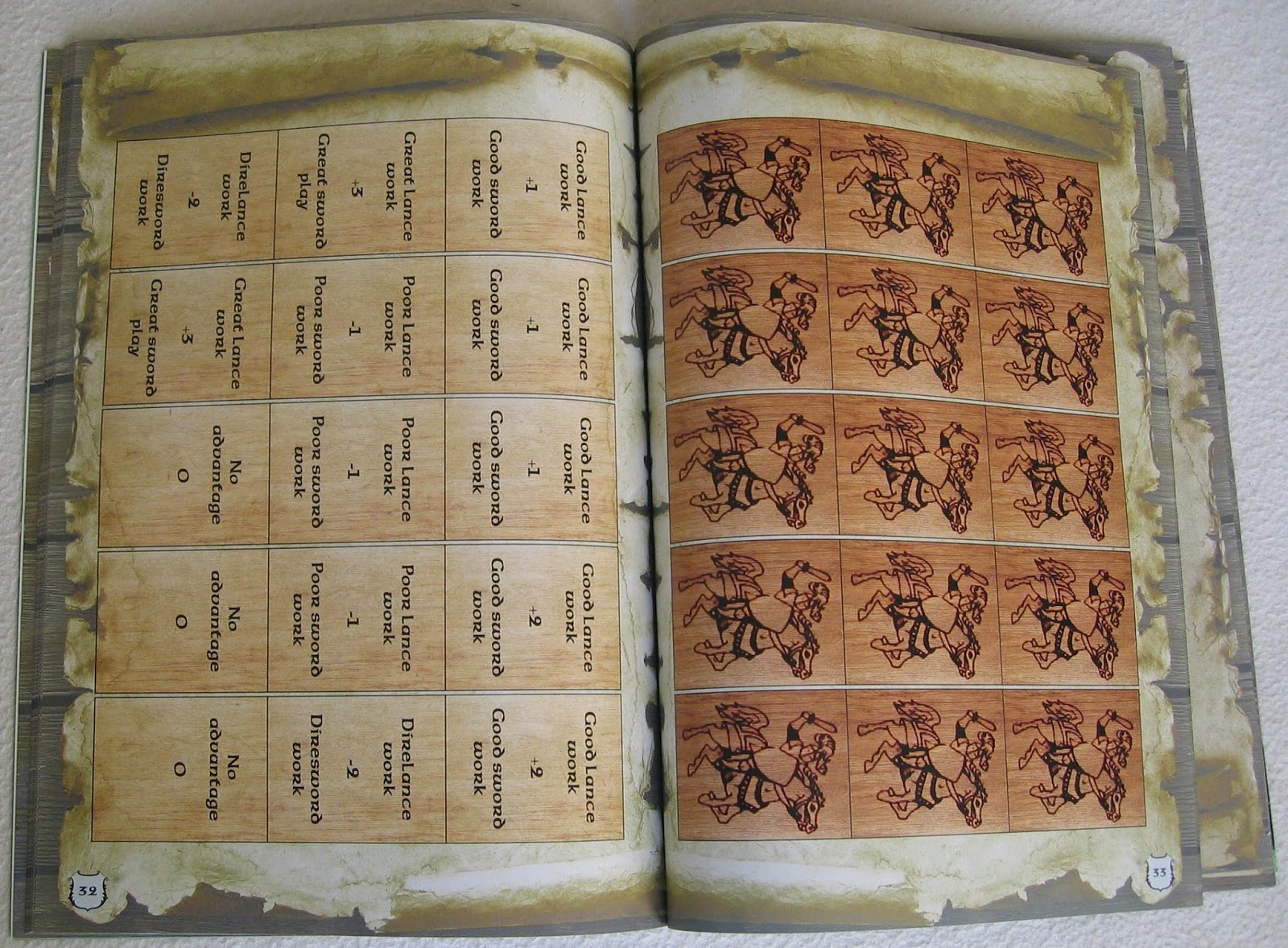 Components: 3/5 .  All the necessary cards are present in the rule book and are promised as PDF downloads as well.  I have some doubts about the durability of the thin paper and gum binding of the rule book.
Support: 5/5 .  There are clearly many plans to support this game with excellent miniatures and terrain, play aids and future expansions.  The authors appear knowledgeable and enthusiastic.
Playability: 2/5 .  The result of a joust appears to be little more than chance, though the grand melee probably requires more positioning skill.  Rules are poorly written and often contradictory or difficult to comprehend.
Value for money: 2/5 . At £20, this is a very expensive rulebook.  I could accept this if the rules were a bit meatier and the book was a hardback, but as it is I think it's only for the serious collector of tourney rules.
Overall: 2/5 .  I'm very disappointed that this isn't the set of jousting rules.  Perhaps the authors will produce a revised edition sometime soon?