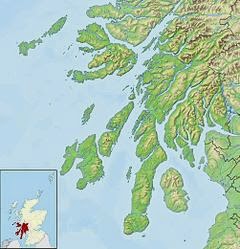 Once again it's the summertime and my family and I have been on our holidays.  This time we decided to go to the Isle of Arran in the Firth of Clyde.  Although this island is quite close to my home (30 miles/50 Km, as the crow flies?) and to the city of Glasgow, it is a very different place.  Culturally and physically it's much closer to the Hebridean islands than it is to the big city or to the rolling farmlands of Ayrshire on the mainland just to the east.  Instead, Arran has rugged hills, woodlands and deer-infested moors.

This geographical distinctiveness, together with its strategic location in the middle of the Firth of Clyde, has made Arran important over many millennia.  As tourists, we spent a lot of time hillwalking (though we did have time to visit the distillery as well :-) ) and everywhere we went there were traces of past generations.  So, in the hopes that some of these will be of interest to my (mostly wargamer) readership, here are a few moments from history.

It's hard to step out of doors in Arran without treading on a hut circle, chambered cairn or standing stone!  Before our visit I didn't know much about the island and it was a big surprise to discover just how important it is as a location for prehistoric monuments.  Actually I suspect that the hut circles are the traces of Iron Age dwellings rather than Neolithic, but all of these were pretty much invisible to an amateur like me anyway, so let's just ignore them.

Here's the remains of one of the chambered cairns; this probably dates from around 4,000BC .  That's over 6,000 years old, or perhaps 1,500 years older than the oldest of the famous Egyptian pyramids at Giza.  I don't know about you, but I find that very impressive!

The stones that remain form the walls of one of the chambers in the tomb.  Originally the whole structure would have been covered with a huge mound of soil.  It's not obvious from the picture, but this is a "Clyde pattern" cairn: it would have had a large courtyard with entrances to a number of chambers that were built into the mound. 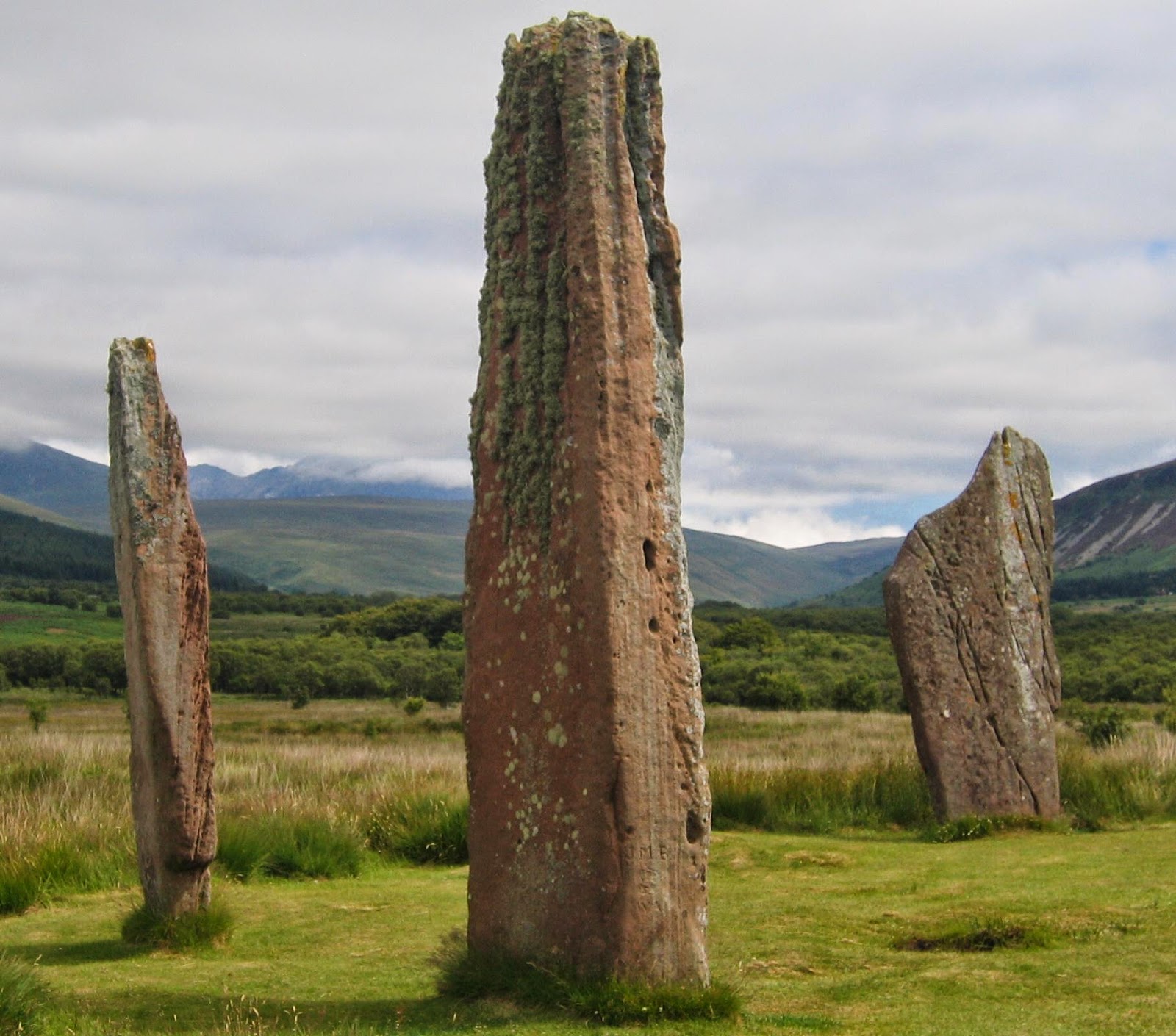 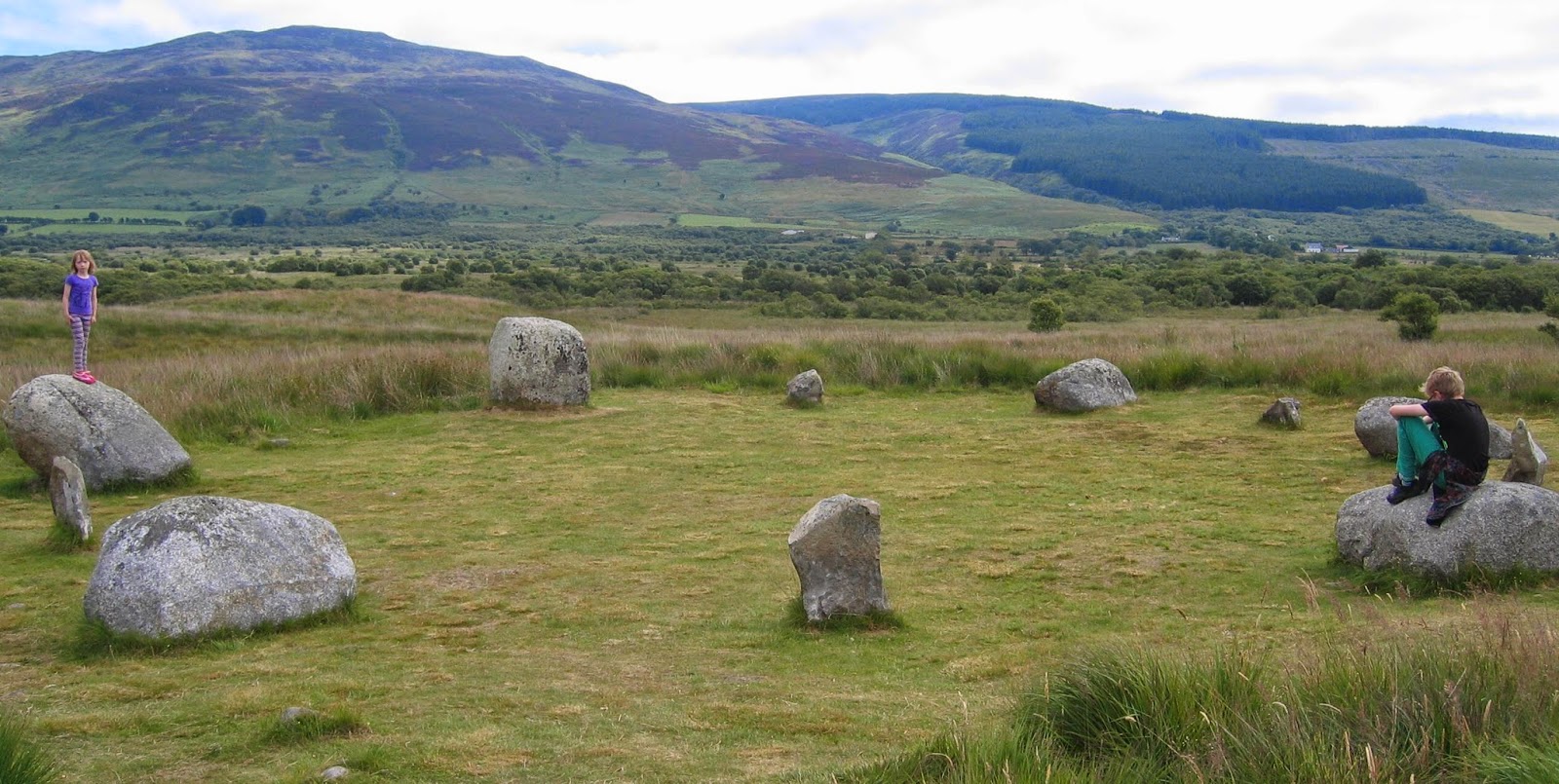 Above are a couple stone circles that can be found on Machrie moor. While they may not be individually as large as Stonehenge, they're part of a group of ancient remains that includes at least 5 circles within a few hundred metres of each other.  And you can get right up to the stones to study or play with them, or just gawp in wonder.  Eat your heart out, Salisbury Plain!

A very rough date for the stone circles would be 2,000BC - so maybe 2,000 years later than the burial cairns.

On the west coast of Arran there are many small caves.  The largest of these is known as "King's Cave", after a (Victorian?) association with Robert the Bruce.  Apparently it was known as "Fingal's Cave" before that.

Inside King's Cave there are a number of carvings from (loosely) around 1,000 years ago.  I saw a line of Irish Ogham writing as well as what looked like early Christian crosses.  I don't know how to read Ogham, but I suspect that it would have read "Máedóc was here" or something like that!

There are a number of Pictish animals in the cave as well; the picture above is of an area where someone had been practising his snakes.

This is Lamlash bay, on the east coast of Arran.  It is particularly associated in my mind with the Vikings.  In 1263, the elderly King Hakon IV of Norway led a fleet to enforce his claim to large parts of western Scotland.  Lamlash was used as a harbour by the Norsemen whilst they stripped Arran of food and supplies, so at that time this harbour would have been full of Viking ships.

Eventually, an autumn gale drove part of the Norwegian fleet onto the shore of the mainland at Largs.  When the Scots army of King Alexander III tried to capture or destroy the stranded ships, this precipitated the Battle of Largs.  I was brought up to believe that this was a very significant Scottish victory that sent the Vikings packing, but it seems that the modern opinion regards it as an inconclusive skirmish.  Instead, it was the death of Hakon later in the year that caused the Norwegians to retreat; his successor wasn't as interested in the Scottish isles and basically sold them to Alexander III in the Treaty of Perth (1266).

Lamlash bay was also used by the Royal Navy during World War II.  Amongst other things, it was the location for the "Lily" experimental floating airfield.  I haven't been able to find out anything much about this, though it sounds interesting!

At the far north-west tip of Arran is the small town of Lochranza.  As well as being home to the island's only whisky distillery, it also has the remains of Lochranza castle.  Like many such ruins, what you see today is the last phase of development (in the late middle ages, so maybe 1500 to 1600 AD).  However there are still traces of the earlier versions, if you know how to interpret the evidence.  I was particularly struck by how many times the main entrance to the castle had been moved and the earlier doorways blocked up.  From memory, the first entrance was on the north side and in an upper level that would have required a (wooden?) stair or ladder.  The current door is on the south side and at ground level.  I think there was also an intermediate entrance in the east wall? 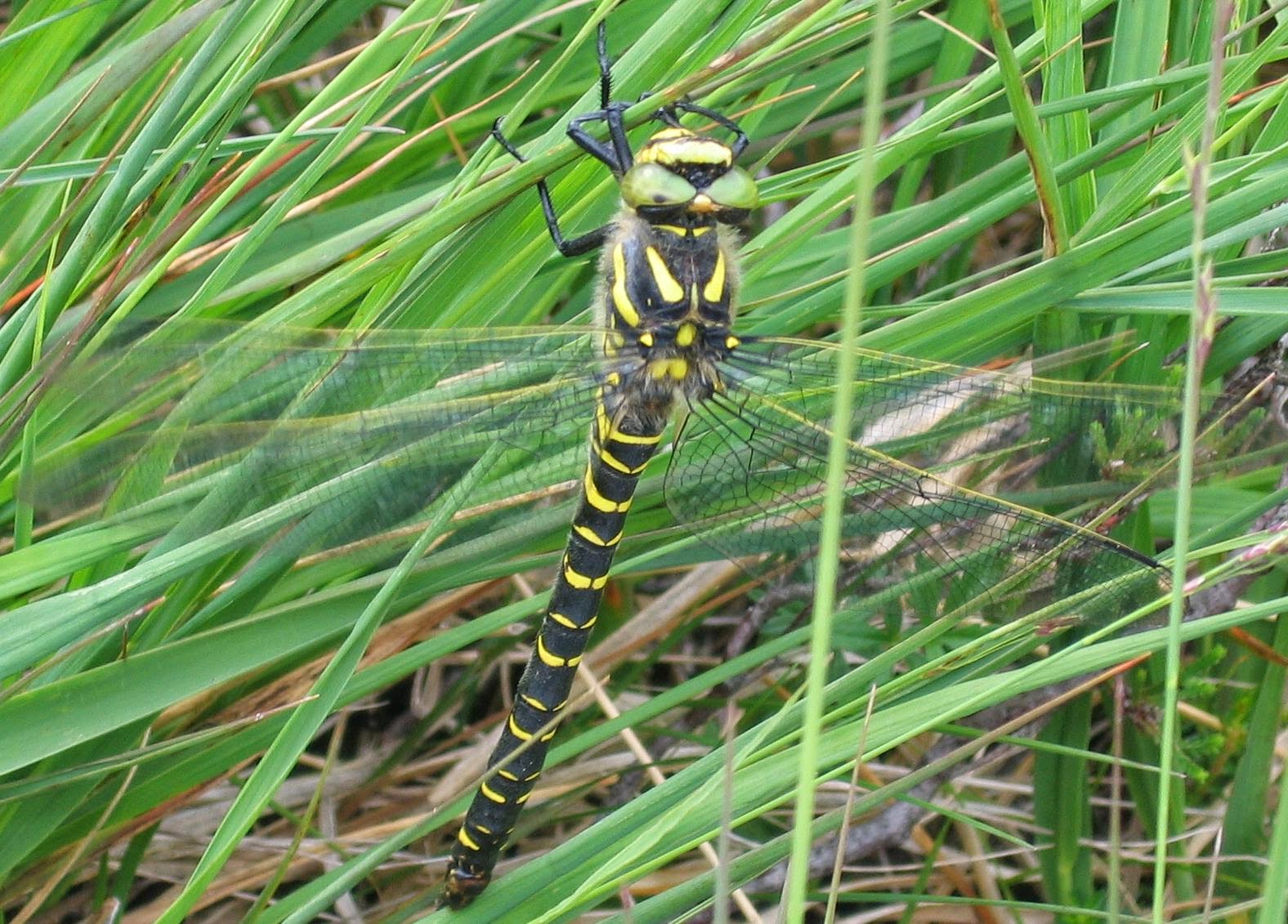 I'm not going to say much about the wildlife we saw on Arran, but this beauty caught my eye.  He's a large dragonfly, perhaps 4" (10cm) long.  One of these flew into the car whilst we were driving - the windows were all down because of the heat - and caused consternation for 5 seconds or so until it found its way out.  Final thought, for pulp or fantasy gaming: imagine if this insect was 4 feet long instead of 4 inches...

I'll be back to more directly-relevant gaming articles soon, but I hope you've enjoyed this interlude as much as I have.
Posted by Colgar6 at 16:04