"We don't need no steekin' badges!"

I've got several small projects that I'm dying to show you, but none of them are quite ready yet.  This means that today's post will be a good opportunity to carry on my work in documenting my collection of figures.  Actually I doubt that I'll ever come close to completing this self-imposed task, but I'll give it a good shot!

It occurs to me that I've described a number of games of The Rules with No Name, but I've never shown any of my Old West figures.  That's an omission which needs to be remedied, so without further ado here are my 28mm Mexican banditos!

Oh, the title of this article?  It's a very famous misquote, possibly the best known line in any Western.  The original encounter between Humphrey Bogart and a group of banditos from which this line derives is, of course, in The Treasure of the Sierra Madre. 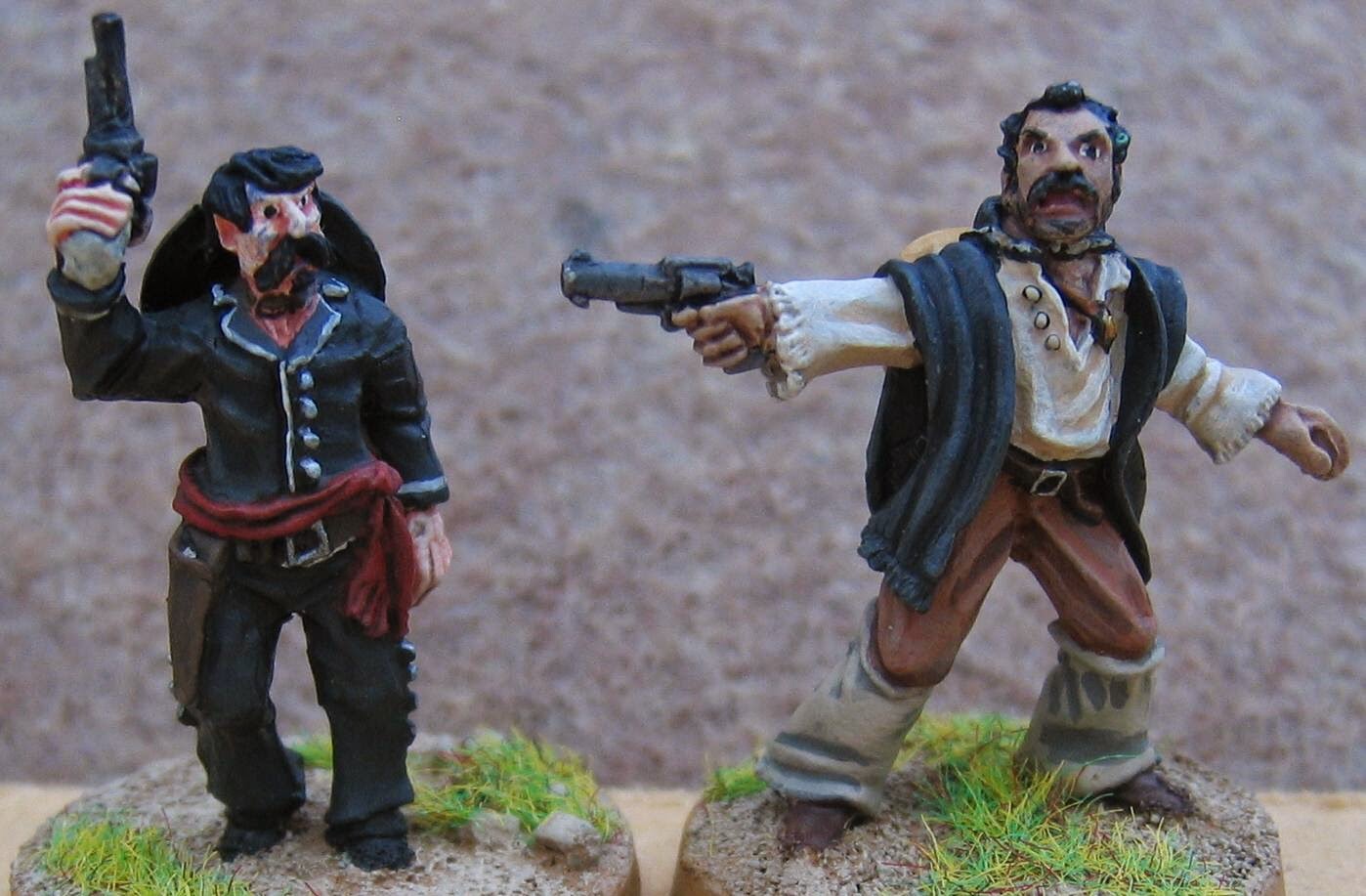 I have 2 models that I use as El Jefe, depending on the role that the Mexicans are to play in a game.  Santos is smartly dressed, well off and honourable.  He's probably the owner of a ranch south of the border and not really much different from his American counterparts.  Santos comes from Knuckleduster Miniatures. 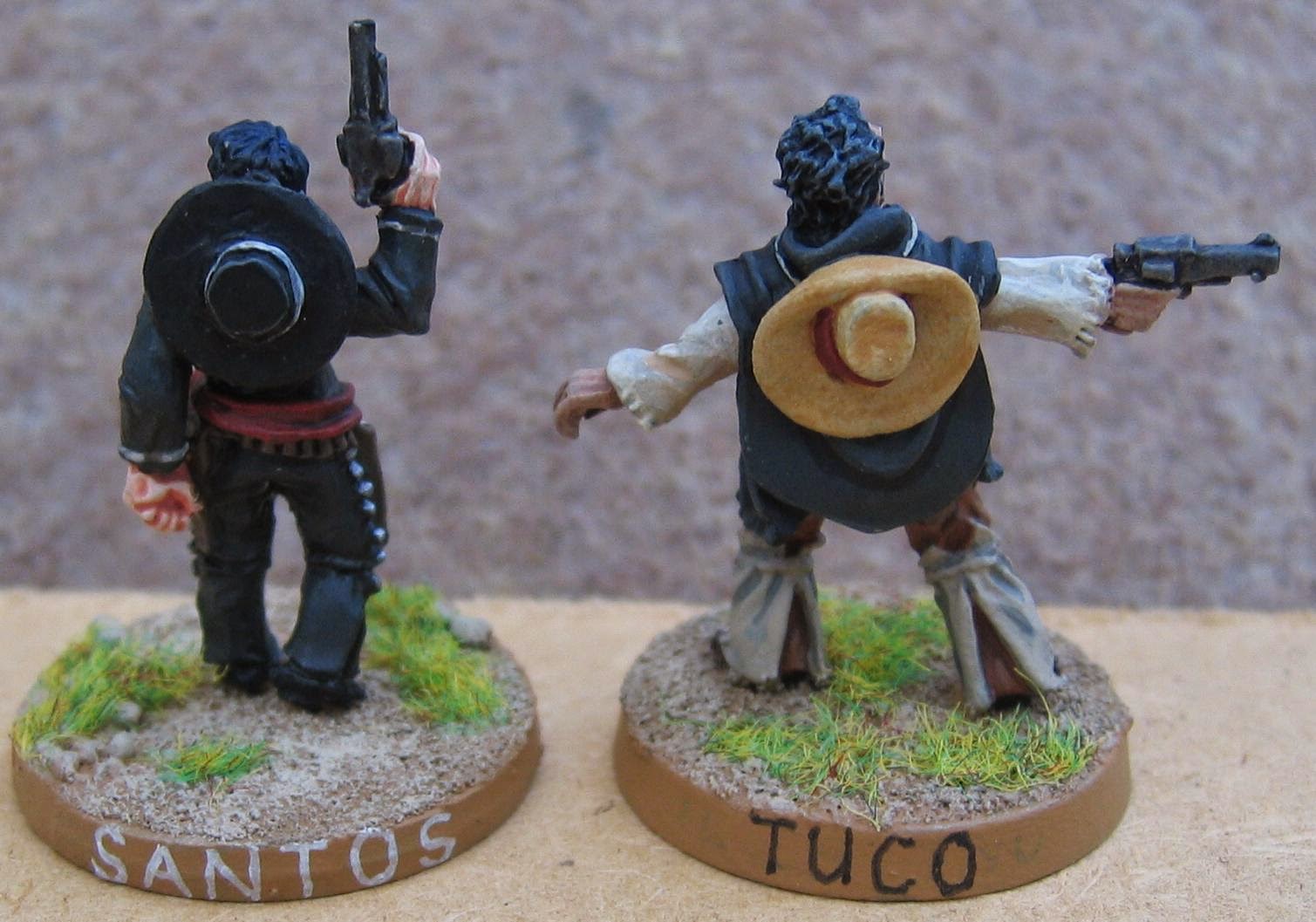 On the other hand, Tuco is just plain evil!  Don't be fooled by his unkempt appearance; this man is a ruthless and sadistic killer.  He'd shoot his own men just as happily as anyone else's if he thought it would help his cause.  Tuco is made by Artizan Designs. 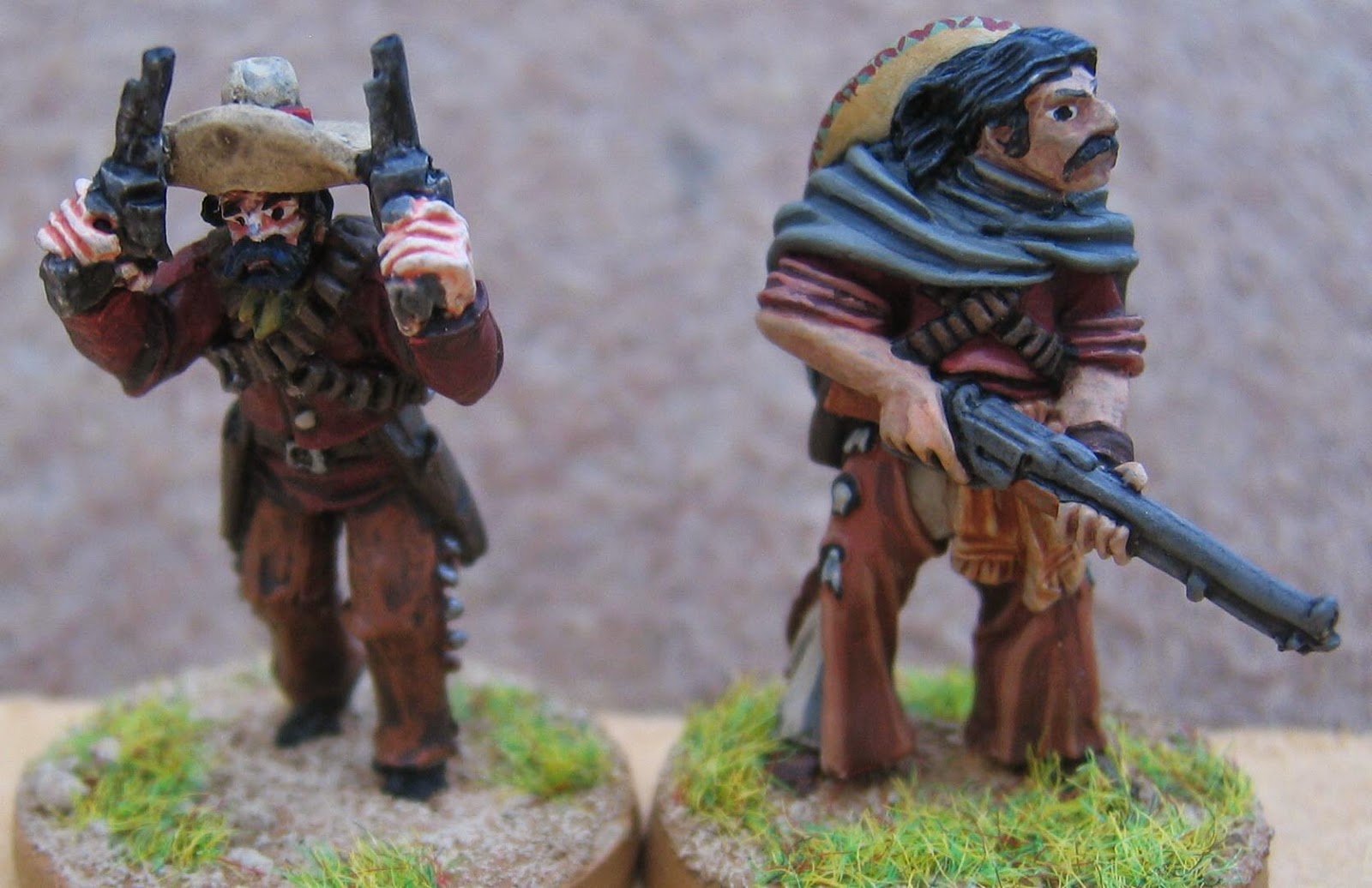 Rafael is known for his habit of firing 2 revolvers at once.  He thinks it makes him look tough, though in reality all he achieves is to make a lot of noise and smoke.  Rafael doesn't have much in the way of brains, but he'll willingly undertake any dirty task that his boss commands.  Put plain and simply, he's a thug!  Rafael is from the same Knuckleduster pack as before. 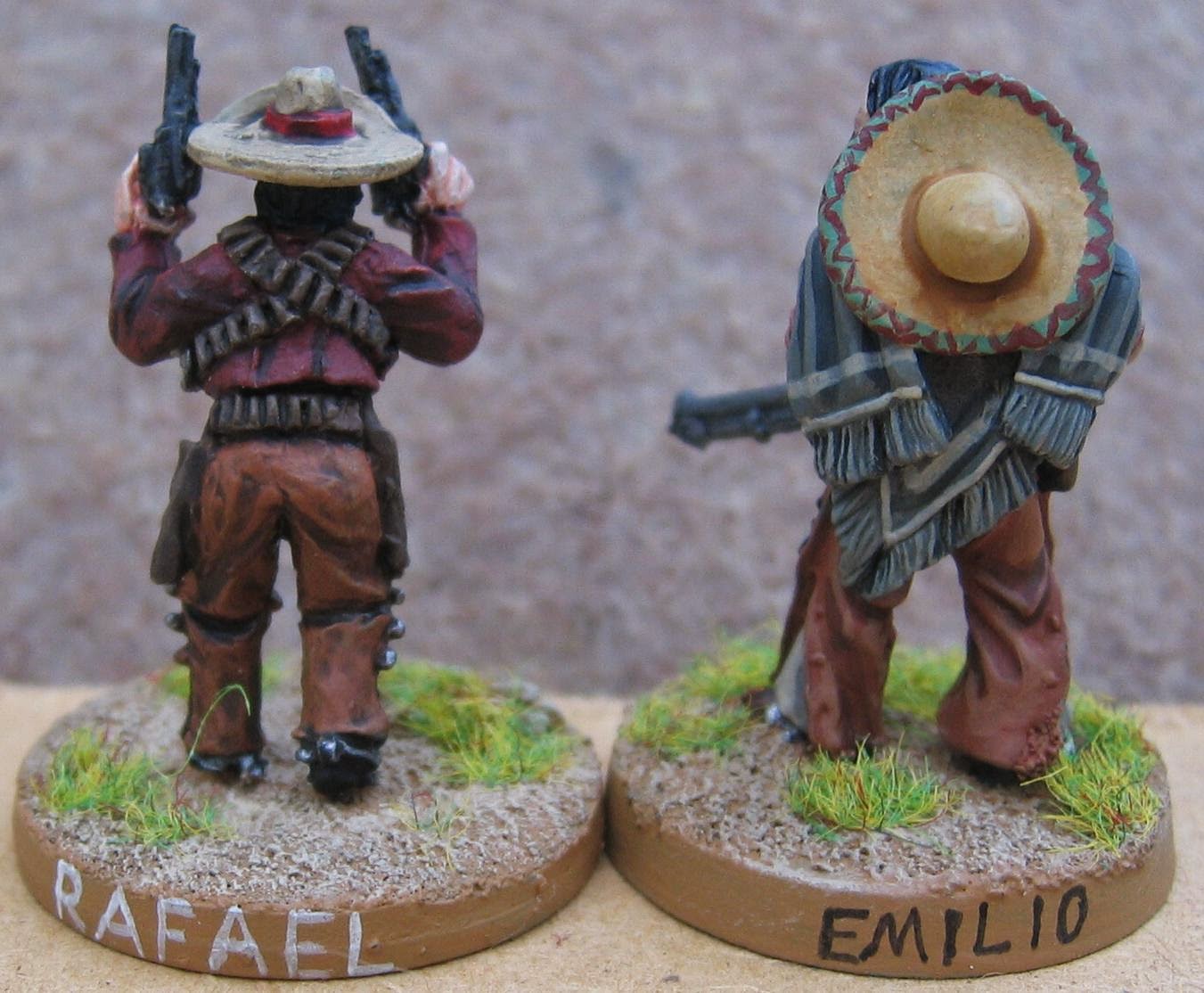 Unlike the other lieutenant, Emilio is quieter and more reflective.  He's intelligent but not particularly strong-willed; he'll try to please his chief by following orders.  Also, Emilio is a very good shot with his rifle.  This model also comes from Artizan, though not from the same pack as Tuco.

The banditos gang has a lot of cannon fodder at the bottom of the pecking order.  These are a mixture of disenchanted peasants, low grade crooks and aged has-beens!

To be honest, in all the games we've played, these characters tend to blend into each other.  I find it difficult to remember one such bandito from another.  The only exception to this is Rico, the drunk.  He's always been crazy and unpredictable; sometimes passing out without firing a shot and sometimes charging into fistfights with hostile shootists.  Never a dull moment, except when he sobers up!

The first 4 of these models are from Knuckleduster, whilst the last 2 are Artizan, again.

I've always liked the banditos.  They may just be used as generic bad guys, but in my mind they're more than that.  Perhaps they're displaced farmers who have resorted to banditry to try to feed their families?  Maybe they're misunderstood revolutionaries fighting for a better world?  Or possibly they're just 2-bit outlaws after all!

Obviously I need to get some more guys for this gang sometime.  The Magnificent Seven wouldn't even get to shoot 2 banditos each, let alone an entire village full!  I'm also lacking any mounted models or casualty figures, though I do have an as-yet-unpainted Mexican taking a siesta under his sombrero!
Posted by Colgar6 at 20:33

Email ThisBlogThis!Share to TwitterShare to FacebookShare to Pinterest
Labels: Army Showcase, Banditos, The Rules with No Name