Yesterday was the date for Carronade 2015, the annual wargames show that is put on by the Falkirk District Wargames Club.  I had never been to Carronade before, believing despite all the evidence that it was a very small, local show which wouldn't really have been worth the travel time.  How wrong I was!

My younger son (A.) had expressed a desire to go with me to Falkirk and I had told him the previous night that he'd need to be up in plenty of time.  As it was, I had to rouse him from his bed, though we still had plenty of time to catch the train from Helensburgh.

We changed from the local train at Glasgow Queen Street station and were fortunate enough to walk straight on to the inter-city just as it was about to leave.  The itinerary I had printed off suggested that we wouldn't make this connection and would have to wait 15 minutes for the next train, so that was a bonus for us!

From Glasgow Queen Street to Falkirk High was only a short journey of 20 minutes or so.  It took us slightly longer than this to walk from the station in Falkirk to the show venue in the local high school.  During our walk, A. talked nonstop about Warhammer 40K.  He and some friends have started playing small games at lunchtime in school once a week and he has visions of collecting and building at least 3 or 4 armies, if I understood correctly!

We arrived at Carronade marginally before the show's official start time, but the entrance was already open and so we didn't have to queue.  It was immediately obvious from the site map that this was quite a big affair - I think there were 5 halls in use.  At least, we visited 5 rooms during the day; if there were more then we missed something!

The very first thing that we stumbled across (and were invited to participate in) was a game of Malifaux.  Sadly, I forgot who was demonstrating this game; my apologies to our very helpful hosts!

So, I took a mad doctor and his entourage, whilst A. commanded a very refined-looking type of juju man and the possessing demons that he had summoned.  All very odd, but although A.'s leader reached the magic hat that was the objective first, I wiped out all of his supports before he could escape with this treasure.  Then my extremely powerful doctor took on the spiritualist one-to-one and slaughtered him.

This was the first time that I'd played Malifaux.  My general impression is that there is a great deal of (very creepy) imagination in the figures and the setting.  If you like that kind of thing then this will be heaven!  However, the rules didn't particularly impress.  Whilst the mechanism for using cards rather than dice (and being able to "cheat" by playing a card from your hand to override a drawn one) was well enough, the combat system and the special rules for each character seemed immensely complex.  Each character card was dense with very small text, so perhaps not really suitable for casual, pick-up games. 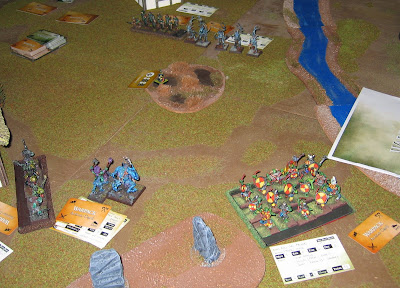 We were treated to a demo game of Warpack, a fantasy mass battle game by Prince of Darkness Games.  The main twist to this seems to be that each unit and each character is assigned a card every turn that details their melee, magic, missile and/or defence value.  No dice are involved; the values on the unit's card are used for the entire turn.

In our game, my Orcs were thoroughly shot to pieces by A.'s superior Wood Elf archery.  My depleted hobgoblin cavalry did manage to wipe out a cavalry unit with a flank attack and to run down an elven hero, but it wasn't nearly enough.

I'm not at all convinced by the diceless approach to games.  What we were left with was a completely predictable combat resolution; once a unit's combat card had been revealed then all enemies knew whether it was worth attacking them that turn or whether they should direct their efforts elsewhere.  That was married to a very traditional command/move sequence, where every unit could be moved at will up to its maximum distance each turn.  Maybe I just didn't "get it", but I don't think I'll be playing this again.

As at a number of other wargames shows, the hot food on offer was basically chips.  Yes, it was possible to put other yellow/brown food in the same dish (pie, burger, baked beans...), but there wasn't much outside of this genre.  To add insult to injury, it was quite expensive.  I keep hoping for better from school kitchens, but I'm continually disappointed.  Why, oh why can't I remember to take my own packed lunch to these events?!

Escape from the Robot Planet 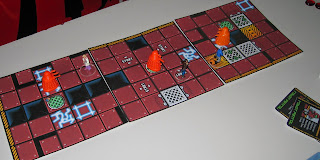 In the afternoon, we started to make some purchases on our rounds of the show.  We visited the Crooked Dice stall, where I talked with Graeme at some length.  More on my purchases later...

Just as we were about to move on, A. looked at a side table with some tiles and a deck of cards and said "Is that a demo game?"  It was and so we were offered a 3-player run through the work-in-progress "Escape from the Robot Planet".

In this game, each player had to run from tile to tile, seeking for the exit that would allow them to escape.  Cards could be played as either assists to the player's character or as hindrances to someone else, so there was a bit of tactical thought needed when choosing which effect from the card to use.  I took great delight in playing a card to swap my hand with Graeme's, just after he had used a card to search through the deck for something he wanted!

Eventually, both A. and Graeme found the exit tile, whilst I was stranded at the other end of the board about as far away as possible.  My card play to prevent Graeme from winning unwittingly left the way open for victory by A. instead, so my boy was pleased.

Overall impression: this was quite a fun little side game.  Obviously it's still under development and the balance of card types might not be quite right.  There seemed to be much backstabbing between the players, whilst the robots were all but bystanders; they didn't play much part in the game.

We had been eyeing up a very popular Kaiju game all day, but it was only at 2:30pm that we managed to participate.  Even then, there was only 1 slot, so A. took control of the Jaeger "Gypsy Danger" and I sat behind to advise.

Initially, 2 of the 3 monsters were submerged; they surfaced together to sandwich Gypsy Danger and one of them immediately tore an arm off the mech.  However, the Russian and Japanese mechs came to our assistance and ganged up on Swordhead, eventually overpowering the beast.  That left the damaged Gypsy Danger facing Leatherback (?) one-on-one.  Both combatants took damage, but once we figured out that we had a chainsword and elbow rockets, we hammered the creature again and again.  By the time the kaiju died, Gypsy Danger was fairly beaten up and had lost power in a leg as well as having massive dents in the torso.  So, another win for our side!

No show report would be complete without the loot picture.  Note that this is just my stuff; A. got some half-price Tau pathfinders for Warhammer 40K and some even more heavily reduced Magic cards. 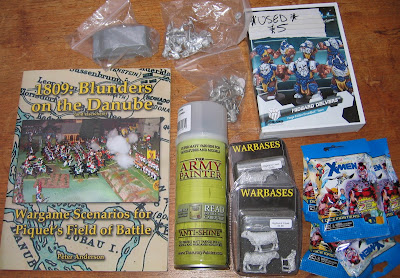 So, what did I buy?  A scenario book for 1809 Austrians vs French, more varnish, a second hand Dreadball team, some 28mm highland cattle, X-men dice, a bunch of 40mm Greek Peltasts (I intend to use them as giants to face my 28mm Argonauts) and a Crooked Dice transit van.  This last will end up as the Mystery Machine, if all goes well.

Put together on the table like this, it doesn't look like much stuff.  It cost enough, though!

Will I go to Carronade again?  You bet I will!  It's simpler for me to get to than any of the other Scottish shows and it's easily big & varied enough to satisfy my needs for a day out.  My only regret is that we didn't have as much time as I might have liked to look at all the other games which were being displayed!
Posted by Colgar6 at 11:34