I managed to play a couple of games today with my sons, whilst the visiting relatives were out shopping in the big city.  To tease: I'll have reports of a small All Things Zombie game and a larger SAGA battle some time soon - but not today!  Instead, now is the time for description of another vac-formed terrain piece from Amera.  So, what have we got here? 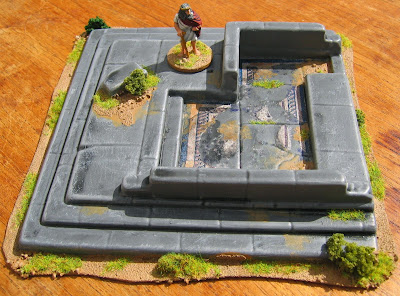 F207 Terrace Ruins is the smallest of the various Amera terrain pieces that I've bought so far; excluding the rim at the base it measures just about 15cm (6") square.  It comprises a series of wide, shallow steps leading into a building with low walls and a sunken floor.  The building has a step up to a small back door, or maybe it's the start of a further staircase, or a fallen block across a passageway... 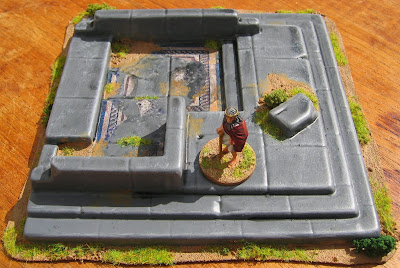 This was a very simple piece to finish.  I've followed my normal method for "ruins", though it probably takes longer to describe than it does to paint:

I thought that the terrace looked a little bland even after this, so I added one last touch.  I found some pictures of Roman mosaic floors from the internet and printed one of them out (at a size of 3" x 2", from memory).  I then tore this into fragments and used some of them to decorate the sunken part of the building.  Obviously this was a high-status building before it was ruined! 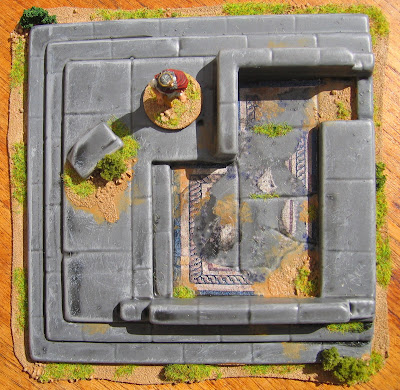 The Terrace Ruins is a strange piece of terrain.  On the face of it, it doesn't look to me to be particularly ruined.  Apart from a single block of masonry, the walls and floor slabs seem as if they might have been designed to be as they are now, though for what purpose?  I suppose that there might be other blocks missing; they might have been carted away by locals to use as an easy supply of building materials rather than left lying about.  We'll never know...

Even if the walls were higher before being ruined, I still cannot quite work out what the sunken "room" might have been.  It seems odd to climb the terrace steps only to then descend into the building.  I don't quite see the point of this.  Mind you, the lowered area would make a brilliant water feature if filled with some suitable clear compound (see my earlier ruined bathhouse for a similar concept).  If converted in this way, the steps down into the terrace building would make a bit more sense, I think.  Perhaps this was a reservoir or the rather fancy head of a spring or well?

Or maybe I'm over-thinking this; at just £3 this is cheap terrain and I should just accept it as such!  I'll most certainly use it for my Greek Myth games, as well as any other genres which require some ruins of antiquity for the opponents to fight across.  Maybe some pulp archaeologist could lead an expedition to figure out what was the purpose of this building?
Posted by Colgar6 at 22:17