Cerberus, the hound of hell!

In Greek and Roman myth, Cerberus (pronounced Kerberos) was the 3-headed hound who guarded the entrance to Hades or Hell.  His job was to prevent the dead from escaping and the living from entering.  The hound seems to have accomplished the former perfectly, but at least some of the greatest Greek heroes did manage to enter the underworld whilst alive and then leave again.  For example, Orpheus managed to pass Cerberus in both directions - possibly by soothing the beast with his music - and Heracles actually captured the beast as his 12th labour!

Cerberus was sibling to a number of other monsters including the Lernaean Hydra and the Chimera.  So I suppose you could say that he (she?) came from a somewhat dysfunctional family.  I don't suppose that anyone wanted them as neighbours! 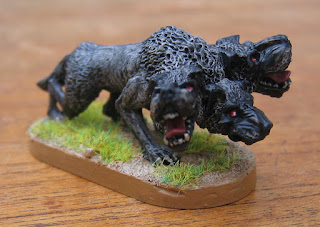 There are several manufacturers who make 28mm models of 3-headed dogs.  I compared all of the ones that I discovered; in the end I chose to buy the Foundry figure.  This model comes in 3 parts: the body & central head and the 2 other heads.  Interestingly the outer heads are identical parts, though I wouldn't have realised this had I not built the piece.  They did need a little filler to mate them seamlessly to the body, but nothing too bad. 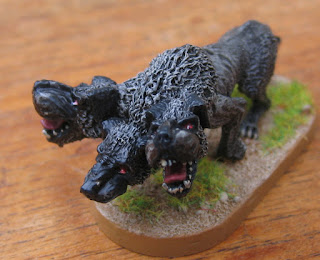 I was aiming for a colouring similar to a brindled mastiff.  This should have some quite visible, if poorly defined, stripes on the body.  However the wash I used was a bit darker than intended and the stripes aren't really visible.  Still, the black elements (ears, muzzle and eye sockets) help to give the hound a sinister appearance nevertheless. 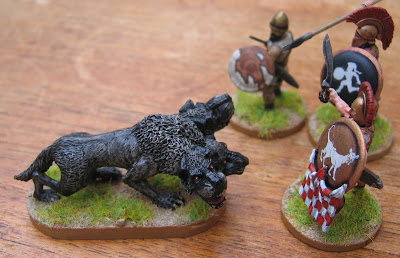 Here's a size comparison with some humans.  In this case, they are 2 Wargames Factory Greeks and a Wargames Factory Numidian, all recently completed and added to my collection.  Note that the WF Greeks are quite tall and chunky figures; the Numidian is more average for a 28mm person.  Even so, the hound is clearly quite a monster: he's as big as a horse (if not quite so tall)!

Cerberus is a very useful monster who ought by rights to strike fear into the hearts of all bar the stoutest of heroes.  In a game it wouldn't be unreasonable to give him any number of attributes, depending on the scenario, such as fiery breath (maybe) or regeneration (he never seemed to die - or perhaps he's already undead?).

However, I think that all the ancient heroes were taking the wrong approach.  The easy and obvious way to defeat a creature like this is to show him 2 squirrels, throw them in opposite directions and just watch the hound tear itself apart in an attempt to chase both of the squirrels at once!
Posted by Colgar6 at 20:36