It's been just over 2 weeks since my last post, I think.  I haven't been away, or ill, or had computer troubles.  In truth, I just haven't felt like posting anything.  This came as a complete surprise to me, as in the past I've tried to post faithfully, twice a week - and have mostly managed that goal for the last 3 years or so.  Indeed, it's quite an effort even to motivate myself to write this much!  I'm not at all sure what's going on, but I'm really hoping that it'll pass soon and that I can get back into a more regular flow.

The strange thing about my sudden malaise is that I did have plans for an article (i.e. this one)!  Just over 2 weeks I ordered some miniatures from a new company: the curiously-named Bad Squiddo Games.  For those who haven't come across Bad Squiddo yet, it's an offshoot of The Dice Bag Lady's enterprise.

As I understand it, Annie (who is the Dice Bag Lady) started by selling bags and pouches suitable for dice.  More recently, she's set up an online store to sell "believable female miniatures" - so no inappropriate clothing or unlikely anatomy here!  Most of her stock of female figures has been picked carefully from the existing ranges of well-known manufacturers, but there are a few models which are sold only by her, under the "Bad Squiddo" label.  At least, I think that's the way it works.

As soon as I saw the first Bad Squiddo miniatures, I decided that I wanted some!  At the time, there were 3 armed, Dark Age women in the range, though since then a 4th had been added.  Also I think you can now buy a female orc, though I'm not really interested in this figure myself. 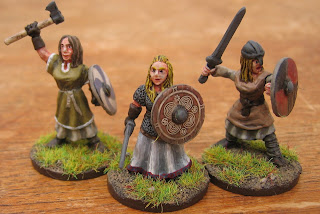 I ordered the 3 models on (I think) a Friday and very promptly received an e-mail from Annie apologising that she would be busy over the weekend and couldn't post the figures until Monday.  Well, that was just fine, since I wasn't in any great hurry - and it's nice to be kept informed. 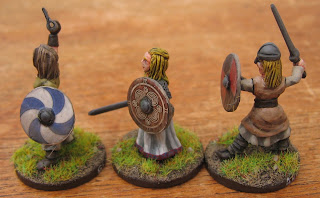 In my mind's eye, these are probably women who have picked up whatever they could find to help defend their homes from raiders.  It's possible that they have joined a raid themselves, though - either planning this from the outset or maybe being more adventurous camp followers who have chosen to join in on the spur of the moment! 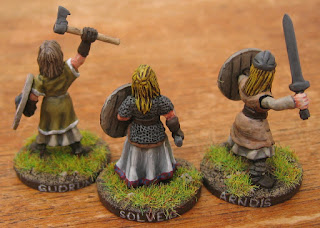 Solveig clearly comes from the richest family of the three women.  She's wearing chainmail and has the most brightly-coloured and decorated (& therefore most expensive) clothing.  Perhaps the other 2 women are poorer relations or neighbours?  Or even her old nurse and a maid? 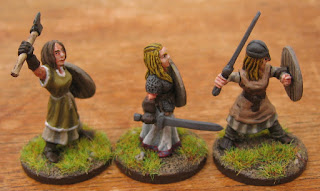 I've often said to friends that the best way to make progress in the hobby (or indeed in most hobbies) is to use as many small slots of time as possible.  There are often periods during the day when I'm waiting for something and these periods can be usefully employed in reading, model-making or other such activities.  This might include 10 or 15 minutes after breakfast and before leaving for work, or a similar period after dinner whilst the kids are doing the washing up (well, I can dream about that latter, can't I?).  Indeed, I often find many such "gaps" during a typical day and while they can't all be used productively, some usually can.

I decided before I had even received the models that I would keep a record of when I made progress on the 3 shield maidens.  So here is the record of how it happened; I hope this is at least somewhat useful or interesting to someone:

This has to come in 2 parts, I think.

Firstly, the models themselves.  They're resin casts - I'm always slightly suspicious of resin, but that's probably just because I'm so used to metal figures.  I needn't have had any worries, though, as the casting and fit of these miniatures was very good.  Not quite top marks: there was a little flash (easily trimmed) and a few really tiny air bubbles, though nothing that you'd notice once the model was painted.  For what it's worth, I didn't add any filler or other remedial work to my figures.

Each miniature came in 3 parts: the weapon (and the hand holding it), the body and the shield.  These all fitted together very well, though I did pin the weapon hands to the arms.  I think this is probably over-cautious on my part, mind.

The sculpting of all 3 models is good, I think.  Gudrun (on the left, with the axe) has a rather long face, but not outside the normal range of possible humans.  Solveig (in the middle) is definitely my favourite; she looks like a noble's daughter or wife.  There's something about the face of Arndis (on the right, with the helmet) that's a little awkward, though.  I can't quite figure out if it's a technical casting issue, especially around the nose and eyes, or if the sculptor just didn't get it quite right.  Anyway this is really nit-picking: I'm very happy with all 3 models.

Hallelujah!  At last someone has stood up to be counted, to push back against the worst excesses of misogyny in the hobby.  Now don't get me wrong: I'm a man and I do like women's bodies.  But there is a time and a place for everything.  There are very few places in gaming where gratuitous nakedness (partial or otherwise) is appropriate and none at all for the excessively "well-endowed" (and highly unrealistic) female form.  Yes, Raging Heroes: I'm looking at you (and others)!

Will this make any difference to the seemingly endless stream of miniatures of fantasy women (and I don't mean swords and sorcery in this context)?  Probably not.  But I've cast my vote, for what it's worth...

Of course, my Hordes of the Things "Barbarian" army will still be an equal opportunity zone, where both sexes are expected to dress in just their leather underwear, wield impossibly large weapons and have exaggerated, err, muscles!