Any long-term followers of this blog may remember that I like to take a card modelling kit with me when I go on my summer holidays.  It's light and self-contained, requires only a few tools and no paints at all - and I can afford to bin the results if anything goes wrong!

This year, I added several sheets printed out from Dave's "Cut and Fold" Card Creations site.  These are all free-to-download kits and there are a great many interesting subjects; I'd encourage anyone with even a passing interest in paper modelling to browse this site!  Anyway, I chose to build several of the iconic Spectrum vehicles from the Captain Scarlet TV show, to go along with my 28mm figures from Crooked Dice. 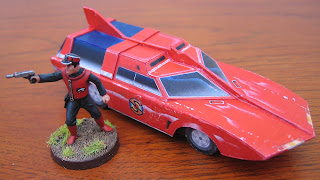 The Spectrum Patrol Car is a basic light transport automobile.  It's fast (insanely so, compared to the roads and motorways that we know now!) and can carry 4 people.  A simple sports saloon from the future, as envisaged in the 1960s! 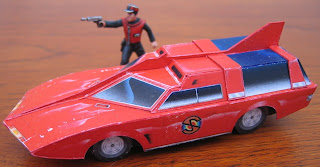 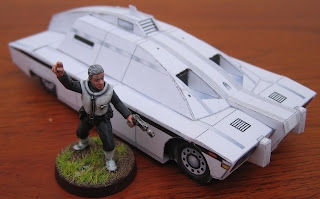 In the Captain Scarlet show, the Spectrum organisation occasionally calls on the services of a Maximum Security Vehicle.  These are typically used as ultra-safe VIP transports; an MSV is supposedly proof against most weapons (up to and including a small nuclear bomb!)  Again, the vehicle can carry 4 people and travel at up to 200mph. 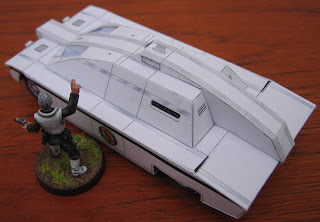 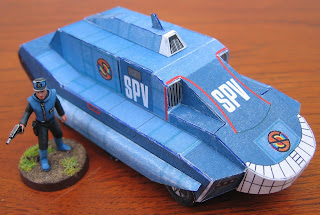 Every schoolboy's favourite was the Spectrum Pursuit Vehicle!  These large armoured cars were stored in hideouts all over the world for use whenever a Spectrum agent required; they could be magicked out of a disused mine entrance, an old barn or similar location on demand.

The SPV had 10 wheels, alternating between large and small along each side.  It also had an auxiliary track unit at the read which could be deployed on rough ground.  It was armed, armoured - and the crew faced backwards and drove it via a TV screen.  It's a SciFi geek dream! 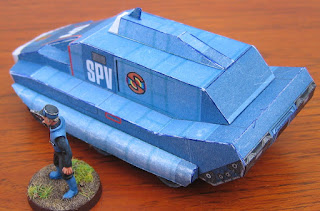 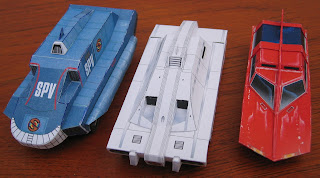 It is possible to buy plastic or metal versions of all of these vehicles; there have been a number of versions over the years.  However, you are then limited to the sizes produced by the manufacturers and I suspect that the collector's market has pushed the prices way beyond all but the most dedicated wargamers.

Card models aren't to everyone's taste, but if you have the time and the ability then you can build as many of these excellent vehicles as you like, to any reasonable scale, for very little cost.  If only Dave produced some Spectrum aircraft as well!

Now please excuse me: I have to go and finish building a 6-wheeled pink Rolls Royce...