For about the last 2 months, my hobby workbench has been completely unusable.  The problem has been building up over a long time, but has now grown well past the point where I can paint anything.  It's depressing, but there is no solution for this other than to spend the effort to tidy up.  So, after 2 months without any model-making, I bit the bullet and started a deep clean of the desk and its surroundings.

I'll not bore you with all the details of my 3-week long cleanup (3 weeks because I didn't have much time to spend on any one day, not because the task itself was so vast).  However, here are the main points:

So, this was something of a shocker.  For the last few years, I've been trying to live by a self-imposed rule: "if you start it then you must finish it".  In other words, no model that has been assembled or undercoated may be put away until it is completed.  It sounds fine in theory... 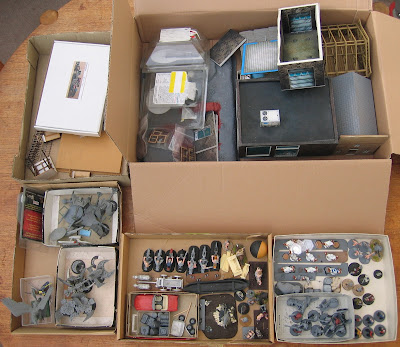 In the picture above are all the part-finished models that I found on or near my desk.  By gathering them all in one place, I realised just how much this collection had grown out of control.  It's also painfully obvious how much space is taken by the part-made terrain pieces.  In comparison, the set of figures is not too big at all!

So, I really need to stop beating around the bush and just go and finish some of these projects. 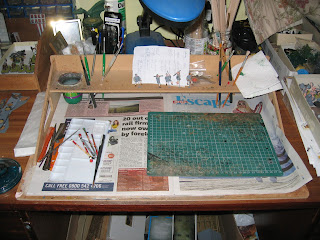 Finally, after being out of action for the entire summer, my painting desk is ready to be used again  I'm beginning to feel quite enthusiastic about this!

So, I started to paint a few of the models that were closest to completion, with a view to finishing off all the easiest ones first.  About 1 hour into this task, my desk lamp started to flicker badly; it was as if I was at a disco.  Under these circumstances, I had to stop painting immediately.

One of my model-making lamp's fluorescent tubes (it has 2) had gone bad and would have to be replaced.  Of course, I didn't have a spare and none of the local shops carry such an item.  I'll need to try further afield, perhaps on my commute home from work on Monday.  As a backup plan, I've ordered a spare tube from eBay, though that could take a while to arrive.  So, no painting for at least a day or two more...
Posted by Colgar6 at 09:45