So, I'm still trying to clean up my desk to make it usable.  It's been about 2 months now since I've done any painting; the workspace has been just too cluttered (and the piles of assorted stuff were just too precarious!)  I'm making inroads into the mess, but oh, it's a slow and weary business. 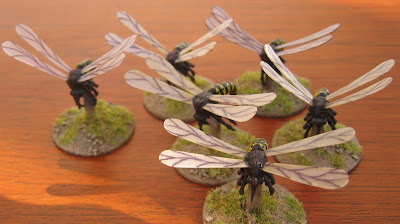 As I've been tidying up, I've uncovered some of my models that were in deep storage.  It's not that I've forgotten that these miniatures exist, but rather than I wasn't sure where they were; they're not figures which I use very often.  Anyway, since I've brought them to light in order to repackage them, I thought that you might be interested to see them.

This is a swarm of 6 Waspquitos.  They're obviously a cross between a mosquito and a wasp and as such they presumably have the worst characteristics of both species.  I imagine that they'll make a highly irritating, high-pitched whining, buzzing sound as they approach.  Then they'll suck all the blood from you whilst threatening to sting if you try to stop them.  They might also transmit malaria or some other interesting tropical disease to your now withered husk.  Oh, they'll probably then get stuck in the jam on your sandwich... 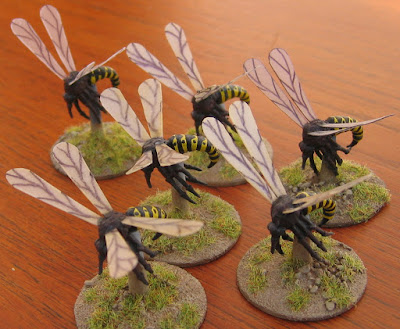 The waspquitos are from Heresy Miniatures, though I don't think they appear in the current catalogue.  I bought mine many years ago, intending to use them initially in a Doctor Who scenario ("The Green Death") and later on in any other games where a swarm of giant, mutant flying pests would make sense (?!).

The miniatures themselves are multi-part, metal models.  From memory, they came as a body, 2 sets of legs and 4 wings.  I felt that the metal wings were too thick and heavy; they didn't look good and would have been difficult to fasten securely to the bodies.  I replaced them with some thin, clear plastic sheet that was cut to the same shape. 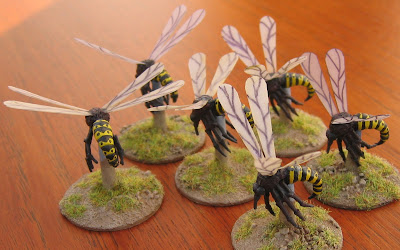 The colouring of these critters is straightforward and was derived from examining photos of real life mosquitos and wasps.  The torsos, heads and legs are a very dark reddish-brown (not black), whilst the tails are black and yellow.  Rather than just paint simple bands of colour on the tails, I've tried to follow the pattern from a real species of wasp; this looks much more effective to me.

The wings had simple veins draw on on them with a fine black pen.  They've become somewhat frosted after the models were varnished, but I think this improves them, if anything.

These are (to date) the only flying models where I have painted the upright support rather than leaving it transparent.  The lower half of each support is in the same colour as the dirt, whilst the upper half is a sky blue.  I'm not sure how effective this is, though the supports are relatively well hidden by the bugs' legs anyway.

These models would make an excellent opponent for an adventuring party in a post-apocalyptic, mutated world.  They'd also fit right in to a fantasy setting such as Dungeons and Dragons and I could see them being part of a Victorian "Lost World" or Tarzan game.  I just need to get on and do it, right?
Posted by Colgar6 at 14:17