Since I started on my Frostgrave adventure, I've built plenty of wizards and quite a few undead monsters, with some soldiers and more critters to come.  However, the game is heavily dependent on terrain as well, so I thought I'd better plan for that too.

Having ransacked my spares boxes, I came up with this: 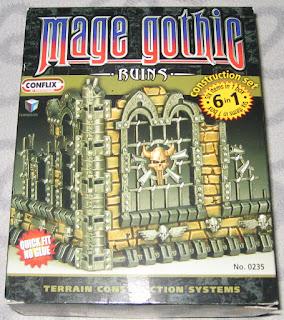 It's a relatively cheap kit that I bought long ago, though I'd never built it because I'm not a great fan of the "techno gothic" look.  It never occurred to me that these ruins could be built in any other way - but they can!

OK, so I had a kit, but what could I do with it?  The box came with 6 identical sprues, each containing 1 long and 1 short wall, as well as 1 tall and 1 short cylindrical joining piece.

Now I really didn't want to spend a lot of effort on this project, so I cut the parts from the sprue (quite crudely, by my standards) and glued them together.  This took only part of 1 evening, so not a great deal of effort at all.  In the end, my 12 wall pieces made 3 "L" shapes, 1 "T" and 1 "Z" shape. 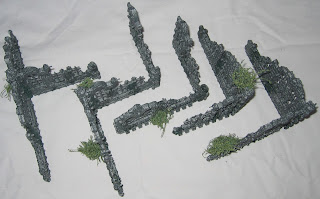 To paint these, I wanted to keep it easy.  I sprayed the built models just once, but with a "stone-textured" paint that I bought from my nearest D.I.Y store.  As well as adding some black and white flecks to the overall grey of the walls, this had the added effect of covering up or softening much of the "techno" detail.  It's not something that I would wish for in many models (indeed, it would be something of a disaster for most!), but in this case the effect was just what I had hoped! 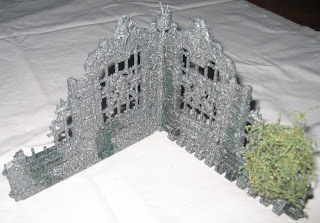 My only concession to extra painting was to apply a thin, dark green colour vertically to some areas, to simulate water stains.

The walls still looked a little bare, so I added some vegetation growing out of various nooks and crannies in the ruin.  This was made from rubberised horsehair, covered with glue and then flock (there's slightly more to it than that; I'm keeping it simple for this article).  However, it didn't require much work at all. 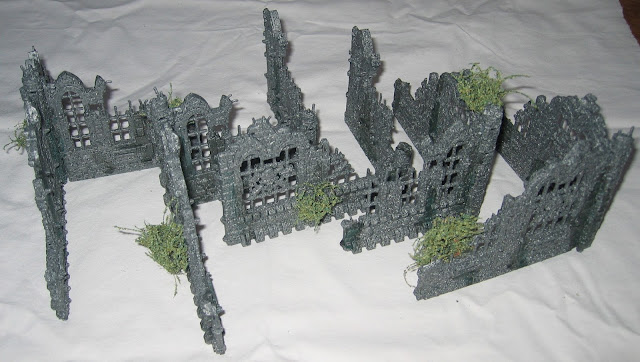 So there we are: another old kit saved from an eternity of pointlessness by being turned into a model that I hope will be very useful.  There are enough parts here to build quite a substantial ruined building, or possibly 2 smaller ones.

I did consider adding full or partial bases to these pieces and I also thought of adding snow over the highest points.  In the end I avoided both these ideas.  Firstly, it would have added extra time and effort to what was supposed to be a really simple, cheap build and secondly, snow or a particular colour of dirt would reduce the versatility.  After all, as it stands I could use these ruins for games in other settings too: grassy plains, scorched wildernesses, overgrown jungles...
Posted by Colgar6 at 19:57