Last time, I described how I had scratch-built some magic portals.  These are needed for the Frostgrave scenario "The Keep".  Just before New Year, we had a chance to play this game with 4 players.  So, did the portals make a difference?  Read on to find out...


So, we had 2 newcomers in this game (SteveH and his son, AH); I was scraping the barrel a bit to fill out their warbands, hence the various shapes and styles of the figure bases. 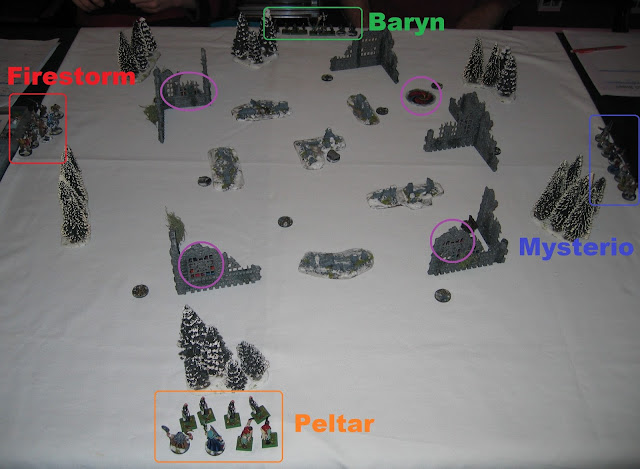 The heavily-ruined keep contains 4 portals.  These are all that remain of the building's magical transport system, but they have degraded with age and lack of maintenance.  If anyone stands on a portal then they'll be sent to one of the 4 portals at random.  A wizard who does this (once) will earn a modest number of experience points. 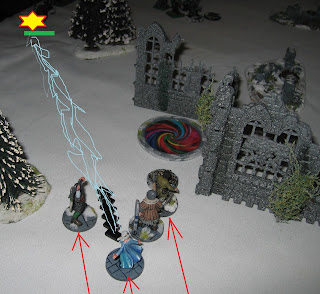 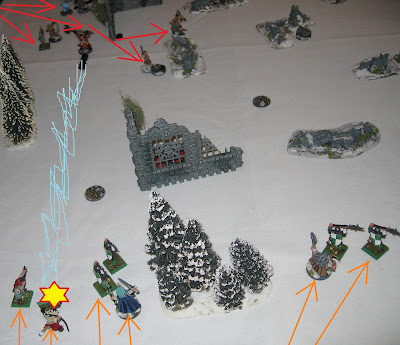 The game started predictably (if somewhat boringly) enough, with Firestorm's crew advancing and throwing bolts of magical energy at everything they could see.  Initially this was very successful, with both Ellie (the apprentice) and Firestorm himself scoring long-range kills on enemy soldiers. 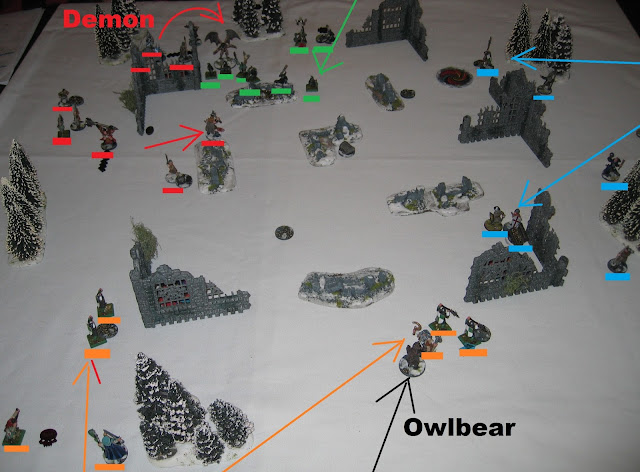 Soon, all squads were advancing rapidly and trying to collect the treasures that were near them and contest those which were slightly further off.  A couple of notable incidents were: 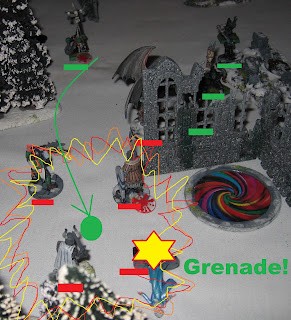 Things weren't all going Firestorm's way, though.  One of the goblin spellcasters (I forget whether it was the wizard or the apprentice) threw a handy grenade spell over the ruins into his apprentice's squad.  Most of the soldiers were saved by their armour, but Ellie, the apprentice, was knocked out. 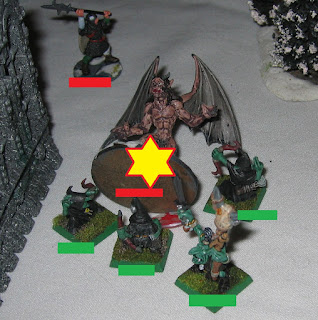 Not only that, but the goblin archers recovered from their surprise over having a demon attack them from behind.  With a shout of "Get it, lads!", they all piled into the monster and pulled it down, though not before taking some wounds in the process. 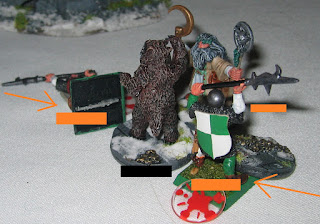 Meanwhile, some of Peltar's halberdiers rushed in to help their beleaguered apprentice.  However, despite wounding the owlbear grievously, the enraged creature proceeded to chew through the humans after another.  This probably wan't helped by one of Mysterio's archers firing multiple arrows into the melee on the basis that anything he hit here was good! Peltar, fed up with having his soldiers smoked by Firestorm's bolts, cast a Wall of Fog between the 2 parties to block line of sight.  As he did this, a new threat appeared behind Firestorm's party: a pair of ancient zombie warriors appeared close to the larger squad.

Those of Firestorm's second squad who had survived the Grenade spell now attacked Baryn's goblins.  The fighting here was intense and bloody as the goblins fought tooth and nail, but they were steadily cut down, apart from one desperate goblin who fought 3 humans to a standstill all on his own.

On all sides, some stout soldiers were dragging away chests and sacks of treasure, just to be on the safe side. 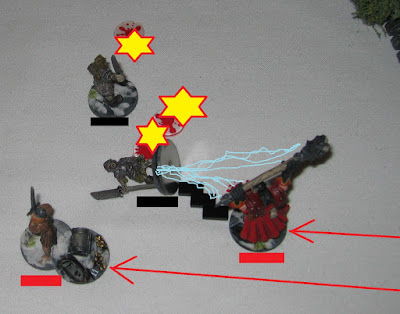 Incredibly, the shambling, fragile zombies laid out 3 of Firestorm's best soldiers before the wizard himself returned and incinerated one with mystical energy.  However, the elementalist was now badly hurt himself, reduced to 1 hit by a combination of miscasts, cutting himself to power spells and the odd arrow. 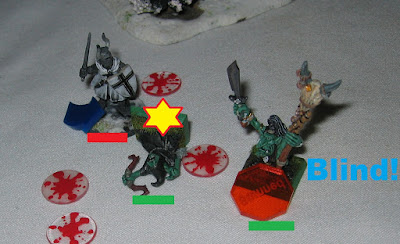 In the north, the last of Firestorm's warriors fought the last of the goblin soldiers.  In the interests of fair play (!), Mysterio cast a Blinding Light on the nearby goblin apprentice; all he could do was stagger about, disoriented, until the knight finished him off too. 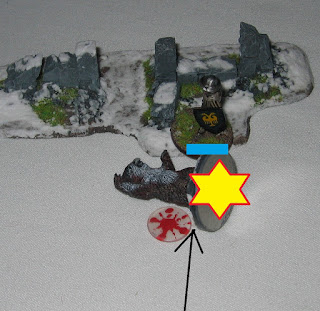 After finishing off Peltar's apprentice and his bodyguards, the badly hurt owlbear staggered on.  It encountered one of Mysterio's soldiers in the rubble and charged at him angrily.  The fresh soldier hit the poor creature a hefty blow and killed it before it had a chance to strike him. 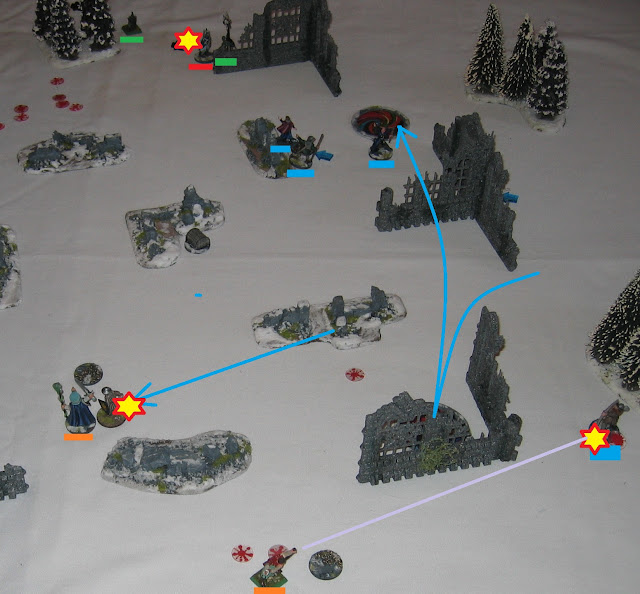 Eventually, one of the wizards stepped experimentally onto one of the magic portals.  I was beginning to think that this would never happen! 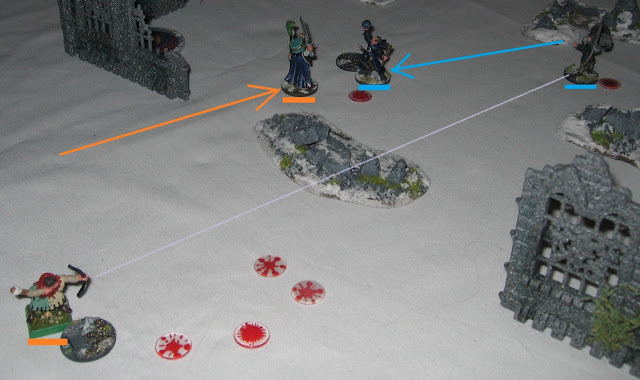 Finally, all that was left on the table was Peltar, Mysterio and a couple of their bowmen; everyone else had fled, had left the table carrying treasure or was dead.

The 2 wizards advanced on each other, whilst their 2 archers exchanged futile arrows.  Their leaders flung magic at each other: Peltar's Steal Health struck home, but Mysterio's Blinding Light was resisted. 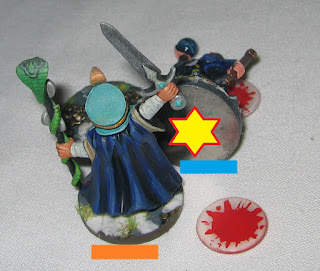 Despite his initial success, Peltar was afraid that the more experienced Mysterio would soon conjure up some more potent spell.  Rather than risk this, he strode forwards and smote the soothsayer an almighty blow with his staff.  Mysterio fell like a log and lay on the ground, unmoving.

At this, Mysterio's last archer turned and fled.  He was too smart to think that he could win when outnumbered 2 to 1!

For the most part, casualties survived and recovered; there were relatively few dead.

This was an exciting game with some interesting use of magic.  Having said that, the previously-established wizards were notable for trying pretty much the same tactics as before.

I was disappointed at the various players' timidity in trying out the magic portals, but maybe this wasn't surprising.  After all, with 3 hostile bands, the odds of landing in the middle of a group of enemies was quite high!

Wandering monsters were infrequent, but performed well beyond expectations!  The owlbear (using the stats for a regular bear) and the pair of zombies between them accounted for 5 soldiers and an apprentice.  More to the point, they completely changed the outlook for the bands that they attacked.

Finally, beware goblins in numbers.  They may look weak and timid, but if they can swarm you then they'll tear you apart!
Posted by Colgar6 at 20:53