In my last piece, I mentioned that my friend Steve and his son had visited us last Saturday.  I've already described our Frostgrave game, but we also played a Pulp Alley scenario.  I'm not going to describe that yet (you'll just have to wait a while), but it involved Tarzan, Nazis, a deserted archaeologists' camp in the jungle and some pretty hostile wildlife!

This was our second ever game of Pulp Alley and after the first game (here), I felt that using bland, unnamed plastic chits for the objectives wasn't really getting properly into the spirit of things.  In the intervening weeks, I made some "proper" objective markers.  These are described below. 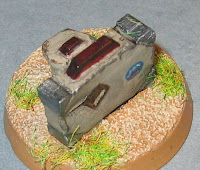 So, the scenario will be set at a deserted campsite.  Whose luggage is it?  Was he or she planning a secretive departure, unknown to their colleagues?  If so then what caused them to leave the luggage behind?  Is it full of banknotes, treasure maps or other incriminating evidence - or just dirty socks and other laundry? 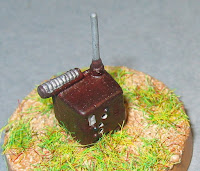 The camp had a radio for communicating with the outside world; the height of 1930s technology!  Was it used to relay secret messages to spies and saboteurs?  If the dials are still set then it might be possible to identify the last person to be sent a message; that would be a useful clue.  Perhaps there's a code book or some notes hidden inside the case?  It's got to be worth a look. 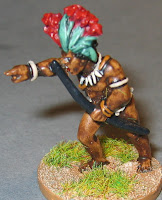 So, this man is hanging around the deserted campsite.  Does he know what happened to the archaeologists?  Did a swarm of army ants drive them off?  Perhaps he saw some group attack and capture the campers?  Perhaps he's a straggler from the group which captured them?  Does anyone speak his language, anyway? 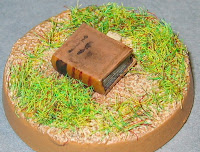 There's a leather-bound book lying in the grass near the campsite.  Was it dropped by one of the archaeologists?  It might have a wealth of clues as to what happened - but maybe it's in code?  Of course, it might just be poetry. 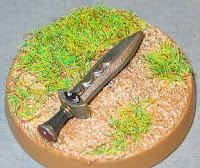 This is a particularly fine-looking knife, but it's a very unusual, perhaps somewhat archaic design.  Is this an artifact that the archaeologists found at a nearby site?  If so then it might point to an incredible lost civilisation.  Or perhaps it was dropped by an interloper - maybe it's some hidden cult's ritual dagger, mislaid in their haste to escape with more victims to sacrifice?  Hmm, I wonder if the ruby in the hilt is worth anything? 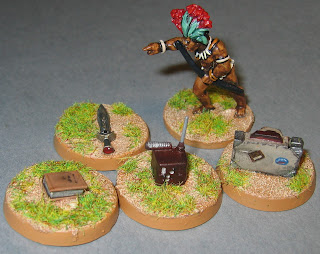 To see how we got on with these items and find out who won, who was eaten and who ran away, I'll tell you just this:

"Listen again next time for another exciting episode of The Adventures of Tarzan, Jungle Lord!"