Frostgrave: The Fountain of Dreams and Sorrows 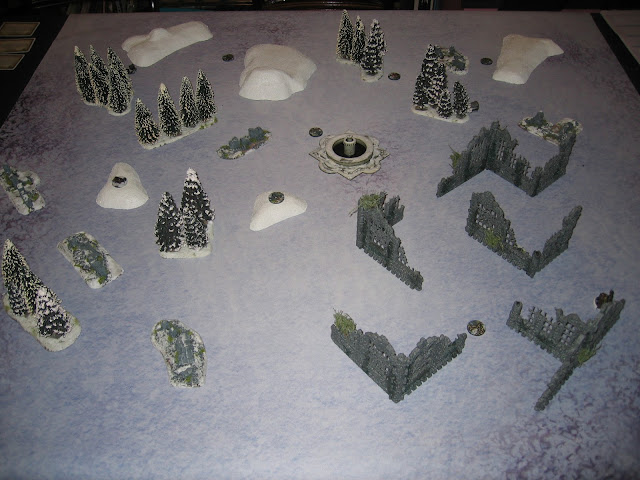 In the ruined city, there is rumoured to be a magic well that can grant visions to the wizard who drinks from its waters.  Sounds like tosh to me, but that's what they say...

On Saturday, Steve and his son came round to play games.  First up was Frostgrave; since both of my sons wished to take part (yay!) and I didn't have enough treasure markers or figures for a 5-player game, I offered to act as gamesmaster instead.  Here's how it went... 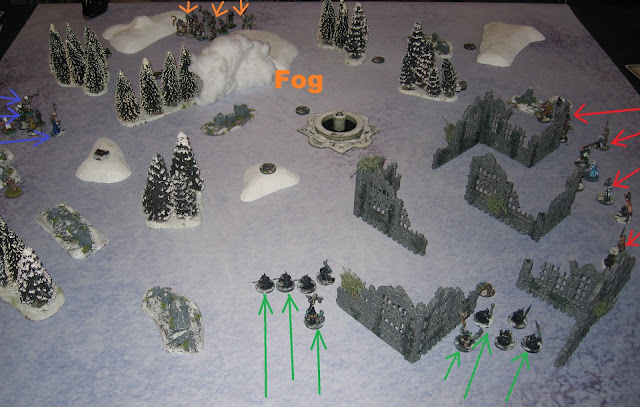 The game started predictably enough, with all 4 warbands advancing towards the centre.  Baryn the Timeless summoned a thick wall of fog to screen his party from the more dangerous, shooty wizards. 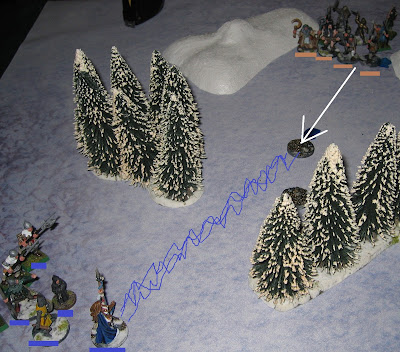 While Baryn was busy creating unnatural weather, Meyneth use Telekinesis to pull a treasure away from Baryn's puzzled followers. 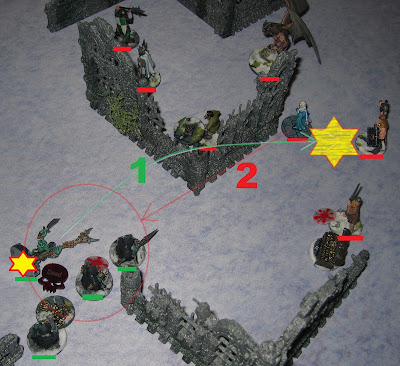 Meanwhile, in the opposite corner of the board, 2 apprentices came face to face at short range in the ruins.  Nemo, the goblin, acted first, but his grenade didn't have any effect.  Ellie's retaliatory fireball caught him full in the chest and took the goblin out of action. 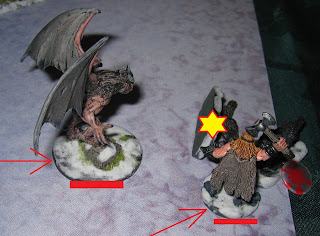 Our first wandering monsters (a pair of gaunt, emaciated wolves) appeared on the eastern fringe of the board.  Firestorm took no chances and sent both his barbarian and his demon (yes, he summoned another one!  That's every game so far!) back to deal with them.  As it turned out, the demon wasn't needed; barbarians are very good at killing wolves. 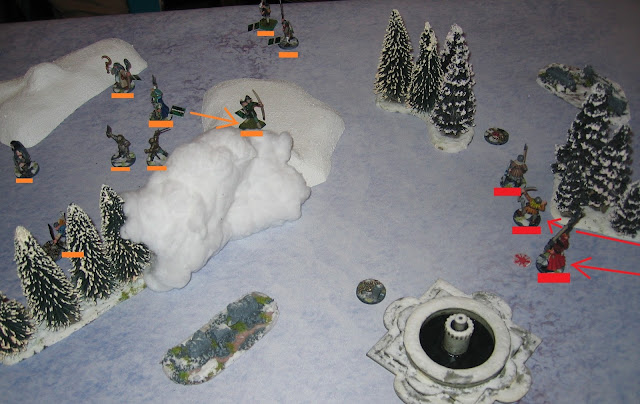 To the north, Baryn and his warband had mostly been milling about and facing off against Meyneth.  However, a new threat now appeared: Firestorm and some of his soldiers approached from the east.  One of Baryn's archers climbed a snowdrift and loosed an arrow at the enemy wizard, but was fried by a bolt of corruscating energy in return. 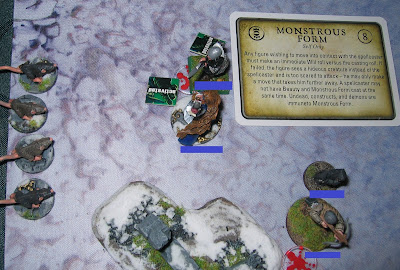 Meyneth now had problems of her own, though.  Her apprentice (Loki) had tried repeatedly to heal a crossbowman who had been somewhat injured by a goblin arrow.  However, Loki just couldn't get the hang of the spell.  Time after time, the spell backfired and injured the small, cowled figure instead of closing the soldier's wounds.

As if that wasn't bad enough, a pack of giant rats appeared nearby, no doubt attracted by the smell of blood.  In true illusionist style, Meyneth took the form of  a vicious snow leopard.  That should terrify the rodents, right? 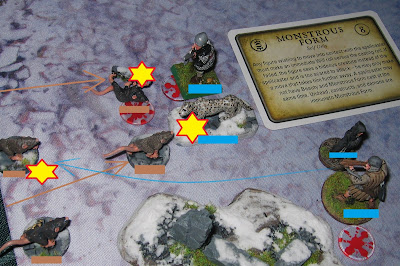 2 of the rats were indeed frightened and refused to attack the illusionary leopard despite their gnawing hunger.  However, the other pair were terrified and attacked in a blind panic!  Their furious assault rapidly drove Meyneth to her knees and then out of the fight, before any of her assistants could intervene.  Ouch!

The hirelings rapidly slew the rest of the rats, but when a pair of armoured skeletons appeared on exactly the same spot a turn later, the dispirited bunch decided to dodge around the undead monsters, slink off the table and head for home. 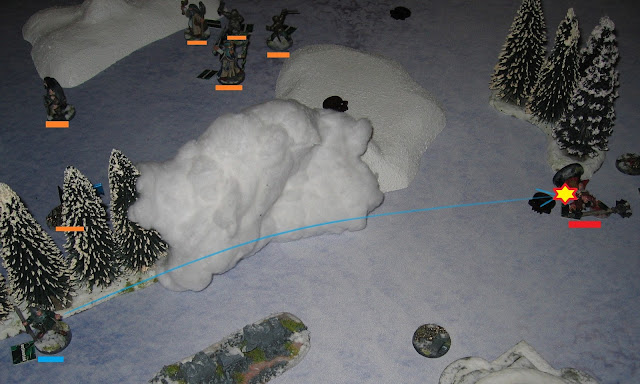 Finally, the over-exposed Firestorm met his end, though from a somewhat unexpected source.  Instead of being taken down by Baryn's numerous warriors, it was Meyneth's solitary archer who delivered the fatal arrow! 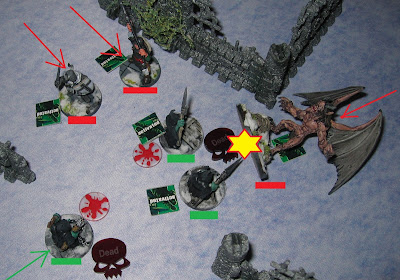 In a near-repeat of the last game, Firestorm's heavies assaulted the goblin infantry.  However, the goblins fought back ferociously; the little green meanies swarmed the demon and took it down! 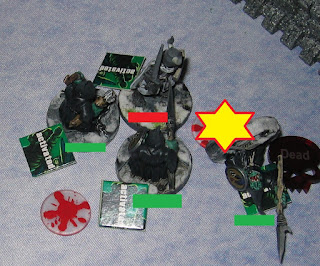 The melee swung to and fro; both sides took further casualties.  Finally, Firestorm's squad was reduced to just a single knight, whilst more of Peltar's goblins kept appearing to join in the fight. 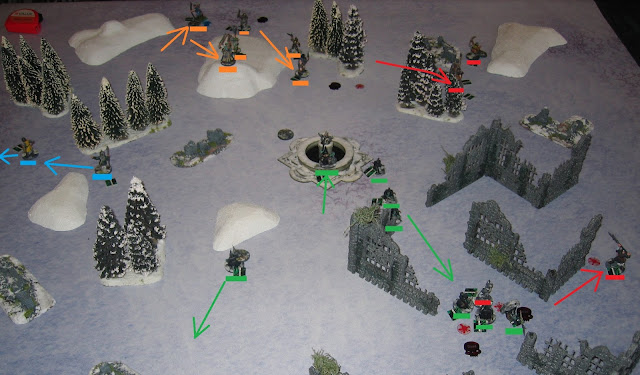 As we approached our self-imposed time limit for this game, a few scuffles were still in progress.  Mostly, however, soldiers from all sides were busy dragging away treasures.

This was another game much enjoyed by the participants (and me too, as umpire).  All sides seemed to stick very much with the tactics that they had used before: the elementalist strode forth, flinging out blazing bolts of energy, the chronomancer hid behind a wall of fog, the goblin enchanter had more success with archers than with magic and the illusionist messed with people's minds by pushing and pulling stiff about.