Let me tell you about an impulse purchase that I made this week.  I found a trader on eBay that was disposing of large numbers of the same old kit.  I can speculate that these may have come from a distributor that has gone bust or a shop that is selling off excess stock.  However, that's just a guess; I don't really know how these models came on to the market. 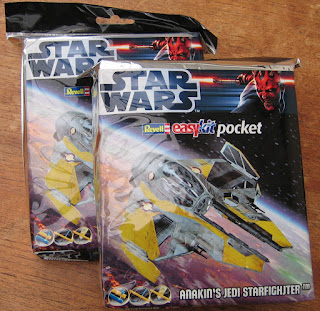 Anyway, I bought a couple of the Jedi Starfighter kits at £3.75 each (including postage!).  Now the problem I have is what to do with them!

Actually, I have seen this kit before and therefore I know that it makes a very nice, small sci-fi flyer which is pretty much perfectly scaled for 28mm gaming figures.  I know this because my younger son went through an intense Star Wars phase some years ago and built pretty much all of the relevant "easykit pocket" kits from Revell.  They're not to a constant scale (nothing like!), but all of the models in the range are about the same finished size, somewhere around 10-15cm long.

So, I've borrowed my son's rather dilapidated Jedi Starfighter and posed various figures alongside it to try to inspire a colour scheme and back story. 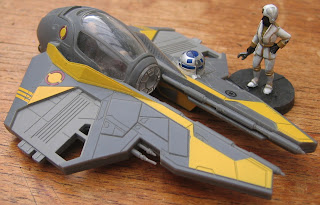 My first idea is that I could paint the 2 new starfighters white and give them Spectrum (Captain Scarlet) markings.  They would then make good alternatives for the iconic Angel Interceptor craft and I could use them in games of 7TV or the like.

I'd prefer a "real" Angel Interceptor, but I'm pretty sure that nobody makes a model that is even close to 28mm (though there is a paper model available somewhere on the Internet, I think).  Mind you, even if such a model could be found, it would probably be quite large for a games table!

If any purists gag at the idea of calling this an Angel Interceptor then I could call it something else.  After all, Spectrum had quite a range of aircraft in their fleet; this could easily be some previously-unseen jet.  Perhaps it's an "Angel Scout" or something like that? 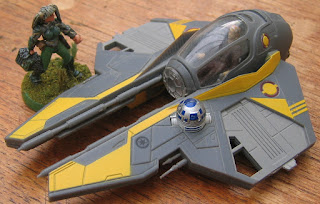 Alternatively, I could give the models a green/gray splinter camouflage to blend in with my sci-fi Viridian army (or paint them cream/black for my Syntha faction instead).  If I did that then they would be some type of reconnaissance or light ground-attack craft.  Sadly, I cannot see that they'd ever be used in a game since I don't really use any of my VOID armies and cannot see this changing in the future.  Still, they'd be nice to collect. 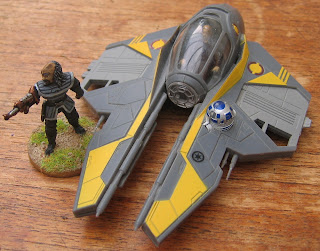 My final idea is that the starfighters could be painted up pale grey (for Federation) or dark grey, green or blue (for Klingons) and used as single-crew shuttles or fighters.  This doesn't completely fit in with the Star Trek universe; such tiny craft don't appear very much in the canonical version(s).  However, there are enough occurrences in spin-off works to justify pretty much anything.  In any case, it's my universe and I can do what I like, so there!

Have you ever bought something without having a need for it, either immediately or in the future?  Just because you liked it and thought that it might come in handy some time?  I'm pretty sure that most people do this at least occasionally!

I don't really know what to do with these kits.  I could even paint them up as non-airworthy sci-fi objectives, perhaps  being maintained and with inspection panels open.  Alternatively there must be many other ways that I could integrate them with one of my existing collections of figures.  I suppose that I could even start collecting 28mm Star Wars figures to go with the starfighters - but that'll not happen; it's a crazy idea!  Ah, what shall I do?
Posted by Colgar6 at 19:59