Time for a quick, mid-week post.  Here are some models that I've completed recently...


This pair should need no introduction; there are few pulp heroes more famous than Tintin and his faithful & highly intelligent companion, Snowy.  I've even heard that Indiana Jones took at least some inspiration from the many adventures of this young Belgian journalist.

Mind you, Tintin's history is somewhat tainted by a few of the early books in particular, which were deemed racist and ignorant even at the time of writing.  Information on this is readily available for those who care to research it, but I wouldn't bother if I were you.  Just stick with the middle and later works and enjoy the story... 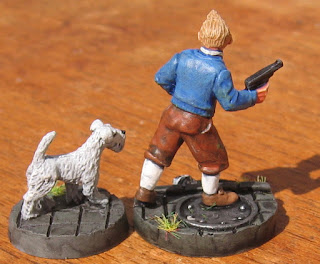 Both of the miniatures here are from Copplestone Castings' "GN9 - Sleuths" pack, which also includes a very nice Humphrey Bogart lookalike and a couple of other investigators that I don't recognise.  This set of 5 models can be had from North Star Miniatures for £8.50 .

Now if I'm going to create a Pulp band with Tintin as leader, then I'll need to find some other figures as well! 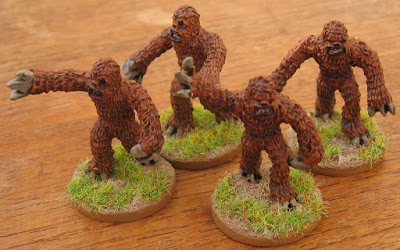 Time from some hairy monsters, I think!  These are Zorgls, from the somewhat patchy, but always inventive, Golgo Island range.  They aren't the most detailed figures I've ever had and the separate arms were a real pain to glue (& needed quite a bit of filling as well).  Those are the bad points.

In their favour, though, are 2 very important things: 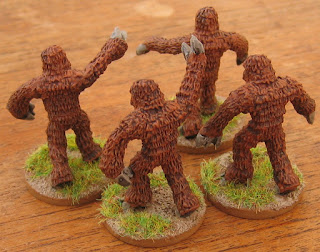 The Zorgls come in a pack of 4 from East Riding Miniatures and cost just £5.  There is an "Alpha Zorgl" available as well, though he doesn't quite fit in with my plans for these creatures.  The Alpha Zorgl has a deep sea diving helmet on top of his gorilla costume and is clearly modelled on "Ro-Man" from one of the worst sci-fi films of all time: 1953's "Robot Monster".  A nod to such an awful B-movie is very much in line with the bizarre world of Golgo Island, I think (and don't get me started on the giant zombie hamster!)

Next time: probably more Super Dungeon Explore, though I haven't really decided yet.  Wait and see...
Posted by Colgar6 at 20:34