The largest wargames event in Scotland (Claymore) is held in early August.  In other years, we've often been away on holiday at this point, but this year I had arranged for our family vacation to be in the middle of July instead.  The 6th of August was free, so we were able to go to the show!

Although all of my children (and wife) were offered the opportunity, only my younger son ("A.") wanted to come with me.  He's extremely keen on games days such as this, so that made up for the (mild) disappointment from the more general lack of interest.

It takes us just under 2 hours to drive from Helensburgh to north-west Edinburgh.  Let's just say that it's a tedious, though not particularly difficult, journey and leave it at that.

We arrived some 10 minutes before the official start time, but the doors were already open and many visitors had entered before us.  It's nice when you don't have to queue!

As always, what follows is a record of what A. and I did on the day.  It is not a comprehensive record of the games, traders or people present at Claymore, but rather just a description of our experiences.

Very near to the entrance, there was a tombola stall being run by the SSFSA (the armed forces charity).  We decided to spend some money on this and were surprised to find that both of us had won a prize.  I received a book on U.S. Rangers, whilst A.'s ticket matched a 28mm officer of Australian Light Horse!  I'm not sure what either of us will do with such items, as they're both quite a long way from any games or periods that we play... 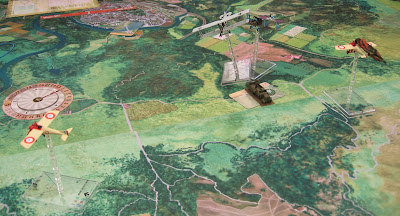 There were players needed in the first participation game that we came across, so we sat down to play some of the very popular Wings of Glory.  We were using 1916 aircraft; A. and I took a pair of French Morane Saulnier N monoplanes, whilst a couple of other young boys took some British clunkers to our right.  Opposing us were a mixture of German 2-seaters, eindeckers, observation balloons and the like.

I had enormous difficulty in working out the effects of the manoeuvre cards for most of the game.  I understood the mechanics easily enough, but found that my predictions of where my plane would end up were hopelessly adrift.  Consequently, I spent most of the game flying about pointlessly on the extreme left hand edge of the table.

Meanwhile, A's Morane was set on fire and eventually crashed.  He was given another, identical aircraft, but after tangling with the German 2-seaters, this was also set on fire.  A. flew off the table before burning to cinders, so perhaps his second plane survived? 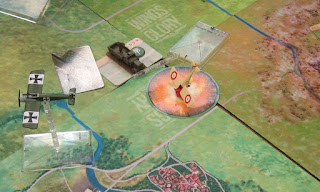 Just as I had (almost) figured out how to manoeuvre and had lined up a good, tailing shot on an eindecker, I was hit by flak and killed.  Bah! 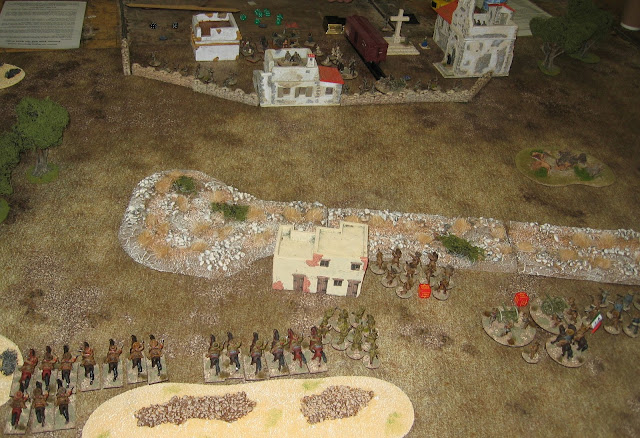 The next game we encountered was a Bolt Action skirmish set during the Mexican civil war and presented by the Glasgow and District Wargames Club.  We took a bunch of Villistas (?) whose goal was to overpower the Federales in a small town and rob the about-to-depart gold train.  Sounds straightforward enough; we were told that we had about a 2:1 advantage in forces. 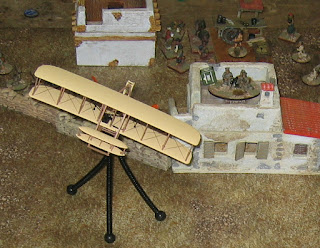 The game started well enough, as our American mercenary flier dropped a 75mm artillery shell onto one of the government machine gun positions.  He didn't hurt any of the crew, but he scared the cr*p out of them! 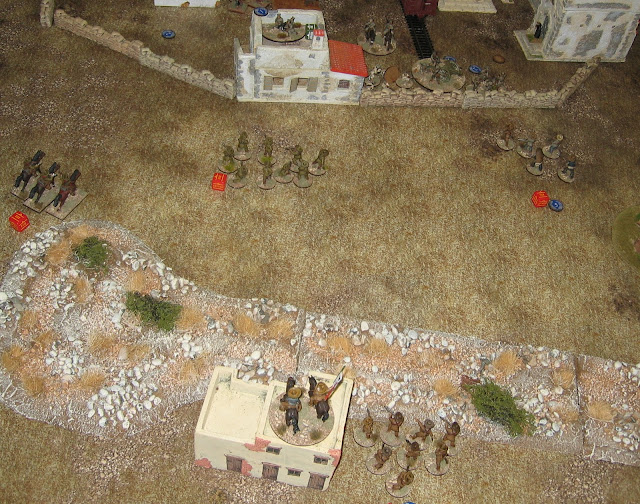 Our opponent in this game was a very young girl, with her dad and even younger brother watching from the sidelines.  She seemed to have a particular antipathy to my cavalry and shot at the horses on all possible occasions.  I thought that little girls were supposed to like ponies?

A. and I quickly found out that it was very difficult to advance with units that had PIN markers on them.  This led to our attacks going in piecemeal as each unpinned unit would charge forwards on its own, only to be gunned down by the defenders.  My glorious, flanking cavalry charge that was supposed to take us over the walls on the left was met by some particularly stubborn resistance; even though I inflicted 6 hits on the defending unit of 7 men, they all hit in return and routed my force.

At the end of the 6th turn, when the gold train departed, we hadn't managed to get even one figure over the sandbag wall...

I'd taken a packed lunch with us, since I've been dismayed at the quality (and price!) of the food offered at this and some other shows before.  The sun was shining and we were able to sit outside in the courtyard; it was good.


The Blue Bears put on a massed WWII aircraft battle, based on Operation Retribution (the German invasion of Yugoslavia in 1941) and using their own rules.  Each of the 6 players took a flight of 3 Yugoslav fighters, which were a mixture of Bf-109s, Hurricanes and their own, homebuilt IK-Z.  The goal was to shoot down as many Luftwaffe bombers as possible.

This we proceeded to do in style; it was something of a "turkey shoot".  The game was enlivened by small amounts of karaoke and the occasional group chant ("On, no!  Not the purple dice of doom!").  Luftwaffe fighters flew overhead, but too high to see what was happening, so we rampaged through the bomber formations and devastated them.

I have to admit that I felt somewhat uncomfortable with the resulting massacre; it was very one-sided and quite a long way from what really happened in 1941. 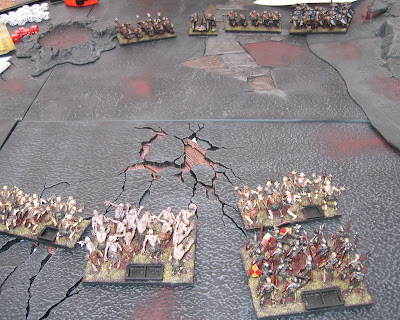 One set of rules which has been on my radar for a while is Kings of War.  This seems to be gaining a great deal of popularity, indeed it is perhaps the "go to" set for large, fantasy battles these days.  We had the opportunity to learn some of the mechanics in a little demonstration game, umpired by a very helpful and friendly representative (thanks!).

So, A. took a small force of dwarves, whilst I attacked him with an undead warband.

The dwarves' cannon proved to be spectacularly useless and I don't think it hit anything in the entire game.  However, the stunty warriors proved to be very effective; they carved their way through my ghouls and skeletons in short order (groan!).

My leader, the necromancer, was forced to get involved personally in a messy melee to try to prevent the Dwarven rampage.  Although he eventually succumbed, he did allow the zombies time to fight back. 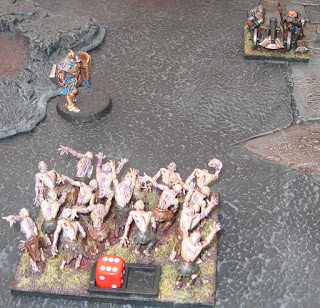 One after another, the Dwarven units fell to the all-conquering, but heavily beaten-up, zombies.  This was a complete surprise to all of us; when we called time on the game they were facing just the Dwarven warsmith and their cannon.  I'd say that it could have gone either way after that... 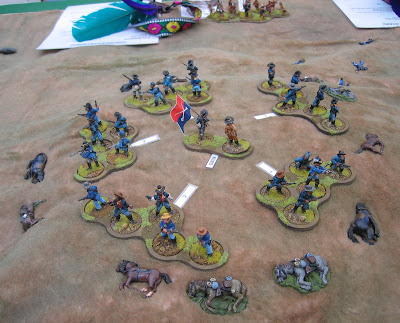 In the dying 30 minutes of the show, just as we were tiring and wondering whether to depart, we came across the Leuchars Veterans' game: Custer's Last Stand.  I've taken part in some of their games before and they are always great fun: short, simple, effective and usually with excellent props as well.

Each of the 5 (or was it 6?) players took a band of Indians - and yes, we did all wear headdresses with feathers in them.  The measuring sticks were modelled as arrows and our goal was to be the one to scalp Custer.  Note that there wasn't a whole lot of doubt that this would happen as the Indian forces were considerably larger than the remnants of the cavalry! 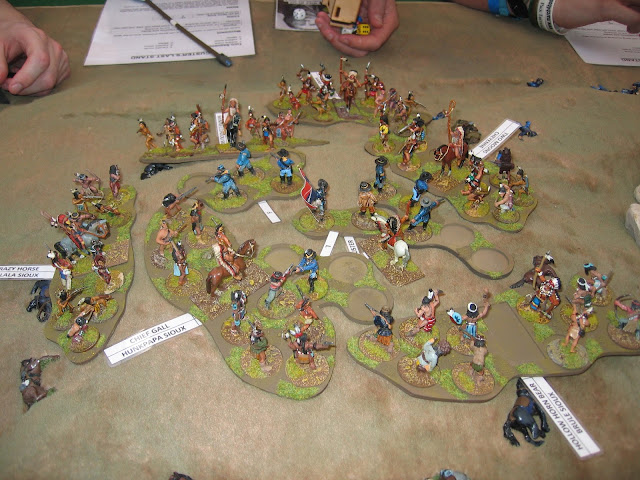 Between us, A. and I were first up onto the hill.  I may just have positioned my warriors to block some of the other players ("Oh, sorry, Crazy Horse!  Am I in your way - I hadn't realised?"), but all's fair in love and war... 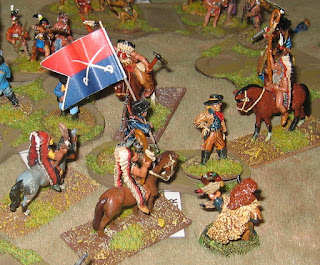 Despite being the first to attack Custer, Hollow Horn Bear (A.'s chieftain) just couldn't kill the general.  Indeed, Custer managed to kill A's horse and thus dismount him!  My leader (chief Gall) was also in early, but failed to make any impression.

At the end, Custer was surrounded by no less than 5 chieftains.  It became a lottery as to who would strike the killing blow; many dice were rolled only for the owner to sigh in disgust at the lack of any of the requisite 6s.  Eventually, the flag-bearer was slain by someone and the very next Sioux chieftain killed Custer.  Suffice it to say that it wasn't either A. or myself who took the honour!

Another tedious trip in the car, this time with the driver (me) somewhat fatigued.  I really wish that public transport was a plausible alternative, but the Granton venue is just not suitable for this if you're coming from outside of Edinburgh!

Between games, we did a fair amount of shopping.  I say "we", but in reality it was just I that bought things.  We did have a few casual looks at the bring-and-buy, but it seemed especially crowded this year.  The bring-and-buy tables also looked to be stacked high with items, thus making it hard to see what was on offer.

So, just traders, then.  Here's what we came home with: 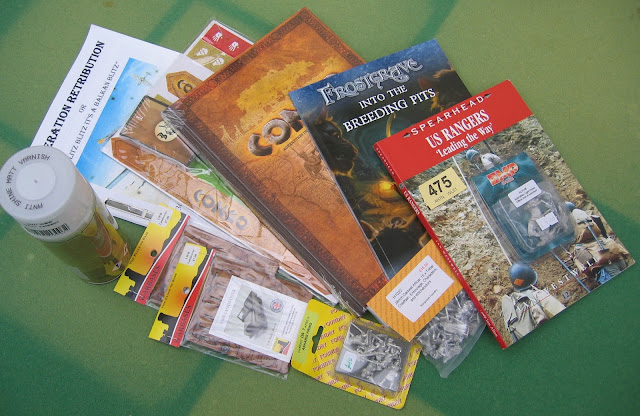