If you're a regular reader then you may remember that I visited the Claymore 2016 show recently.  Amongst my purchases were a couple of Land Rover kits from Warbases, a local(-ish) Scottish company.

I've been on the lookout for some early Land Rover models for quite a while; these could be used as British farm vehicles or as light army transports (especially for the Brigadier and his UNIT troops from Doctor Who).  Alternatively, with a different paint job and a lot of stowage, they could be part of some long-range, cross-continent expedition.  A Land Rover painted with white and black zebra stripes could be the wheels for game wardens in the savannah (anyone remember "Daktari", I wonder?).  In fact, they are very versatile & rugged vehicles and could be used for almost anything from the 1950s onwards! 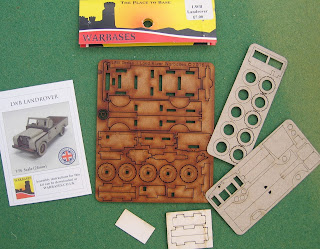 I was delighted to find that Warbases makes Land Rover MK1 kits; I'm guessing that these are a new addition to their catalogue since I don't remember hearing about them until recently.  The vehicles come in SWB (short wheelbase) and LWB (long wheelbase) versions; both kits are priced at £7.00 .  They're the right vintage for my purposes and they don't cost too much - but how well do they work?

The LWB Land Rover kit has a somewhat surprising 53 parts, laser cut from a variety of materials including strong MDF for the body shell, thinner card for the skin and textured card for the floor.

So, how was this model to build?  Firstly, the instructions: there aren't any in the kit.  Instead the company's website is given, along with the information that the instructions can be downloaded from there.  That's fine; it saves paper and packaging cost.

Now, you can call me stupid if you like, but I had some difficulty in finding the downloadable instructions on the Warbases site.  They are there, but it took me a while to find the link, though it seems obvious in hindsight.  Another disappointment was that once downloaded, the instruction document wasn't very easy to follow.  It consists of a large number of small, slightly blurry photographs following the stages of construction.  I had some difficulty in deciding which pieces were needed for each stage, particularly for the early steps.

OK, I'm an experienced model-maker.  Using the instruction sheet, I worked it out and despite the large number of pieces, the kit went together very rapidly.  Note that I did the build over several sessions, as I found it necessary to clamp some of the curved parts around the front of the vehicle (and leave them to dry) before proceeding with the next stage. 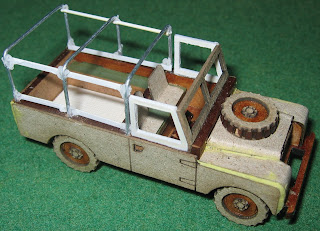 I decided even before I started on the first of my pair of Land Rovers that I wanted to make them quite distinct from each other.  The most obvious way to do this was to give one of them a soft top, but there was a problem: the Warbases model has a windshield but doesn't come with any windows for the driver's or passenger's doors.

I've looked at a number of photos of Mk1 Land Rovers over the last week or so and they do come in a number of configurations.  The Warbases version with no door windows  is certainly a valid version, though it seems to me that it's less common than vehicles which do have them.


To fill this void, I constructed some door windows (cut from thick plastic card) for both of my Land Rovers and added a frame for a canopy to one of them.  These are fairly crude and probably not particularly accurate with respect to any Land Rover blueprints, but they work for me.  I used some cloth to cover the hooped frame; this was actually quite difficult as I wanted to be able to remove the canopy during painting so as to be able to paint the inside of the vehicle. 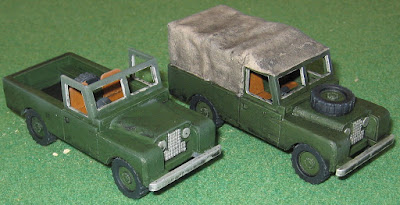 I didn't put a lot of effort into painting the 2 Land Rovers.  They were primed, then coated all over with olive.  Details were picked out in dark grey or silver (tan for the seats, lichen grey for the canvas canopy) and then each model was given a black wash. 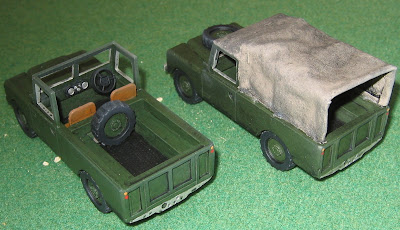 Finally, a couple of tiny orange and red dots were added to the rear, as indicator & stop lights.  Job done!

I'm very happy with the way that these kits have turned out.  They were models that I had wanted for some time (though I'm now mildly irritated to discover that 1970s UNIT used an SWB Land Rover, not the LWB versions that I have here).  I'd be very happy to buy further Warbases kits, if there were any that suited my gaming genres.

Cost: 4/5.  Not too expensive, but I've seen other kits of similar size that are cheaper.  Then again, those have less complexity...
Construction: 3.5/5:  Poor instructions, slightly loose parts, some filling needed.  Despite these caveats, finishes into a well-detailed model with little hint of its internal MDF construction.
Usefulness: 5/5.  Land Rovers can be used for almost any setting, almost any time from 1948 onwards and for almost any purpose (military, domestic, wilderness, rural...).
Overall: 4/5.  A very nice piece once built, though you might wish to add some extra details.