Back in February this year, I showed some plot point markers that I had built: 5 Plot Points.  These are primarily intended for use in games of Pulp Alley, for Tarzan and his opponents to squabble over.  Since then, I've had a load more ideas; some of these have now been translated into models.  After all, it wouldn't do if every game we played used exactly the same set of objectives, would it?

There's nothing that says "danger!" more clearly on a jungle trail than the occasional skull on a post.  Whether you call these "fetish posts", "jungle totems" or something else altogether, they should strike fear into the weaker-willed members of the party.  Nevertheless, they are a sure indication that you are approaching something important.

These models are very simple to make: just stick a skull onto a rod.  I've tried to make them a bit varied by adding a second skull, a second post or an animal's tail to some of these bases.  There's not really much else to say about them.

The jungle is full of strange creatures, many of which aren't known to science.  The explorer who brings a specimen of such a rare creature back to civilisation will gain much renown!

This particular weird animal came from a large packet of assorted alien critters that I bought many years ago from the long-defunct Amazon Miniatures.  They're slightly crude sculpts, but a wonderfully alien bunch of bugs and I really ought to use more of them for something. 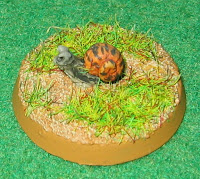 Here's a slightly more normal creature - a giant snail.  It's not completely imaginary either, as African Land Snails can grow up to 20cm in length.  This one is just a bit larger than that, that's all!  And here's a bonus: if science isn't interested in enormous snails then they make loyal, friendly pets.  Failing that, there's good eating on them, if you like escargot...

My giant snail comes from Black Cat Bases, who have a very interesting and extensive range of "accessories", both man-made items and small animals. 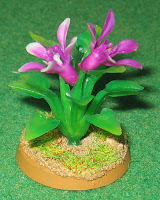 Last in this section is one for the botanists: a rare purple jungle orchid.  Maybe the nectar can be distilled into medicines or psychedelic drugs, or perhaps its beauty will spark a gardening craze and everyone will want one in their conservatory?  It must be of some use to someone, surely.

This model is a hybrid: the greenery comes from a plastic model railroad plant, whilst the flowers have been sourced from some aquarium plants I bought a long time ago. 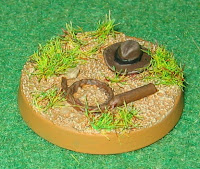 Someone has left a whip and a battered, old Fedora lying around.  Holding them makes you feel exceptionally capable and very lucky, though.  How strange...

The whip is scratchbuilt, whilst the hat comes from Black Cat Bases. 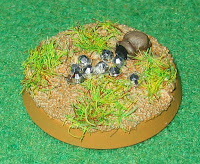 My last plot point is a small pouch that has been dropped and is spilling diamonds over the ground.  In this case, the pouch was moulded from one of my Basius II pads, though it could just as easily have been scratch built or have come from a kit.  The diamonds are just very small rhinestones; a packet of about 100 of these cost just over £1 from my local craft superstore.  I've got plenty left over for other projects!


The Collection So Far 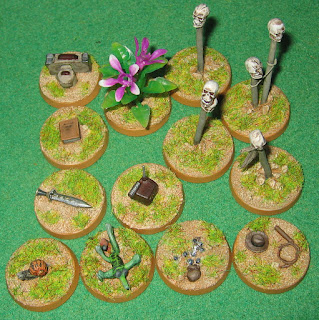 I'm beginning to build up quite a number of plot points/objective markers.  The picture above includes those that I built earlier as well as the new ones.  If you include the possibility of using figures as well (such as lost missionaries, recalcitrant natives, shifty traders and the like) then I can probably run quite a few games before I have to reuse any of them.  I like the sound of that!