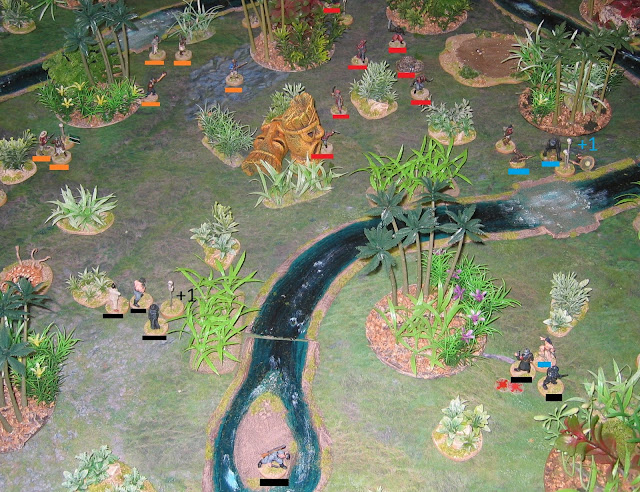 The last episode saw all 4 leagues starting to collect their first few plot points.  With most of the characters poised within reach of the overgrown statues, it's time for part 2! 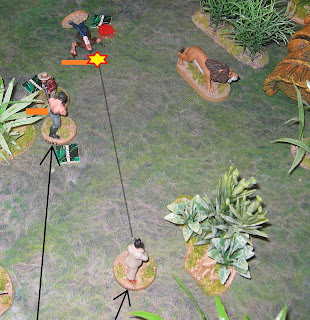 Nazi goons and Safari henchmen clashed near the lion's hiding place.  The Safari's guide was shot down, whilst brawny Kurt, not fancying his chances in a firefight against Quartermain, closed with the hunter and started to wallop him.  [Here we had some confusion: the rules state that only the closest opponent may be fired upon - but Johann wasn't allowed to shoot into a melee and therefore couldn't target Quartermain.  We decided that the rule must mean the closest eligible opponent and thus Johann shot the guide instead.  This interpretation would also work when an enemy is out of sight behind a wall; it would seem odd to insist that a shooter couldn't then aim at someone else who was technically further away] 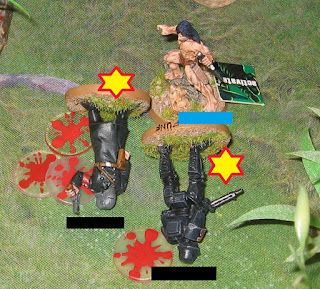 Tarzan continued to do what he does best: thumping people!  Both Stahl Mask and Panzerbot 5 were floored, though neither was out for the count. 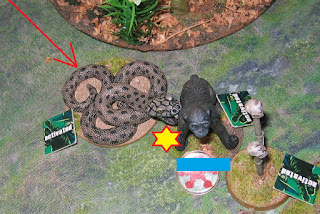 All was not well for the Jungle Alliance, though.  Koko gave out a mighty roar that caused a couple of cultists to panic and run, but their giant snake wasn't impressed [maybe it's deaf?].  The reptile slithered close without being seen and then attacked!  Once again, Koko came off worse in the fight [this is the 3rd game running where the snake has made a beeline for the gorilla and has savaged him.  It's becoming a bit tiresome, really - especially as the stats for the 2 models are relatively evenly-balanced]. 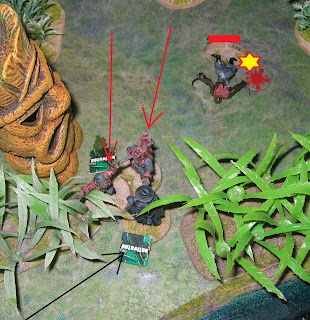 Herr Stengel pushed his way through the jungle, very close to the fallen statues and ultimate victory.  Before he could reach his goal, though, he came face to face with 2 cultists (including their leader).  A third cultist (Saeed) also tried to join in, but was flattened just short when a rotten branch fell on him [Fate cards were being played with abandonment from about this point on; since the players had hoarded them up till now, they all had a good stock.  I forget exactly which Fate card this was, or who played it, but it knocked Saeed out for good]. 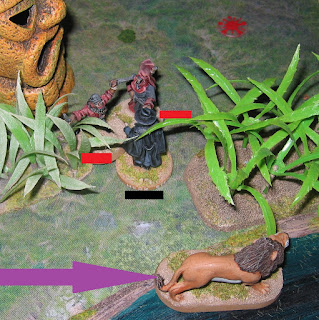 Whilst the Nazi and the 2 cultists fought with each other, neither side managing to land a blow, the lion wandered down to the river for a drink.  All 3 combatants took a peril for this, but they were so engrossed in their melee that none of them even noticed the beast [i.e. all of them passed their tests]. 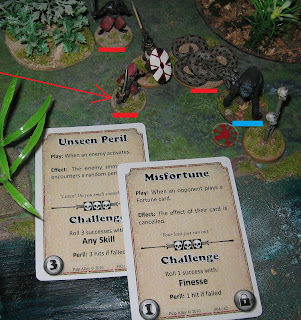 The cultists now had an opportunity to "convert" one of the masked natives.  Firstly, Nadeem approached him, but the perils started to fly thick and fast.  Nadeem survived a rather nasty "3 successes/any skill" peril, but then failed to muster enough finesse to convince the native to join his cause. 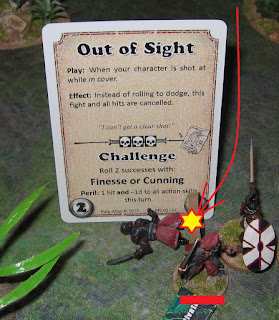 Then, one of the cultist guardians had a go.  He also had a peril played on him, but he failed the test.  The native jabbed at the cultist with his spear and knocked him out before disappearing into the vegetation.

Judging by the number of cards played against them in such a short period, it seemed that none of the other players were in favour of the Snake Cult... 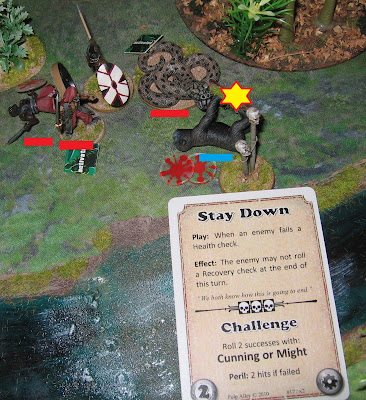 Whilst all this was going on, the giant snake continued its fight with Koko.  It tightened its grip until the gorilla passed out and then played a "Stay Down" card to ensure that he wouldn't be getting back up in a hurry.  Poor Koko... 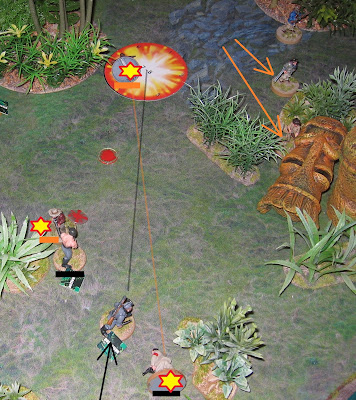 Back in the west, all sorts of things were going on: 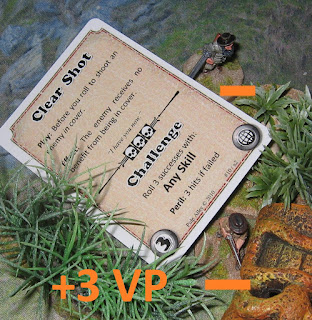 Before anyone could stop him, Sir Henry reached into a hidden crevice in the statue and withdrew a small, leather bag.  He tucked it into his shirt and prepared to retreat [+3 VP for the Safari, for a cumulative total of 5 VP.  Surely that's an unassailable lead!]. 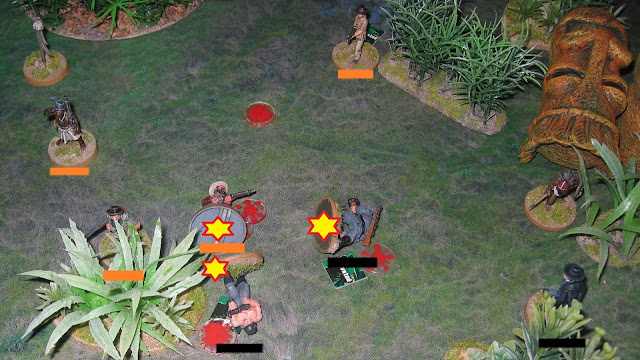 The brush war continued, with both the Nazis and the Safari taking losses.  I cannot remember who shot who, or who was thumped, but the end result was several more figures knocked out.  Interestingly, both of these sides were now making much more use of cover; very few of their characters continued to stand in the middle of the jungle clearings.

Note that Herr Stengel had managed to evade the grips of the 2 cultists he was last seen grappling and was looking for more plot points that he might yet score. 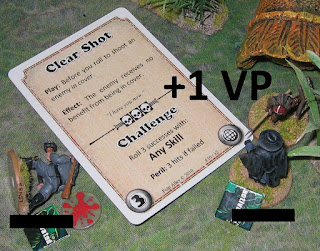 Seeing a Masked Devotee nearby, Herr Stengel approached the man.  He used all his cunning to persuade the native to come with him for a little camp-fire chat.  +1 VP to the Nazis, for a cumulative total of 2 VP! 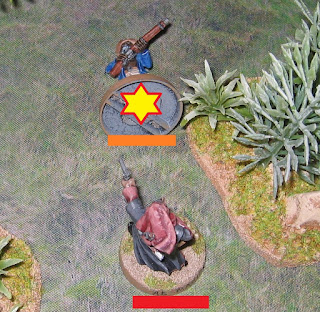 The cultists vented their frustrations on anyone who was nearby.  Al Masudi shot down an ascari, even though the latter was hiding in cover... 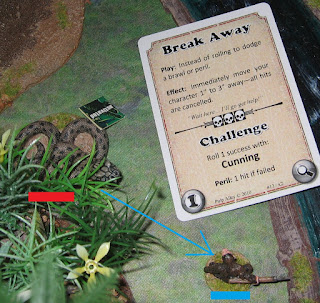 ...whilst their snake tried to corner the last of the simians.  Only a timely "Break Away" card saved Tarzan's ally... 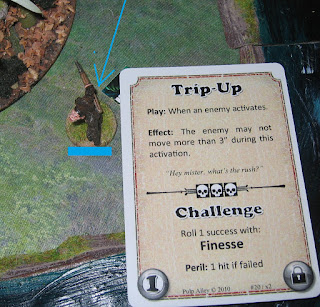 ...who promptly tripped up in his haste to flee!  [It was the last turn, so the players weren't holding back any cards that they still had in their hands]. 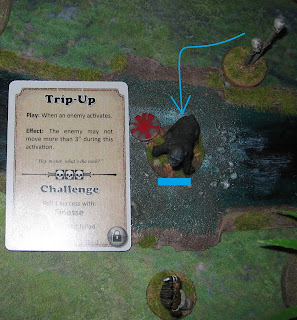 In the dying moments of the game, Koko recovered enough to stand up.  He saw one of the masked natives within reach (on the other side of the river) and staggered towards him.  However, the gorilla was still suffering from concussion or something; he collapsed in a heap half-way across the ford and the native vanished back into the trees.  [What, another "Trip Up" card?  The cultists have been collecting those, it seems.  Not fair!] 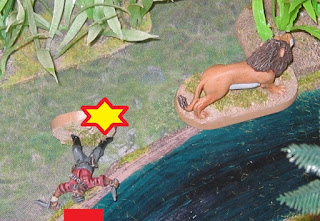 Finally, the lion killed one of the cultists.  The beast had seemed somewhat disinterested throughout the game [almost always moving into areas without any people nearby], so maybe this cultist died of fear rather than being mauled?  At least it was one of the bad guys! 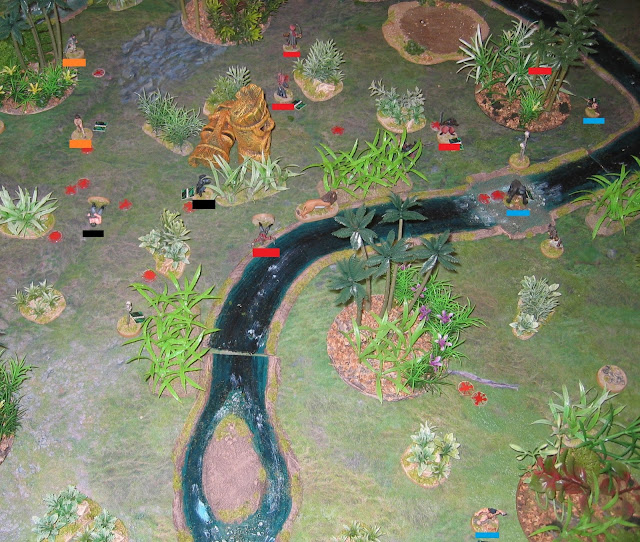 At the end of another thrilling match, this was the state of play: