We just had another day of gaming, so I've got a couple of battle reports to make.  I'm going to describe this one first, for reasons that should become obvious in due course (don't be concerned by this; it's nothing sinister or anything).  So, without further ado, let's enter the world of Greek Mythology for a game of 7th Voyage! 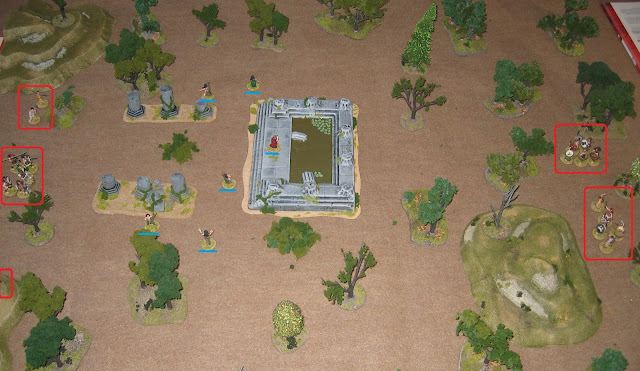 Medea, the sorceress, has retired deep into the untamed woods, intending to take the waters in the lost and forbidden bathhouse of Queen Semiramis and thus refresh both her body and her mystical powers.  Annoyingly, a palace servant has revealed her plans to the Argonauts who are visiting her father's kingdom.  A band of these adventurers plans to capture the princess in the act and drag her back to the palace in order to curry favour with the king.  [I'm taking some liberties with the classical story of Jason and Medea here; if that bothers you then just think of this as some other sorceress called "Medea"].

This will be variant of the standard "Steal" mission from the 7th Voyage rulebook.  Instead of trying to obtain a magical item, the Argonauts intend to capture the sorceress herself.  Can't be that hard, can it?  One woman, on her own, against a large band of armed warriors?

Medea heard the sounds of men crashing through the bushes near to where she was standing.  She cast her sight through the undergrowth to find that a number of her father's guests were creeping up on her, their very presence defiling the holy site of the ancient ruins.  Annoyed, she started to summon the spirits of wood and water to punish the invaders... 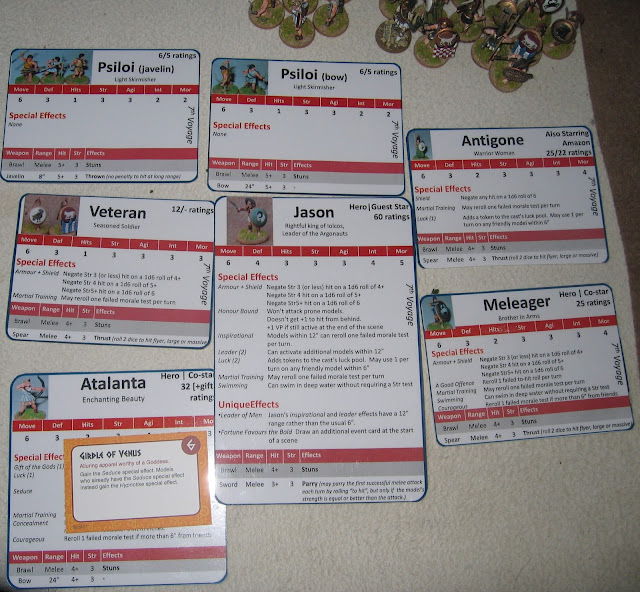 Jason's force was made up from the following:
That's quite a big cast (19 models), with a great deal of martial prowess.  It'll be difficult to stand up to them in a straight-up fight!

Medea and the Woodland Spirits 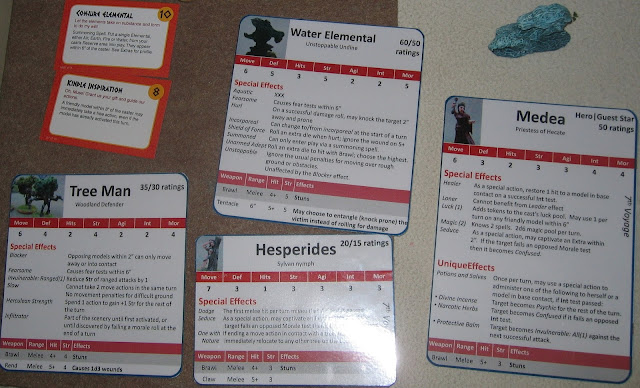 The sorceress was able to call on these spirits as her defenders:
This is a strange, mystical cast.  Half of it is highly mobile and armed with seductive powers, whilst the other half is slow but unstoppable (well, almost).

Note that of these 11 figures, only Medea herself and the 5 Hesperides would start on the table.  The treemen had their positions plotted on a map; their Infiltrate rule would keep them hidden for at least a turn or two, whilst the Water Elemental could only be brought into play via a successful Conjure Elemental spell. 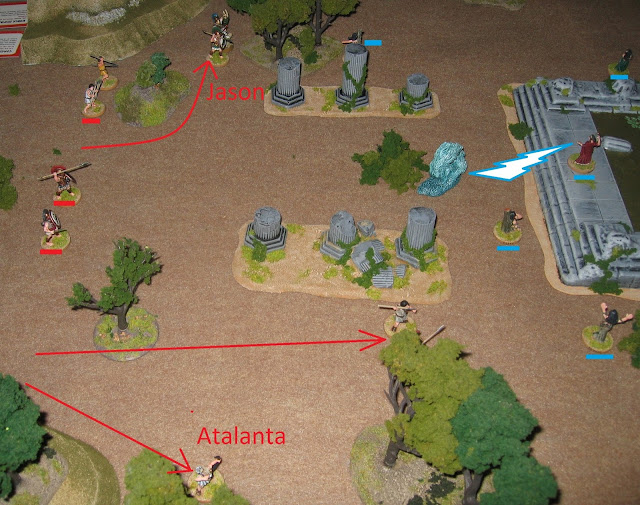 Medea spent the first turn chanting, then cast a spell to summon the water elemental [success was never in much doubt: she threw 2d6 + 4 (int) + 2 (chanting) and only had to reach a score of 10.  If by chance the spell had failed on turn 1, she'd just have tried the same thing again on turn 2].  Waters rushed from the bath and surrounding bushes to form the shape of a gigantic horse just in front of the sorceress.

Jason's party decided to split up, in a rather feeble attempt to distract the dangerous-looking water creature.  The hero himself went north around the ruined columns, Atalanta went south through the trees and a reserve stayed in the middle, ready to march forward when needed. 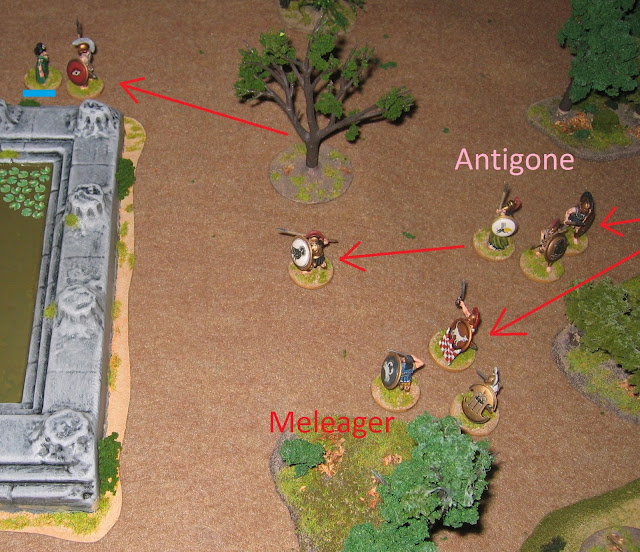 On the other flank, Meleager and Antigone advanced their men without meeting any real opposition.  This was just a walk in the park, right? 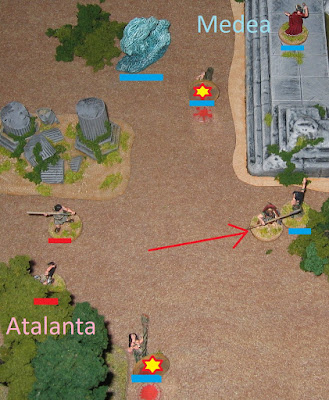 First blood was drawn by Atalanta's group.  They advanced rapidly and started to slaughter all the wood nymphs they could find.  This despoiling of nature was quite brutal, really... 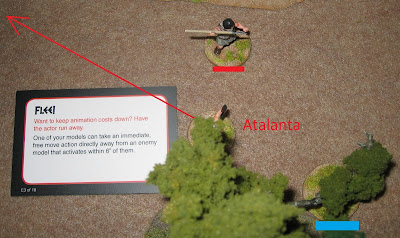 Suddenly, the forest came alive!  Near all the groups of Argonauts, the trees themselves stirred and reached for the invaders with long, supple branches.

Atalanta, sensing danger, was quick to react.  She ran away from the copse in which she had been sheltering just in time; the newly-activated tree monster could only roar in frustration as it failed to catch the nimble archer. 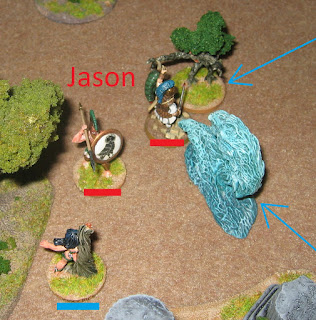 Others were not so lucky.  Jason was caught by one of the treemen and then battered by the water horse as well.  He may have been a great hero, but this was a fierce assault and he wouldn't last long unless the attackers were distracted or driven off. 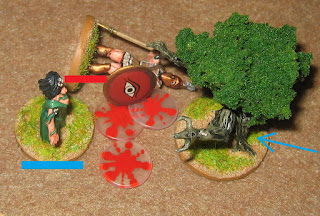 Poor Nauplios was sandwiched between a nymph and the 3rd tree monster.  He was knocked to the ground and then torn limb from limb as he lay there, stunned.

The final treeman strode from the forest near to Meleager and scared the cr*p out of him!  It then pummeled one of the other Argonauts into the ground, but the day was saved when Antigone charged over and slew the monster with a couple of quick blows.  "They're not so tough", she called out in encouragement to her fellow warriors.  "Just hit them in the buds."  But Meleager couldn't get over the shock; he just curled into a ball and could be heard whispering softly "the trees, the trees..." 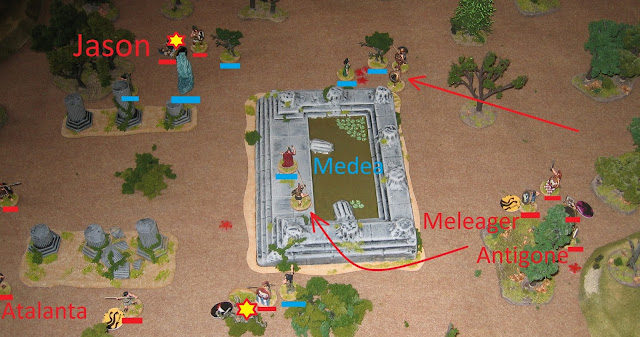 Despite the best efforts of his immediate support, Jason was being hammered.  The water elemental had him pinned on the ground and was debating which was the best way to finish the hero off for good.

Elsewhere, Pheidippides killed another of the tree monsters, though it took him rather more effort than Antigone had suggested.  More Argonauts poured forwards from the east, even threatening to overrun Medea herself. 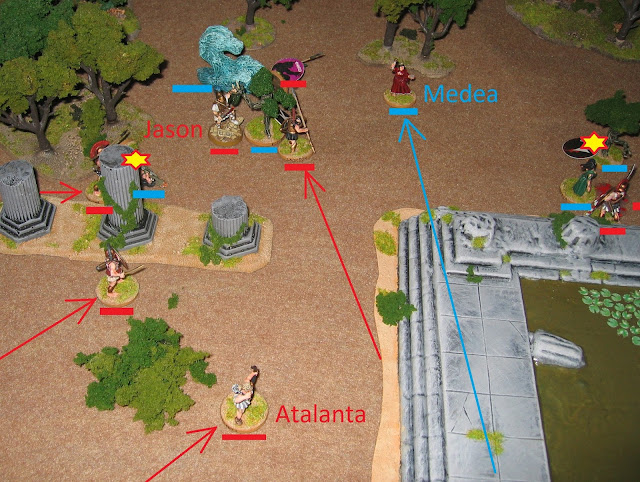 Medea made a run for it, whilst Argonauts rushed from all sides to assist their beleaguered leader.  Those coming round the north of the ruined bath paused briefly to dispatch the dryad and treeman that blocked their way. 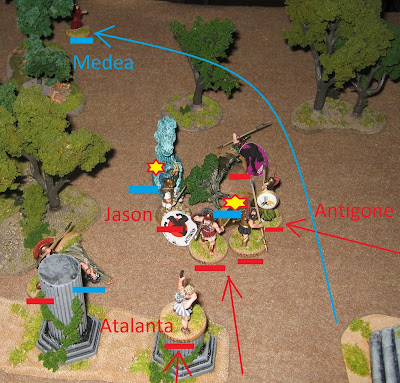 Jason may have been bruised and bloody, but he wasn't finished yet.  As the melee swirled around him and his friends were tossed aside by either the water monster or the enraged treeman, the hero stood up and stabbed the elemental.  His sword must have hit a vital spot for the creature hissed in pain [that's 1 of its 3 wounds gone, then.  Took a lot of effort to achieve even a single point of damage...].

To cap this, Antigone effortlessly slew the last tree monster, albeit assisted by several other Argonauts this time. 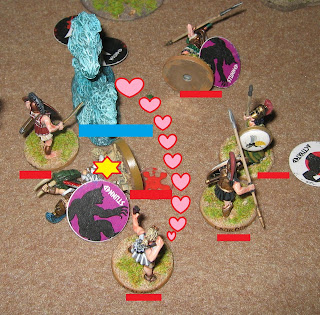 The water horse may have been alone, but it was by no means defeated.  It rounded on Jason and smacked him down again; once again the leader of the Argonauts lay groaning in the mud.  Brave Ialmenos smote the monster in the flank and (miraculously) managed to wound it [it's now lost 2 wounds out of 3].

However, the final word went to Atalanta.  After hanging around the fringes of the fight, looking for an opportunity to shoot with her bow, she suddenly remembered the Girdle of Venus.  The water elemental was an extra [it's a stop-motion monster, which counts as an extra rather than as a hero or villain] and was therefore theoretically vulnerable to an attempt at Seduction.

Atalanta called to the water horse with her most soothing, persuasive voice.  Probably she had an apple or two to hand as well - horses like those.  Hmm, to be successful, she needs to win an opposed morale test; her base morale is 3 and the elemental's stat is 5, so this is going to be tricky!  I decided to use an event card to gain +2 to my chances [event cards can be used for this minor effect rather than for the major effect which is printed upon them], thus making the base scores 5 vs 5.

Both sides rolled a dice to add to their total; both dice came up with a '2'.  This wasn't enough; Atalanta had merely equalled the necessary score and hadn't beaten it.  I had almost given up in despair when I suddenly remembered that Atalanta had Luck and could re-roll the die.  Excellent!  The re-roll was a '5', thus the heroine's total was a 10 vs the elemental's '7'.  Atalanta succeeded in hypnotising the water horse and bringing it over to the Argonaut's side! 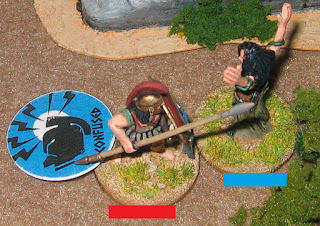 Even though the Argonauts seemed to be running away with the game, the nymphs weren't quite done yet.  Dryope used her seduction successfully on Pheidippides.  As the pair were out of sight and a long way from any other models, I suspect that they walked off together into the sunset and that the warrior was never seen again (though his beautiful child might have returned to the world of men in 18 years or so)... 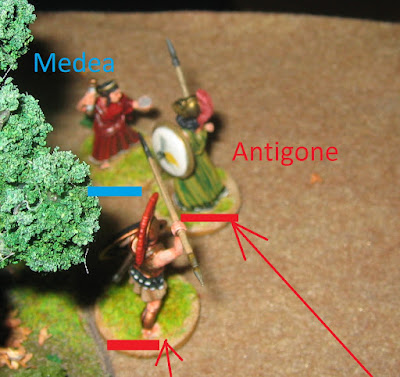 The game was sealed for the intruders when Antigone ran after Medea.  She found the sorceress cowering behind a tree and dragged her back roughly to the victorious Argonauts.

This was pretty much a total victory for the Argonauts.  Medea's forces were all but exterminated, whilst relatively few men were killed, seduced or otherwise lost.

The Argonauts had a few scary moments, mostly when the treemen burst from cover.  Despite their initial successes, these monsters couldn't handle the sheer numbers of veterans who counter-attacked them; the fearsome effect wasn't as useful as it might have been against less battle-hardened warriors.

Medea and the Hesperides had many interesting abilities, but these were barely used as the woodland cast tried to match the Argonauts in a straight-up fight.  The "hitty" treemen and water horse were given all that cast's activations, whilst the nymphs were left to be slaughtered.

Model of the Match: has to be Antigone.  She cut her way through 2 (or was it 3?) treemen and was the one to capture the sorceress at the end.  Brava!

Most Disappointing: I'd say it was a tie between Medea (who just sat around looking pretty after her initial summoning spell - not what one would expect from a major league sorceress) and Meleager (who was scared witless when the forest started to move and is, for all I know, still cowering in fear).