Another Sunday, another duel - it must be Zomtober!  Here are another pair of figures, one from each side of the zombie apocalypse, for your amusement, education or whatever else you gain from the brief time it takes you to skim over this article :-) ! 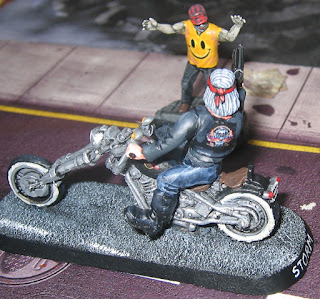 For today's show, we have a couple of older gentlemen (though I use that term cautiously; I'm not really certain that either of them is particularly genteel or well-mannered).  On the motorbike, we have Storm, whilst moaning at him from the side of the road is Old Man Zombie (OMZ). 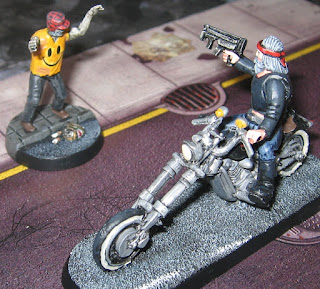 It is possible, at least in my mind, that OMZ isn't really a zombie at all, but just an angry old sod.  He has made some strange wardrobe choices: the smiley tee shirt might have been a present from a favourite grandchild, but it doesn't really fit with the cold-weather hunter's cap.  Maybe OMZ is just a confused, older guy who is shouting at the biker for having thrown a beer can and cigarette butts at him?

OMZ is a Studio Miniatures plastic zombie, mounted on an Escenorama resin base and decorated with a home made tee shirt decal. 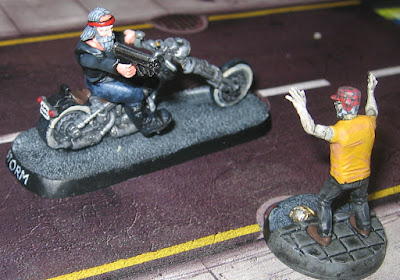 Storm doesn't seem to have any doubts about OMZ's status: he's a target!  At this range, the biker's sub machine gun shouldn't have any difficulty at all in cutting down the zombie if it is used properly.  But (and this is one of my pet peeves with some wargames models and some Hollywood movies) if the bike is moving then aiming a gun sideways whilst retaining control of a vehicle is nigh on impossible!  One or the other will give: either the bike will crash or the shots will be essentially random.

Before anyone claims that just strafing a target with an automatic weapon will be good enough, I've done some simple maths.  If the SMG fires at 600rpm (not uncommon for such weapons) then there is 1/10th second between each successive bullet.  That doesn't sound like much, yet a vehicle travelling at a mere 36Kph (i.e. around 20 miles per hour) will move 100cm (about 3 1/4 feet) in that time.  Which gives you about a 50% chance of hitting a 50cm wide man at all, let alone achieving a crippling head or centre body shot on a zombie.

Storm is a Westwind Productions model, placed on a base of my own construction and decorated with a home made jacket decal.  There are very few 28mm biker-on-bike models around, yet I'd hesitate to recommend these kits.  They can be finished nicely and are not at all badly sculpted.  However, they are a real pain to put together and require quite a lot of cutting, filling and repositioning to achieve this result.  Not for the novice! 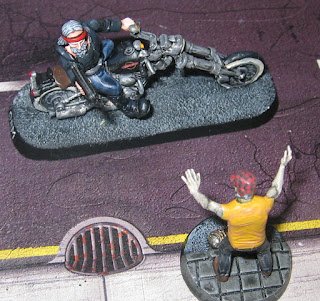 What happens next?  I think that Storm is attempting a drive by shooting and isn't prepared to take the chance that OMZ is really human.  As I've discussed above, I don't think his chances of hitting and killing the potential zombie are very good, but OMZ isn't going to catch the moving bike either.  However, the noises of the shooting and the motorcycle together are going to draw a lot of attention to this area.  Perhaps there are enough other zombies nearby to block the road and pull Storm off his machine?