It's been quite a while since I built and showed any terrain.  Indeed, I'm not a great terrain builder - I tend to prefer to paint figures - but it is necessary for when we play games!

Here's a small piece that I finished recently: 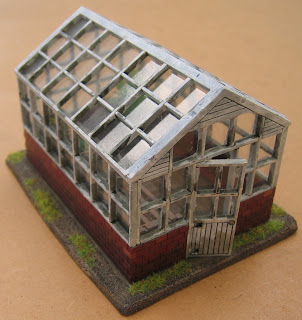 The greenhouse kit is produced by Blotz and comes with the outer shell and 2 full-length workbenches.  I've added glazing cut from clear plastic food packaging and a base made from a scrap of MDF. 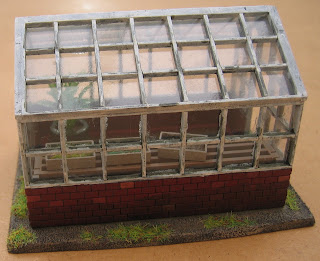 You can see some interior details through the windows.  As well as a single workbench (I felt it was too full if I used both benches from the kit), this greenhouse contains some seed trays and a large potted plant. 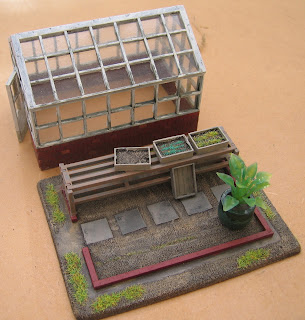 Since this is a model that I've built for wargames, the greenhouse does come off its base.  As well as allowing you a much better view of the inside, there is also space to place several figures. 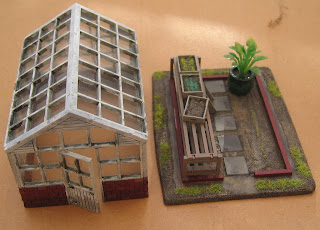 For the record, the seed trays are adapted from a Supreme Littleness shallow box, whilst the plant and the plant pot are cheap model railroad products from Chinese companies.

I'm pleased with the way this outbuilding has turned out, though I think it could do with a lot more clutter (sacks of compost, trowels or other tools, a watering can, stacks of unused flower pots and the like).  Of course, there is always a tension between realistic detail and suitability for use in games.  Too much detail and the model will be vulnerable to damage & will probably not have anywhere to place figures.  Too little detail and it won't engage the player's imaginations in the desired way.

No, the real problem here is that I cannot use this piece in isolation.  It cries out to be placed in a realistic setting.  For example, such a greenhouse might be found in the property of a serious amateur horticulturist or as part of a commercial market garden.  And I haven't thought that far ahead & don't have plans to build any of the necessary surroundings...
Posted by Colgar6 at 14:35