Some 6 months ago, I wrote an article about my acquisition of a couple of Revell EasyKit "Jedi Starfighters" that were in perfect scale for 28mm wargaming figures: here. At the time, I couldn't decide how to finish these kits, but that doesn't mean I haven't made any progress since!

I've built one of my own two models so far.  There were some modifications made to suit my needs, as described here: 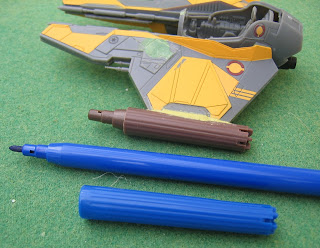 1. The "R2-D2" droid protruding from the port wing has been removed and the gap filled with green stuff.  This detail was too recognisable as coming from Star Wars...

2. I cut the wingtip panels from their "folded out" positions and glued them back into the recesses in the wings.  This left an abrupt end of detail on the very ends of the wings, so I've added some fluted cylinders instead.  These could be extra fuel tanks, engines or cannons; I really haven't decided and I'm not sure that I care!  As you can see from the picture above, these extra bits have been built from the cap and end of some expired felt tip pens.


3. I want my craft to be usable for land-based games, perhaps as decorations at a space port.  For a while, I wondered how I was going to scratch build a suitable undercarriage (probably skis rather than wheels).  Then it hit me: you won't even be able to see under the craft when it's placed on a table.

Instead of anything complex, I intend to use transparent pegs (cut down from spare posts for Games Workshop flying bases) just to lift the model off the dirt.  I can always claim that it's a grav effect of some kind rather than a physical undercarriage! 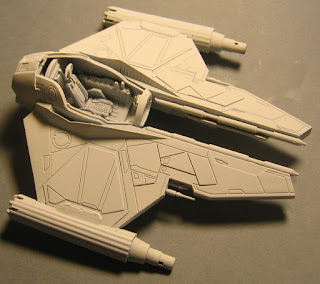 So far, this first tester model has been undercoated.  I used a white primer rather than my usual grey as I thought at first I might paint it up in Star Trek Federation colours (white with a red trim). Since then, I've changed my mind: I'll probably colour it dark green and use it as a Klingon machine instead.  Or maybe Federation white would be better after all?