I'm working on making some 28mm North African or Middle Eastern buildings.  Why?  Because they'll be useful for Pulp games - specifically, for the 3rd instalment of my Pulp Alley "Perilous Island" campaign.  Technically, the 3rd scenario as written is set in a large warehouse, but I figure that it will work just as well in amongst buildings.  I've never been afraid to change a scenario's setting before!

Before I get to the buildings themselves, I thought that I'd need some furnishings.  If they have playable interiors then I don't like my wargames buildings to be completely empty, though any furniture is strictly representational and will leave plenty of room for figures or other models.

Now I don't know a whole lot about North African buildings or their furnishings.  Nevertheless, it seemed to me that some tables would show that the places were inhabited.  They should be easy enough to make as well, right? 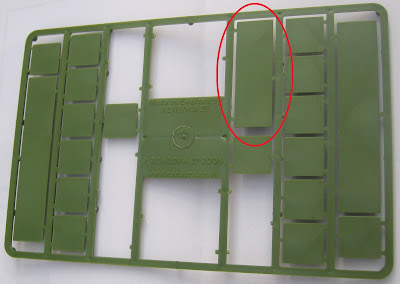 I started with the table tops.  Now I could have just cut out some rectangles of thick card or plastic.  Instead, I found some unused rectangular bases from Renedra.  These worked just fine; I took one of the longer bases and cut it into 2 pieces. 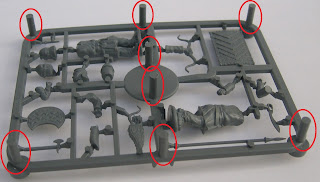 For legs, I raided an old sprue from a Wargames Factory kit.  These were designed with legs on one side and cups on the other, so that the sprues could be stacked with each other to make a block that was easily packaged (seemed like a neat idea to me).

Each of my sprues had eight cylindrical spacers of about 1cm in length; pretty good for a 28mm coffee table, though rather too short for a full-height table.

To make them a bit more interesting, I added some baskets and pots to the tables.  These metal items come from Steve Barber Models, from his "28mm Market" range.  Roughly speaking, one table has food on it (bread and fruit), whilst the other has drink (3 cups/goblets/small jugs and a larger vessel) 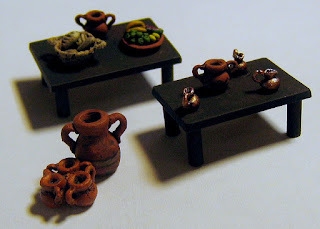 Finally, here's a (rather gloomy) picture of the finished items.  I've also included some larger pots that also came from Steve Barber Models.

These tables were easy to make and cheap.  I do wonder if they'll be enough, though - even if my goal is to have very sparsely-furnished buildings.