I like my wargames to be fought over something important.  It's not very interesting to play to inflict casualties on the enemy for the sake of it, or to gather more "plot points" than the opposition if these are in the abstract form of yellow tiddlywinks.  No, victory (or defeat) has to be tangible.

With that in mind, I've written articles about modelling plot points for my Pulp games on a couple of occasions previously:

Well, the collection continues to grow... 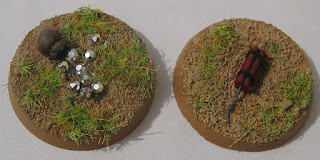 I think that I have described the pouch of diamonds before, but the dynamite is new.  It was formed from 7 identical lengths of plastic rod, glued into a bundle [and oddly that was much harder to build than it sounds; I had glue and lost pieces of rod all over the place].  Two thin strips of paper were wrapped round the bundle and I finished the model off with a thin piece of wire as a fuse.

The missionary's luggage is a commercial casting.  It comes with the "Lady Isabel Poppington" model from North Star, though obviously I have based it separately from her.

The pile of skulls also comes from North Star; if I remember correctly then it was part of the "Cannibal King" pack.

The crate of rifles is a bit more complex.  The crate itself is based on a small MDF/Greyboard kit [I cannot remember the manufacturer at the moment], but with a scratch built lid.  The rifles came from the Wargames Factory Zulus set.

Lastly, the enormous footprint was made very simply by pressing the foot of a toy dinosaur into Milliput.  Note that I mixed the putty and then left it for quite a while before making the print; I wanted the mixture to be malleable but have lost all its stickiness.

These plot points are intended for use in my Pulp games, which are roughly speaking based around Tarzan, The Lost World, King Solomon's Mines, King Kong and the like (so tropical wilderness).  But there's no reason why the concept shouldn't be used for any objective-driven game.  In fact, I should really build myself something similar for games of 7TV set in Star Trek, Captain Scarlet or similar "space opera" settings.  Hmm, ideas are forming...