Last week, I showed my first faction for Relic Knights: the Shattered Sword.  This week, I've got another small faction completed, so here are my Black Diamond mercenary corporation. 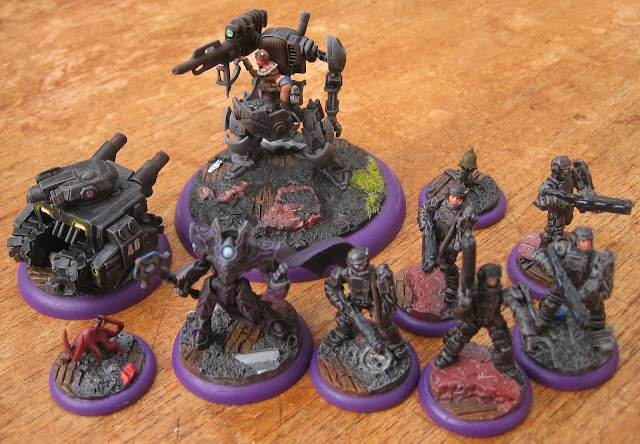 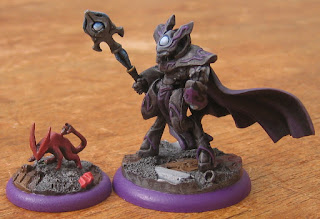 As with other factions, Black Diamond squads are led by a Questing Knight or a Relic Knight.  In this case, the leader is Leopold Magnus, a Questing Knight.  He's a cyborg of some type, considerably larger than a human and thoroughly evil.  Cross Darth Vader with The Terminator and you're somewhere close...

Leopold is accompanied by Static, his cypher (familiar).  This is a strange creature, a bit like a medium-sized dog with horns, but there's nothing remotely friendly about Static. 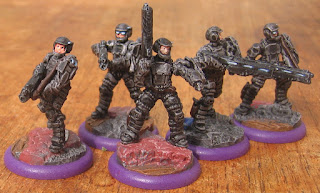 The foot soldiers for this faction are called Diamond Corps.  They're fairly ordinary human soldiers, armed and armoured in a style that is clearly derived from modern, real-world troops.  Consequently, there's not really much more that I can say about them.

Note that these models are not especially well-sculpted and they came to me second hand and already assembled (somewhat indifferently).  I've done what I can to rescue them, but they're not my favourite figures.  I believe these are 1st edition sculpts; the current Kickstarter 2nd edition versions are, by all accounts, vastly improved. 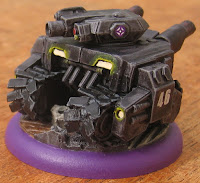 The M-8 is a small, robotic tank.  It's not clear whether it is completely autonomous, or if it is controlled remotely by a human operator (in the same manner as a modern drone).  Whilst clearly not designed for front line warfare, it is a powerful unit in a small skirmish. 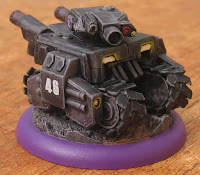 It has a quirky design that marks it out as a totally unique vehicle.  I rather like it...


One Shot and Fritz Even though she appears to be just a slip of a girl, One Shot is a Relic Knight.  That means that she has a cypher (the little mannequin, Fritz) and also a relic (a large, stompy robot).

As with the Shattered Sword, the large walker/robot took longer to paint than most models because of its greater size.  However, it wasn't nearly as time-consuming as I feared it might be.  I have to admit that I'm rather pleased with the end result! 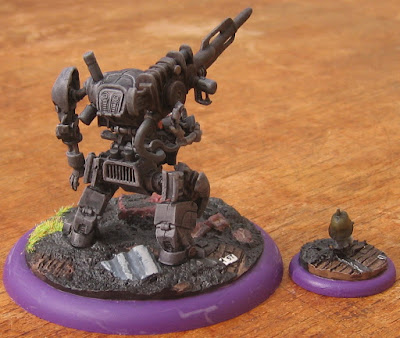 In this case, the walker/robot is armed with the largest sniper rifle anyone has ever seen.  Supposedly, in game terms, One Shot is an all-or-nothing model: most of the time she won't get to fire or will miss her target.  However, a single solid hit on a critical enemy model will be a game changer...

Once again, I've enjoyed painting these models (with the possible exception of the Diamond Corps: they were a bit of a chore).  I don't know how/when/if I'll ever use them, though I now have 2 completed forces for Relic Knights and therefore enough figures to play a game.  We'll see...