Fore several years, I've played an annual Halloween game.  Usually, this has involved witches and has been gamed with the marvellous "Song of Blades and Heroes" rules.  Here are some of our previous efforts:
So far, the record for the forces of darkness in these games has been poor.  I'd even go further and say that they have performed dismally!

This year I've made some changes to the attributes for both sides, but especially for the witches and their minions, hoping to make them a bit more cost-effective.  In particular, I've removed Flying from the witches and added a sorely-needed Leader instead.  Also I've toned the ghouls down a bit by removing the Savage attribute to make them a bit cheaper.  Can the evil-doers win a game?  Read on to find out... 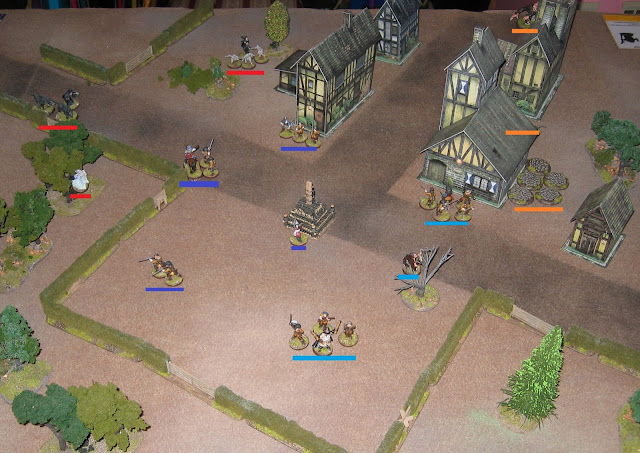 We decided to repeat the scenario that I created for The Flames of Justice: one witch has been captured and is about to be burned at the stake.  It's up to the other two sisters of the coven to rescue her before the Puritans can light the bonfire!

One adjustment was made to the setup rules for this scenario: we decided that any attackers with Swarm or Stealth attributes. or which was designated as a Ghost, could set up without being limited by proximity to a defender - as long as they were placed in or touching a piece of terrain.  This would represent them having infiltrated the town ahead of the battle and then appearing suddenly from under a hedgerow, through a wall or similar.

Forces were slightly larger than the previous time we played this game: each side had 2 commands.  There were 3 players; Steve took all the evil-doers and my son A. and I each took half of the humans.  Roughly speaking, these were the forces: 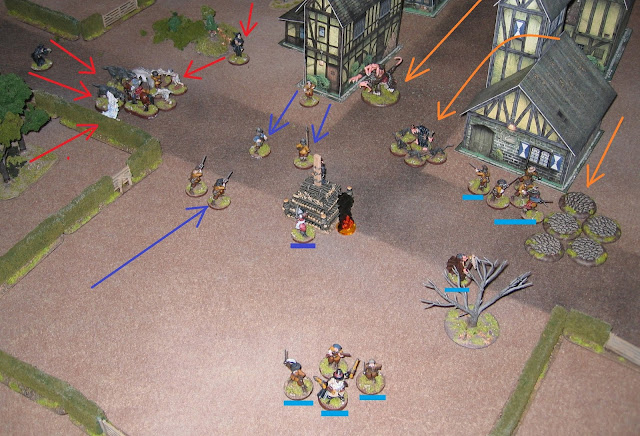 Fairly predictably, the combined forces of evil (witches and rats) advanced.  They were very successful with activation rolls and even managed to assault the nearest defenders.

In return, most of the men just stood around, bewildered at the sudden onslaught.  A notable exception to this: Sir Jasper, the magistrate, lit the pyre. 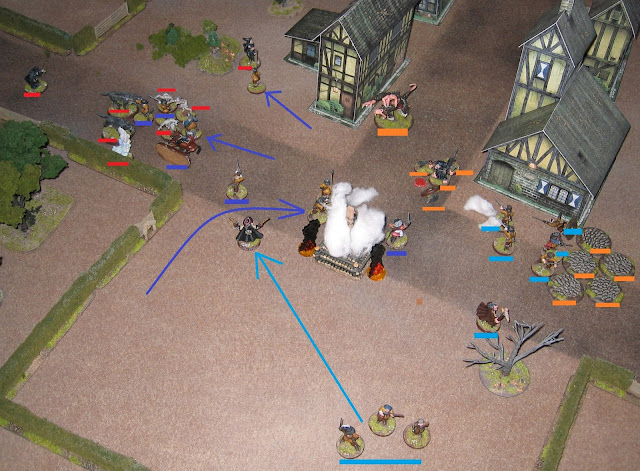 On turn two, most of the men again held their positions; their leaders were all engaged in combat and the ordinary foot soldiers weren't going to move without specific instructions, or so it seemed.

One dog-sized rat was shot by a musketeer (so, first blood to the humans!), but otherwise Colonel Brandon was hard pressed by a hell hound and a pack of ghouls.

In a most unlikely turn of events, the captive witch on the pyre caught fire and blazed brightly; within a moment she was consumed by the flames and killed!  [What?  That happened in our last game too!  On the first possible turn where the fire might injure the captive, we rolled a 6:1 split on the dice.
Fire doubles witch, so witch dies].

At this point, the men have technically won the game as the captive cannot be rescued alive.  We decided to play on anyway - and I made a mental note to revise the victory conditions for this scenario. 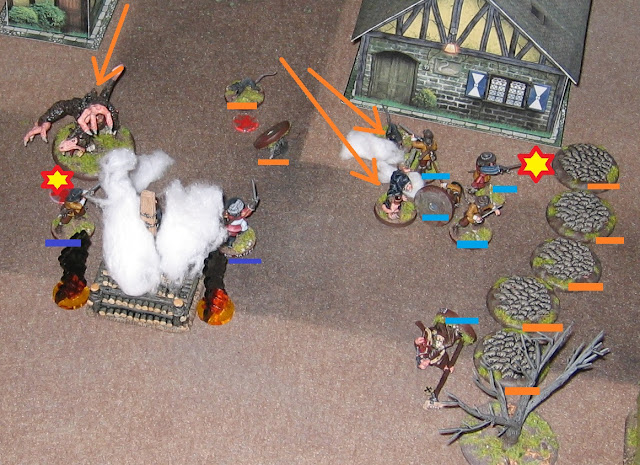 Before the soldiers could celebrate, a horrendous rat monster charged through the smoke, grabbed the nearest man and smashed him to the ground.  Major Fairfax and his immediate group were sandwiched between various rat swarms, giant rats and the black-robed rat priest.  One swordsman perished immediately; the rest of the band were forced to fight back-to-back against the seething horde of rodents. 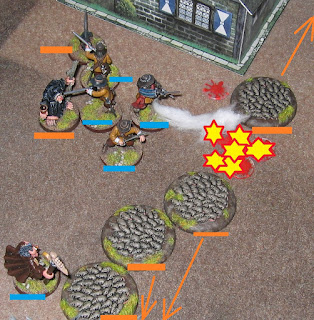 Their desperate plight was saved when Major Fairfax fired his pistol into the sea of grey bodies.  He must have loaded the weapon with some special ammunition in anticipation of such a foe, for he caused a gruesome kill on a section of the rat swarm, causing the rest of the rat tide to part like the red sea and scatter in several directions. 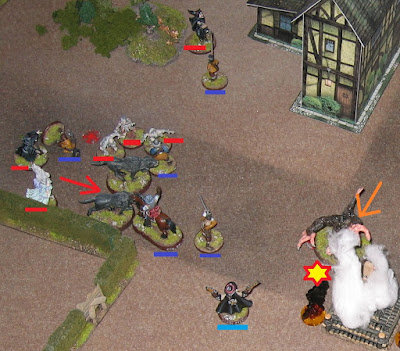 On the other side of the bonfire, the rat monster flattened the next man to stand in front of it.  Only John Sterne (the witch hunter) now stood in its way.

Colonel Brandon was harried backwards by hell hounds; only his skillful direction of his horse enabled him to stay in one piece.

His retreat was covered, in part at least, by Sergeant Stone.  The portly NCO held his ground as if rooted to the spot; neither the hell hounds nor the ghouls could move him or penetrate his armour and cause him injury. 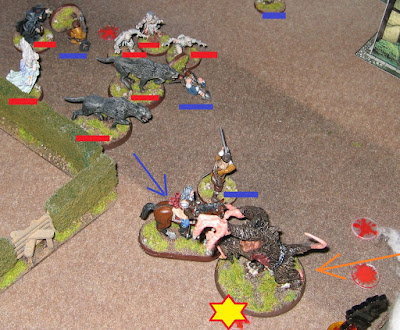 The rat monster tore through John Sterne as if he was of no more consequence than any of the other men.  In desperation, Colonel Brandon broke off from his fight with the hell hounds and faced the gigantic creature.  At least being mounted, he could strike at it without being disadvantaged by inferior height. 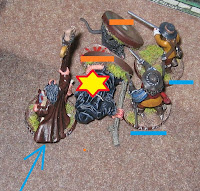 Taking advantage of the scattering of the rat swarms, Brother Matthew charged up to the plague priest, screaming some very unholy imprecations.  He swung his staff so hard that the rat-man's skull was shattered and its brains splashed over the cobbles [another gruesome kill, though not very many other rats were close enough to require a morale check]. 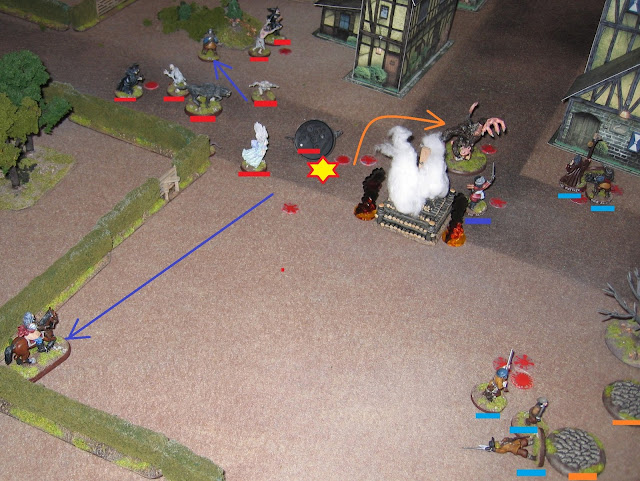 Colonel Brandon survived his initial encounter with the rat monster, but then decided to withdraw and seek reinforcements [the rat ogre killed another musketeer; this took the Colonel's force below half strength and he partially failed a morale check, as did Sergeant Stone].

The monster, perhaps confused by the smoke, didn't follow the Colonel.  Instead it moved around the other side of the pyre to seek fresh prey [it was still berserk and therefore had to attack the nearest enemy.  Although it could see Sir Jasper on the other side of the bonfire, it couldn't quite reach him - yet]. 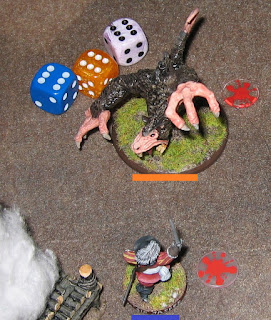 Elsewhere on the field, Major Fairfax's men were hunting down the rat swarms.  Although this wasn't entirely one-sided, they did manage to kill enough to reduce the rats to half strength.

No-one really cared about the resulting morale checks for the swarms, but everything swung on what would happen to the rat monster.  Of course, it rolled a triple '6'; the huge creature's blood lust was so fierce that it didn't even notice that it was almost all that remained of the rodent force!

In one desperate gamble, all the remaining men who could reach assaulted the monster at the same time.  They had basically one shot at this before the completely undamaged witches' force overran the centre of the village. 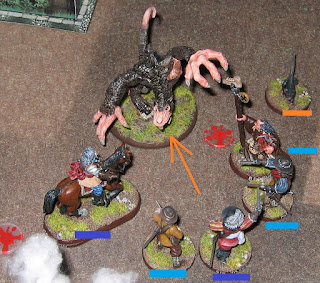 The dice were rolled, but it was only enough for a push-back - probably about the worst result possible for the men, since they hadn't (quite) managed to place figures to prevent the monster from retreating.  At least the defeat cost the rat ogre its berserk status... 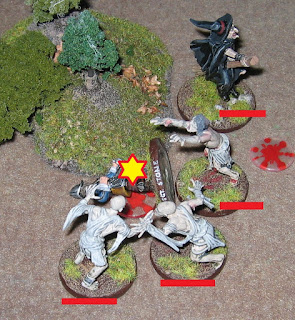 After this, it was all too obvious that the humans were doomed.  The valiant Sergeant Stone, who had done so much to hold up the dark forces to the west, was surrounded by ghouls and torn limb from limb.

Once the witches and their hell hounds attacked Colonel Brandon from behind, the game was effectively over.  Rather than fight it out to the bitter end, the defenders conceded and we went off to get some lunch.

Yikes - that rat monster is an unholy terror!  It has a combat score of 5, plus 2 for being berserk (at least until the first time it is defeated), plus another 1 against opponents who are smaller than it (i.e. just about everyone).  That means the only way to defeat it is to gang up on it, ideally with 5 or 6 men at once.  In this game, we weren't able to concentrate our forces in such a manner until too late - and even then it was too little.  Contrast with the last time that we used the rat force, where the monster was killed almost immediately!

The witches handled their force competently and didn't lose even a single model, but were stymied by the often sluggish behaviour of the hell hounds (this has happened in other games too; these beasts just don't seem very biddable) and by the heroic resistance of Sergeant Stone.  He may not have landed any blows of his own, but he just couldn't be killed or pushed out of the way for much of the game.  Also note that the ghost underperformed: it drifted about the battlefield but didn't do much other than moan softly!

Finally, the captive at the stake was burnt to death.  I'm going to have to revisit the victory conditions for this scenario, as an against-the-odds, technical win for the defenders in turn two just doesn't feel right!