I've had to plan ahead for this article, since it's school holiday time here and some of the family (including myself) are away from home.  So if this post appears on the second Sunday of October, 2017 then I'll have set up the schedule properly for my Zomtober entry.  Otherwise you won't see it until much later and I'll be annoyed with the technology...

This zombie/survivor duel is a bit of a departure for me.  Always in the past, I've presented modern, Western figures for my Zomtober articles.  However, just this once, I have a medieval setting instead. 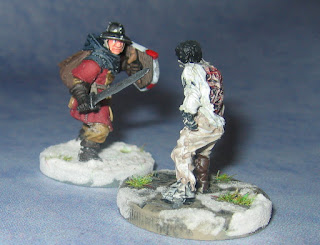 The story goes something like this: a lost traveller is battling his way through a snowstorm in an attempt to find shelter.  It's growing dark and the wind is howling; flurries of snow are swirling all around.  The man sees movement in his peripheral vision; is it just the wind howling or is it something more sinister?  He draws his sword hurriedly and calls out "Who goes there?" 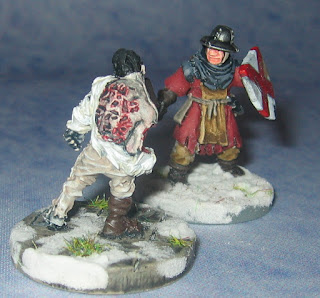 Both of these models are official figures for Frostgrave, in case you hadn't already guessed.  The swordsman is a plastic henchman; he's the first miniature that I have completed for my "red" warband.  The "blue" warband was finished quite some time ago and can be seen here: Blue Warband. 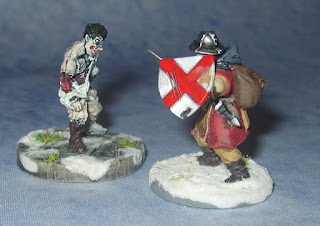 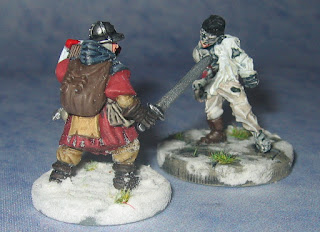 Personally, I like the swordsman a lot.  The Frostgrave plastic kits are very adaptable and can be built into some excellent models.
I'm less certain about the zombie; the figure isn't particularly well sculpted or cast.  It's acceptable, just not a really good model. 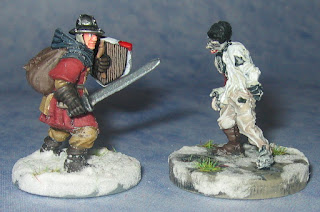 So, who will win this fight?  On the face of it, the swordsman should be able to chop the zombie into little chunks quite easily.  But what if he's cold and tired?  His sword might slip in his chilled fingers, or his boot fail to grip on a patch of ice.

Even if he wins this encounter, he might lose all sense of direction during the melee and end up wandering until he drops from exhaustion.  And what if the zombie isn't alone; there might be further horrors lurking in the snowstorm...