As part of my ongoing efforts to produce terrain for games of Pulp Alley and Congo, I decided that I need a small, coastal village or port.  Obviously that'll require an extensive water feature and some boats (such as the steam launch which was the subject of my last article) - but that isn't my immediate focus.  For now, a village just isn't going to work without some houses or huts... 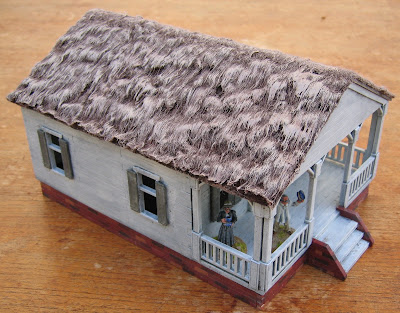 The first building is simple: it could be either the house for a missionary or a local trader.  This MDF kit comes from TTCombat, where it is sold as "Grey Harbor House A" for £10 (note the U.S. spelling of "Harbor", even though TTCombat is, I believe, a UK-based company).  It's a fairly basic MDF and greyboard kit of a planked, wooden house set on brick foundations.

I've scratch-built a thatched roof for the building; this seems more versatile than the kit's original roof for the relatively uncivilised parts of the world in which I'm likely to set games.  It's the first time that I've used teddy-bear fur in a model and I'm not sure I combed it out as well as I might.  One side is much flatter than the other; the fur fabric seems to have a "grain" or direction and I was combing against it on the near side you can see in the picture and with the grain on the far side.

As an aside, TTCombat also sells Grey Harbor "B" and "C" models which have a similar style but which are a bit larger (the "C" house has 2 storeys).  It would be entirely possible to build a complete settlement from just these types. 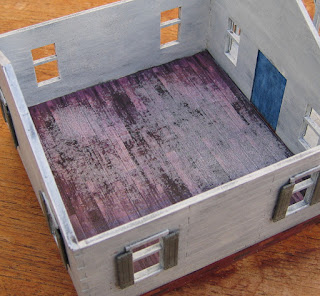 Now here's something of a mess.  I've tried twice to fit the interior of the building with a plank texture, printed once on paper and then (when that failed miserably) printed onto cardboard.  The glued-down result has been as you can see: wrinkled, shrunken and with extremely poor colour retention.

I really don't understand why this has been such a disaster (twice!), but I'll have to do something to remedy it; I cannot leave it as it is.  The floor of the model did have scribed planks, but I thought it would be awkward to paint these and I chose the printed paper route instead.  I'm wishing that I hadn't gone down this route now... 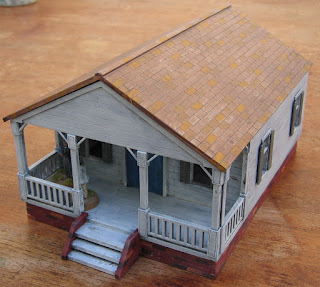 As sold, the model has a simple, MDF, tiled roof.  I painted this up as well; you can see it in the photo above.  This gives me the option of making the building more or less "civilised" to fit in with the setting for a particular game.  Indeed, the tiled roof could probably be used for games set in the present day for many of the warmer parts of the world. 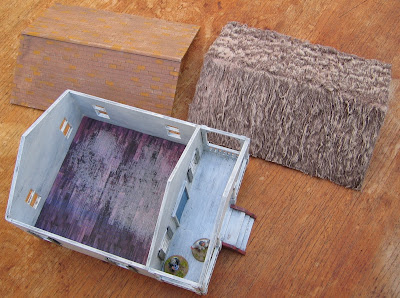 I'm sure that this will be a very useful building, especially with the choice of roofs, but it's not enough on its own!  And I'll need to fix the flooring; it's really awful...
Posted by Colgar6 at 16:45