This will be just a short post today, as I only have a few newly-completed models to show.  I'm working on quite a lot of things at the moment, but all the rest of these are only partly completed. 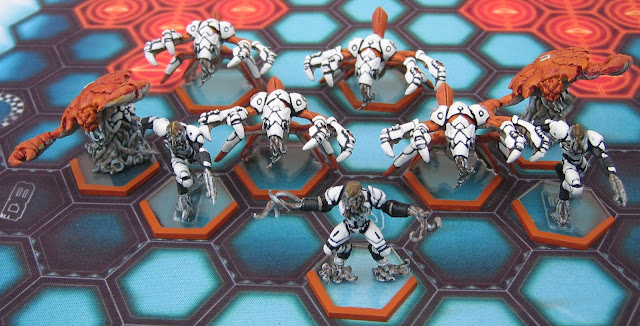 Dreadball has many teams made up from weird aliens, but few are as strange as the "nameless".  For starters, this is an alliance of 3 different alien races rather than just members from a single species, though each form has shared elements that hint at a common origin.  At least, one assumes that they are different races; it's just possible that these are different forms of the same species (for example, juveniles vs mature or male vs female).  That seems unlikely, though!

Whether this is one race or three doesn't really matter, though.  If you're facing them then they present a writhing mass of tentacles, shells and bulging eyes that will give most humanoid species nightmares!

Unusually, a nameless team has two types of guard.  Firstly there are the "sticky" Undulans.  These have long tentacles that can reach further than most players; once they've got you, it's hard to escape!

The good news (for their opponents) is that Undulans are not especially fast.  But they're probably fast enough to get you all the same...

The other type of nameless guard is the so-called "hard" guard, from the Feromite species.  Imagine a giant crab that has a mass of tentacles instead of legs and you won't be far wrong. 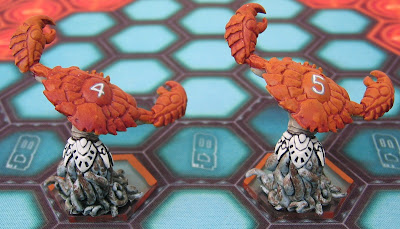 As you might expect from their appearance, Feromites are really tough.  However, the addition of armour around their midriffs suggests that this might be a vulnerable spot.  Good luck with that! 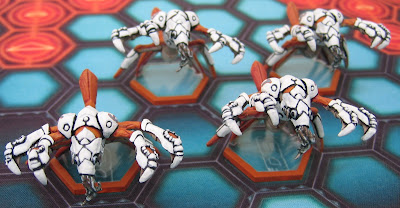 Nameless teams don't have any jacks, so their scoring attempts have to be made by strikers.  These guys ressemble a giant prawn to some extent, but there are too many legs and arms (?) for the similarities to be more than passing - and again with the tentacles! 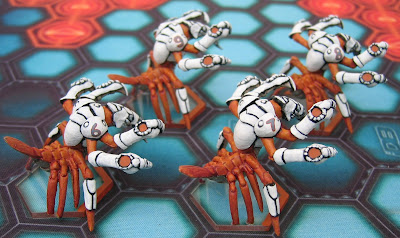 Despite their nightmarish appearance, nameless strikers are distinctly average on the pitch, though they can scuttle about quite quickly.

I decided quite early that I wanted to paint these models in colours similar to those of terran squid (for the soft body parts) and crabs (for the shells and claws).  Consequently, the tentacles are a pale blue and are covered with dark brown spots.  The shells are a greenish off-white on the underside and a vivid red/orange on top.

When it came to the armour, I could have chosen almost any solid colour.  However, I realised that none of my existing Dreadball teams wore white uniforms and so I decided to go for the "Star Wars stormtrooper" look.  I think it works quite well, but I'm interested in other people's opinions as well.

Incidentally, in a few cases it wasn't clear whether a bit of the model was artificial armour or was part of the animal's shell.  This is especially the case for the heads of the "prawns".  Obviously, I chose to interpret these head segments as added armour and painted the panels white, but I think it would have worked equally well the other way around.

So, another Dreadball team, ready for the pitch.  But what should I call them?  These models are sold as the "Kalimarin Ancients", but I'd prefer to have my own name.  What about the "Prawn Kings"?  Too cheesy?  Hmm, you come up with something better...
Posted by Colgar6 at 16:37