There's a new club in town: the Helensburgh Alternative Hobby Association (HAHA).  I'm very excited about this as it opens up the possibility of getting some regular gaming after a number of years without such a group nearby.  With that in mind, I attended the weekly meeting for my first time yesterday and took along Full Thrust; a couple of members had expressed interest in learning how to play.

So, here's a simple scenario for beginners: a Federation convoy is leaving a planetary system when it is pounced upon by Klingon raiders.  The Federation have some warships, but are outclassed by the attackers.  Will any of the merchantmen make it to the far end of the table, where they are deemed to have reached the hyper limit of the solar system and can escape by engaging their warp drives? 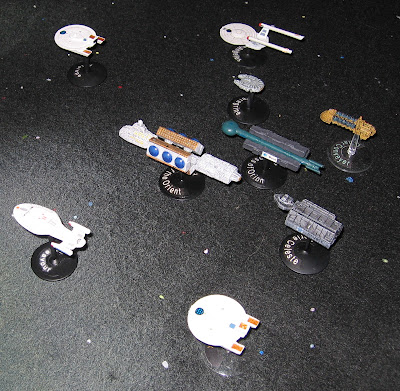 The defenders have the following resources:


For the warships, the decision is simple: do they stay with the freighters or advance to meet the Klingons? 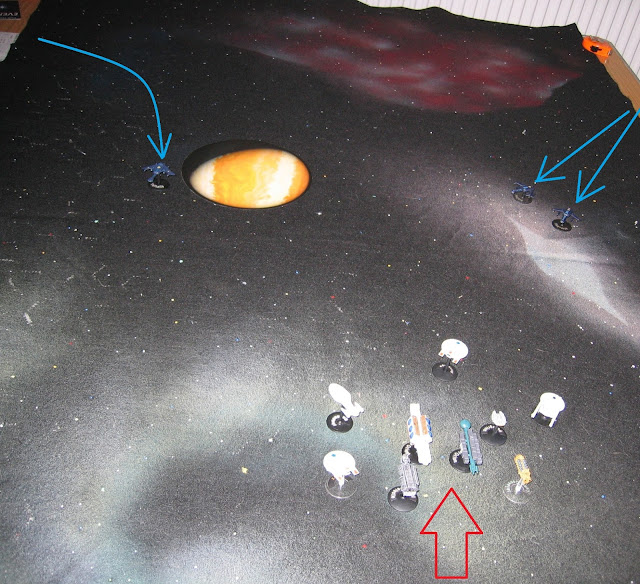 The Klingons have a very simple fleet:
They have exactly the opposite decision to the Federation.  Should they target the escorts first and remove them as a threat (but risk the convoy escaping in the meantime), or should they attack the freighters first (and perhaps the Federation warships will be able to fight back unopposed)? 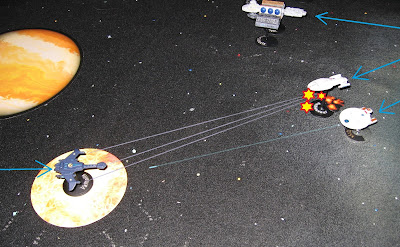 The convoy accelerated as hard as it could (which wasn't much; merchantmen are typically very sluggish!).  Their only real chance was to build up as much speed as they could and race past the raiders in as short a time as possible.  Even so, at least some of them weren't likely to make it...

Initially, the escorts kept station with the freighters, though when a Klingon warship appeared around the gas giant, Endeavour and Oryx peeled off to face it.

The IKS Valhalla fired everything it had at the light scout cruiser; Endeavour was raked from stem to stern and suffered a triple threshold check (for those readers who don't know Full Thrust, that's a very bad thing.  Each internal system only survives on a d6 roll of '1'!).  By the time the sparks had stopped flying, the only things still working on the Federation vessel were Life Support and the Warp Core.  Could be worse...

In return, the Oryx fired a stupendously accurate torpedo which hit the Valhalla square in the engine room.  This, together with damage accumulated from a long range torpedo the previous turn (Oryx again), caused a warp core breach on the Klingon ship.  Her damage control parties raced to contain the damage, but the reactor went super-critical before they could take any action and the heavy cruiser blew up rather spectacularly! 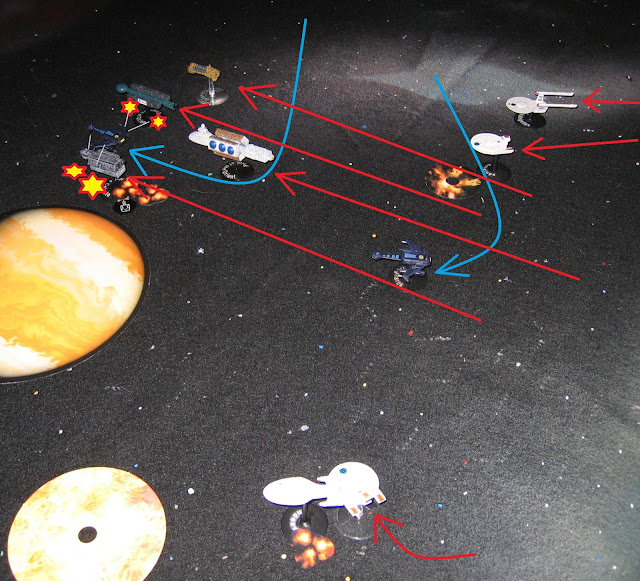 The other two Klingons were not so easily dispatched.  The Ragnarok curved in to a position behind the convoy, destroying the Lunar Conveyor as it passed.  The Asgard, however, manoeuvred perfectly into the very heart of the merchant fleet and began to fire at all the targets around her! 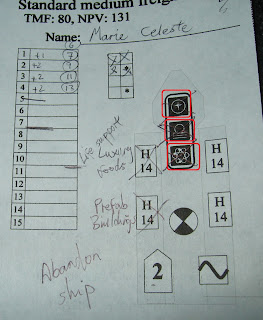 Asgard's left-hand beams did significant damage to the Marie Celeste, though not enough to be fatal.  At least, not ordinarily - for in a strange quirk of fate the freighter lost her Bridge, Life Support and Warp Core all from this one salvo (each requiring a roll of '6' to be damaged).  With the ship in such a bad way, the remaining crew decided to abandon ship.

Asgard also put some serious hurt onto the large freighter Empress of Orion, though this wasn't enough to stop the civilian ship. 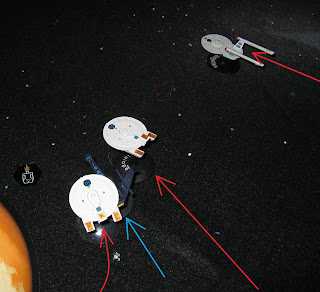 At the rear of the convoy, all three of the Federation warships (discounting the crippled Endeavour) converged on either flank of the Ragnarok... 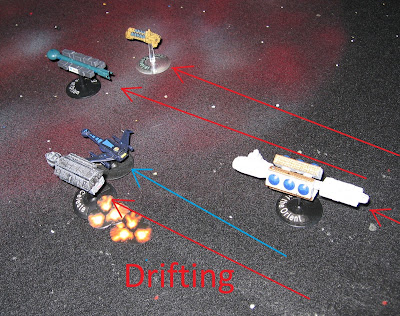 ...while at the same time, the Asgard just about kept pace with the fleeing merchantmen (the convoy was travelling rather faster than the cruiser at this point, but the difference wasn't enough to increase the range significantly.  Worryingly for the Klingon, the burning, drifting hulk of the Marie Celeste was still alongside the Asgard; the freighter could blow up at any moment!

In fact, if the Federation got lucky then both the remaining Klingon cruisers might be crippled or destroyed this turn! 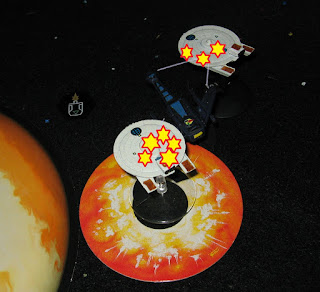 Fate works in strange ways.  The Klingons had the initiative and could therefore choose the first ship to fire.  They decided it would be the Ragnarok, as otherwise - surrounded as she was - she might not have a chance later on.

The Ragnarok split her fire between the two Federation destroyers.  At point-blank range, phasers chopped the Oryx apart.  In Full Thrust, a beam weapon that rolls a '6' to hit does damage (typically 2 points) and is then re-rolled.  The player just kept rolling '6's, one after the other, whilst the rest of us watched on, dumbfounded!  By the time the cascade came to an end, the poor Oryx had taken 15 points of damage; she was completely atomised.

Ragnarok then fired her other wing weapons at the Antelope.  Although the second Federation destroyer survived, she was reduced to a smoking wreck which was abandoned a turn or two later. 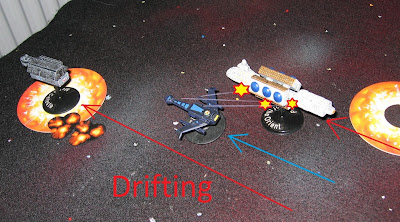 Asgard was equally lucky, at least from a Klingon point of view.  The Marie Celeste didn't blow up whilst adjacent to the cruiser, but instead drifted far enough away that the shock wave wouldn't be an issue - and then exploded.  Meanwhile, the Asgard had dispatched the Empress of Orion and was knocking chunks out of the large bulk carrier Pride of the Orient. 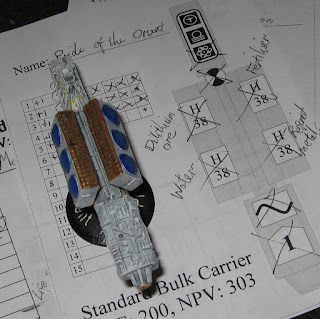 Bulk carriers are big and the attacker didn't manage to destroy the freighter before it crossed the edge of the table.  However, the Pride of the Orient wasn't in a good way; she had a lot of damage and (especially significant) a warp core breach.  She had a single damage control party (DCP) so the odds of them saving the ship were not great, but we diced it out anyway: 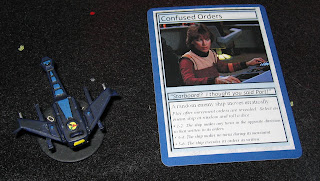 There were now just two Klingon heavy cruisers on the table (although the Ragnarok had accumulated quite a lot of damage over the course of the game and now had a lot of weapons knocked out) and only one Federation light cruiser.  That's discounting the crippled Endeavour, which was creeping away quietly on the other side of the planet.

We were playing with my Full Thrust Event Cards, though not much use had been made of them up till this point.  The Federation player belatedly tried a Confused Orders card on the Klingons; if the two big cruisers could be prevented from ganging up on the Los Angeles then she might just have a chance of taking out the more damaged Ragnarok.  It wasn't to be though; the enemy helmsman wasn't fooled for a moment.

In the dying moments of the game, the plucky Los Angeles came face to face with the almost untouched IKS Asgard at very close range.  This time, the Federation had the initiative; Los Angeles' strike was lucky enough to disable most of Asgard's weapons.  She survived the return fire from the enraged pair of Klingon vessels and fled into hyperspace (though not before taking a non-critical hit: her supplies locker was destroyed, flooding decks 2 and 3 with ankle-deep grey paint).

As expected, this was a bloodbath!  The convoy is basically there so that players can get the hang of the Full Thrust orders and movement system - which the Klingon commander seemed to do extremely efficiently.  It certainly helped that my Klingon cruiser designs are very maneuverable and have good, all-round firepower.  Once the Asgard was within the convoy and unopposed, she could just sit there and shoot in all directions.

Oddly, there seemed to be a lot of "extreme" dice rolls.  The Klingon player in particular was afflicted by this; sometimes a full cruiser salvo would produce virtually no hits and sometimes a penetrating hit would explode into a massive cascade.  Still, the Federation had their piece of luck as well: the destroyer Oryx taking out a heavy cruiser (Valhalla) with 2 turns of torpedo and beam damage was stupendous!

We didn't really quantify any victory conditions.  It was stated that "some" of the freighters had to escape, but not how many, or indeed if different levels of victory would apply for different numbers of craft saved.  Both the warship commanders (and me, as umpire & convoy captain) enjoyed the game, so who won?  Does it even matter?  What do you think?
Posted by Colgar6 at 23:05