Last Thursday, my son A. and I went along to the Helensburgh games club (HAHA) again.  I had arranged to play an introductory game of SAGA with another club member.  In the event, my son played the game and I acted as umpire, dispensing advice and rules knowledge with complete impartiality.

We were still playing SAGA version 1, though this may well be the last such game before I upgrade to v.2 .  I set up "The River" scenario from the original rule book: this has an impassable stream with 2 crossing places.  The winner is whoever has more of his force on the opposite side after 7 turns.  Simple enough! 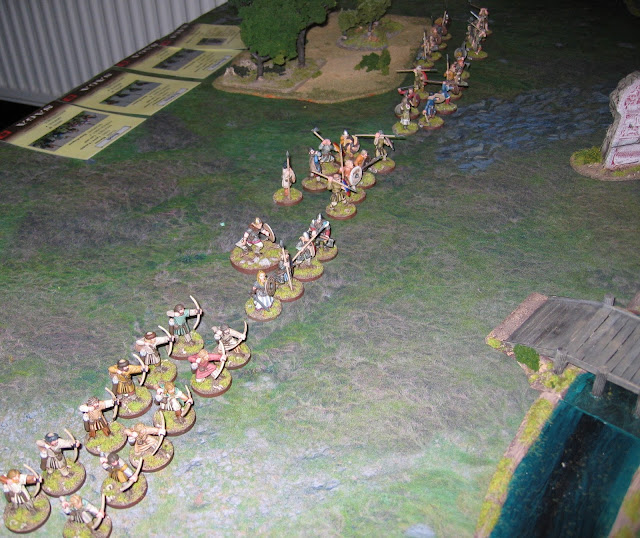 A. took control of a Viking warband, comprised of the following:


Facing the Vikings was a similarly-sized formation of Scots:


Note that we were not playing with any advanced rules for this game, so the Scots banner-waving hearthguard was counted as just a regular hearthguard.  Mind you, A. nominated the banner as a self-proclaimed objective.  I forget his exact words, but the sentiment was very much along the lines of "I'm going to capture that!" 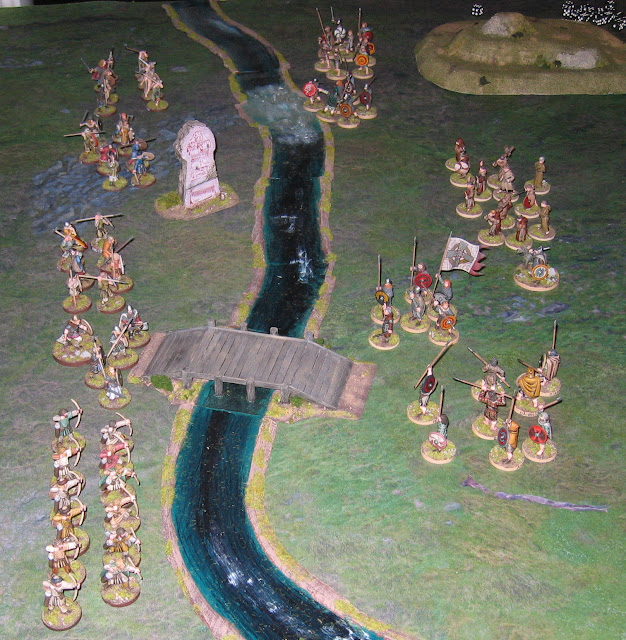 For the first turn or two, both warlords used pretty much all of their SAGA dice to advance their bands.  At this stage, they were trying to maintain some semblance of order (and didn't want to leave anyone behind!); nothing fancy happened.

Macbheatha stayed in the middle (i.e. between the ford and the bridge) with his angry monks acting as a spiritual reserve (generating an extra SAGA dice by being near to the seat of power!)

Leif encouraged his Vikings to cross the bridge, though he was conspicuously not in the front rank. 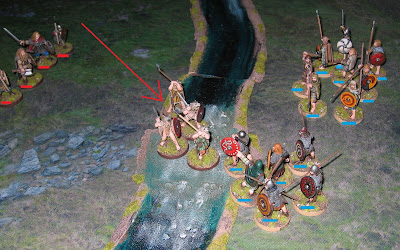 First contact occurred soon enough, of course.  Scots thanes had barely set foot in the ford when a bunch of yelling, semi-naked madmen ran at them from the Viking lines. 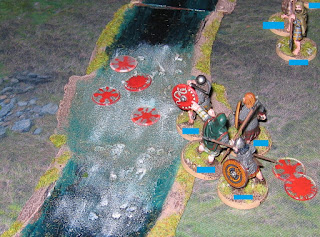 The berserkers stumbled, though.  Even though they threw a significantly larger number of dice than the defenders, they couldn't penetrate the Scots's armour and only 2 of the thanes fell.  In return, all 4 of the frothing loonies were cut down.  Someone's been eating their haggis this morning! 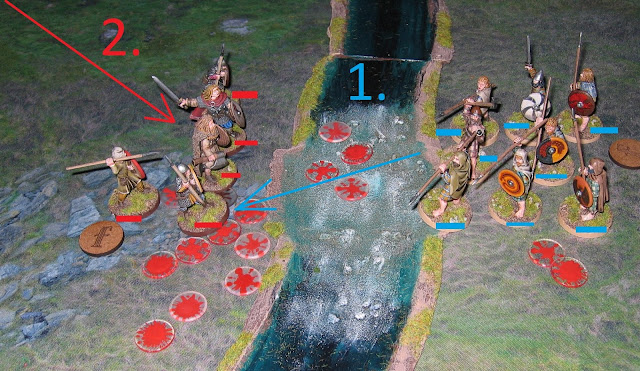 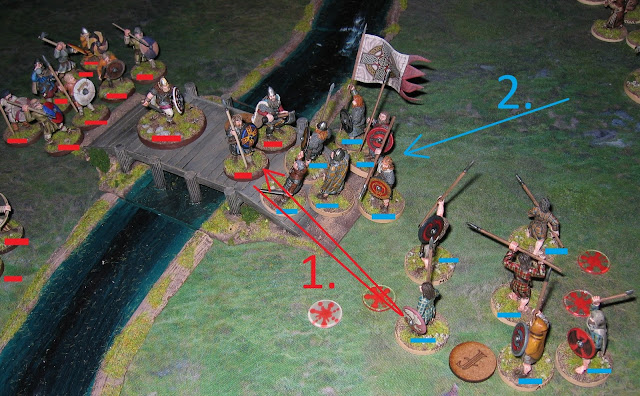 At the bridge, an initial Viking rush was met by a wall of Scots warriors and repulsed.  The Scots thanes (with banner) then counter-attacked the retreating raiders and slew them. 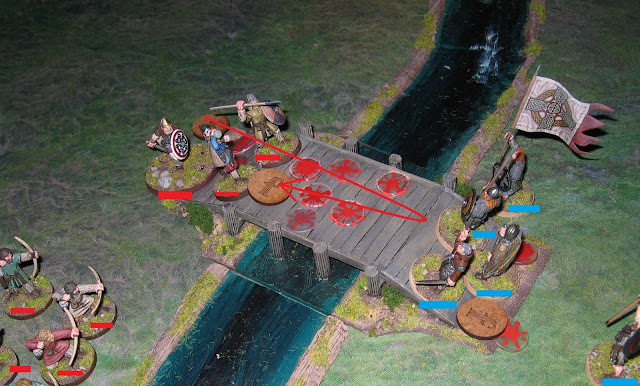 Another wave of Viking warriors charged forwards, but again the Scots thanes held their ground and sent the attackers reeling with heavy losses.  Mind you, the Scots were not without loss themselves. 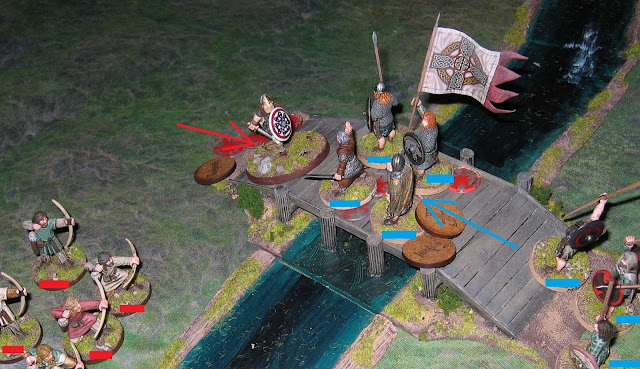 Continuing to advance, the Scots thanes finished off the last warriors in front of them.  They were tiring now, but only warlord Leif himself stood in their way (the levy archers don't really count; they were not very useful all through the game). 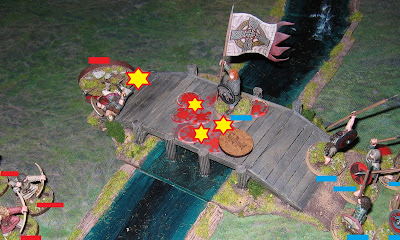 Leif cut down one thane, then a second and finally a third!  However, the fourth and final thane was just too much for him; the Viking warlord fell and there was nothing left to prevent the Scots from following their banner and streaming over the bridge (again, the levies don't really count as they had all the stopping power of wet tissue paper). 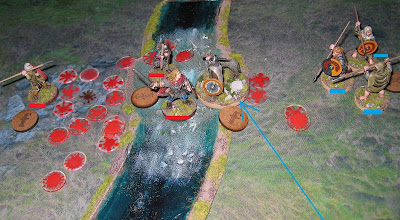 Back at the ford, the Viking hirdmen were forging forwards.  They entered the river and pushed back the Scots spearmen, but it was too little, too late.  Macbheatha shoved past his crowd of holy men and ran towards the norsemen.  Even though both sides were fatigued, the Scots lord had no difficulty in cutting down the two remaining hirdmen.

That left just a solitary Viking warrior (plus their levy archers) on the west bank of the stream. 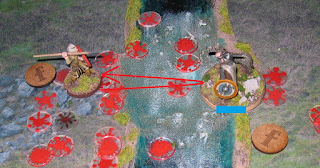 With a cry of "Valhalla!", this likely lad charged Macbheatha.  There was no realistic chance that he could injure the experienced and armoured warlord, but the audacity of his attack must have caught the Scot unawares.  The Viking's spear thrust bounced off the Scot's shield without any attempt at a return stroke.  Honour satisfied, Sigvald ran off into the dusk.

Although technically we had 2 more turns to play, we decided to halt the game at this point.  It should be fairly obvious to anyone who has followed the story that the Scots had won a significant, if bloody, victory; there was nothing to stop them from advancing the remnants of at least 2 units over each of the ford and the bridge.  The lone Viking warrior would have been cut down easily by a counterattack and although the levy  archers might possibly have inflicted a casualty or two in melee, they didn't generate any SAGA dice and so they they would have been easy prey, unable to activate to move, shoot or rest.

It is true that the Vikings had some poor luck in the first two turns of the game (they didn't roll even one 'rare' face on any SAGA die and their combat rolls were less than stellar).  Neither side made a lot of use of their battle-board's SAGA abilities, which isn't really surprising considering that both players were relative or complete beginners.  Still, as far as I can tell, both players enjoyed the game - and that's the main thing.

As you can see from the casualty markers, the river ran red that day!