7TV2: Eternia Base and the Daleks

To my everlasting regret, I've only played 7TV once before (here), though I've played its precursor - the Doctor Who Miniatures Game (DWMG) several times.

The one previous game of 7TV was fun, but it wasn't a total success for two reasons.  Firstly the forces were too small for the table (or if you prefer, the table was too large for the number of figures) and secondly the objectives were too easy to collect very early on (and that took away much of the point of playing the remainder of the game).

Last Thursday, I decided to revisit the game at the Helensburgh games club, but with some adjustments which would hopefully improve the experience. 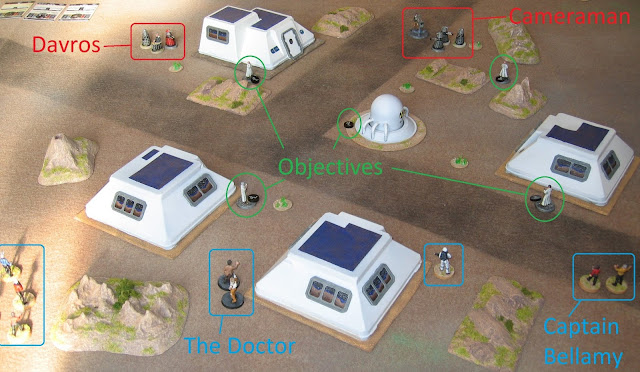 Somewhere in Federation space, on a remote and otherwise uninhabited planet is a top-secret research establishment called "Eternia Base".  There, scientists are conducting dangerous experiments to establish the nature of anti-photons.

A cross-dimensional rift caused by these tests has allowed universes to collide; Davros and a group of xenocidal Daleks have been sucked through.  They would like to take the secret knowledge of Eternia Base for themselves.

However, all is not lost.  Another dimensional traveller (who calls himself "the Doctor") and his assistant have persuaded the nearby starship USS Matakishi to intervene.  Captain Bellamy is leading an away team to try to rescue the scientists and save the base.

This would be a regular 7TV2 battle with 60 ratings per side.  The only alterations that we made to the standard rules were concerning objectives: 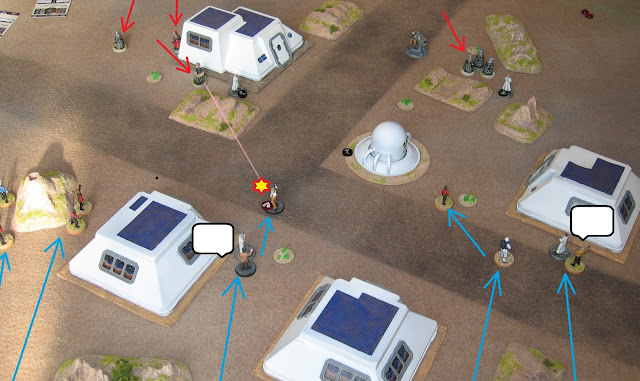 At the beginning, the Federation advanced as quickly as they could.  Both the Doctor and Captain Bellamy manage to talk to a scientist and convince them that safety lay in joining the good guys.

In contrast, the Daleks were afflicted by a nasty Countdown Card which effectively restricted them to half speed for a turn.  Since they weren't exactly fast movers to start with, their progress was distinctly sluggish!

Davros took out some of his frustrations by shooting and injuring Brook Aria, the Doctor's plucky assistant. 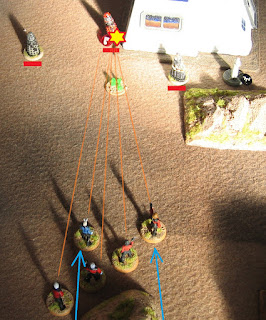 In their second turn, the Federation advance continued.  The Doctor ran up to the plasmatron, though he didn't have an action left with which to try to defuse it.  Also, the redshirt squad advanced, firing for all they were worth and actually hit one of the Daleks.  [They were shooting at Davros, but he has a 'Sacrifice' special effect which can redirect hits to a nearby friend].  Sadly for them, each Dalek can take 3 hits before succumbing and even worse, this was one of only two times in the entire game where a redshirt hit anything!

However, this single hit did change the results of the game, as you will see... 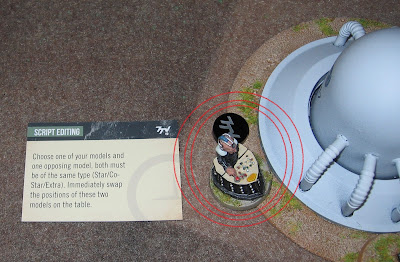 In one of those "I did not see that coming!" moments, the Daleks then drew a Script Editing countdown card.  There was a weird continuity error as Davros was suddenly next to the plasmatron (and was immediately able to set the device to overload before scuttling back to his own lines)... 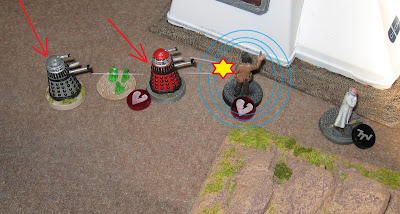 ...whilst the Doctor found himself in the midst of a bunch of angry Daleks, who proceeded to zap him.  It took all the plot points they had for the Federation side to keep him alive, though injured (and then there was some luck involved as well)! 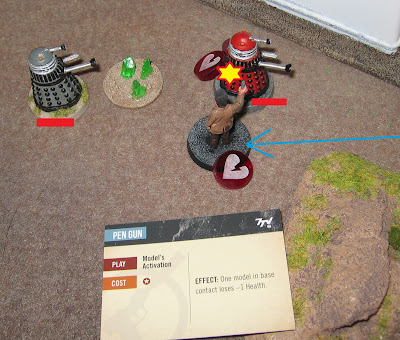 Never underestimate the Doctor!  On his next turn, he ran up to the red Dalek and did something with his sonic screwdriver, thus adding another wound to the battle machine [he used a "Pen Gun" gadget, but I imagine this was just a setting on his normal device rather than a separate piece of kit]. 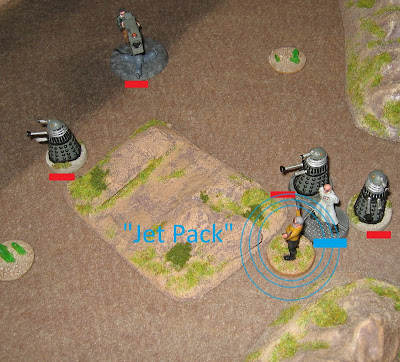 On the other side of the base, two grey Daleks had tried - and failed - to claim the 3rd scientist/objective.  In a moment of sheer coolness (or perhaps utter madness!), Captain Bellamy transported in and rescued the terrified scientist from under their blasters [in game terms, these Daleks were hit with a Countdown Card which prevented them from activating for a turn and then Captain Bellamy used a "jet pack" gadget to move up for free before claiming the objective and scarpering]! 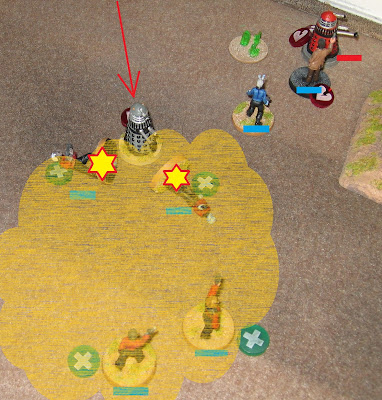 The Federation wasn't the only side to have gadgets, of course.  One of the Daleks produced a noxious cloud [nerve gas canister] that sent most of the redshirts coughing and reeling; it then exterminated a couple of the hapless humanoids. 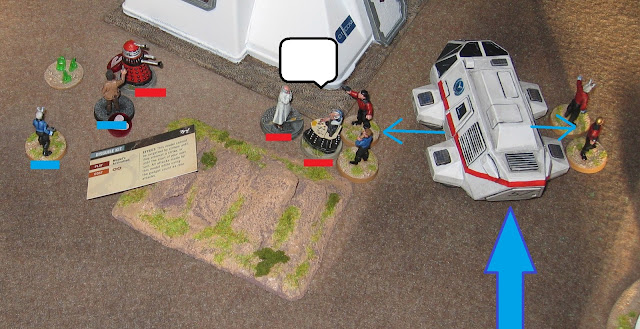 Things started to get a bit hectic at this point: 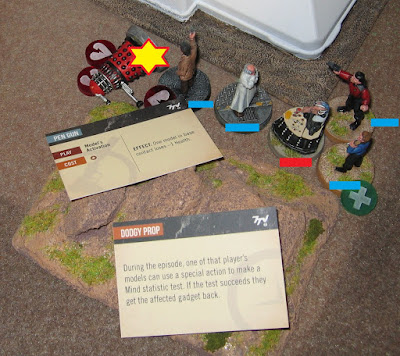 The other two redcoats brawled with Davros, but had no effect whatsoever [honestly, they'd have done better to stand back and shoot him - though even that probably wouldn't have achieved much].  Fortunately for the heroic side, the Doctor was having a much better turn:
So at this point, all four scientist objectives had been claimed by the Federation/heroic side - though the Daleks had set the plasmatron into irreversible meltdown. 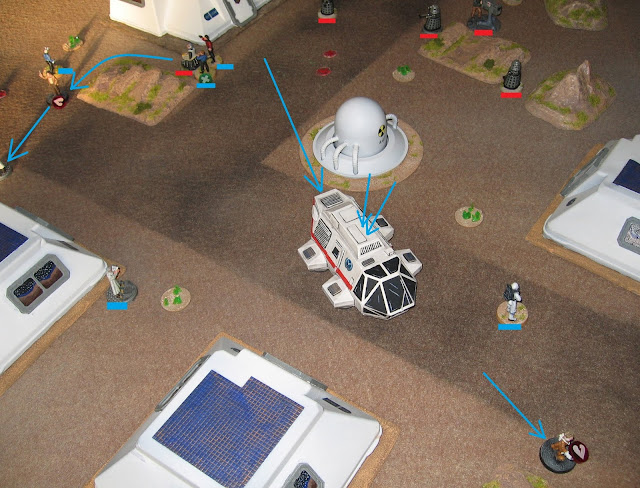 Right, time to leave!  The Doctor and his new scientist ally ran from the enraged Davros, whilst the shuttle relocated to the centre of the table to pick up Captain Bellamy, his scientist and a stray redshirt. 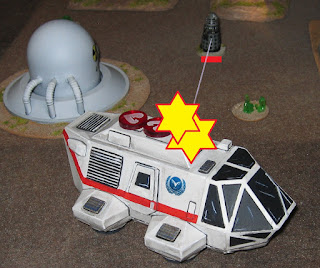 The evil side wasn't going to take this lying down.  Only one grey Dalek was in range of the shuttle, but it hit the craft squarely and inflicted heavy damage [i.e. 2 of the shuttle's 3 damage points were gone].  However, if that was the worst they could do then it looked as if the heroes might escape after all... 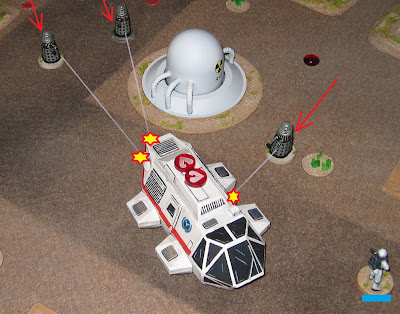 ...but the Daleks chose this moment to Steal the Scene and take a double turn.  All the Daleks that were at all close converged on the shuttle; it was rocked as bolt after bolt hit it.  The Federation side was all out of plot points and so there was nothing they could do except hold on and hope for the best.

Amazingly, the shuttle's armour [shields?] held.  It made every single saving throw needed and then flew off into the sunset with its precious cargo!

The Daleks' fury was intense!  They spent the last turn or two shooting down anything that moved. 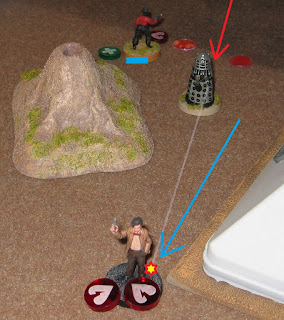 I had spent all my remaining plot points trying to save the last fleeing scientist, forgetting that the Doctor was also threatened.  A single hit would knock him out easily, but this time the rolls went against the Daleks and the Doctor survived & escaped.

At this point, the Countdown Cards ran out and the game ended.  Whew!

At the end of the game, after the Daleks' last minute shooting spree, the Federation cast was axed.  The Doctor, Brook Aria and one scientist had escaped on foot, Captain Bellamy, a redshirt and a second scientist had escaped in the shuttle and another two redshirts were still on the table - but all the rest were dead.  +1VP to the Daleks for axing the opposition.

Hmm, Davros set the plasmatron objective to overload: +1VP to the Daleks.

So far, that's a tie at 2VP each.  However, we need to add in the points for cast members killed.  Nothing for extras (for which the Federation were extremely grateful), but +3VP to the Federation for destroying an enemy co-star (the red Dalek).

The final tally:
So, who'd have thought it?  The Federation won; even though virtually all their shots had no effect at all, the destruction of the red dalek was the key!

Well, that was a thrilling game and no mistake!  There were so many moments where it could have turned - Davros swapping places with the Doctor was a masterstroke, the Doctor seemed like a goner in the midst of his enemies but somehow survived, the Daleks were all but invincible, the shuttle's escape under fire was very cinematic...and so on.

Both players enjoyed the game tremendously.  A number of other attendees at the games club wandered by during the evening to try to figure out what was going (there were mutterings such as "there are Daleks - but that looks like Star Trek?!", though nobody actually asked).  From this, I anticipate that there's plenty of latent interest in 7TV - even if many of the club members don't yet realise it 😃.