Another Thursday, another night at the Helensburgh games club.  This time, it's Pulp Alley again, with a 4-player game set amidst the ancient ruins of a Carthaginian or Greek colony in Mediterranean North Africa.  We had 2 of the same players as the last game which involved these leagues; the other 2 players were new to Pulp Alley. 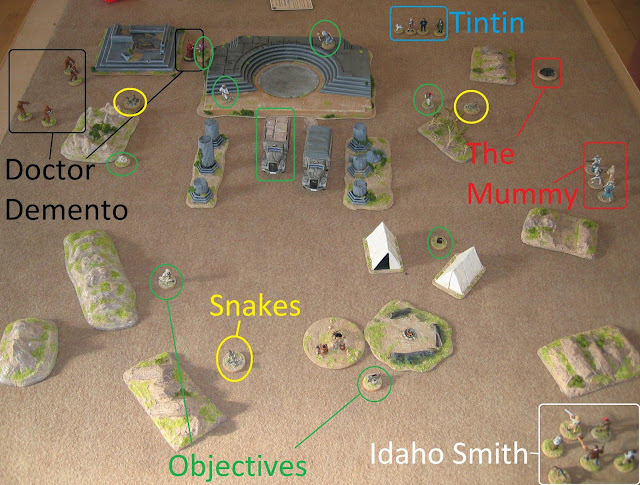 In the remote, ruined town of Hadrumetum, someone has been conducting unauthorised excavations.  According to local reports, this was a large, well-organised group - possibly from somewhere in central Europe.  Rumours suggest that they weren't interested in the archaeology but were instead looking for something very specific, though no-one knows what was their target.

It appears that the foreigners have left their camp temporarily; no-one knows why.  This would be a good time to descend upon it and find out what's happening!

The table is set up as follows:

The semi-deserted site and its mysteries have attracted the attention of four leagues: 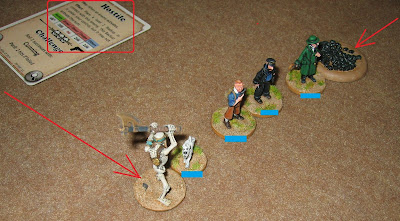 Before Tintin could even move, his followers were beset by horrors!  A skeletal warrior clawed its way up from the sands to attack Snowy [courtesy of a hostile Fate card], whilst a scarab swarm scuttled towards Professor Calculus. 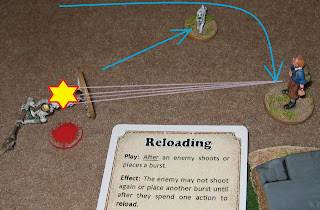 Snowy dodged his boney attacker easily enough, then Tintin emptied an entire clip of bullets into it to destroy it for good. 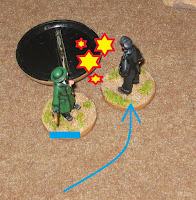 On the other side, Captain Haddock ran to the rescue of Professor Calculus.  He stomped all over the beetle swarm, dispersing it temporarily.

These actions didn't injure any of TinTin's followers, but they did delay them considerably.  It looks as if someone was trying to interfere with their plans! 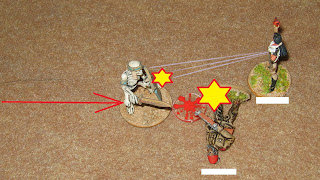 In another opening skirmish, a Tomb Guardian charged and felled Kerem, but was then shot down by Marion Allen. 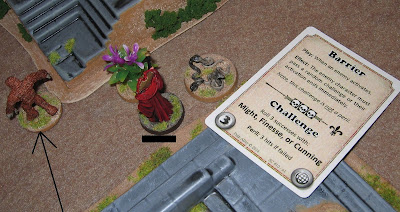 Elsewhere, Doctor Demento wasn't even slightly bothered by the approaching snakes.  Kicking the nearest serpent out of the way, he collected the purple orchid with ease. 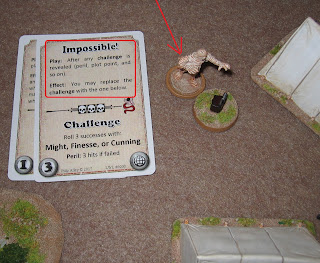 Not so the Mummy!  The undead lord approached the camp radio, but he just couldn't figure it out.  Hardly surprising, really: they don't have such things where he comes from... 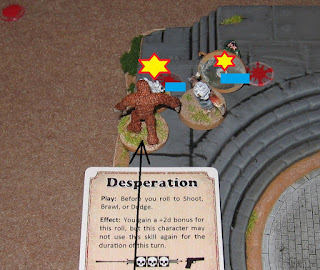 Things were still not going well for Tintin's followers.  Professor Calculus approached an Arab digger, but the rough workman knocked him down [the Professor failed a peril when attempting this plot point].

Snowy ran up to help, but was subjected to a desperate, flailing charge by a Zorgl.  The little dog didn't jump out of the way quickly enough and took a nasty buffet to the side of the head. 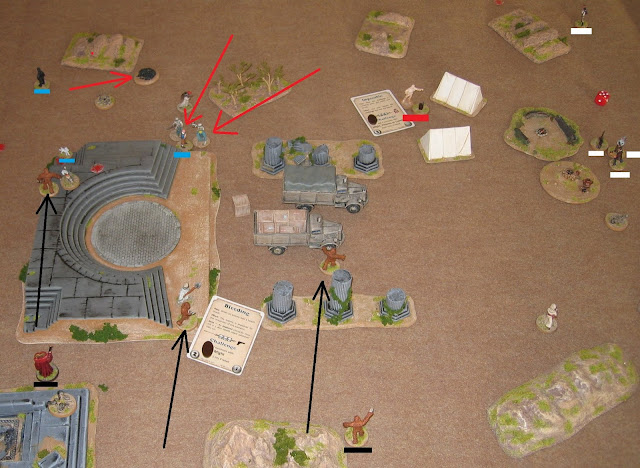 After a couple of turns, this is how things stood: 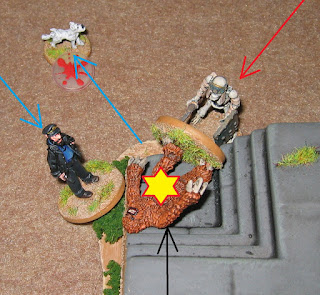 The Zorgl continued to chase Snowy, but this time the little dog evaded the clutches of the hairy monster.  It was then attacked and knocked down by an unlikely alliance of Captain Haddock attacking it from one side and a Tomb Guardian on the other.  However, the Zorgls in our games have an incredible reputation for passing health checks for recovery; the creature just stood up again. 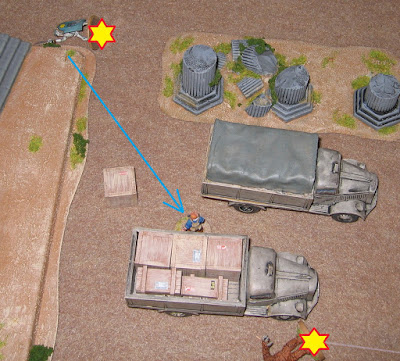 Tintin evaded the other Tomb Guardian and ran towards the truck.  As he did so, he heard the crack of a rifle - but the shot wasn't aimed at him.  Instead, it bowled over the Zorgl who was on the other side of the vehicle [I told you that Lady Constance was a fine shot... 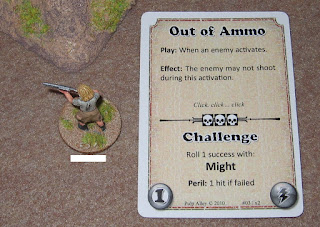 ...and that was her last bullet.  Things were looking up!] 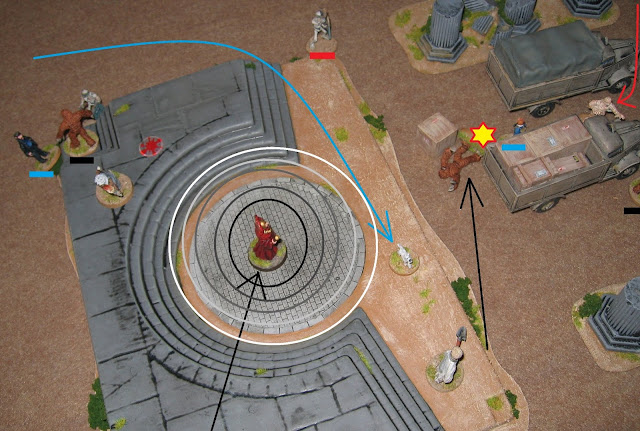 Tintin's optimism was short-lived, though: 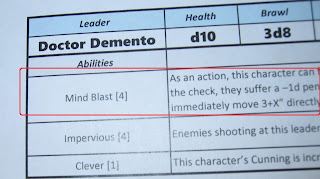 Indeed, Doctor Demento spent pretty much the entire second half of the game amusing himself in this manner; standing in the same spot and issuing blast after blast to discomfort all those within the central area.  There were usually at least one or two enemies each turn who just couldn't take the pressure in their brains, though the repeated blasts of psychic energy were probably an irritant rather than a game-changing tactic. 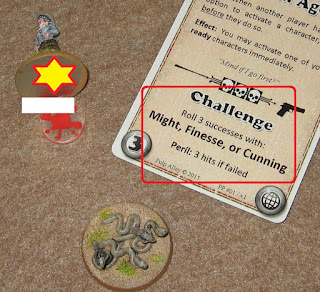 Idaho Smith and his group had finally plucked up courage to pass by the campsite snakes.  However, Mother wasn't careful enough; she was bitten by a particularly aggressive asp and collapsed immediately [a "3 successes or take 3 hits" peril is almost impossible for a mere follower to pass; she was very unlucky to draw this]. 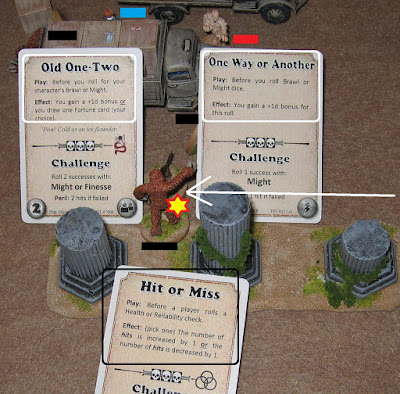 Once past the snakes, Indiana charged the nearest enemy.  This happened to be one of the (many!) Zorgls who were clustered around the truck.  The wily dog showed several moves [Old One-Two, One Way or Another] before sinking his teeth into the hairy monster's leg - only to find that his best bite had no effect after all [Hit or Miss]! 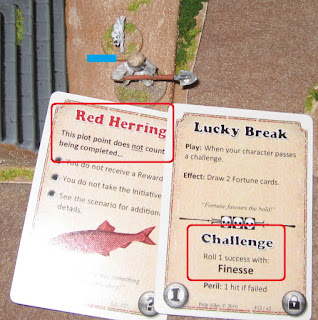 Finally, one of Tintin's group attempted a plot point!  Snowy grabbed at the hem of an Arab digger's rode - only to find that the "digger" was just a dummy, a crudely-made scarecrow.  Strange... 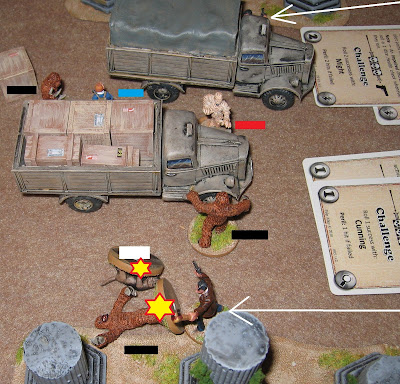 After his initial rush, Indiana was unable to keep up the momentum.  He was knocked down by the Zorgl, but Idaho Smith raced in to help his beloved dog and flattened the Zorgl in return.

Meanwhile, the nearest other Zorgl had recovered from its bullet wound and was trying again to get into the truck's cab.

At the back, Marion Allen had decided to start up the other, unladen truck in the hope of ramming & disabling the laden one in case anyone else looked like they were going to drive it away.  It was a good plan, but the door to this second vehicle seemed to be a bit stiff... 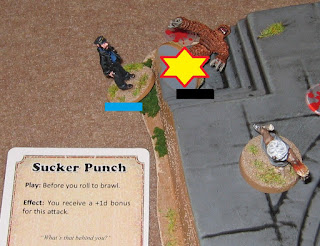 In a desperate attempt to talk to one of the last unclaimed Arab diggers, Captain Haddock sucker-punched the Zorgl who stood in his way, before playing a "Stay Down" card to prevent it from recovering immediately.  However, the good Captain then had an attack of the vapours [i.e. one of Doctor Demento's mind blasts got through to him] and by the time he had recovered from that it was too late to complete that plot point successfully. 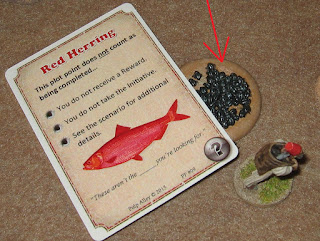 The Mummy's scarab beetles approached another Arab with a view to carrying him off for a terrifying questioning by their boss at a later stage.  Only here's the thing: this "digger" was also a scarecrow, a poorly-dressed imitation of a real man.  What on earth was going on?  [No, seriously - there aren't many Red Herring cards in the rewards deck, so how did we manage to draw two of them so close together?].

As the end of the game approached, the Mummy decided to stop the Zorgl who was trying to make off with the truck.  The undead lord ignored the other nearby squabbles (Tintin vs a Zorgl, Idaho & Indiana vs a Zorgl) and instead marched towards his chosen victim.

Firstly, he moved close and issued the Mummy's Curse [because otherwise that turn he'd have had to charge the closest enemy - Tintin].  The curse incapacitated the Zorgl temporarily; when the creature stood up again at the end of the turn, the Mummy charged into combat and felled the hairy beast [he used a "Finish It!" fate card to make certain that the Zorgl wouldn't just get back up].

Incredibly, the Mummy took some hurt himself from this encounter! 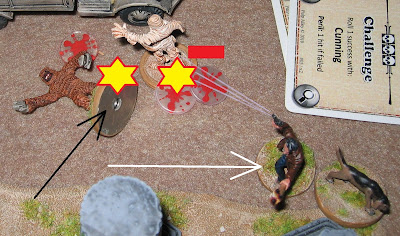 Idaho and Indiana backed away from the remaining Zorgl, freeing it up to attack the Mummy.  Between this melee and Idaho's shooting, the Mummy took another hit and started to look a lot less tough than he had before.  Importantly, this had preventing him from reaching the truck door - so far. 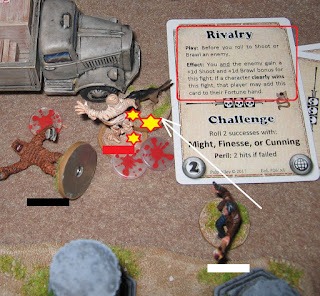 Sensing an opening, Idaho set his dog on the stumbling Mummy; if Indiana could just clear the enemy out of the way then Idaho would have one chance to reach the truck.  He even made the fight a bit more vicious by playing a "Rivalry" card - but nothing came of it.  The bloodhound and the reanimated corpse remained locked in combat with neither side prevailing.  There was no way past for the archaeologist to claim the prize. 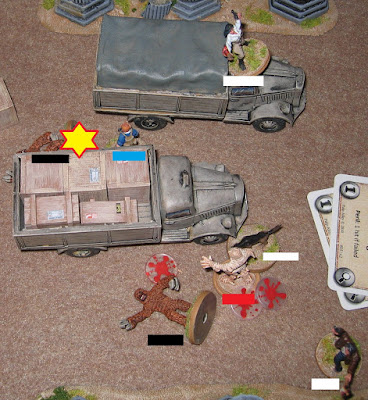 Marion Allen had managed to start up the second truck, though she hadn't yet had time to move it and achieve the rest of her plan (to block the laden truck & prevent it from leaving).

Finally, there were only two characters left to activate in the very last turn of the game.  The last Zorgl attacked Tintin, but this time the young man fought back.  He slammed its head against the side of the vehicle and the monster slumped down, temporarily unconscious.

That left Tintin as the only character still to have a go in the last turn of the game.  So far, his league had failed to claim any objectives, but he now had a clear route to the truck.  That's a major objective; if Tintin could claim it then the 3 victory points would be enough to win the game.  No other league had more than 2VP at this point... 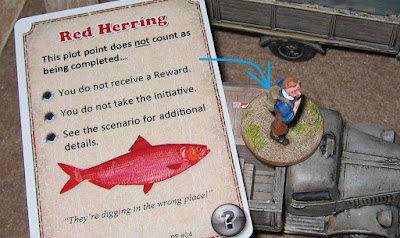 Nothing could stop Tintin now!  He leaped into the truck and looked for the button to start the engine.

The truck's controls were smashed and broken.  Glancing behind him, Tintin could see that all the crates and boxes in the rear were empty and torn.  The whole thing was a setup!  But who had known they were coming, in order to populate such a ruse?  And why?

[Another Red Herring?  What are the odds of that?!   Hmm, it looks as if there is more to this than meets the eye...] 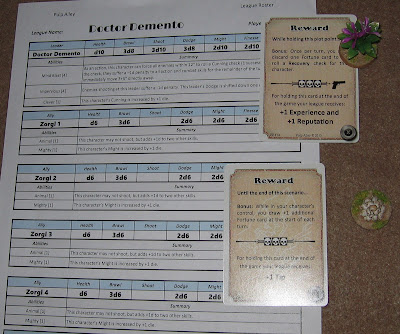 It's a tie for first place!  Doctor Demento achieved 2 plot points (the purple orchid and the pile of skulls)... 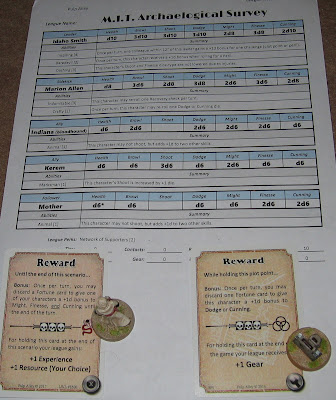 ...and Idaho Smith also had 2 minor plot points (the luggage and an Arab digger - a real man rather than one of the scarecrows used to confuse everyone else). 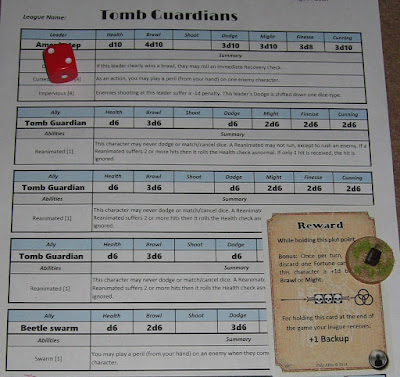 The Mummy's crew had just a single plot point (the radio)

Lastly, Tintin and his followers didn't achieve any plot points at all.

That was a thrilling game, but with a totally unexpected twist at the end!  Of the 8 minor and 1 major objectives, only 5 minor plot points were achieved.  3 of the rest were Red Herrings; the final minor plot point was not attempted successfully.  It seems that there are other forces at work here.  Perhaps those mysterious central Europeans who set up this dig aren't all they seem?  But then what are they trying to achieve?

Zorgls are tough!  They passed every single recovery roll that they made; if they were knocked down then they just got back up; I lost count after 5 recoveries in a row.  At 50% odds, you'd think they would fail some of these rolls occasionally, but in this game the only time a Zorgl was knocked out permanently was when someone played a Fate card to prevent it from even making a recovery roll.  Something very similar happened in the last game too [and this is how reputations born...].

Maybe another game is needed to settle this once and for all?!
Posted by Colgar6 at 19:10