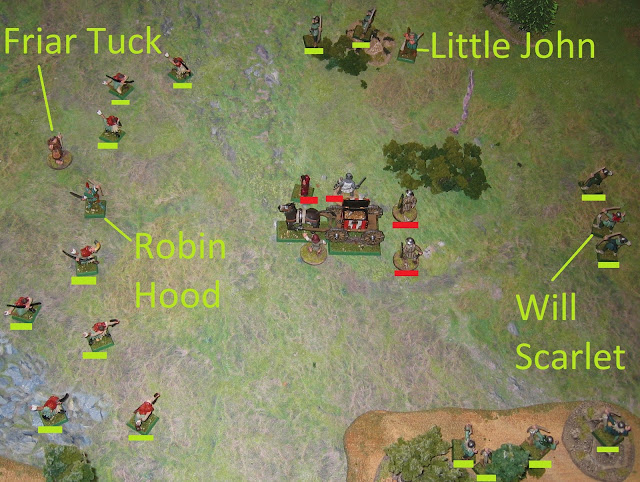 Time for another 4-player game at the Helensburgh games club.  This week it's a large Song of Blades and Heroes game, with 2 players on each side.  So..

Robin Hood and his merry men have learnt that a particularly noxious tax collector will be carting his ill-gotten gains near the forest.  It's an easy place for an ambush and the outlaws have never been known to pass up an opportunity to strike at the oppressors of the poor. 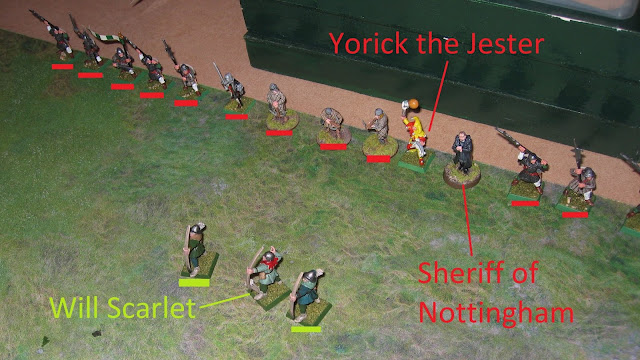 Of course, it's a trap!  The Sheriff of Nottingham and his forces close in from one side...

...whilst Guy of Gisborne leads more knights and men-at-arms in from the other side.  Can Robin and his men escape?  If they do, can they take the treasure cart with them?  What do you think?

The 2 (4?) forces quickly formed a confused melee, so I won't attempt to describe all the ebb and flow of the battle.  Rather, here are some little vignettes:

The Sheriff's side lost most of their big men/named characters very early in the game and I think we all believed that the outlaws would then find it easy to escape with the loot.  Nothing could be further from the truth!  Interference from multiple minions (including the heroic last man of the caravan guard) prevented Robin's men from moving the wagon until fairly late on.  Even then, it was pursued with vigour and could have been recovered, if a few die rolls had gone the other way.

Once again, the players all got into the spirit of the game and (I hope) enjoyed it thoroughly.  There was heroism, skullduggery and a finely-balanced finale - what more do you want?!
Posted by Colgar6 at 06:24