I've played a few games of SAGA before (most recently, here), but this time it's different.  At least, it's slightly different, as we recently played our first game of SAGA Version 2.

There are a number of differences between v.1 and v.2, though overall the game is much the same.  Others have reviewed these changes in depth, but here are some of the more obvious alterations:
Overall, I think these changes make everything simpler and more consistent, but we have only just scratched the surface in terms of gameplay...

So, nothing terribly subtle here.  We lined up 6 points of Vikings vs 6 points of Anglo Danes and threw a couple of terrain pieces on the table, then set to. 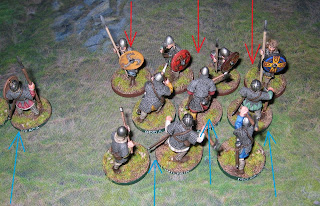 My Anglo Danes had fewer men overall than the Vikings, but more of them were armoured.  With that in mind, my central hearthguard charged forwards, whilst my warriors tried to avoid the Viking berserkers who were running a long way around a flank. 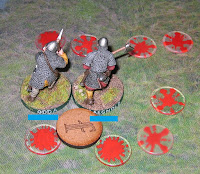 The initial clash between these well-trained & motivated fighters and their Viking equivalents was...bloody. 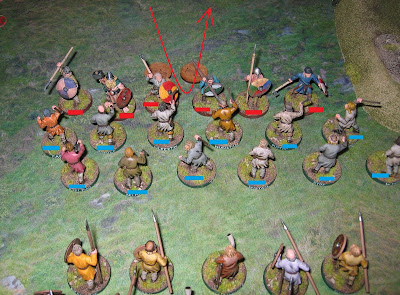 Elsewhere, a group of Viking warriors struggled against some unusually feisty Anglo Dane levy, who first dropped several of the Vikings with sling shots and then saw off the warriors' charge with minimal loss. 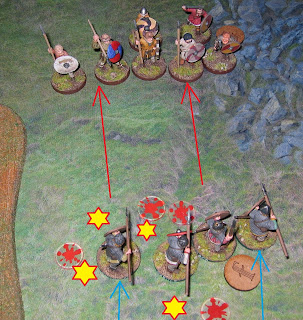 The remaining Anglo Dane hearthguards fought a war of attrition with a slightly larger group of Viking warriors.  Over a series of clashes, each side would win their charge and cause a small number of casualties, only to be driven back in turn when the other side counter-attacked.  Neither group was prepared to admit defeat and eventually they pretty much wiped each other out. 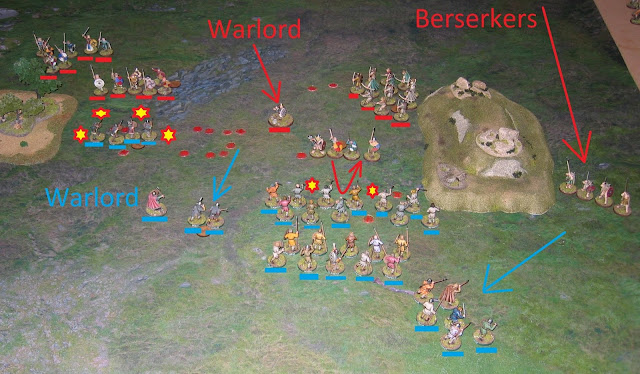 So, after a few turns, the situation was thus: 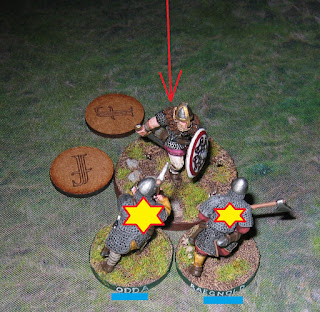 Seeing a remnant of the axe-wielding Anglo Dane hearthguards retreating, the Viking warlord charged through the middle of the battle and cut them down.  This was brave, but left him tired and horribly exposed! 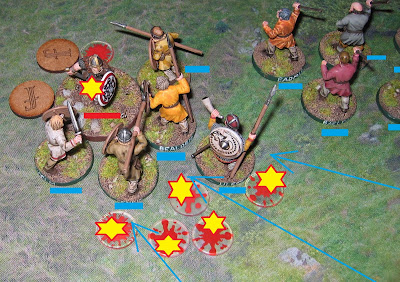 Vengeful Anglo Dane warriors from their second line swarmed all around the solitary Viking hero.  He fought to the last, taking 5 of the attackers with him, but the odds were just too great and the Viking leader fell to a well-aimed spear thrust. 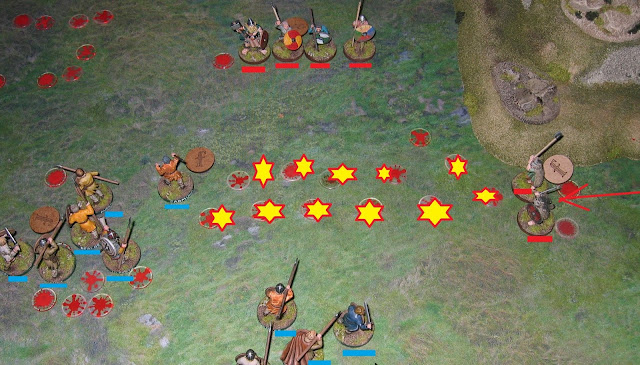 Finally, the Viking berserkers arrived.  They charged into the Anglo Dane slingers and slaughtered them, leaving just one shocked man from the levy.  This wasn't without loss though: 2 berserkers fell as well. 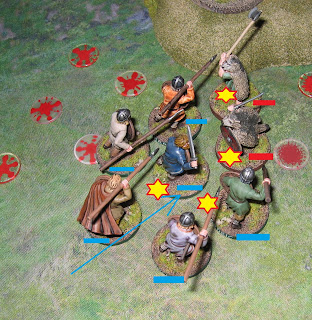 In yet another tit-for-tat move, the reserve Anglo Dane warriors now attacked the depleted group of berserkers. 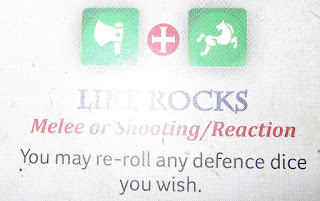 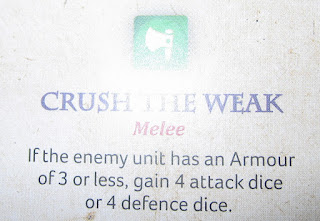 Knowing how dangerous these frothing loonies could be, the Anglo Dane warriors were boosted by a couple of battle board abilities: Like Rocks and Crush the Weak.  Despite this, they still lost two of their own number before they killed the remaining Vikings. 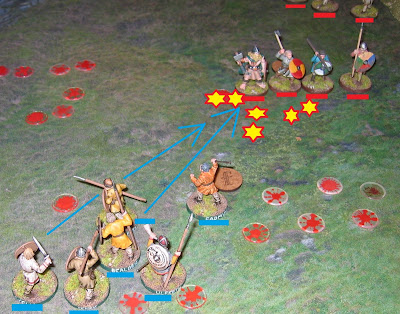 So, one more fight before the end of the game?  Anglo Dane warriors declared a charge on a slightly smaller group of Vikings. 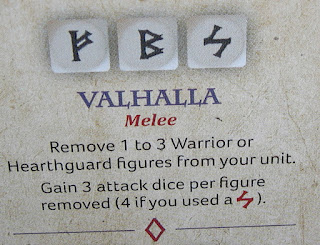 Despite one of the Vikings declaring "Valhalla!", the defenders were wiped out.  The few remaining victorious Anglo Danes were promptly shot down by the nearby Viking archers. 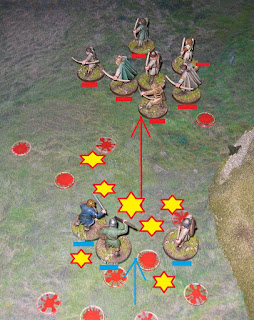 Having finished off the berserkers, the last group of Anglo Dane warriors then assaulted the Viking archers.  The archers had the worst of it, though the slaughter was high on both sides. 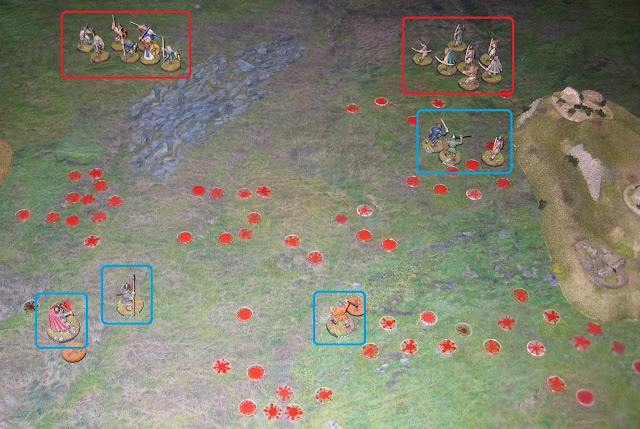 At this point, the turn limit for the game was reached.  As you can see, there weren't many survivors!

We counted up the "slaughter points" for casualties caused and it turned out that each side had exactly the same number!  But wait - bonus slaughter points are also awarded for entire units destroyed:
Thus I declare that it was a (very) narrow win for the Anglo Danes, who have managed to drive off the seaborne invaders and defend their lands from pillage and ruin!

This game took just short of 2 hours, which wasn't too bad considering that we were learning and still referring to the rulebook on a number of occasions.  We had enough time to reset and play a second game; this went much more quickly (and led to a climactic battle between the two opposing leaders, where the Viking was ultimately cut down by the heavily boosted Anglo Dane hero ("Lord of War" is a very powerful ability for this type of duel 😃).